The Evil Eye in Greece - Fly Me To The Moon Travel 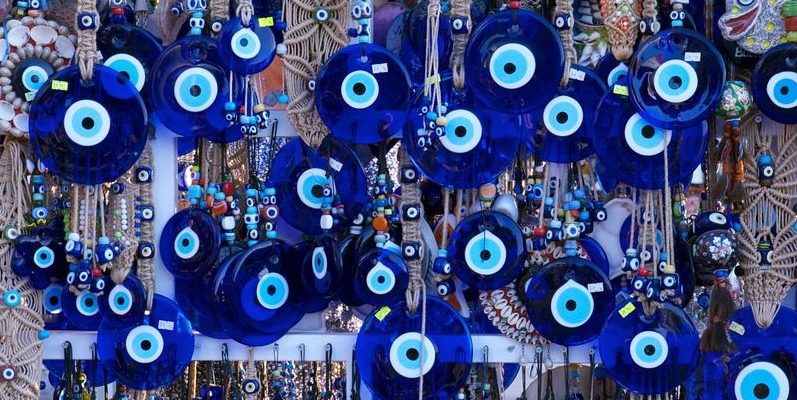 When visiting Greece and browsing the wall hangings in shops or noticing necklaces and bracelets, you may take notice of a big blue eye design staring back at you. It’s called the evil eye and its used in décor, as jewelry and in art. Here’s why it’s everywhere…

So why is this blue eye so prevalent in Greek culture, so much so that it has become a popular souvenir?  In Greek, it is called the mati, and it is the most common ancient superstition or belief. The evil eye is brought upon someone by a person who is envious or jealous. In other words, your good fortune is affected by someone’s jealousy so some sort of bad luck may happen to you as a result, like feeling bad physically or psychologically.  Perhaps someone gave you a complement on your new hair cut then an hour later you get a splitting headache. Perhaps someone complements you on your beautiful skin and then a day later you get a huge pimple on your nose. Greeks would tell you it was the evil eye.

When it comes to the evil eye, some eyes are more exceptional than others. In the Mediterranean region, light-colored eyes are considered rare, so those with blue eyes are thought to “give the eye” more readily.

Evil Eye in Culture and History

In Greece, the belief in the evil eye dates back to Classical antiquity. Alexander the Great also spread the idea across his empire.  However, the evil eye was first recorded 5,000 years ago on clay tablets in Mesopotamia.  The evil eye is so prevalent that it exists in some form in the Jewish, Christian, Muslim, Buddhist and Hindu cultures.  Here are a few ways different cultures believe in the evil eye. Ward off the Evil Eye in Greece

There are ways to prevent the negative repercussions of an unexpected evil eye! Many Greeks will attest to them. Greeks who believe in the evil eye prepare themselves by wearing blue eye charms or blue beads to reflect the evil away. Some Greeks, believe that an expert in xematiasma can recite a special prayer to release the negative effects of the evil eye. The evil eye is incorporated in various life changing traditions in Greece. At Greek weddings, the bride may add a touch of blue to her outfit or wear a mati in her jewelry to ward off evil-eye jealousy.  Also, it is said that new Greek mothers should stay inside for 40 days after her baby is born because nature will envy her for giving birth. When the baby is out for a stroll with mom or dad, a Greek person may compliment the beauty of the baby but then “spit” on it after the compliment. It’s called spitting but it is more like shooting bursts of air on the child while making a “ftou, ftou” sound. This action is intended to ward off any misfortunes and prevent the evil eye from affecting the baby.

Whether you are a believer or not in the power of blue or spitting, the evil eye can be appreciated in other ways as it is beautifully presented in Greek art and jewelry today. Have you ever heard of the evil eye in Greece or some similar belief from any place else in the world?

Tags: evil eye in Greece, fly me to the moon travel, Greece, luxury travel experts
Previous Article
Next Article
This website uses cookies to improve your experience. We'll assume you're ok with this, but you can opt-out if you wish. Accept Read More
Privacy & Cookies Policy