One of the proudest National Holidays of Greece has an unusual name. It usually goes by that date, but it is also called “Ochi” day – “No.”  The history of October 28th and the celebrations surrounding the holiday offer a precious glimpse into the Greek soul.

Greek culture is famous worldwide for its hospitality, for its warmth, and for the way it embraces the joy of life. But many visitors to Greece never get deeper than this very appealing surface. These national celebrations afford the opportunity to experience and understand Greece more fully. The culture of modern Greece is truly founded on something much more substantial – on valor, bravery, and virtue. The role Greece played in WWII provides compelling evidence of the excellence of the Greek character. 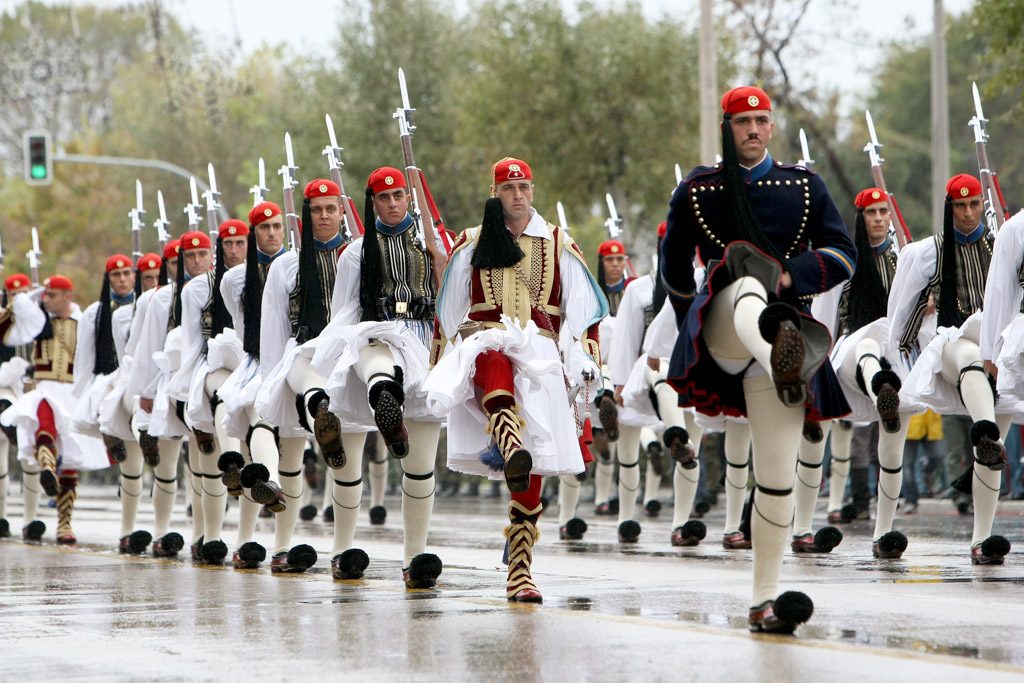 The holiday celebrates Greece defiance of the Axis powers in WWII, and the country’s entry into the war. “Ochi” was the answer that the Greek Prime Minister Ioannis Metaxas gave to the Italian Ambassador when he issued Benito Mussolini’s the ultimatum that Greece permit Italian troops to enter the country and take up strategic locations.

The “No” of Metaxas expressed the passionate feeling of all Greeks, echoed in the streets and throughout the land – “No” to facism, “No” to occupation. Italian troops were already occupying Albania, and invaded Epirus, in the north of Greece, on October 28th, 1940. The Greek troops, skilled in fighting in this rough and mountainous territory, succeeded in pushing them back. Not only that, the Greek troops even succeeded in a counter-offensive, venturing into occupied Albania.

Many feel that Greece’s bravery may have changed the course of the war. It was ultimately necessary for the Germans to occupy Greece, which diverted their resources, and delayed their invasion of Russia, which led to their eventual defeat.

Greek valor was recognized by allies and enemies alike.

Today, this is one of two major National Holidays celebrated in Greece. The other is March 25th – Independence day. This holiday commemorates the founding of independent Modern Greece, free after centuries of Ottoman rule, in 1821.

The Two Glorious Holidays of October

This is a wonderful season to visit Greece, and especially northern Greece. For, two days before “Ochi” day is the feast day of Agios Dimitrios – October 26th. Special among the feast days of Orthodox saints as celebrated throughout Greece , the feast day of St. Dimitrios is also a holiday of national, military importance

If you are lucky enough to be in Thessaloniki in the hour before dawn on the 26th of October, you may wake to the triumphant sound of a military marching band. They are not warming up for “Ochi” day though – they are commemorating the liberation of Thessaloniki. Modern Greece was liberated from centuries of Ottoman rule in two phases: the southern part of the mainland became free in the Greek War of Independence in 1821, and then the “New Lands” – the northern part of Greece and many of the islands – joined modern Greece in 1912. 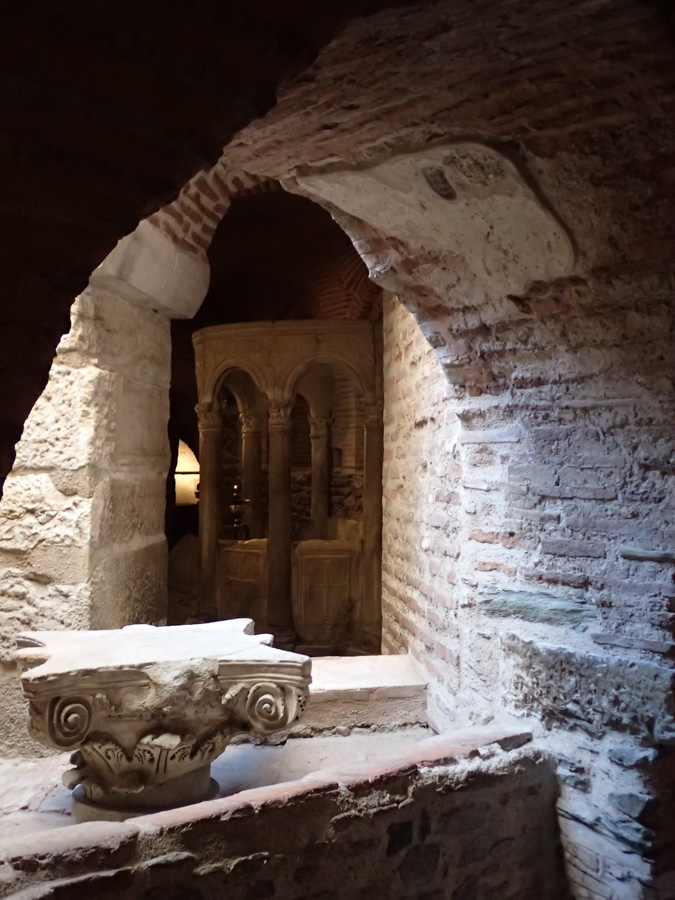 Agios Dimitrios – the patron saint of Thessaloniki – was a military saint. He was a high ranking officer in the Roman army, and also a missionary for Christianity. When he proclaimed his devotion to Christ, Emperor Maximillian had him captured and taken to the prison in the bath house – now the crypt of Agios Dimitrios church.

Many people go to the church of Agios Dimitrios to pay their respects. And of course, there are many men and boys named Dimitris and girls and women named Dimitra in Thessaloniki – it seems like half of the households in town are enjoying a name-day celebration.

Both of these events – the liberation of Thessaloniki and the day that Greece entered the second world war – are celebrated by schools in the days before. Of course, schools are closed on the holidays themselves, so that the children can go to the parades. 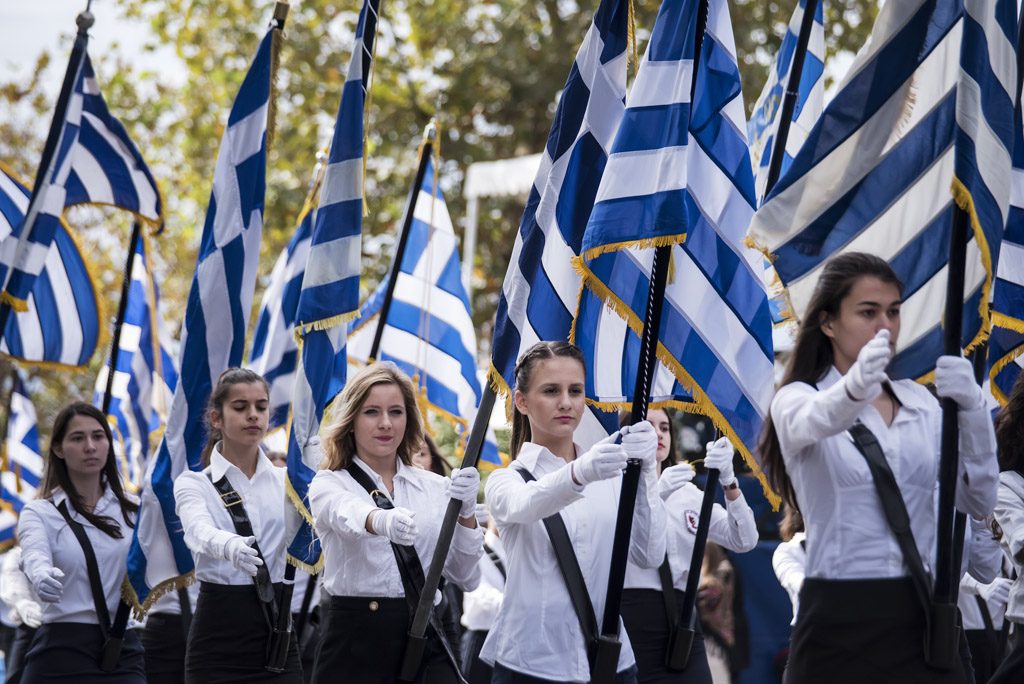 In Thessaloniki on the day of Agios Dimitrios, and in Athens on “Ochi” day,  school children parade in uniforms of blue and white, the colors of the Greek flag. And who carries the flag itself during the parade? That honor goes to the best pupil of the year from each school.

Younger pupils celebrate in school. All children are acquainted from an early age with the brave deeds of their forefathers through plays, poems, and songs. On the day before the holiday, the schoolyard fills with circles of children dressed in blue and white, performing traditional dances.

The weather is usually glorious in late October – crisp, cool days with blue skies, and leaves blowing in the breeze. Early in the morning, people assemble for the parade. Ochi Day is a celebration not just of the bravery of the Greek people, but also of their culture. 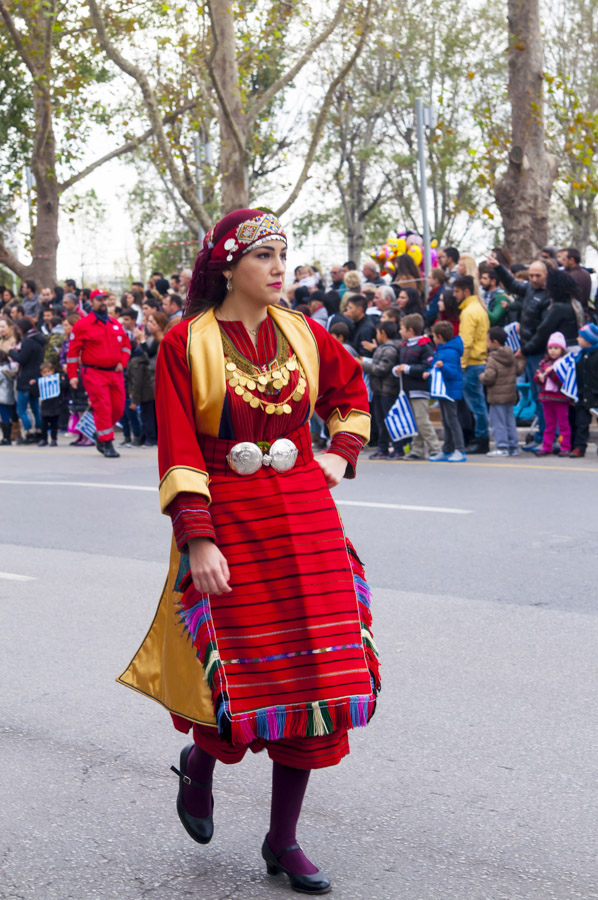 Besides the school children parading, there are also cultural groups. Each region of Greece has its own traditional costumes, and music and dances. These societies, dressed in their splendid costumes, also parade. It is a wonderful opportunity to enjoy the great variety of traditional dress.

Then the armed services of Greece parade. The military cadets in dress uniform march, and also all of the special units. In Thessaloniki, boats from the navy come to the harbor. The tanks of the army fill the surrounding streets with a low rumble as they, too, join the military parade. Skilled air force pilots fly in precise formations overhead, and military helicopters also. It’s an exciting spectacle.

This is also the time that Greeks honor the bravery of all the emergency services and rescue teams, the mountain rescue, fire fighters, coast guard, first responders, and others that dedicate their lives to the safety and protection of others.

A highlight of the parade has until recent years been, of course, the veterans themselves. In some communities, there is still the opportunity to honor elderly veterans of WWII, a moving experience.

Of course, after the parade it’s time for a grand family lunch or a festive afternoon with friends in a traditional taverna. On October 28th, the Mediterranean zest for life takes on new meaning. It’s not just that Greeks love to celebrate – and they certainly do – but they also have something to celebrate.