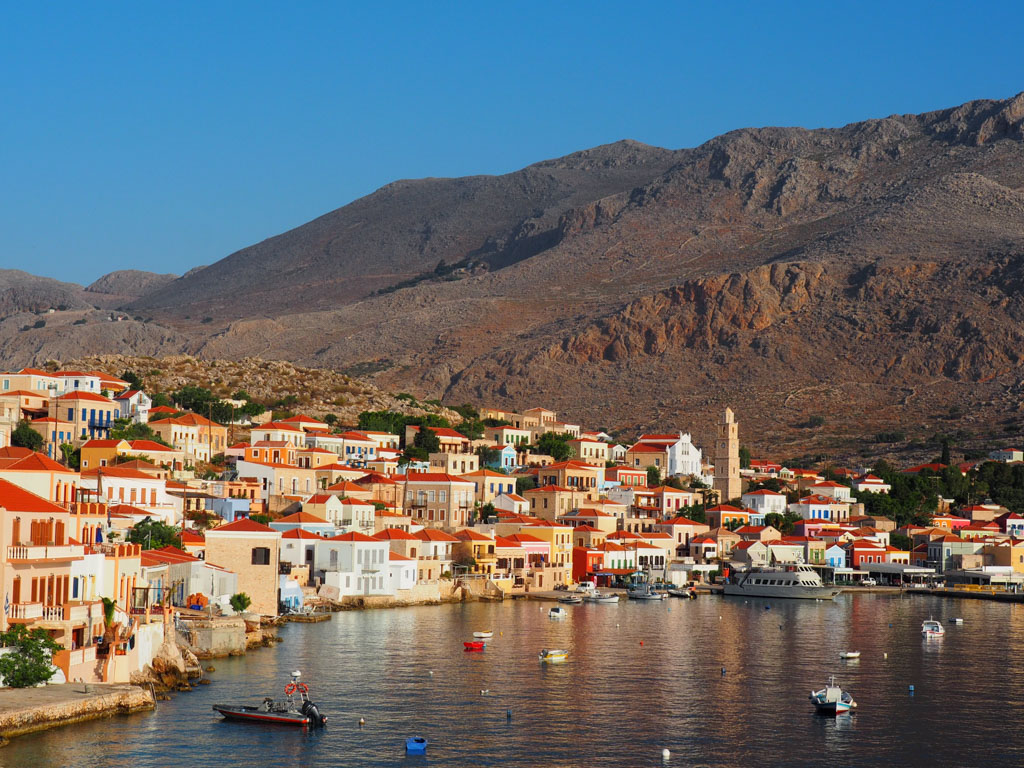 Many visitors to Greece, particularly first-time visitors – are lured by the magnetic pull of the most famous of the islands, like Santorini, Mykonos, and, in the Dodecanese, Rhodes. The hype is completely justified – these blockbuster islands truly deliver. But with so many other visitors circulating, the low-key, authentic charms of Greek Island life may prove elusive. The lesser-known islands are often the insiders’ prime choice.  And, besides a true taste of island life, they also offer significant sights, historical perspective, and spectacular (and less-crowded) beaches. Chalki, easily reached from the much more famous Rhodes, is just such a place. 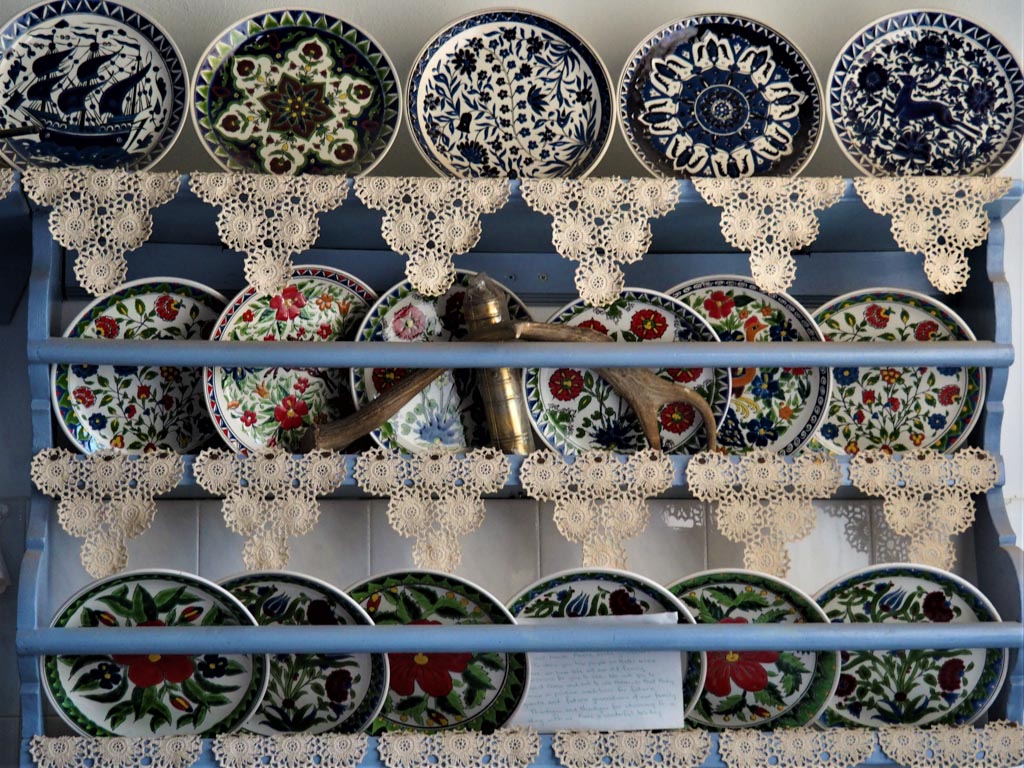 Chalki – A Name Rich in Meaning

Literally rich: “Chalki” – also called “Halki” and pronounced with  heavy “h” (as in “Challah”) – means copper in Greek, and copper mines thrived here in ancient times. The island also had wealth from the production of “porphyri” – the reddish purple pigment derived from the murex snail, a textile dye of great value in the ancient world. Its price is said to have been far greater than that of gold at one time. 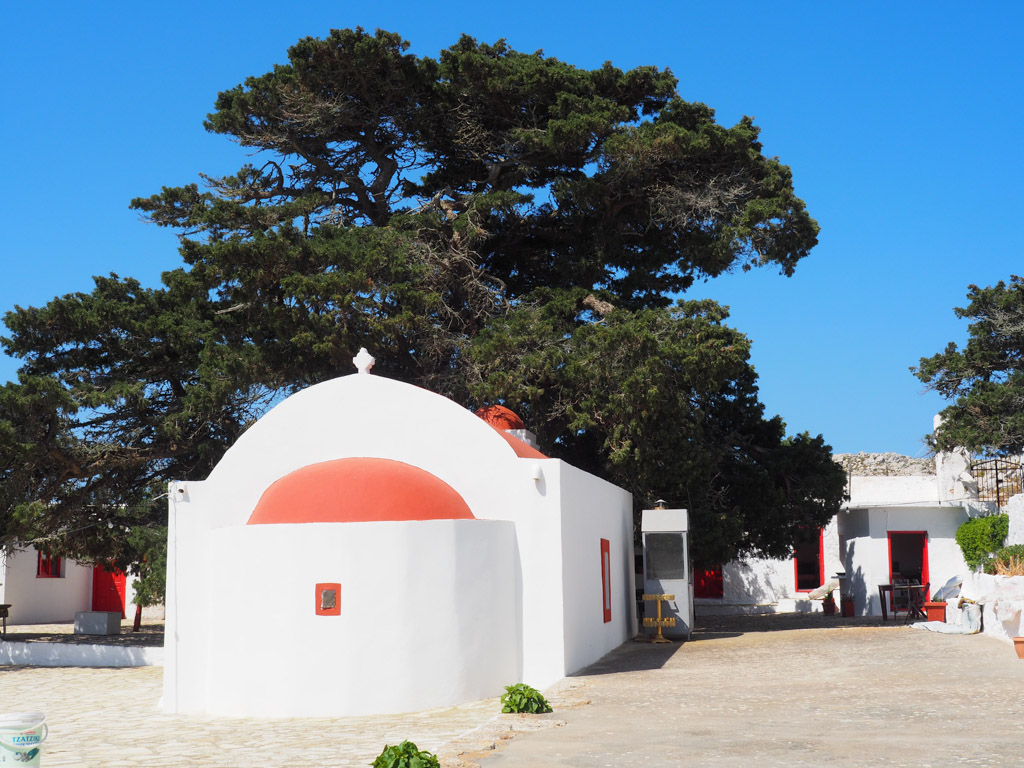 The more recent manifestation of Chalki’s prosperity is seen in the dazzling architecture. Chalki, along with Kastelorizo, Simi, and Kalymnos, became wealthy through the trade in natural sponges during the 19th century. They used their prosperity well – not only in the construction of these neoclassical mansions, but also in education and culture.

The Knights of St. John on Chalki

Of course all visitors to the Dodecanese are familiar with the legacy of the Knights of St. John – known  well as the Knights Hospitaller, a Catholic military order previously headquartered in Jerusalem that became the Knights of Rhodes for two centuries, from 1310 to 1522, heroically defending the Dodecanese against the Ottoman invaders 100,000 strong. 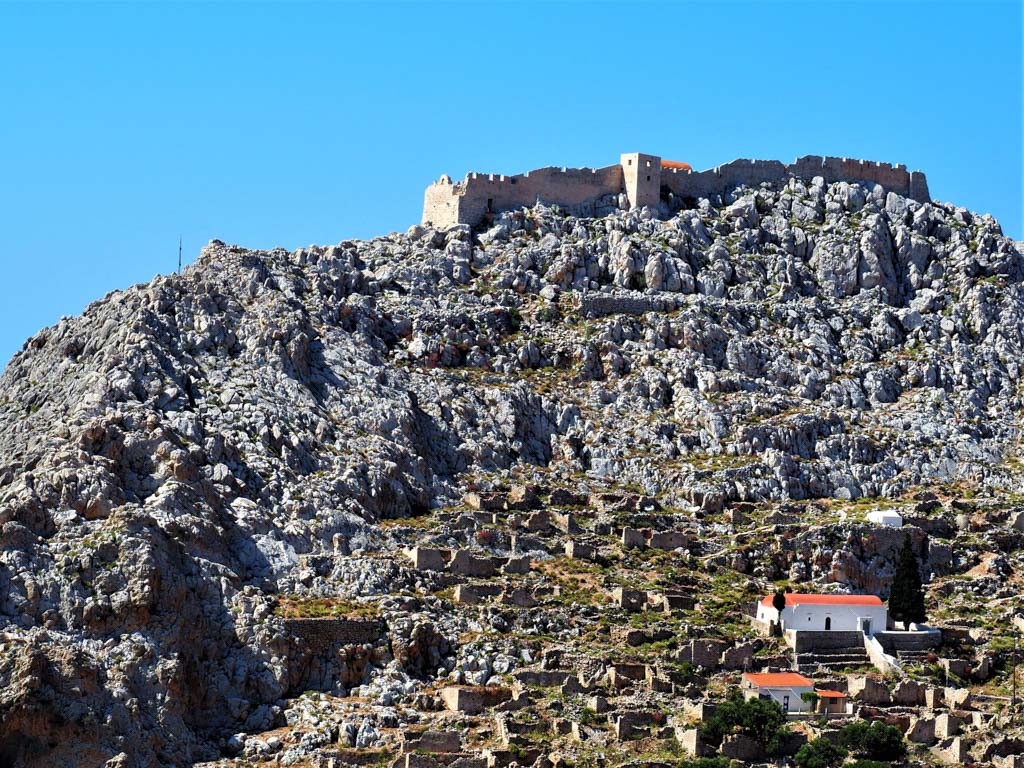 Just 7,000 Knights held them off in a six month siege, earning the Grand Master the title Defender of the Faith, as well as the respect of Suleiman the Magnificent. Best known on Rhodes for the Palace of the Grand Master, the Knights of St. John were also here in Chalki, building a splendid fortress on a hill that is now in a picturesque state of ruin. Nearby, the lovely temple of Agios Nikolaos boasts grand frescoes of the 15th and 17th centuries.

The Chorio of Chalki in the Times of Piracy

The whole of the Aegean was a dangerous place for centuries, as pirates ruled the seas and pillaged island towns. This is why so many of the island villages are built not at the shore by the post but on high ground, for defense. “Chorio” simply means “village” in Greek, but it is often the name of the main town of an island. Chalki’s old Chorio, with its marvelous traditional old stone houses built by the fortress, gradually became uninhabited over the years. The ruins whisper of the days of the knights and the seas teaming with pirates. 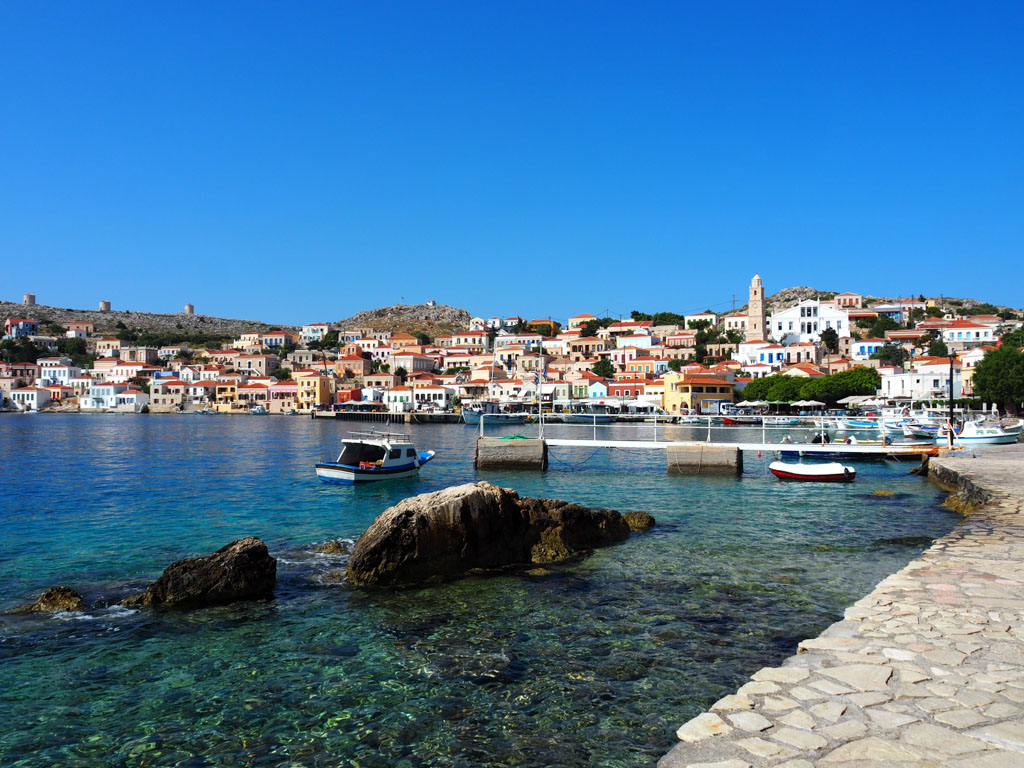 The main town of Chalki today is an aristocratic port town awash in soft warm hues and rich in elegant detail. “Emborios” means “merchant” in Greek, and Nimporio is therefore the commercial center, and the center for culture and town life. Ascending the hillside and curved around the harbor, the lovely homes are on beautiful display, making this one of the finest neoclassical towns of Greece.

The Beaches of Chalki

Of course, an island get-away is not complete without a superb beach experience. Of Chalki’s many pristine beaches, the most famous is Pontamos, renowned for its fine white sands. Pebble beaches Kania, Ftenagia, Giali, and Areta all feature gorgeous waters of a beguiling shade of blue. Or something even more remote, there is Trahia, reachable only by boat. There is also the possibility of a day trip to the tiny islet of Amilia, located between Chalki and Rhodes, with more dazzling beaches.

These drier islands of the Dodecanese have had to be enormously resourceful, and the result is some truly special cuisine. In addition to the fresh-caught wealth of the seas, one can enjoy divine local artisanal cheeses, hand rolled fresh macaroni, wild herbs of intense fragrance. These are tastes worth traveling for: a cuisine of love and hospitality that is not soon forgotten. 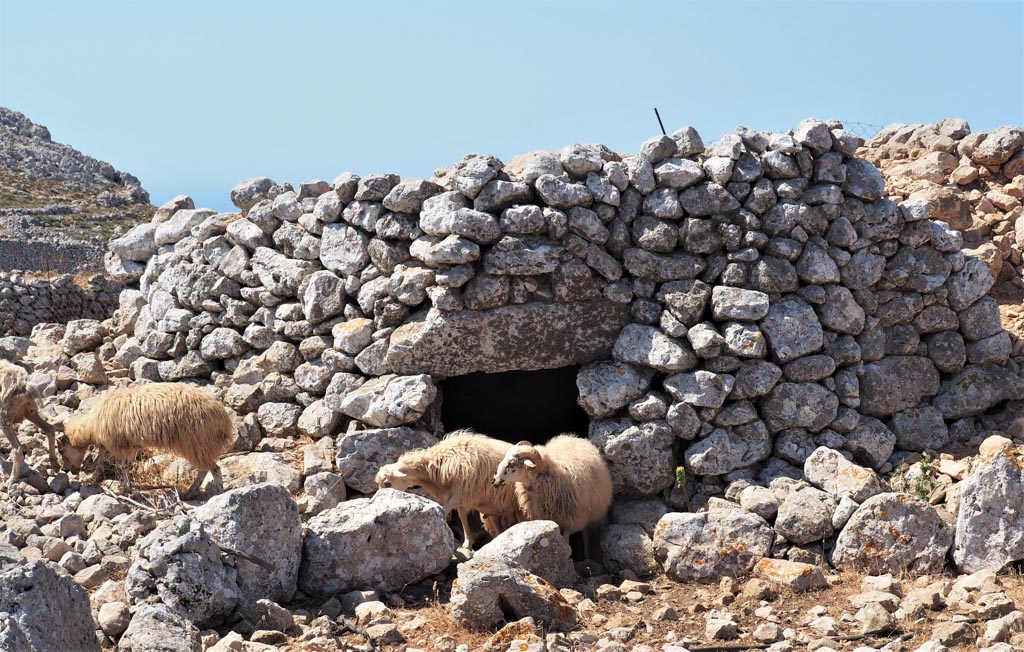 Have you been to any of Greece’s lesser-traveled and more remote gems such as Chalki? The rewards of traveling slightly off-grid – but of course with excellent food and beautiful accommodations – can be extremely rewarding. 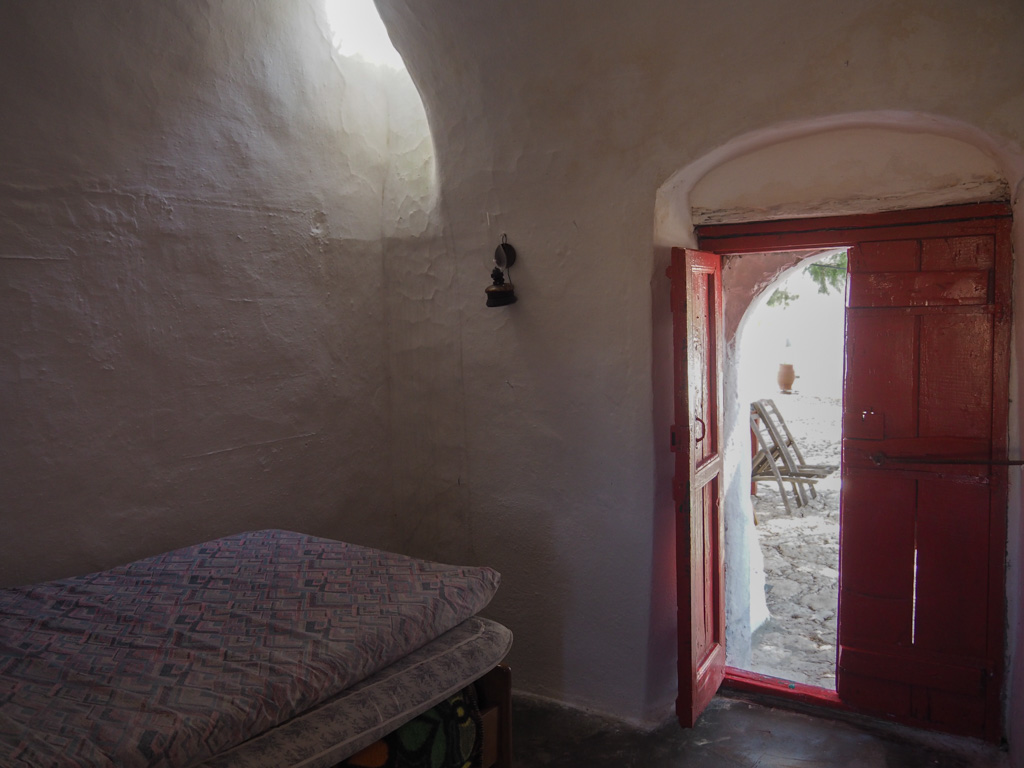