The Ionian Islands are a very special part of Greece, with their own distinctive character. Full of hidden, jewel-green coves and secret beaches, and tiny uninhabited islands, the Ionian Islands and coast make the ideal destination for a yachting holiday. This is the perfect place to discover your own private Greece.

What Makes the Ionian Islands Special

The Ionian Islands are known for their lushness. It’s refreshing just to look at them. These emerald green islands have beaches lined with trees, and pristine seas all around.

Culturally, the Ionian Islands are special. They have a unique and fascinating history. While the other side of Greece was under Ottoman rule for centuries, the Ionian Islands belonged to the Republic of Venice from the 14th century until the end of the 18th century. After that, they were taken briefly by the French, then belonged briefly to the Septinsular Republic, until finally being a protectorate of the British, in the form of the United States of the Ionian Islands, for much of the 19th century, until they finally joined Greece in 1864.

This has given the Ionian Islands a completely different flavor from the Islands of the Aegean. There is a certain elegance felt in the elaborate Italianate architecture. The influence of the Venetian centuries is still felt in the refined cuisine of the Ionian Islands in dishes such as bourdeto – fish napped in a savory sauce, and sofrito – tender veal cutlets in a sauce of white wine.

The British decades also left plenty of glamour, including the Palace of Mon Repos on Corfu – the birthplace of Prince Phillip. Years later, it was home to the young Lawrence Durrel with his mother and siblings.

Exploring the Ionian Islands on a Yachting Voyage – The Highlights 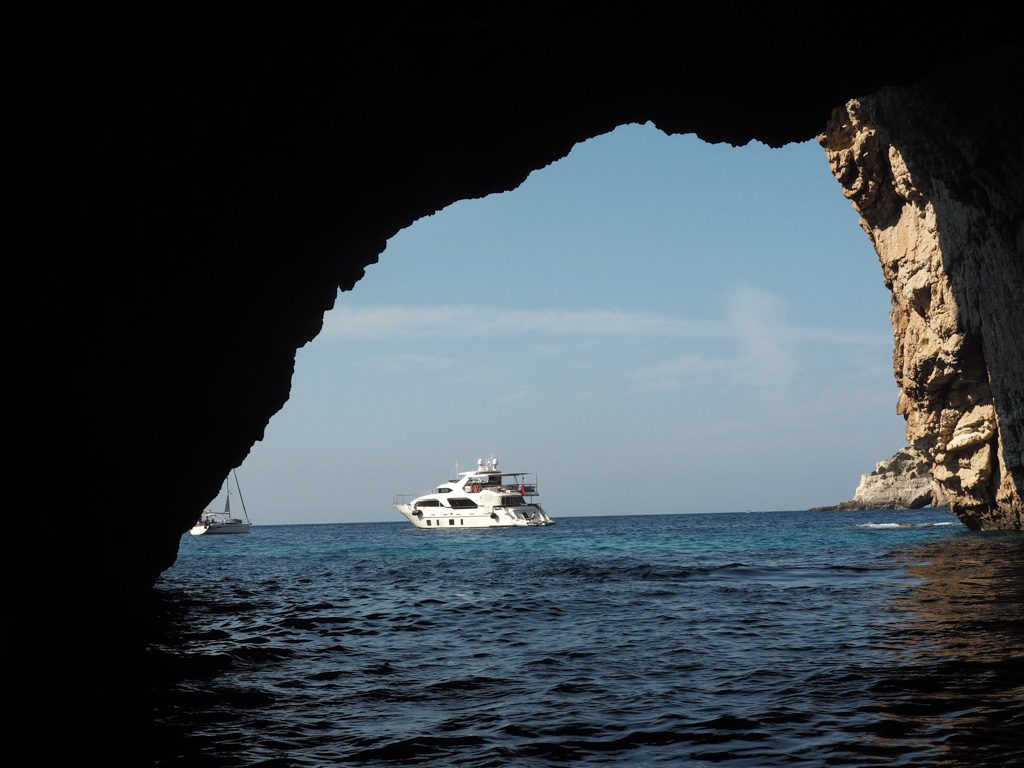 Getting to the Ionian is also magical. The journey begins with crossing the historic Canal of Corinth. In the 7th century BC, the Ancient Greeks created this canal to create a direct trade route with Sicily. It’s impressive for sailing here, with green banks on either side, and the modern, sculpturally beautiful Rio Antirio Bridge spanning the canal.

But before that, there’s a stop on a nearly secret island. There is a lively, tiny island in the Canal of Corinth – Trizonia. Free of cars, with just a handful of exquisite seafood restaurants and a couple of boutique hotels, it is easy to see why Onassis had his eye on it. But his offer was rejected – the locals were not willing to part with this miniature paradise. 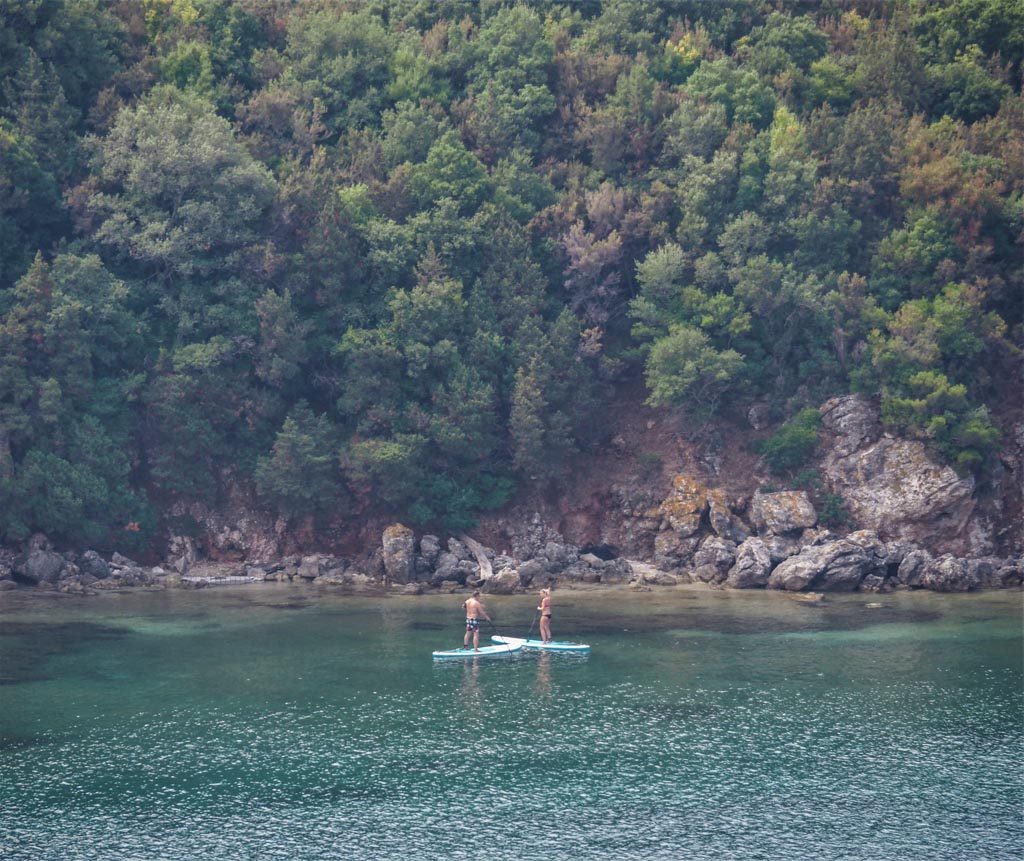 Can there be a more storied island in all of Greece? It was from Ithaki that Homer’s Odysseas set sail, and to Ithaca he returned in the Odyssea. This beautiful island belonged to the Roman Empire, then the Byzantine Empire. Subsequently conquered by the Normans, the Venetians, the Ottomans, then the British, it has a complex cultural legacy.

Today, Ithaki is famous for its tranquil atmosphere (it’s a popular destination for yoga retreats). Ithaki has spectacular beaches and enchanting traditional villages. 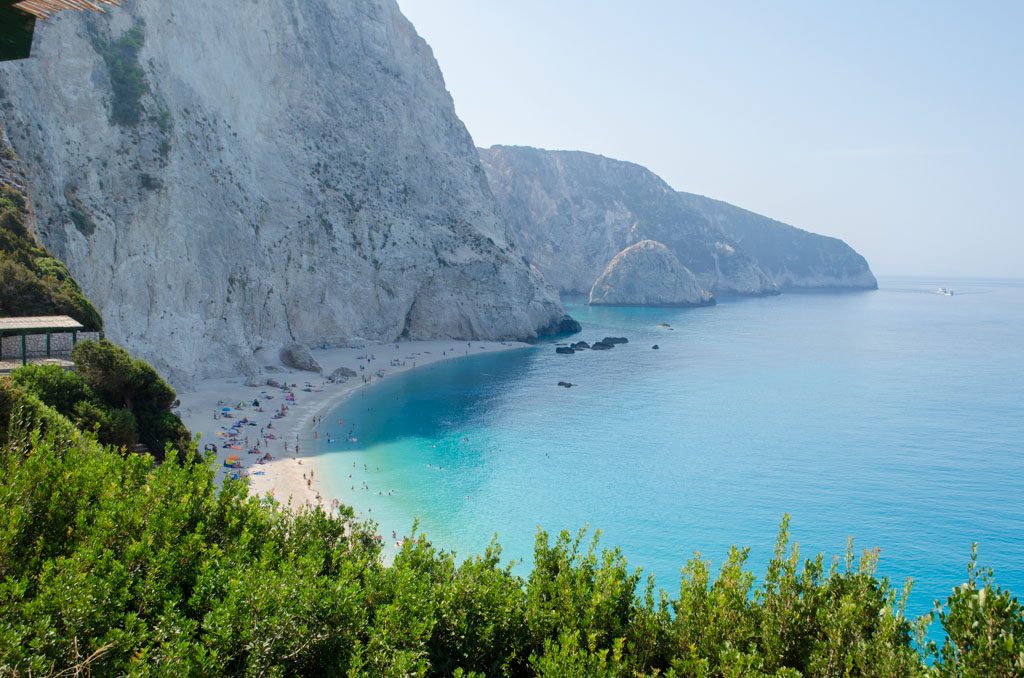 Green and luscious Lefkada has some of Greece’s most famous beaches, like Porto Katsiki with its stunning white cliffs, and the long and lovely Egremi with its silky white sands. On your luxury yacht, you can also explore the other tiny surrounding islands – Kalamos, Kastos, Meganissi. And you catch a glimpse of Skorpios, too – the island Onassis ultimately did buy as his private retreat. It is still a private island.

This gorgeous island is a natural paradise, famous for sightings of the beloved Caretta Caretta sea turtles, and the Monachus Monachus monk seal. The creatures of the sea have chosen this unspoiled gem as their habitat. Around the island, you’ll find dramatic limestone cliffs, alternating with beaches of astonishing loveliness. 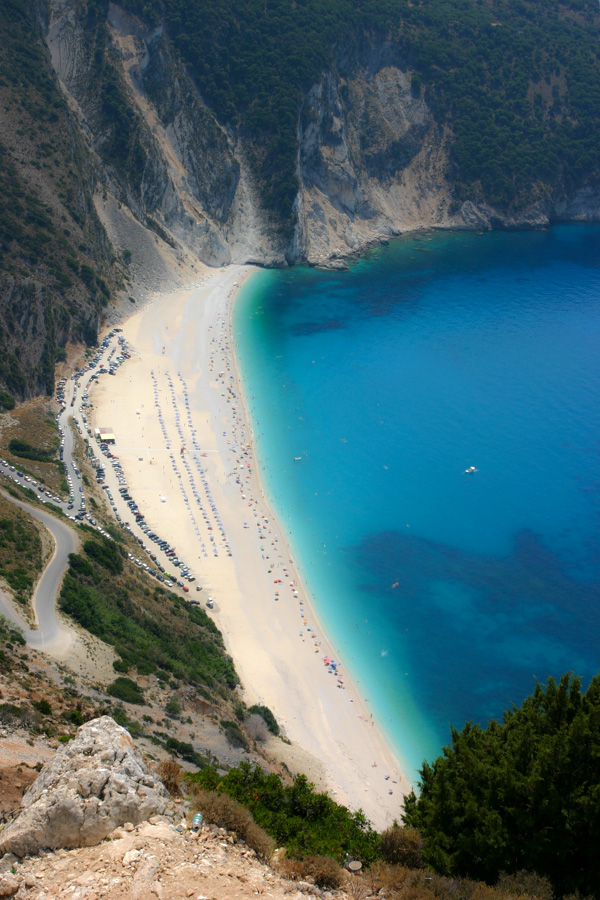 Many of the beaches are reachable only on footpaths, or – of course – by boat. The interior of the island is covered with fragrant pine forests and rugged landscape. While you are here, you can sample the delicious indigenous wine, Robola, and have some riganada with it – the Cepahlonian answer to bruschetta.

This pair of islands are the smallest of the Ionian group, with petite Antipaxos at five square kilometers the very smallest. Sometimes called Paxi, this tiny island group is the most unspoiled and uncommercial of the Ionian, while at the the same time maintaining a certain cache of sophistication – Paxi is definitely a destination for those in the know. 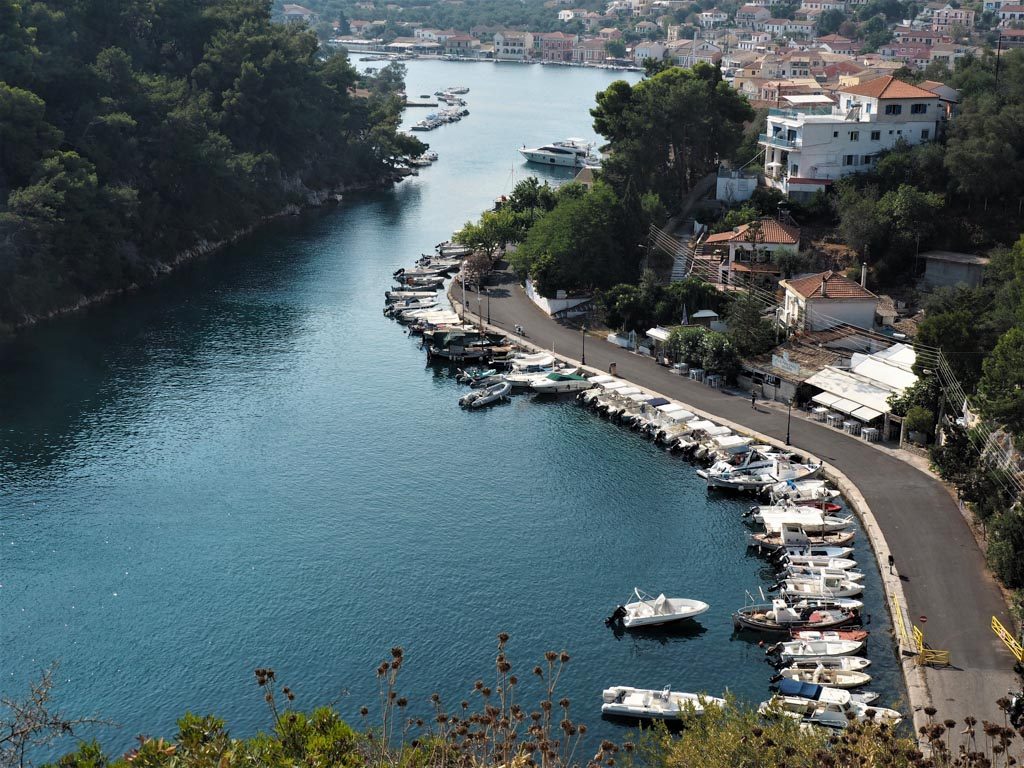 These two gorgeous islands are famous for their white chalky cliffs. The resulting white sands around the islands make for waters of deep and beautiful jewel tones. The white cliffs make a dramatic contrast with the seas and the green of the many olive groves of the island. Paxos is known for its Blue Caves – the cliffs have eroded in part, creating fantastic sea caves. This is one of the most exotic coastlines of Greece, a delight to explore by sailboat. Paxos’ capital, Gaios, is a charming traditional fishing port with true atmosphere. It is protected by two tiny islands – Agios Nikolaos and Panagia.

While Paxos has olives, Antipaxos has wine. Vineyards cover tiny Antipaxos, and the rich red wine they produce is famously delicious.

The Ionian Coastline – Sivota and Parga

The coast of western Epirus is hardly less exotic than the islands of the Ionian sea it looks towards. The vivid turquoise of the seas, the pristine beaches, and the verdant landscape have earned this exotic area the nickname “The Caribbean of Greece” 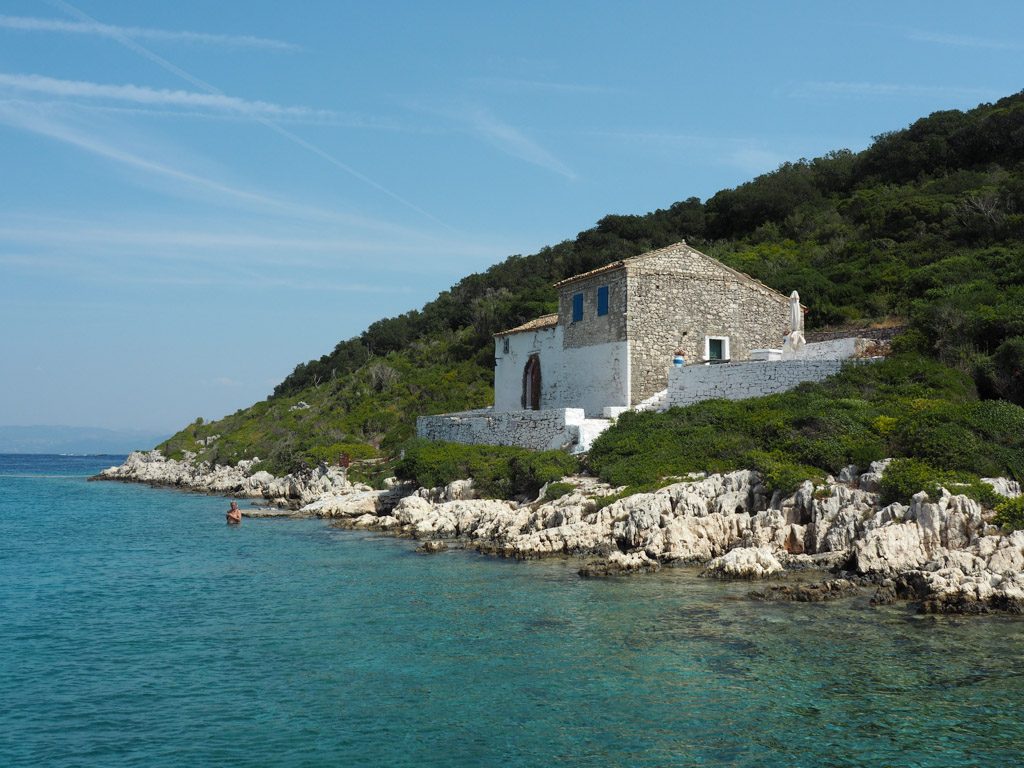 Syvota has another nickname, too – The Fjords of Greece, because of the dramatic sight of the green mountains sharply meeting the sea. Full of sheltered white sand beaches with calm waters and charming secret coves, the Sivota coast is an absolute delight to explore by boat, and so are the nearby tiny islets.

For the more adventurous, the river Acheron flows here to the coast, its mouth at the village of Ammoudia. It was across the Acheron river that the souls of the dead were ferried to Hades in the ancient world.

Parga is one of Greece’s prettiest seaside towns. It’s built on a curved slope like an amphitheater. The beautiful sight of the multicolored houses and elegant mansions rises above a picture perfect beach. The small cove of Parga is protected by a tiny island, as well as a Venetian fortress from above.

Exploring the Ionian Islands and Shore on a Luxury Yachting Cruise

The pristine beaches, unspoiled nature, and relaxed elegance make the Ionian Islands an ideal destination. With their distinctive cultural character and their unusually exotic coastlines, they are a delight to explore by boat. We will be happy to help you arrange one of the most luxurious and memorable holidays you can imagine – truly the voyage of a lifetime. 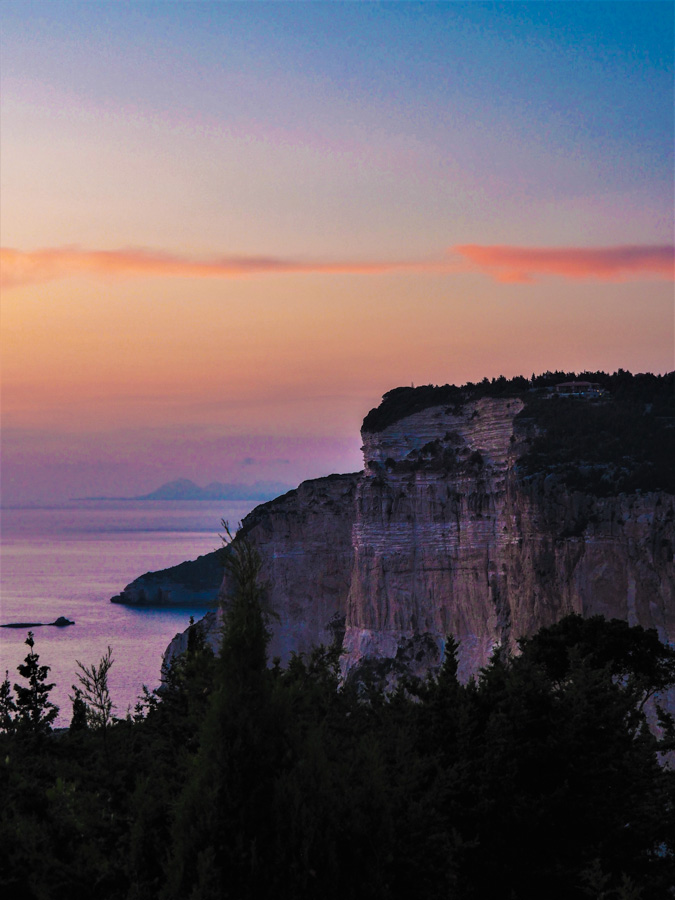 Have you ever visited the Ionian Islands? Or taken a private cruise on a luxury sailboat?