The 25th of March in Greece is both the most important national holiday as well as a religious holiday. Counting back nine months from Christmas day and the birth of Jesus brings us to March 25th. This is the day of the Annunciation – in Greek, the Ευαγγελισμός (Evangelismos) – when the angel Gabriel announced the Incarnation to the Virgin Mary. When we say the Evangelismos, we are referring to the religious holiday. But when we say the 25th of March, we are referring to the national holiday: Greek Independence Day.

After nearly four centuries of Ottoman occupation, the Greek War of Independence began.  A wave of revolutionary nationalism has spread through Europe – the French Revolution in particular. This inspired both Greeks and foreigners – the poet Lord Byron the most famous among them – who were stirred by the ideals of Ancient Greece and the struggle of the Greek people.  The brewing revolution caught their impassioned interest, and they also took up the cause.

Mani and the Greek War of Independence

Anyone who has been to Mani knows that the true treasure of Mani is not the monumental historic “pirgous” – the iconic  “tower” houses characteristic of Maniot villages – nor the uncompromising beauty of the landscape, nor even the exceptional quality of the local cuisine. The real treasure of Mani is the Maniots themselves. It was their bravery and their skill in battle that made this the logical place for the revolution to begin. 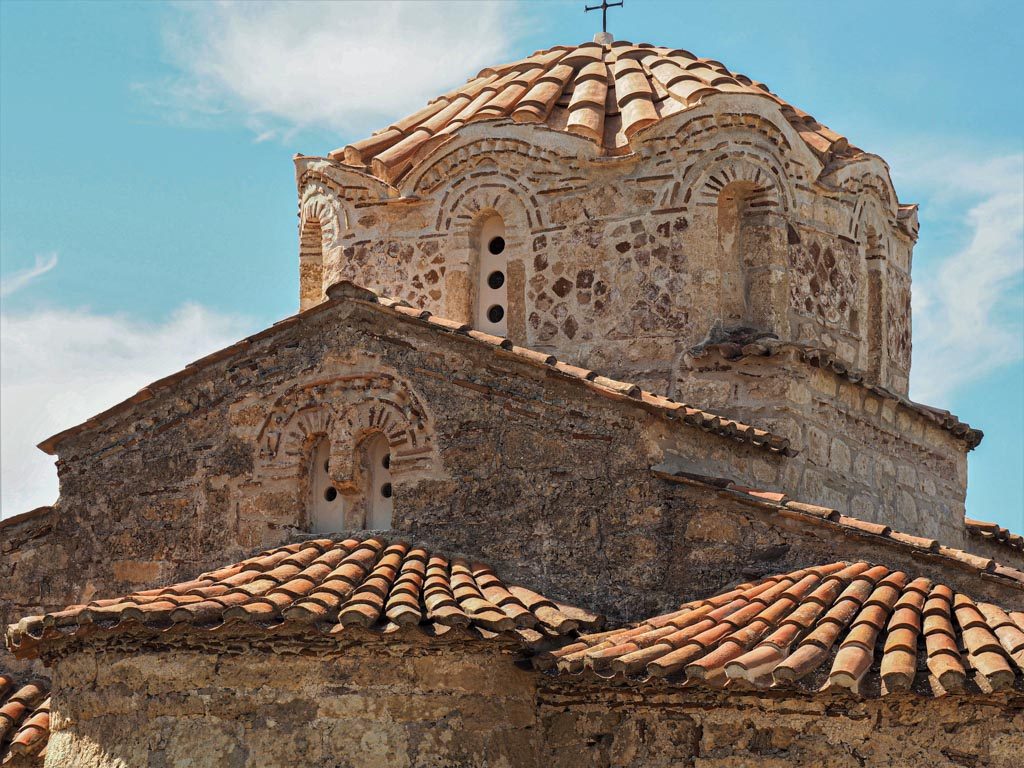 The Maniots claim to be the descendants of the Spartans, and it is a logical claim in both geography and in spirit. All over Mani, flags proclaim their fiercely independent spirit: “Nίκη ή Θάνατος” (“Victory or Death”) above the cross; “Tαν ή επι τας” (“With the shield or on the shield”) below it.

From the later part of the 18th century (1776), the people of Mani had a semi-autonomous status. Eight local “Beys” ruled on behalf of the Porte. These beys were Greeks. And it was one of these beys – Petros Mavromichalis – who ultimately declared war on the Ottomans from Areopoli on the 17th of March, 1821. There is a statue of this hero of Mani – and all Greece – in the central square of Areopoli. The square is called – The Square of the Immortal.” The people of Areopoli preceded the rest of Greece in their declaration by eight days. The name of the town is poetically fitting: it derives from Ares, the god of war. Three days later, an army of 2,000 Maniots, including the illustrious hero Theodoros Kolokotronis, marched to Messenia. They continued on to Kalamata, which had an Ottoman garrison, and they captured the city on March 23rd. 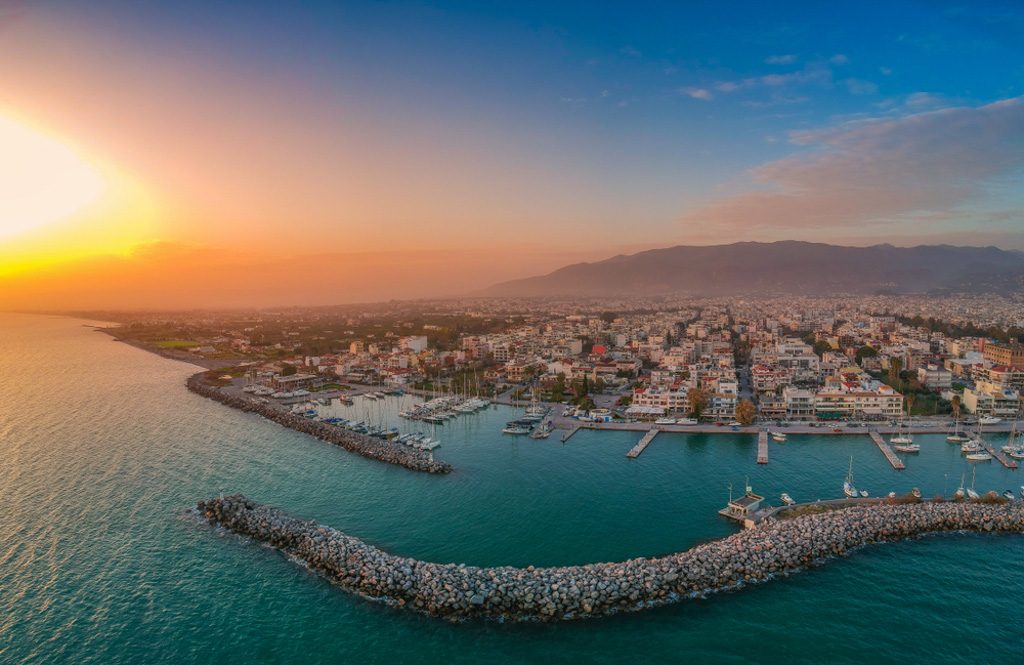 This is a fitting spot for a revolution to begin. It’s truly a wild and inspiring part of Greece, at the southwestern tip of the gloriously rugged Mani peninsula. The landscape itself had proved unconquerable, and was ideal for breeding warriors. That same landscape makes this one of the most heavenly destinations of Greece today. The combination of the dramatic mountainous terrain and the pristine waters of the hidden coves is definitely Greece at its beautiful best. Mani provides an incredible variety of landscape and a variety of experience as well. Visiting during the commemoration of the Greek War of Independence is an ideal time to experience the true spirit of Mani.

The 25th of March in Mani

The traditional celebrations at this special time of year are many, for it is both the Annunciation to be celebrated, and the freedom of Greece. The 25th of March is marked with great parades all over Greece. The largest parade is in Athens, with full military presence and it is a stirring thing to behold. In every community, there are school parades. The pupils are dressed in patriotic blue and white, and the top pupil in the class has the honor of carrying the flag. Other organizations take part, with many members dressed in traditional folk costumes. 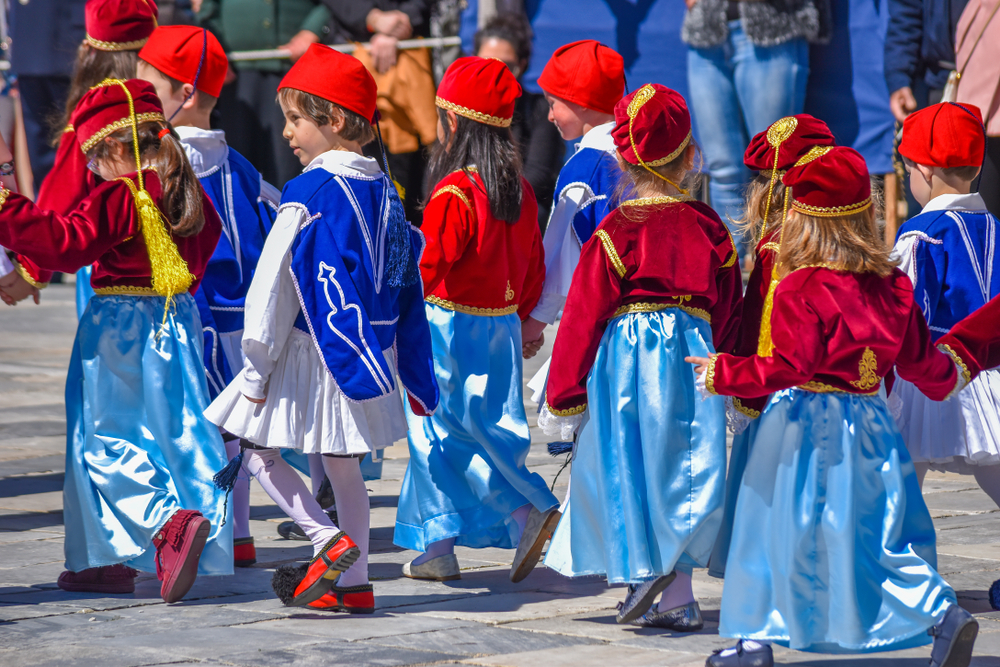 As this is also a religious celebration there is also a special dish. The 25th of March always falls during lent, the period of fasting that precedes Easter. In the Greek Orthodox church, fasting involves abstaining from all products from animals with blood in their veins- meat, dairy, eggs, and also fish. But the church permits two exceptions – on the day of the Annunciation and on Palm Sunday, fish can be eaten. On the 25th of March especially, the traditional fish is not fresh fish but salt cod. This is battered and fried crisp, and served with “skordalia” – a bold spread of garlic and potatoes or bread.

Of course, there is much more than salt cod to enjoy in Mani. This arid and rugged landscape produces some of Greece’s very finest olive oil, from the koroneiki olive. All the other produce is also intensified in flavor. Some specialties of Mani include superb cheeses, like sfela, a brined and semi-hard sheep’s or sheep’s and goat’s milk cheese. They also have siglino – a pork that is salted and then smoked. 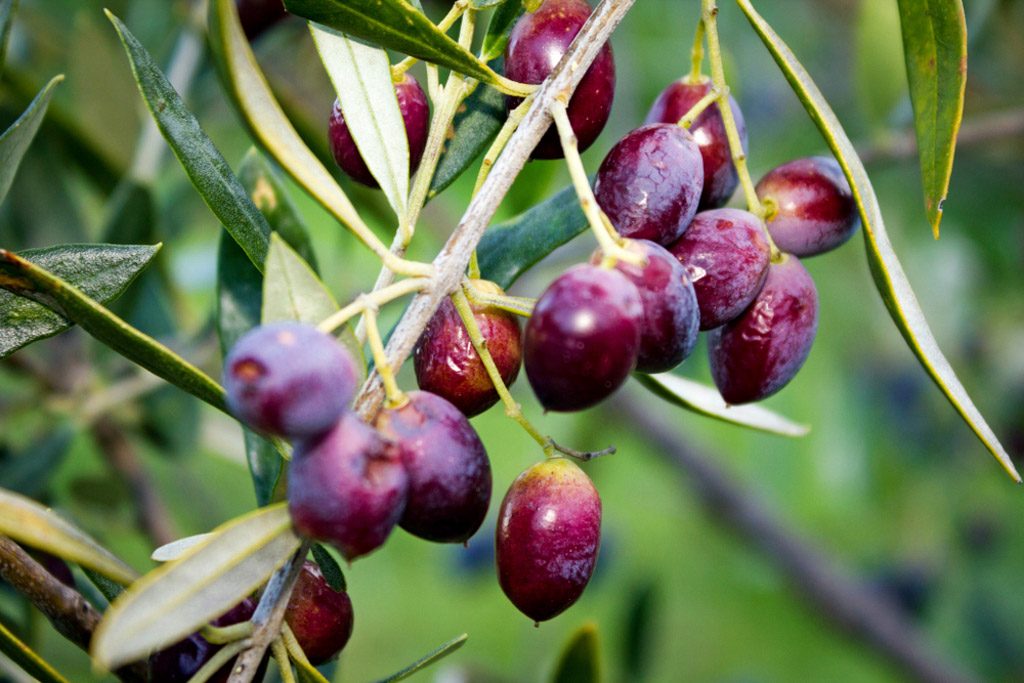 It tastes like the landscape, because it is smoked with sage, which permeates the meat with the scent of the herb. Two of the region’s best-known products are the Kalamata olives, and the oranges of Laconia – these two meet in salads where the sweet and salty play beautifully off of one another. The landscape also nourishes vineyards producing delicious local wines. 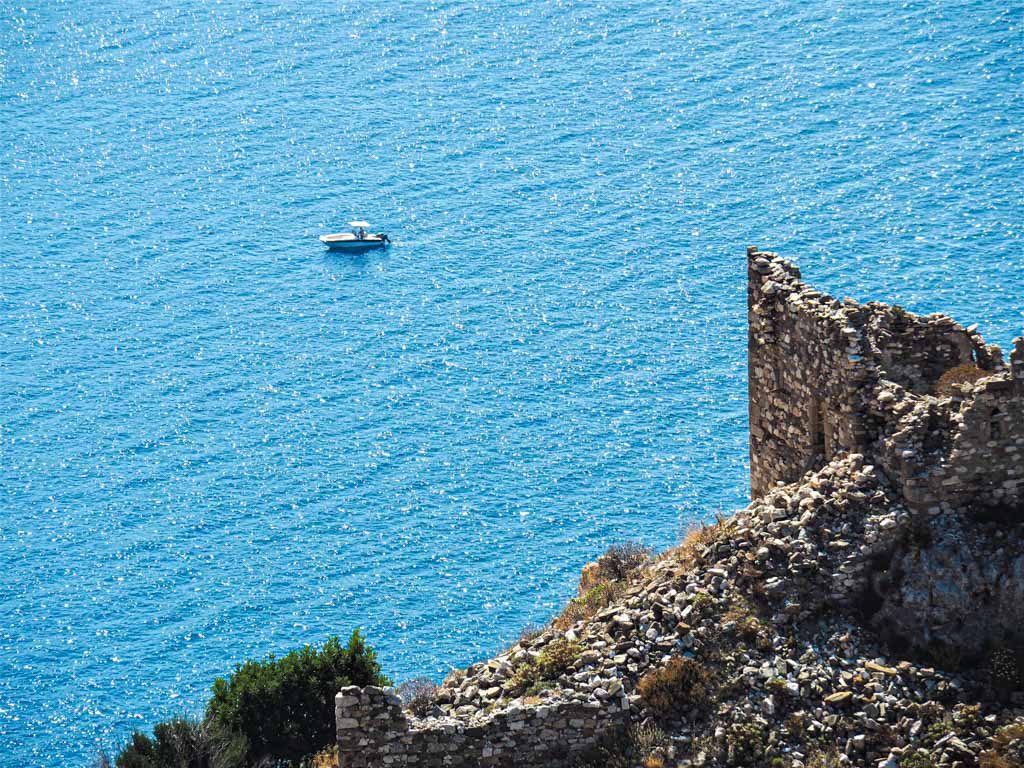 The same uncompromising and rocky landscape that bred the brave people of Mani makes this one of Greece’s most beautiful regions for the visitor. It is at its lushest in the springtime. Hills are covered with trees in bloom, including the ubiquitous olive trees. Mani’s slopes are full of the beautiful and bountiful silver-leafed trees. Mani’s fascinating villages, with their unique architecture, are connected by ancient paths, which today make breathtaking hiking trails through the scenic beauty of the landscape. The air is fragrant with the scent of wild flowers and herbs.

The coastal areas of Mani are stunning. The closest place to enjoy the sea by Areopoli is just a couple of kilometers away. It’s called Limeni. People speak of the beaches of Greece, the stretches of silken sand. Limeni has no beach – the beauty is much more pristine. 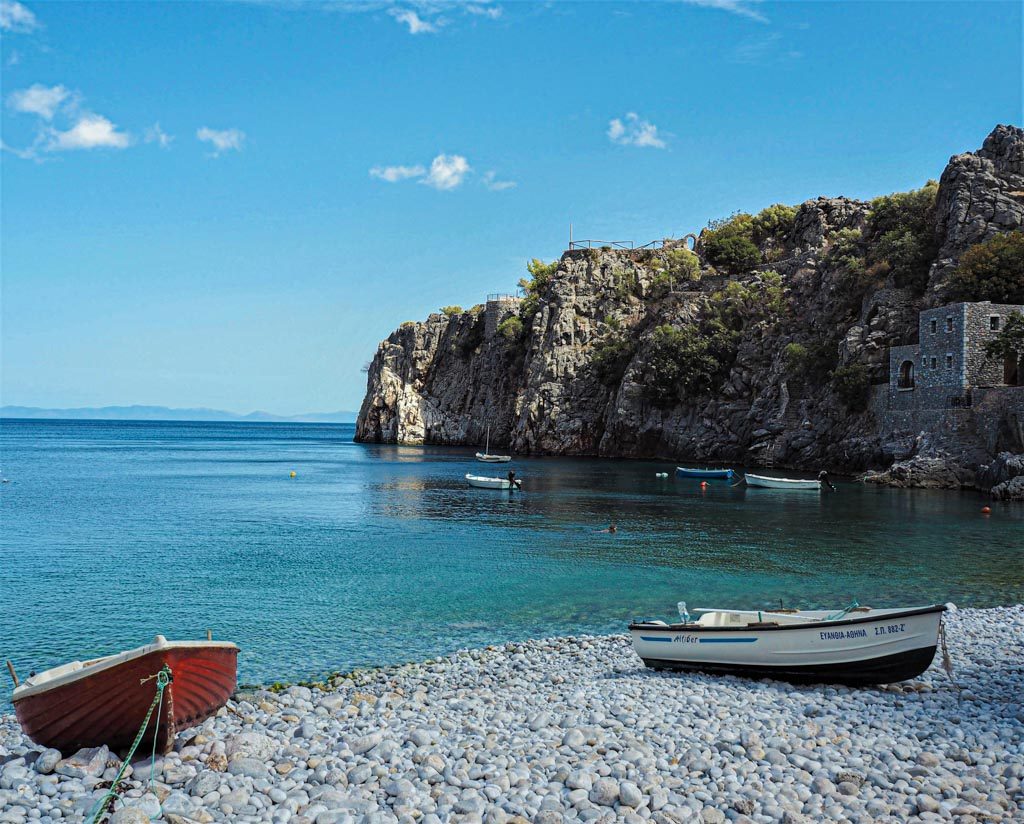 The gorgeous turquoise waters are bordered by sparkling white boulders in this deep and sheltered cove. Locals follow their swim with a lunch of lobster macaroni, and it’s nice to follow their example.

Holidays with Style in Mani 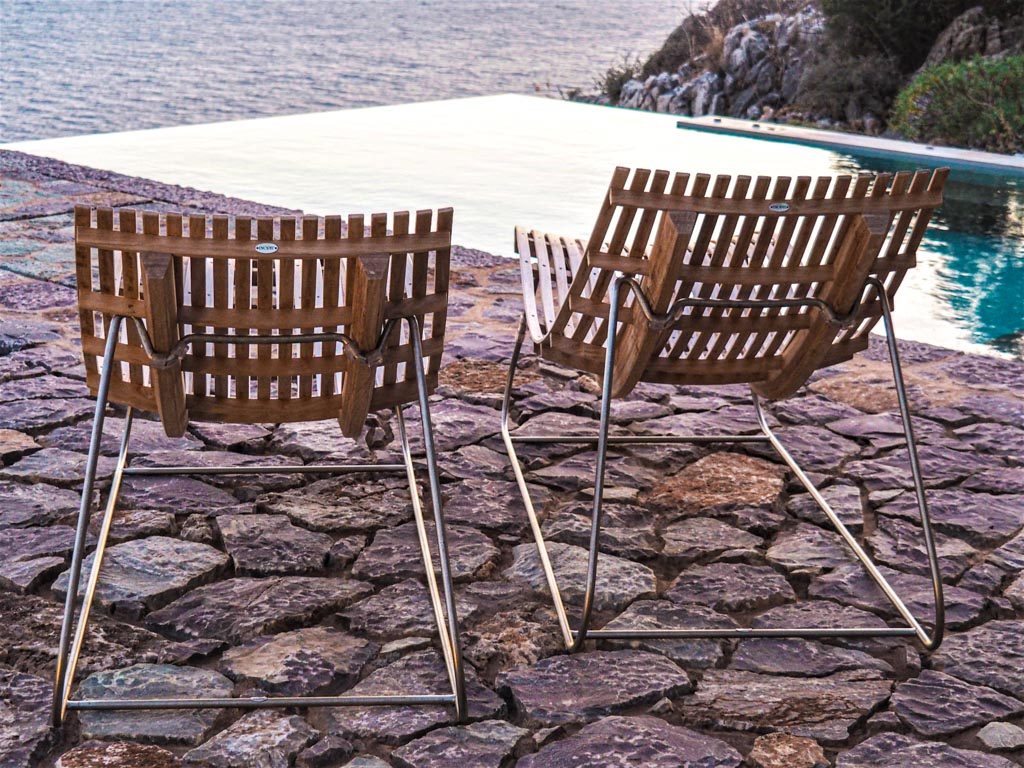 Just because the landscape is rugged does not mean that accommodations are rough. On the contrary, there are excellent boutique accommodations in Mani. These marry luxury with authentic architectural surroundings and details. Authenticity defines the Mani experience, from the excellence of the stylish boutique hotels, to the quality of the cuisine.

Have you ever been to the Mani Peninsula?