The Athens and Epidaurus Festival 2021: The Highlights

The Athens and Epidaurus Festival is the highlight of the Greek summer. This celebration of the Arts, which began in 1955, features performances of theatre, music, and dance.

The Athens and Epidaurus Festival – an Illustrious History

From its earliest years, this festival has had worldwide prestige. Illustrious artists have come to its stages over the decades. Leonard Bernstein conducted the New York Philharmonic at the Herodes Atticus Theater in 1959. In 1961, Maria Callas performed both Medea and Bellini’s Norma. That same year, ballet legend Margot Fonteyn performed with the Royal Ballet. Another ballet icon, Rudolph Nureyev, danced here in 1963. And the festival has celebrated the revolutionary in the arts, with the Alvin Ailey American Dance Theater performing in 1972, and Martha Graham in 1983. These are just a few of the definitive performances over the decades of the festival.

Venues for the Athens and Epidaurus Festival

Part of the interest of the Athens and Epidaurus festival, apart from the extraordinary performances, is the quality and variety of the performance venues. To see an Ancient Greek tragedy at the Ancient Theatre of Epidaurus at the Asklepion connects you with the power of ancient drama and the soul of the ancient world like nothing else – truly a life experience. A smaller theater by the site also will host performances – the “Little Theater.” The Odeon of Herodes Atticus, beneath the majestic glow of the Acropolis, is another venue enriched by the magic of centuries.

Apart from these classic locations, the festival also embraces the mood of urban, contemporary Athens at Peiraios 360, a complex that was once a furniture factory and has since been converted by the National Bank of Greece. There are also more intimate venues, such as the Cultural Foundation of the National Bank of Greece, in its splendidly restored historic home in the heart of Athens, or even the Steki tou Ilia, a casual grill restaurant by the Kerameikos.

The Athens and Epidaurus Festival Program – a Celebration of the Ancient and Contemporary, the Greek and the International

One of the most interesting things about the Athens Epidaurus Festival is how it unites the local with the international, and the classic – including timeless plays from Ancient Greece – with the contemporary. The 2021 program brings together artists from all over the world, exploring universal themes. One of the particular highlights of the festival are the contemporary renditions of ancient tales. Another theme explored is the cross-cultural influences we feel in music. The world truly comes together at the Athens and Epidaurus Festival.

Music at the 2021 Athens and Epidaurus Festival

As with dance, the music program embraces a spectrum of diverse performances, both Greek and international. 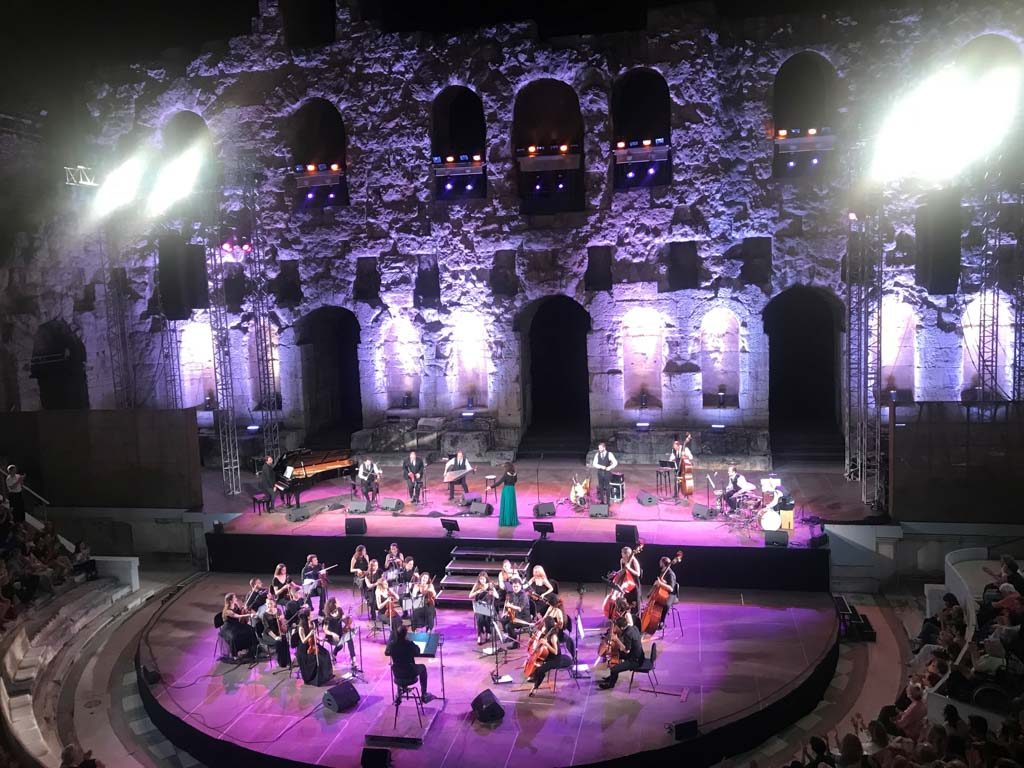 In “Tora Collective,” the composer Petros Klampanis embodies this very spirit, in a work that bridges together music from the Ionian Islands, Crete, Epirus, and the Aegean, and performers from all over the globe, in a dialogue between east and west, the present and the past. “Sotiria’s Songs,” celebrate the life of the legendary “Mistress of Rebetiko” singer Sotiria Bellou through song and stories, performed by Christina Maxouri in an intimate courtyard in Thissio (To Steki tou Ilia), perfectly suited to the spirit of the event. The magnificent Greek singer Eleftheria Arvanitaki will present “Two Milestones” – these milestones being two of her albums which feature works by Greek poets both ancient and modern, such as Sappho, Maria Polydouri, Kostas Karyotakis, Odysseas Elytis, Michalis Ganas, Karyotakis, K. H. Myris, and Dionysis Kapsalis, with folk couplets. Accompanying her will be the Friends of Music Orchestra, conducted by George Petrou.

Among the international offerings this year, the Odeon of Herodes Atticus will host a singular event – a performance of the world-renowned artists Brian Eno and Roger Eno – the first time the brothers will have performed together live. The Norwegian jazz saxophonist Jan Garbarek will be joined by the Indian percussionist Trilok Gurtu, a member of the Jan Garbarek Group. Legendary conductor Zubin Mehta will lead the Orchestra del Maggio Musicale Fiorentino, featuring the great Israeli violinist Pinchas Zuckerman, in a performance featuring Brahms. The innovative Anouar Brahem Quartet, featuring composer Anouar Braham on the oud, brings together traditional and classical Arab music with jazz.

Theater Highlights at the 2021 Athens and Epidaurus Festival

Theater performances at this year’s Athens and Epidaurus Festival once again span the classical with the contemporary, for some electric performances. The director Simos Kakalas reimagines Sophocles’ antihero “Ajax” at a contemporary snackbar, playing backgammon, and the director Yannis Kakleas – known for his Aristophanes comedies – tackles Euripides’ “Orestes,” at Epidaurus. Meanwhile, the tragedy of “Oedipus” unfolds in contemporary Greece, the protagonists a family of vacationing German industrialists, based in the script of dramatist Maja Zade, under the direction of the visionary Thomas Ostermeier. “Phaedra on Fire”, by the Sforaris Theatre Company, under the direction of Yannis Kalavrianos, brings to the stage a modern Phaedra – imagined by the writer Amanda Michalopoulou. This Phaedra embraces her passions – coming face-to-face with fire – rather than succumbing to guilt. 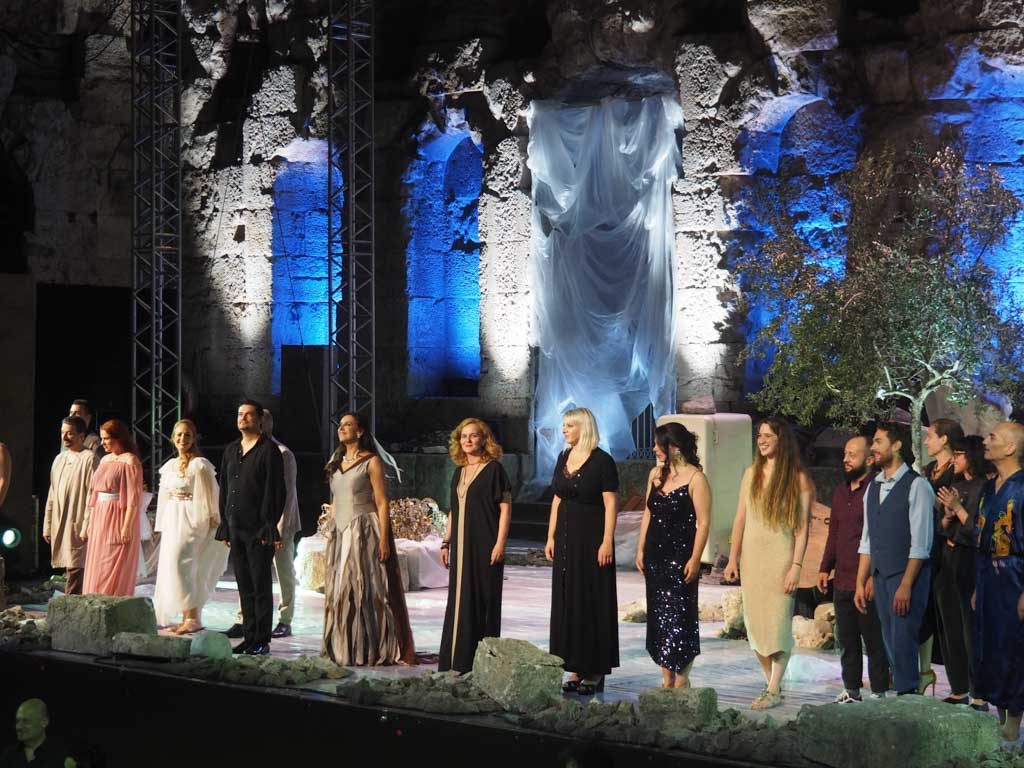 The contemporary offerings include a dynamic hybrid of expressionistic theater and cinematic realism in “Violence.” In the hands of the Canadian Marie Brassard and her company Infrarouge, our gradual exposure to violence as we grow up is explored. On the occasion of the bicentennial of Modern Greece, the star of “The National Fashion Show,” by Pantelis Flatsousis, is the fustanella – pride of the Evzones, of Lord Byron and the Souliotes, of King Otto. It is joined on the catwalk by other iconic looks from Greek history, including Queen Amalia’s traditional attire, the Frankish clothes of Ioannis Kapodistrias, and the tailcoat of Adamantios Korai – in an exploration of identity that asks the question about how we can forge inclusive communities in our future.

The Athens Epidaurus Festival is a wonderful occasion to visit Greece. Celebrating the arts in the birthplace of ancient drama, in historic and dynamic settings, a cultural experience without parallel.

Have you ever been to the Athens and Epidaurus Festival?