The Windmills of the Aegean Islands 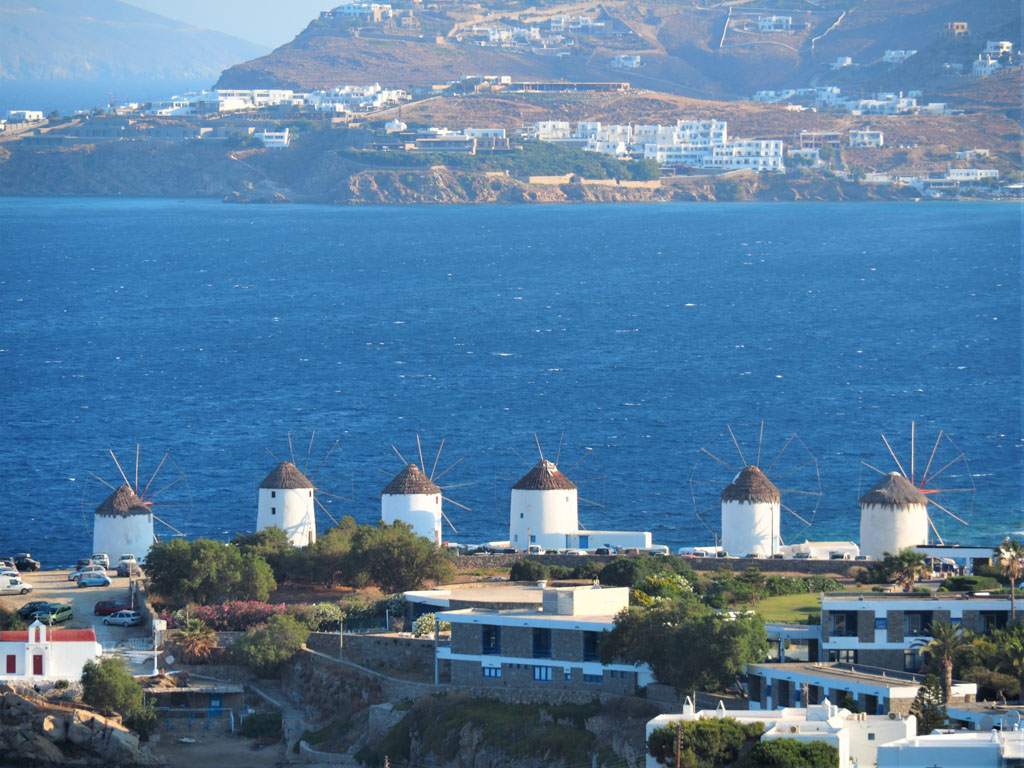 The Greek Islands are famous for many reasons, but two characteristics stand out in particular- the purity of the beautiful vernacular architecture in pristine white against the clear blue Aegean skies, and the brisk and cleansing winds that sweep over the islands. Our story today is a little about both. 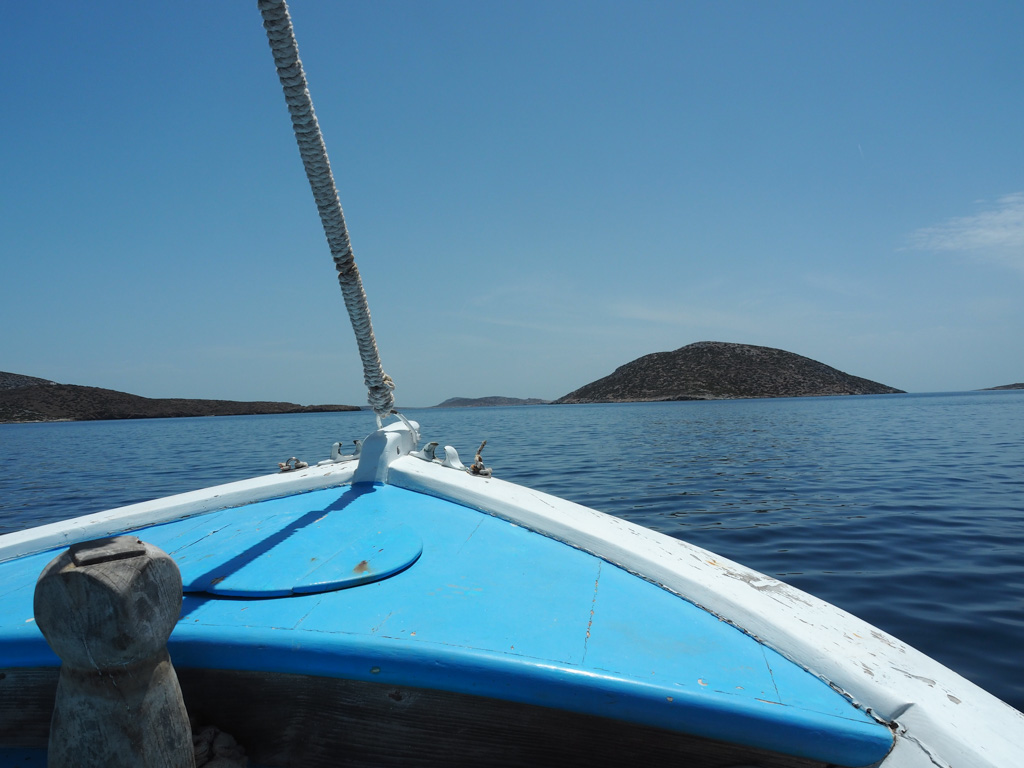 The winds of Greece have names, and one of the most commonly known is the Meltemi – a cleansing wind, low in humidity, making for clear skies. It begins in the Bosporus and makes its way south across the Aegean, touching the Sporades and the North Aegean islands in its path. The full force of it though is best felt in the Cyclades and some of the Dodecanese.

The Windmills of the Aegean Islands

For centuries, the inhabitants of the Cyclades and the Dodecanese have been harnessing the power of the wind. And the charming traditional windmills have now become at least as famous as the winds themselves – one of the principal landmarks of some of the islands. These are beautiful examples of Cycladic architecture – a simple geometric shape, in this case a cylinder – in white against the deep sky blue.

Here’s where to enjoy seeing them:

The windmills of Mykonos are one of the most well-known images of Greece, perched on the hillside across from “Little Venice.” And speaking of the Venetians, it was they who first built the windmills during their tenure, which began in the beginning of the 13th century. The windmills themselves were first constructed in the 16th century, and through the centuries which followed. 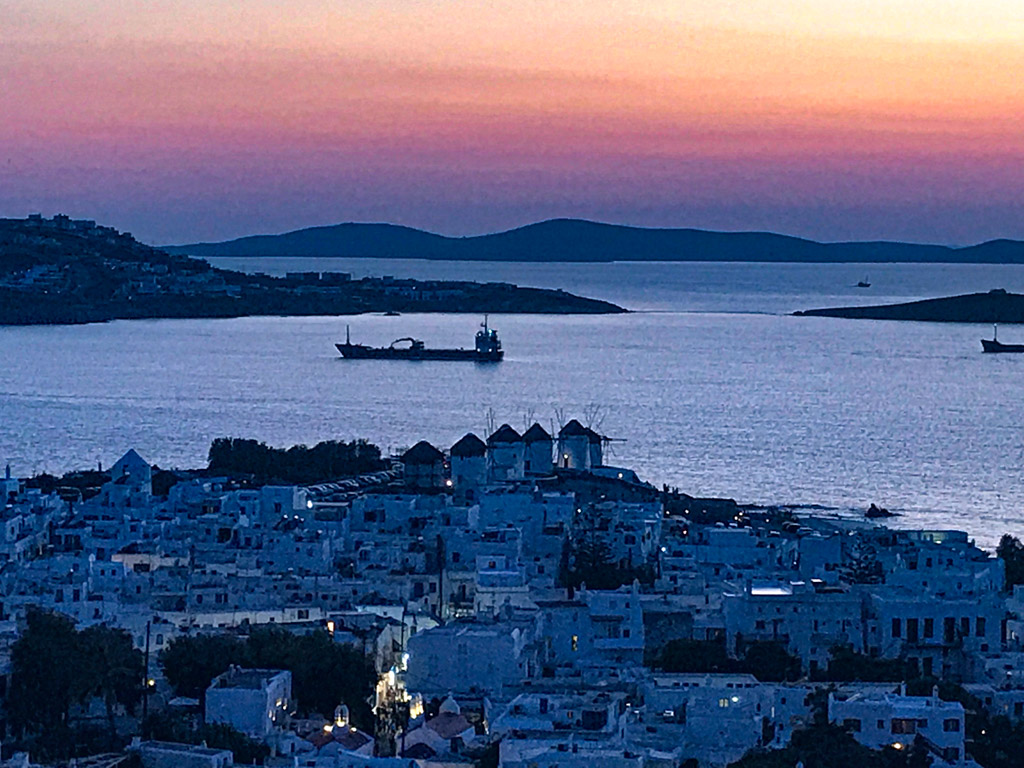 The mighty tall cylinders with their thatched roofs and the twelve antennae once fitted with sails to harness the wind and turn the grindstones inside for milling wheat. This in turn was used to make rusks – Mykonos was famous for them. So many ships passed through and the “paximadi” – double baked dry rusks – were the perfect provision. 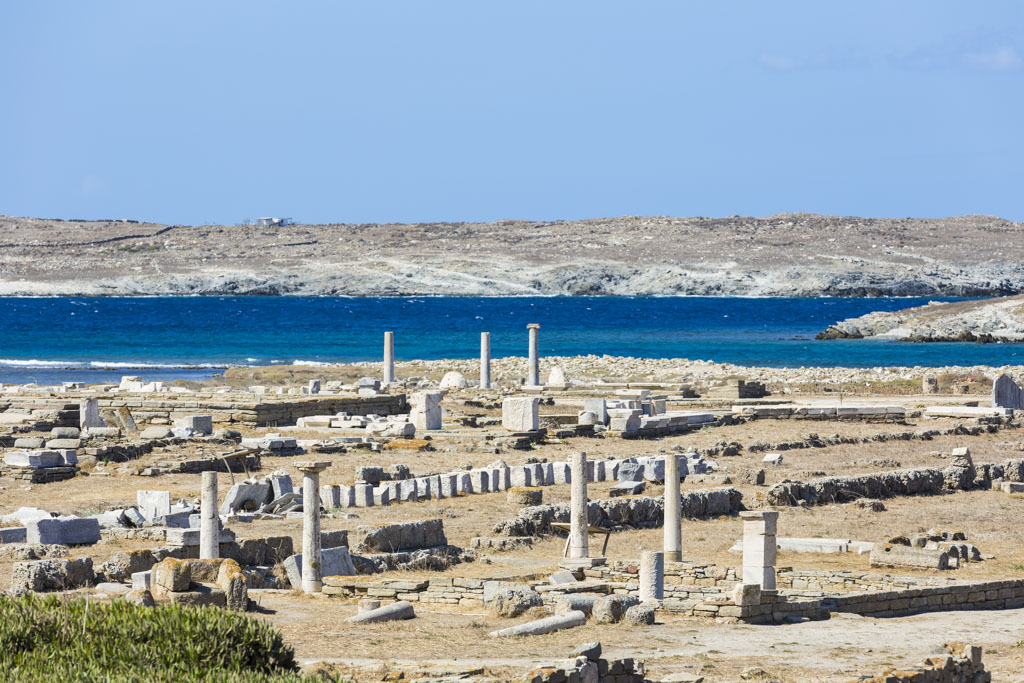 This most cosmopolitan of all the Greek islands is an exciting destination. For culture, one can do no better than the adjacent uninhabited island of Delos – a sacred sanctuary of ancient Greece and one of the archeological treasures of the world. Besides the famous beaches, there is also the superb, exclusive shopping, and the brilliant nightlife. And one of the best ways to begin a Mykonos night is with a sunset drink at one of the enchanting bars of Little Venice, admiring those trademark windmills.

Ios has a dozen windmills, set in two rows, overlooking the Chora. While just three have been restored, their silhouettes make a lovely sight. They were used for milling wheat and barley.

Lovely Ios is right in the middle of the Cyclades, between Santorini to the south and Naxos to the north. The island captures the wonderfully elemental Cycladic landscape, and boasts excellent beaches. Ios is famous for its fun nightlife, but also offers plenty to do and see by day. The famous winds that once turned the windmills are also great for windsurfing – there are many places on the island for lessons and equipment rental. 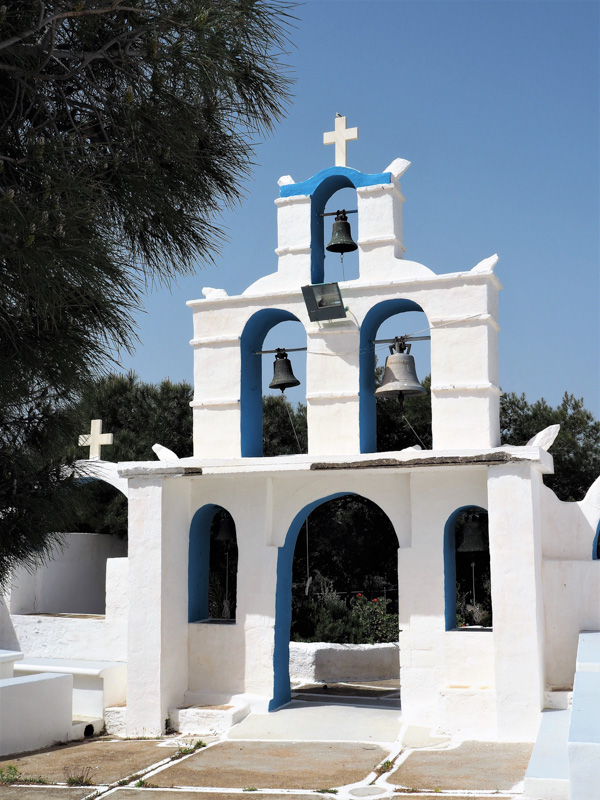 Culture, too, is not lacking. There is the ancient Bronze Age site Skarkos, an Archeological Museum featuring finds from the island – including Cycladic figurines, the supposed tomb of Homer, a Venetian castle, and several wonderful churches. 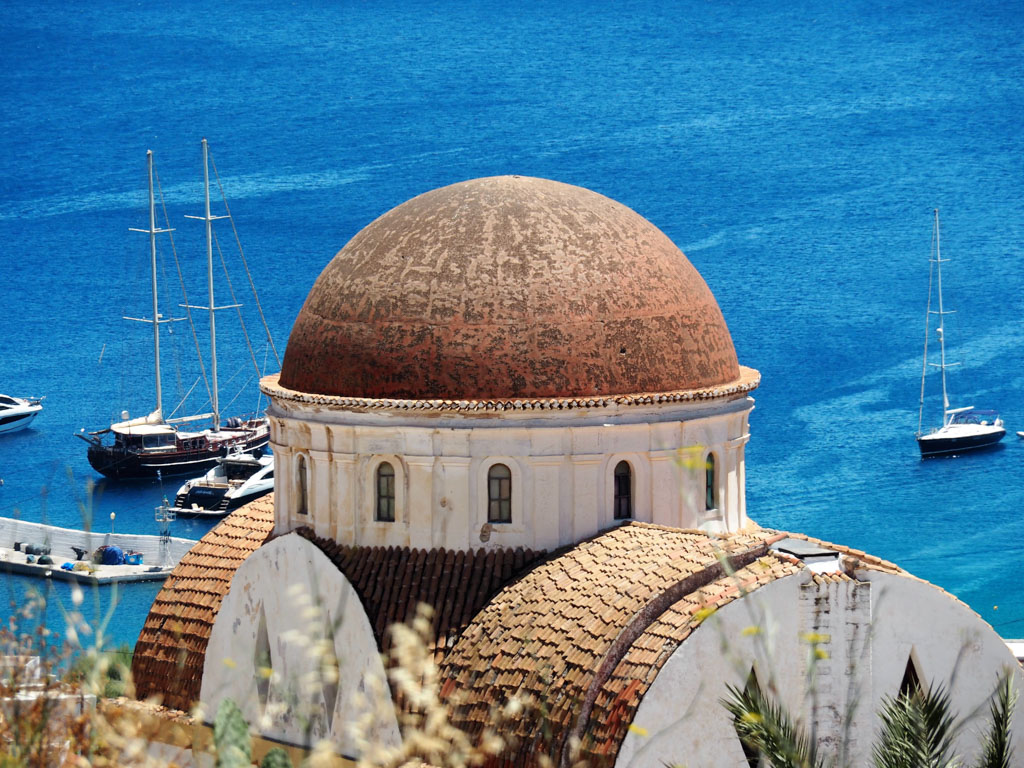 Remote and charming Astypalaia has no close neighbors. Technically the island belongs to the Dodecanese, not the Cyclades – it’s the westernmost of the Dodecanese chain. But it, too, is graced by the Meltemi. 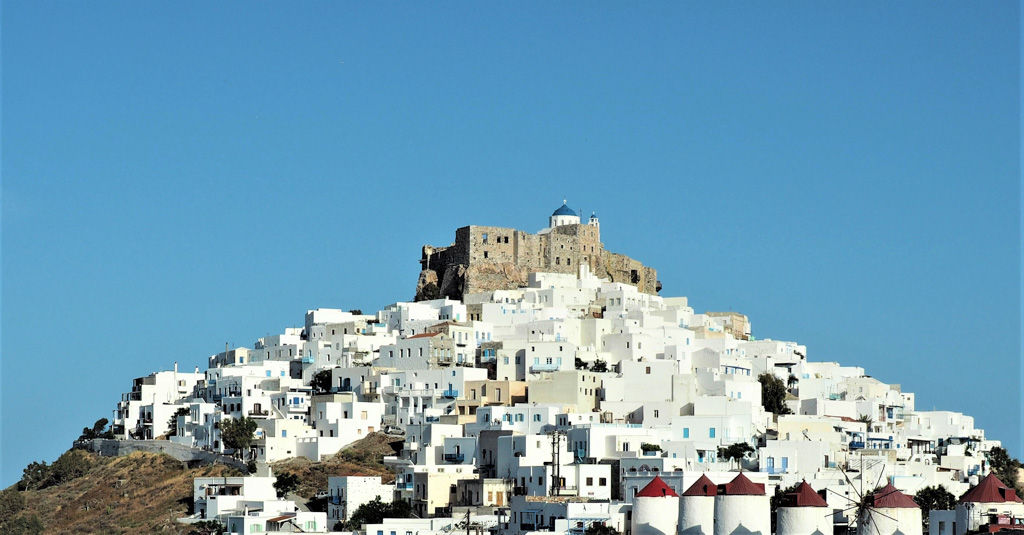 Astypalaia has eight windmills, located above Skala. All have been renovated. They are of an unusual type, called ‘xetrocharis’ – it is not just the sails that move, but the entire roof. Like those of the other islands, the windmills of Astypalaia were used for milling grain.

Astypalaia is a wonderful choice for people seeking remoteness, not just geographically, but in its way of life. The large-scale tourism that has reached many of the Cyclades and the Dodecanese has left this gem untouched. Here, one can enjoy a sense of serenity, surrounded by natural beauty – including waterfalls and caves, as well as gorgeous beaches. Astypalaia offers excellent fish and seafood, and elegant accommodations with authentic charm.

Leros – For an Italian Touch

The Dodecanese island of Leros is, like Astypalaia, one of Greece’s marvelous decidedly under-the-radar destinations for people seeking an authentic Greek experience in a tranquil setting. 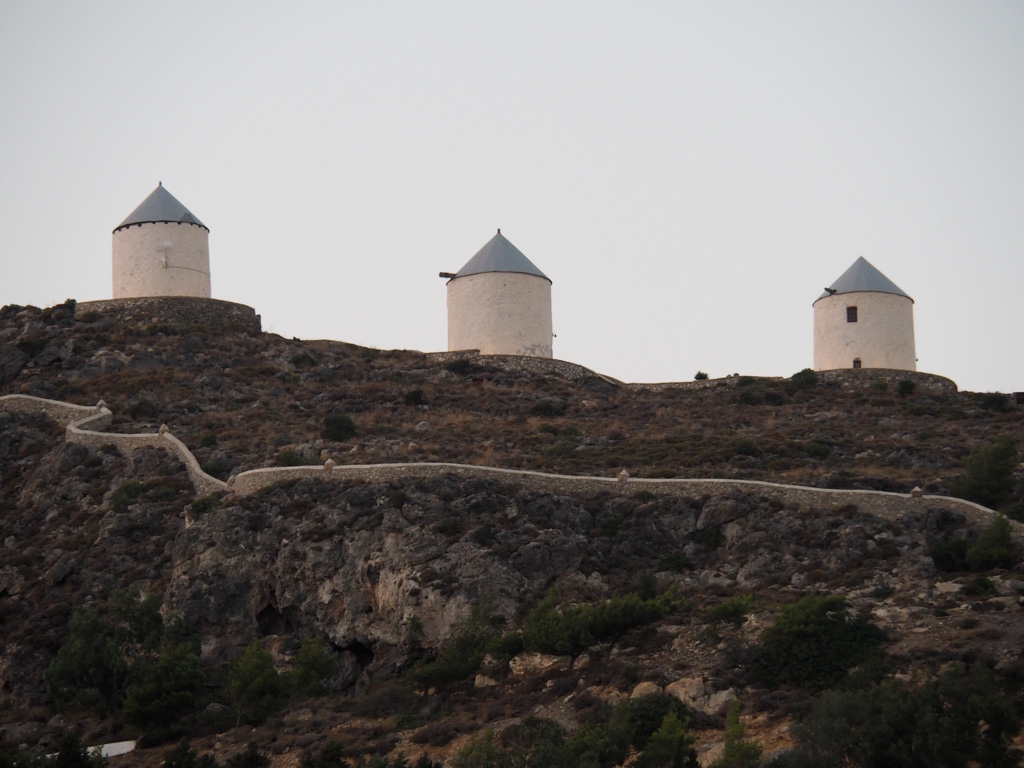 There are lovely beaches protected from the ends that sweep the island, as Leros is known for its coves and inlets. And it is also known for being quite lush, with fragrant forests of pine. There are charming examples of Neoclassical architecture, giving Leros an elegant touch.

And Leros is also known for unusual architecture. The Italians ruled this part of the Aegean from 1912 to 1943, and they were particularly drawn to Lakki, as it has the deepest natural harbor in the Mediterranean. Here, they established their main Naval base in the Dodecanese. In the town of Lakki – Porto Lago – one can see some fine examples of Italian Rationalist architecture. In Lakki, there is also a very famous war Museum, built in an actual tunnel constructed in WWII. Like many islands, Leros also features a medieval castle. But among the most photographed spots on Leros are the charming windmills of Agia Marina. 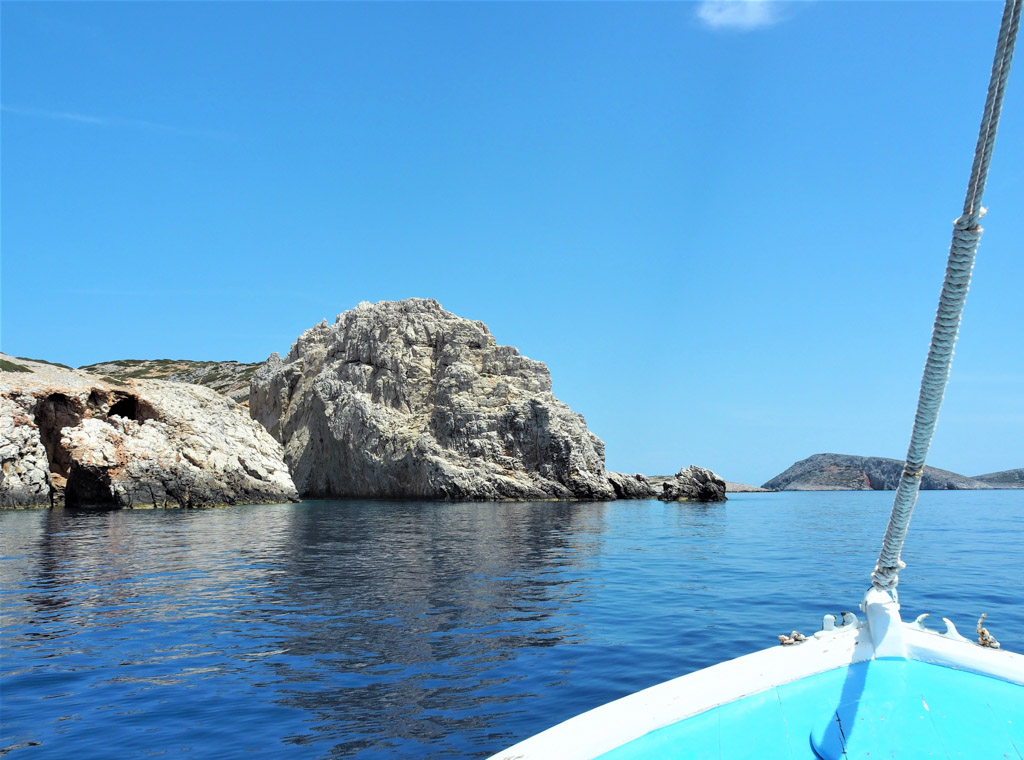 Have you visited any Greek Islands famous for their windmills?

Tags: bespoke travel, fly me to the moon travel, Greece, luxury travel experts, travel designer
Previous Article
Next Article
This website uses cookies to improve your experience. We'll assume you're ok with this, but you can opt-out if you wish. Accept Read More
Privacy & Cookies Policy