A Hiking Holiday Along the Nestos-Rodopi Trail

In the richly verdant countryside of Northern Greece, there is a fantastic hiking trail that brings you in touch with the heritage of the region. The scenery takes you through the Rhodope mountains and along the straits of Nestos, some of the most inspiring scenery in Northern Greece. Moreover, hikers will be following historic paths, both train tracks and ancient routes that once connected villages throughout the area for travelers on foot, and donkeys conveying goods. The Nestos Rhodope trail brings you into contact with both nature and culture.

A Hiking Holiday Along the Nestos-Rodopi Trail

This trail of nearly 70 kilometers is broken into six lengths of varying degrees of difficulty, so your ideal hike can be tailored to your wishes.

Villages along the Nestos-Rodopi Trail

Galani, on the Nestos River, is the starting point for the first leg of the trail, running along train tracks. The community of Galani consists of several small and charming villages, including Toxotes, which has traditional tavernas and cafes for refreshment. Then there is the lush riverside village of Kromniko and its train station, now abandoned to trees – this was a village for Pontian settlers from the Asia Minor catastrophe, but they moved in search of greater resources after WWII.

Toxoti, along the trail, has one of the most picturesque old railway stations of all Greece, and is an enchanting village to stop in and enjoy a traditional meal. The charming village of Stavroupoli is on the banks of the Nestos River. With its cobblestone streets, traditional houses, and classic central square, it’s another pleasant place to rest and find refreshment. There is also a small Folklore Museum to visit here. 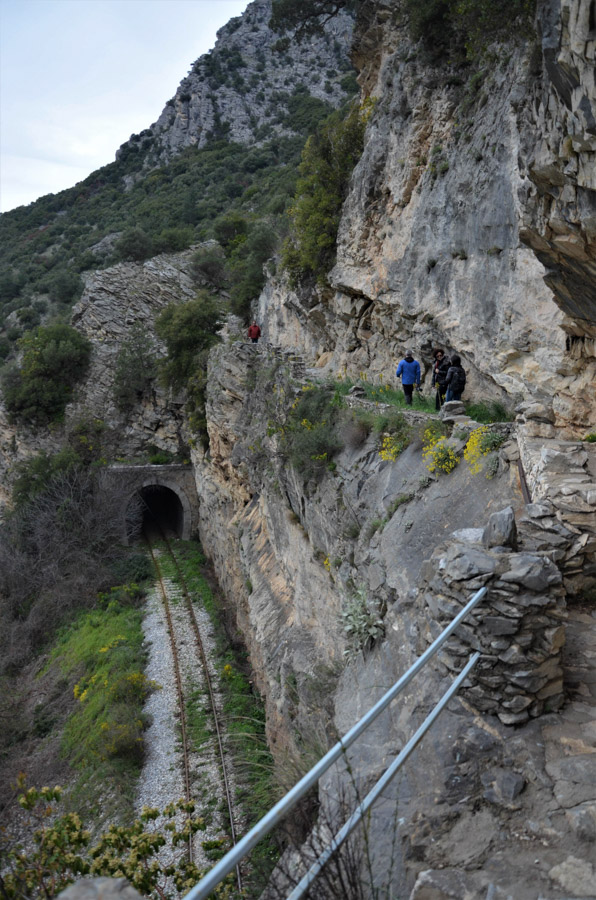 Karyofyto is the destination of one of the legs of the trail. Kato (“lower”) Karyofyto has no restaurants or cafe, but Ano (“upper”) Karyofyto has lovely options for refreshment and meals. It is just over a kilometer away. Leivaditis is another small village en route where you can find a traditional meal.

The Nestos-Rodopi hiking route runs near cultural monuments of many eras in the history of Greece. The hiking route itself consists of cultural monuments – alongside railway tracks and historic train depots, such as the Stavroupolis station and the Toxotes station- considered to be one of the loveliest historic train stations in Greece. The Komnina railway station has an interesting anecdote attached – the famed Orient Express used these racks, and once waited at Komnina for several hours for a tobacco delivery. Much of the remaining trail consists of “Kalderimi” – donkey paths of stone which were built between villages and fields. 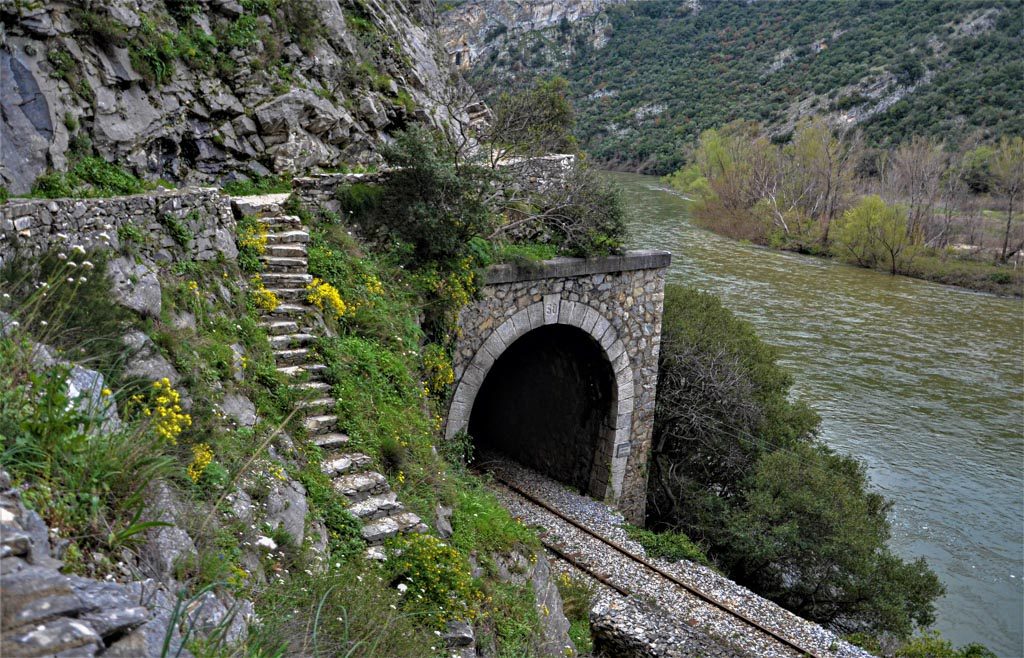 Between Kromniko and Stavroupoli, you’ll come to a monastery of Saints Konstantinos and Eleni. Although built in 1947, it’s history is much older- women from the village saw the earlier church of Justinian times that once stood here in their dreams. A fortress of the same era stands atop a nearby hill.

Near Stavroupoli is the Macedonian Tomb of Stavroupoli-Komnino, the best preserved such tomb in all of Thrace. It is thought to be from the 2nd century BC, and connected to the settlement of Mytikas. 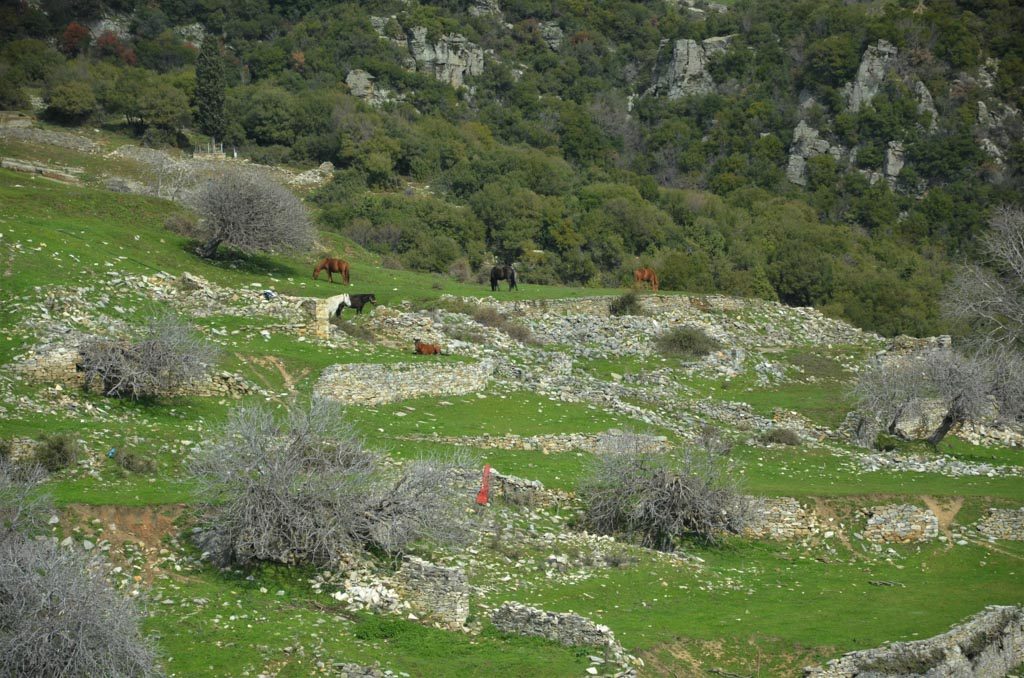 One also passes deserted settlements, such as Kalo Nero (“good water”), and across old stone bridges, such as the fine single-arched bridge of Agios Ioannis.

On the leg of the route between Kato Karyofyto and Leivadiadis is the countryside of myth. Imagine as you trek through this wooded region that the Nestor valley and the Rodopi mountain range is the mythical land of Orpheus and Eurydice. This is the place he played lyra, and inspired the ancient Orphic and Lithika texts.

The trail ends in the Erymanthos Forest Village.

Natural Sights along the Nestos-Rodopi Trail

This is a splendid area of Greece, with much variety in the scenery. The Nestos river and the area along it makes for wondrous scenery. This majestic river – the fifth largest in Greece – originated in Bulgaria, and flows for 130 km in Greece until it reaches the Aegean. The straits of Nestos, where the river cuts a winding path through mountainous territory, make  paradise not just for hikers but for birds. Ornithologists will love spotting some of the 250 species of birds that make a home here. 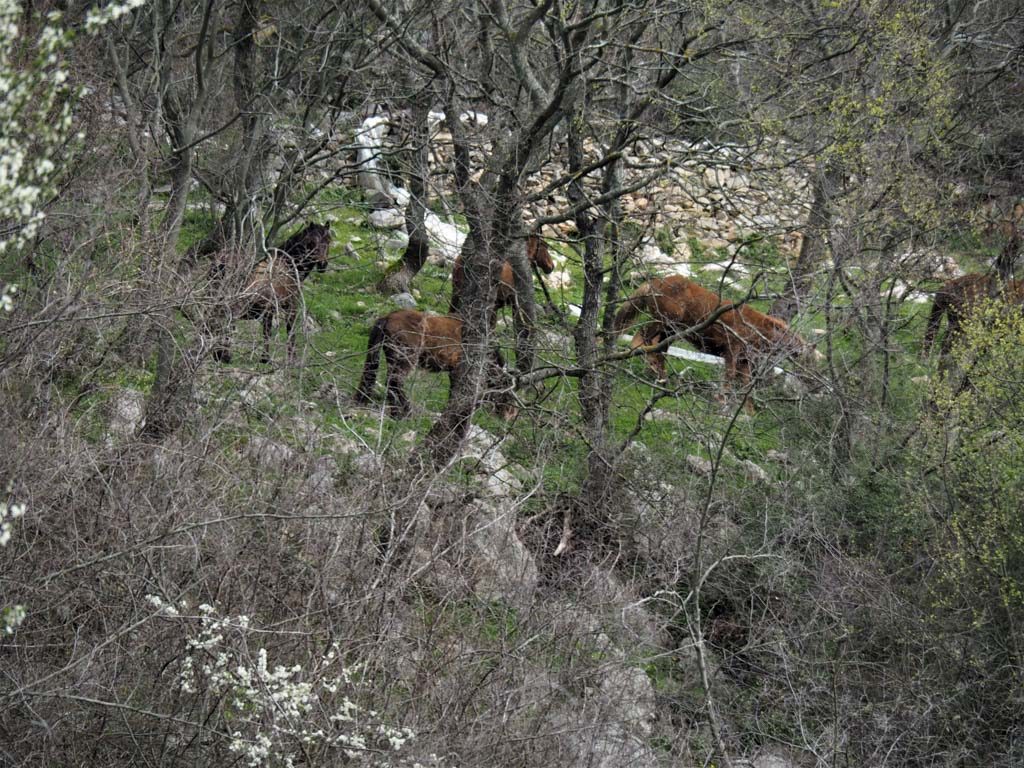 There is a great variety of trees along the path – poplars and willows, alders and plane trees populate the lush river banks. In the areas of the Rodopi mountains, oak trees give way to black pines as the trail gently rises.

Xanthis bridge and hill reward hikers with astonishing views. Towards the trail’s end one comes to the tremendous Leivaditis Waterfall, at 40 meters, is the highest waterfall of the Balkans.

The Xanthi region is culturally and gastronomically rich. Many Greeks from Asia Minor settled here in the 1920’s, and brought their hearty and exotic dishes with them. Besides superb sausages, you can sample “Pastourma” – a cured and boldly seasoned meat that is often made of beef but traditionally is made from camel. Another charcuterie product – “Kavourmas” – a seasoned pork preserved in its fat, like a zesty confit. These will be tasty alongside the notable regional wines. There are famous wine routes throughout the area. PGI Abdera, originating near Xanthi, and PGI Ismaros, of the Rodopi region, are just two of the excellent local wines among the many.

Delicious hand rolled pastas such as “Hilopites” and “Youfkades” are served with richly sauced meat dishes, and the area’s meats – lamb in particular – are superb. This is the best post-hiking cuisine – hearty yet refined. The Xanthi region also has some of Greece’s best sweets, specializing in syrup pastries, creams, and confections of Asia Minor.

Certification of the Nestos-Rodopi Hiking Trail 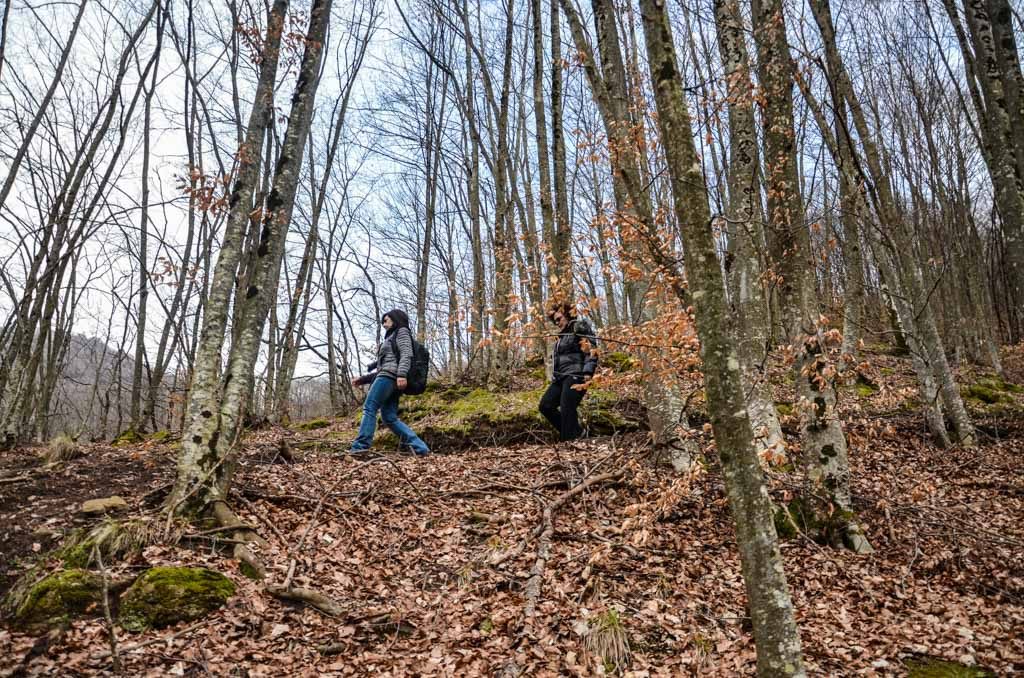 The European Ramblers’ Association has designated the Nestos-Rodopi Trail as a Leading Quality Trail. Such a designation indicates not only natural beauty, but cultural interest, excellent signage, maintenance, and manageable sections with places to relax and recharge along the way. The Nestos-Rodopi trail has been developed in conjunction with Paths of Culture of Thrace, and the Municipality of Xanthi, in order to showcase both their natural and cultural heritage.

Staying along the Nestos-Rodopi Trail

This enchanting traditional region abounds in historic villages and fine examples of vernacular architecture. After a pleasant day of exertion in the outdoors, you can relax in comfort at boutique hotels that showcase local character in style.

In addition to enjoying fine accommodations, your hiking holiday can be fully arranged so that you have nothing to do but enjoy the trail and the experience. Hiking need not mean “backpacking”-  luggage transfer from accommodation to accommodation, as well as ground transportationwhere you like, can also be arranged.

Visiting the Nestos-Rodopi Trail in Spring or Fall

This is a fantastic region in all seasons. But the moderate temperatures of fall and spring are truly ideal for hiking, with bracingly fresh mornings and warm afternoons. Fall’s golden foliage is truly spectacular, while the site of Greece in the full bloom of spring is one of the most inspiring scenes that nature offers. 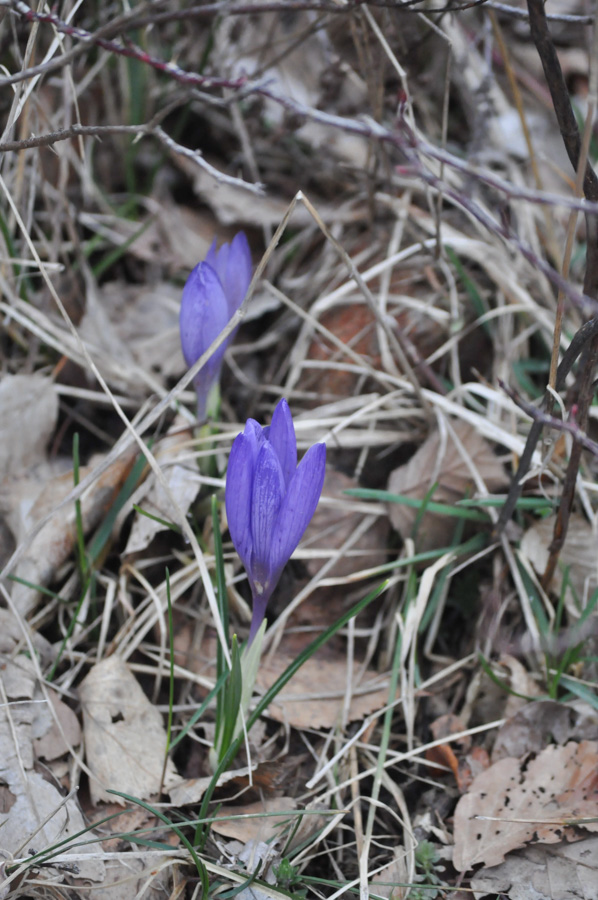 Have you ever visited Northern Greece, or enjoyed a hiking holiday here?