A Hiking Holiday along the Menalon Trail

A hiking holiday in Greece can be stimulating and restorative. Sometime communing with nature – alone, as a couple, or with friends or family – is the ideal combination of activity and solitude. It’s also a wonderful way to experience Greece.

Greece’s glorious landscape is particularly rewarding to hikers. There are great stretches of completely unspoiled nature that will only reveal themselves to a very few. On a hiking holiday you can enjoy a privileged experience of Greece that few visitors ever see – a private Greece.

A Hiking Holiday along the Menalon Trail

The Menalon Trail is just such an extraordinary destination. This splendid trail is in the heart of Arcadia, the region of the Peloponnese so famously lush and idyllic that its name has become synonymous with pastoral settings and harmony with nature. Hiking through Arcadia is an ideal way to experience it. 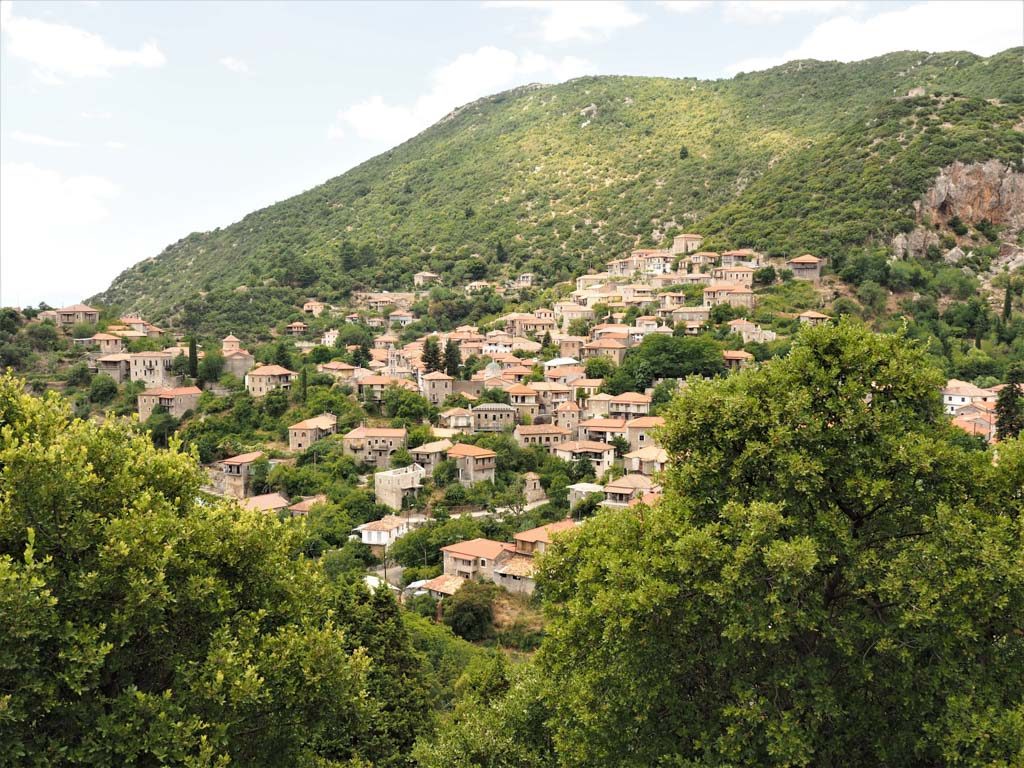 Hiking the Menalon trail can be an epic experience for those who commit to the full 75 kilometers. But this trail can also be extremely manageable – the Menalon trail is divided into 8 sections. For example, the shortest of these, connecting the villages of Dimitsana and Zygovisti, is just over 4 km in length. These are two of the seven traditional and historic villages that are linked by the trail, and they are each worthy of a visit.

The Villages of Arcadia along the Menalon Trail

Seven historic villages with beautiful vernacular architecture are connected on the Menalon trail, each with its own character. The trail begins at an elevation of 1083 meters in the mountainous village of Stemnitsa, one of the best known of the villages of the region. Stemnitsa, by the Loussios Gorge, is famous for its silversmiths and goldsmiths, who in addition to lovely jewelry, craft icons and traditional kitchenware. It continues on to historic Dimitsana, a prosperous village in the years leading up to the Greek War of Independence. The water that flows through Dimitsana powered mills, including a gunpowder mill, vital for the revolution. You can learn more about Dimitsana’s role in the revolution at both the Ecclesiastic Museum and the Town Library. Zygovisti is a smaller village, full of traditional charm and revolutionary pride. The trail continues through the small and tranquil villages of Elati and Vytina. Then on to Magouliana – a village of loggers, Valtesiniko – known for its excellent woodcarvers, and lastly Lagkadia – a village of stone builders.

Cultural Sights along the Menalon Trail

This region of the Peloponnese is rich in history as well as monuments. In addition to the seven enchanting traditional villages, there are many sights of cultural and historic interest along the Menalon Trail. 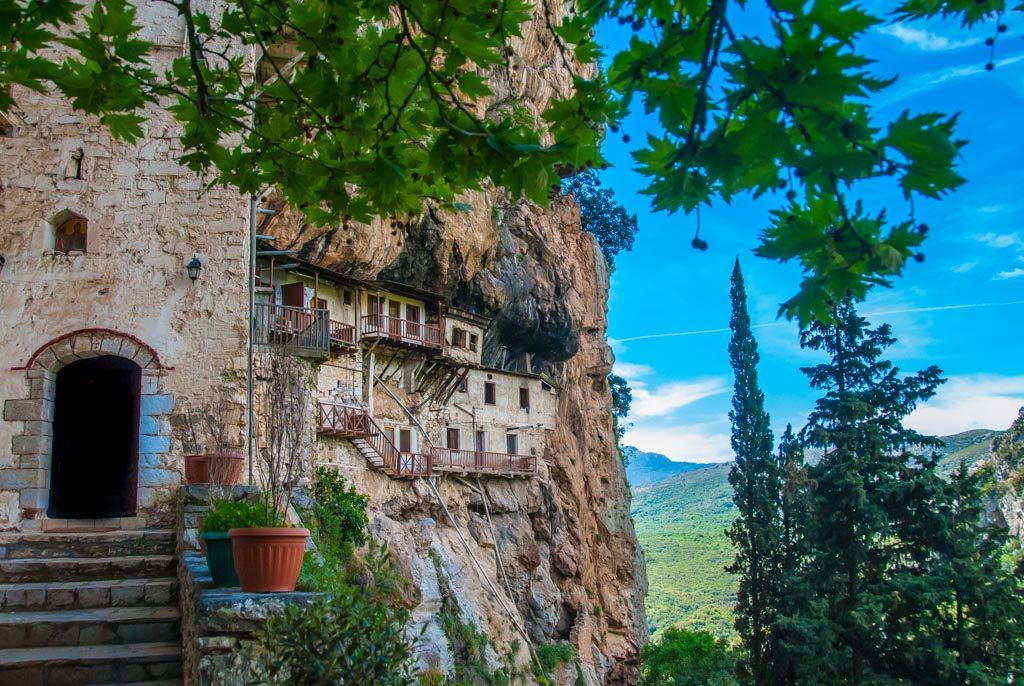 There are many beautiful historic monasteries. On the first section of the trail, between Stemnitsa and Dimitsana, the path leads initially to the Prodromos Monastery. It is built dramatically onto a cliff facing the Loussios canyon. Continuing on, one sees both  the “old” and he “new” Philosophou monasteries – dating from 963 and 1691 respectively. On the Nymfasia to Magouliana section of the trail is the fantastic Kernitsas Monastery, one of the oldest monasteries of the region of Gortyna (ca 1105). It is built into a massive boulder, and has a cave in which, according to legend, a miraculous icon of the Virgin Mary was found. Country chapels are also seen en route, like the Churches of Agios Giorgos and Zoodochos Pigi, in the section of the trail that leads from Zygovitsi to Elati, and Agia Triada, located between Valtesiniko and Lagkadia. 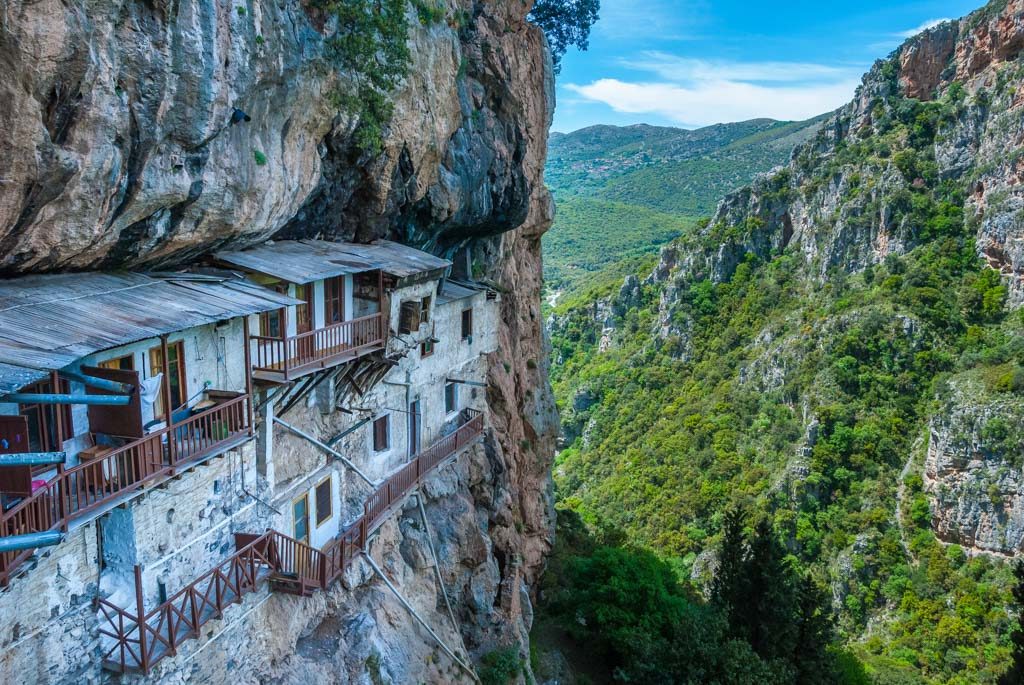 Lovers of Greek history will also find this a fascinating region. Arcadia figured prominently in the history of the Greek War of Independence, not least as this was the home of the famous Greek general and revolutionary leader Theodoros Kolokotronis. His home is in Libovisi, a town very close to Elati. The town where the trail begins – Stemnitsa – was the home of the “First Peloponnese State” – the first government of revolutionary Greece. In Zygovisti, you can see the “Monument of the Immortals” – the 200 young men who formed the personal guard of Kolokotronis during the Revolution of 1821. These are places fundamental to the identity and history of modern Greece.

There are also traces of Ancient Greece along the trail. On the section from Elati to Vytina is Ellinika, where the Acropolis of the ancient city of Methydrion once stood. Byzantine history, too, is represented, in the Byzanine fortress of Lagkadia on the Valtesiniko – Lagkadia leg of the trail.

Natural Wonders along the Menalon Trail 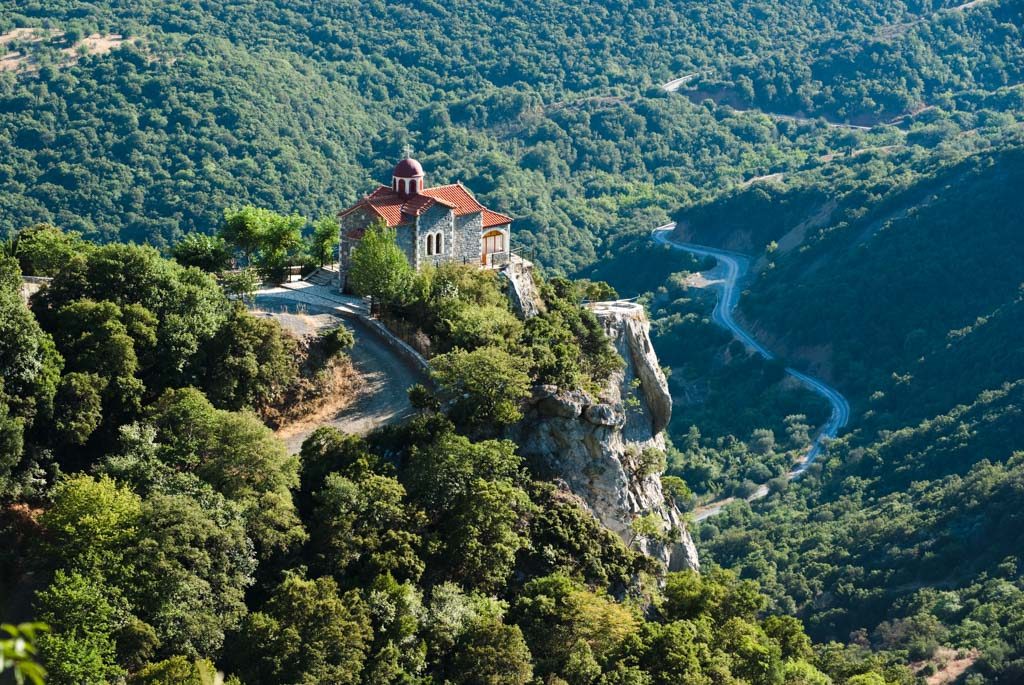 The rivers running through the region are crossed with historic stone bridges – a lovely sight in themselves. The Milaontas river in the area of Vytina has the lovely, high-arched, Zarzi bridge. Near Dimitsana is a stone bridge of three arches, overgrown now with green and incorporated into the landscape. Watermills also abound en route – especially the Rapi water mills near the Kubliza spring, on the section of the trail that leads from Valtesiniko to Langkadia.

This is a rich natural habitat for many species, including rare species. Some of the animal life you may encounter along the Menalon trail include wild boar, hedgehogs, foxes, and weasels. The wild boar, interestingly, have been reintroduced to the region, having decreased on account of hunting. Birds also abound including dramatic birds of prey such as the short-toed snake eagle. Lizards, snakes, and two types of Greek turtle can also be seen.

Gastronomy along the Menalon Trail

Of course, such natural abundance translates to some excellent country cuisine. Local specialties include goat and lamb that have grazed on wild herbs and make wonderful braises and stews. Dairy products here are also exceptional, particularly local cheeses. For a classic Arcadian dish there is also “pasto” – a fragrant smoked pork. Trahana – a rustic pasta made of wheat and fermented milk – is a delicious and hearty dish. 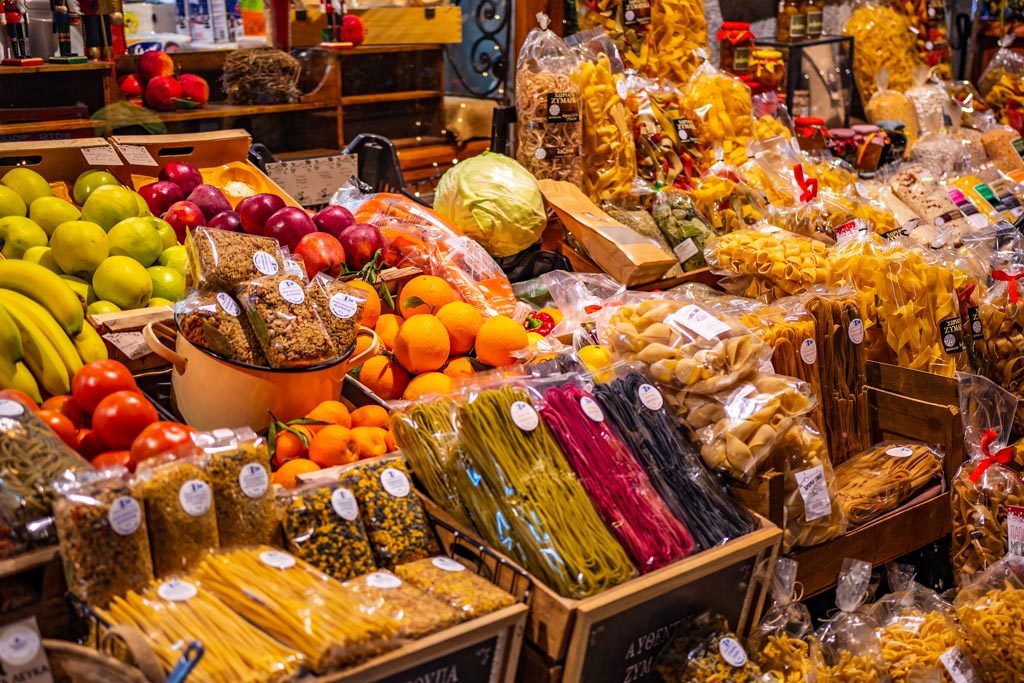 Mountainous areas in Greece in general are known for the excellence of their pies and Arcadia is no exception. The sweet pies, like “galatopita” – milk pie – make a wonderful breakfast along with some wild-gathered mountain tea before you set off for a day in nature.

Certification of the Menalon Trail

This spectacular hiking route is one of 14 trails certified by the ERA – the European Ramblers Association. The certification process takes a number of important factors into consideration, including environmental protection and careful maintenance. The trail is very well marked, and each section of the route is rated for relative difficulty on a scale of 1 to 5.

Staying along the Menalon Trail 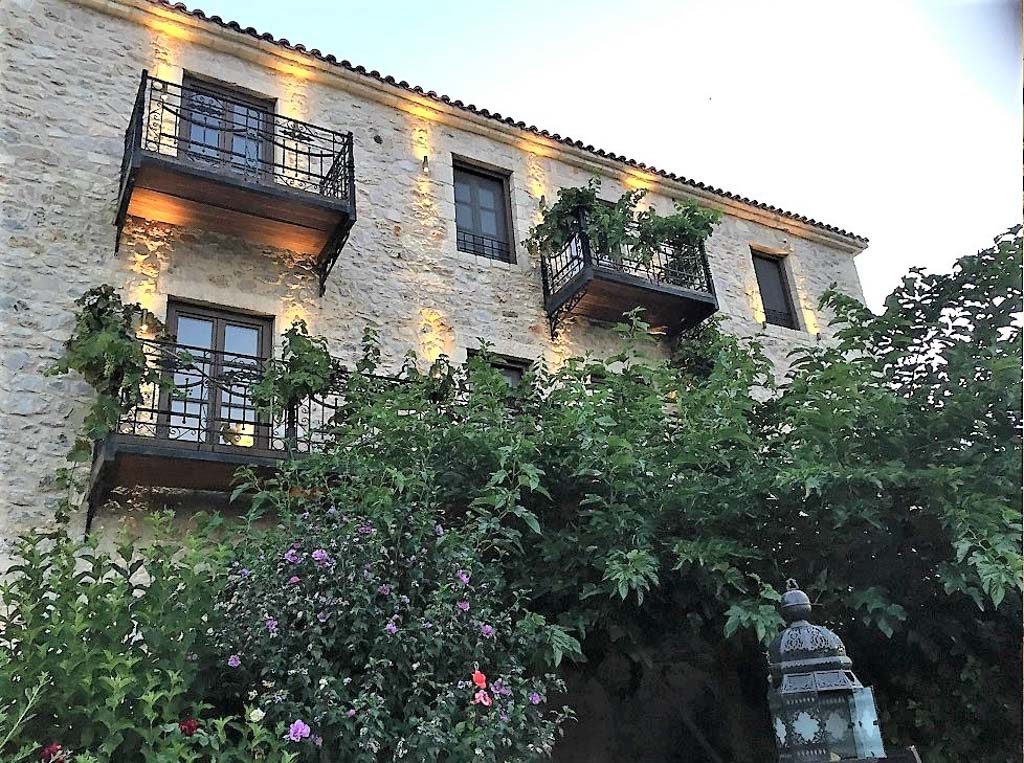 This region of traditional stone architecture has many beautiful rustic guest houses as well as excellent boutique accommodations that capture the unique style of the region. Hiking the Menalon Trail in whole or in part is a delightful combination of vigorous activity in nature and civilized comforts. 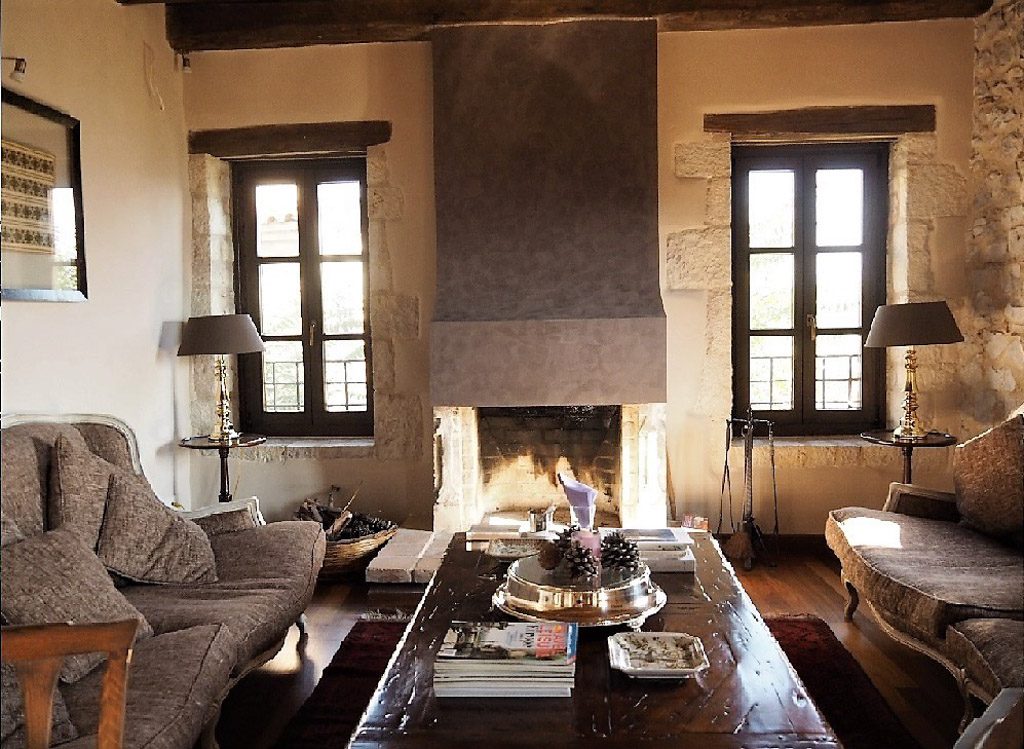 When to Hike the Menalon Trail

Fall and Spring are the ideal seasons for taking in this wonderful hike. In the fall, the intense sun of summer has given way to moderate temperatures of bracing mornings and sweet afternoons. And the fall leaves glow in shades of gold and red. In the spring, nature in Greece is in full flourish, with bountiful wildflowers and trees in glorious bloom.

This is a wonderful way to experience the natural beauty of Greece, along with historic sights of many eras. It is also a great way to get in touch with Greek culture, by tasting excellent local cuisine, and experiencing the beauty of the traditional architecture of Arcadia. A hiking holiday will leave you serene, recharged, and in superb shape.

Have you ever had a hiking holiday in Greece?