The Kalamata International Dance Festival has been one of the Peloponnese’s premier cultural institutions for a quarter of a century. The festival is the key event of the Kalamata dance center, founded in 1995. It brings together both famous international figures in the world of contemporary dance, while also promoting Greek creativity. In addition to a calendar of inspiring performances, there are also video performances, workshops, talks, and publications. At this summer’s session – the 26th – audiences can see the choreographers and performers Viktor Černický (Czech Republic), Wim Vandekeybus (Belgium), Israel Galván (a modern Flamenco artist from Spain), kóka&panú (Greece), and Lali Ayguadé and Guilhem Chatir (Spain and France, respectively), among others.

Kalamata, deep in the southern Peloponnese in the curve of the gulf of Messinia, is one of Greece’s loveliest cities. It is also in the heart of a fascinating region of Greece, full of cultural activities and pleasing diversions.

For culture, Kalamata is an excellent starting point for discovering more of Greece’s rich Ancient past. 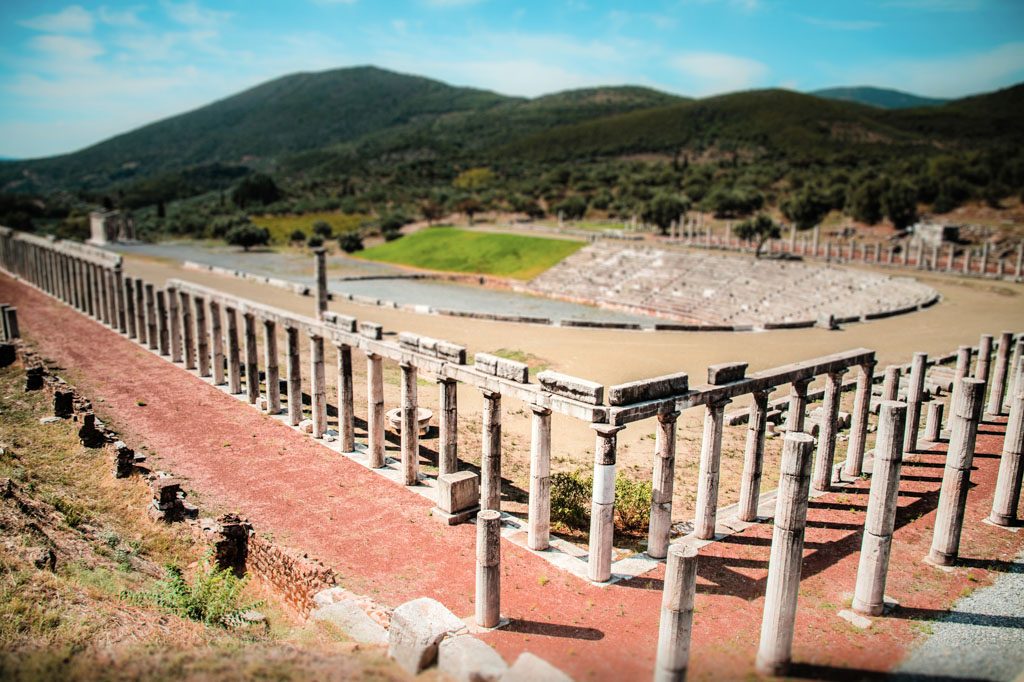 Not nearly as well known as other ancient sights, Ancient Messene is a marvelous surprise. This 4th century BC city (established in 369 BC) was untouched by later civilizations, and because of this, it is stunningly intact. The glorious city was built by General Epimanondas of Thebes, who defeated the Spartans. Highlights of Ancient Messene include a marvelous theater, an Agora, and a stadium, as well as other structures. Altogether, it offers a splendid overview of a glorious ancient city.

The Palace of Nestor

The best preserved Mycenaean Palace of Greece, the Palace of Nestor is a fascinating sight. Nestor’ palace in “Sandy Pylos” – as referred to in the Iliad and the Odyssey – features a large throne room with a circular hearth, 4 main buildings, and other smaller buildings. Fine wall paintings and many tablets inscribed in Linear B – the earliest known Greek script – were found here.

The Glorious Castles of the Peloponnese 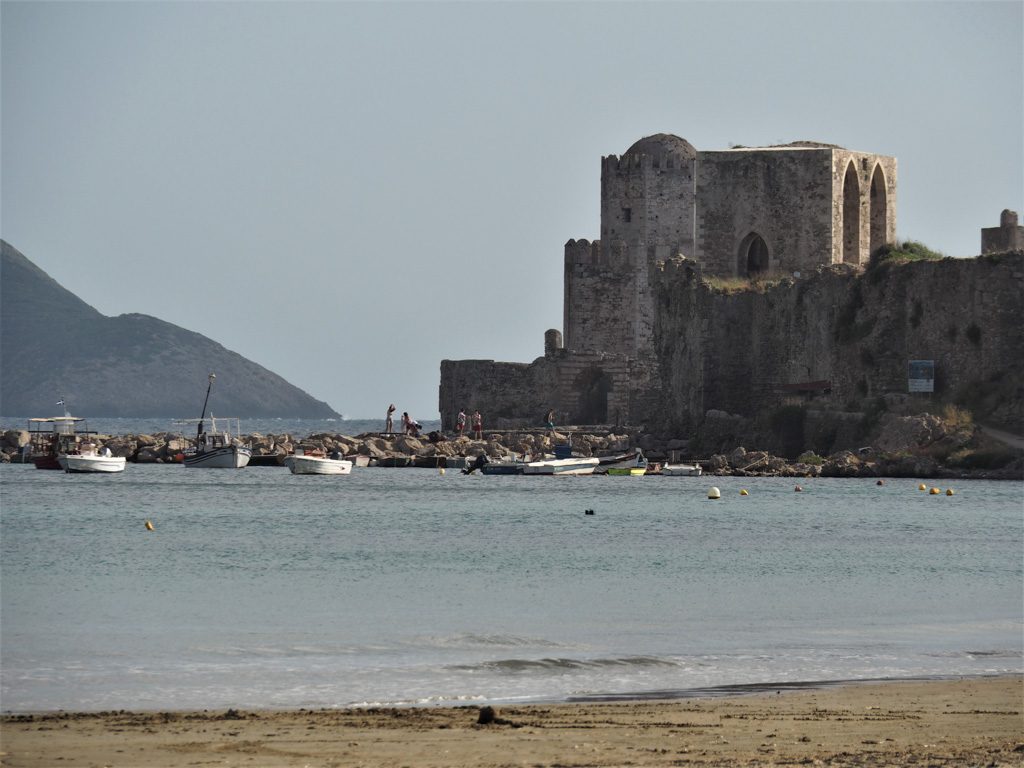 The fortifications of the Venetians and the Ottomans rank among other beautiful sights in the Peloponnese, adding a great historic variety to the cultural offerings. The easternmost leg of the Peloponnese gave strategic access to essential waterways for trade, giving these spots the nickname the “Eyes of Venice.”  Naturally, these were coveted points, and needed fortification.

This 13th century castle overlooks the Akritas cape in the gulf of Messinia. The large fortress – a splendid example of Venetian fortress architecture – included houses and churches. Keeping the citizenry safe from pirate attacks.

One of the loveliest castles of Greece, the castle of Methoni includes a fortified islet,  called “Bourtzi” – like the fortified islet of Nafplion. The early 13th century is incredibly impressive. 14 stone arches connect the castle – built on a rocky promontory – to the shore. Venice’s patron saint – St. Mark – is represented by the Lion at the castle’s gate. Castle of Methoni is connected to the mainland only by a narrow road. The fortified islet Bourtzi was built in 1500. It looks absolutely enchanting now, but in its day this was used by the ottomans as a prison and a place of execution.

Also called Neokastro – “new castle” – Pylos castle was built by the Ottomans in 1573, after their defeat at the hands of the Holy League (united Catholic states under Pope Pius V) in the battle of Lepanto in Nafpaktos.

This was a serious fortress, built with thick walls to withstand assault by modern weaponry. The citadel included six pentagonal bastions and nearly 60 cannons on its ramparts. Inside the castle of Pylos, there are houses, public buildings, and a former mosque, which was converted into the Church of the Transfiguration of the Savior after the liberation of Greece from the Ottoman Empire. 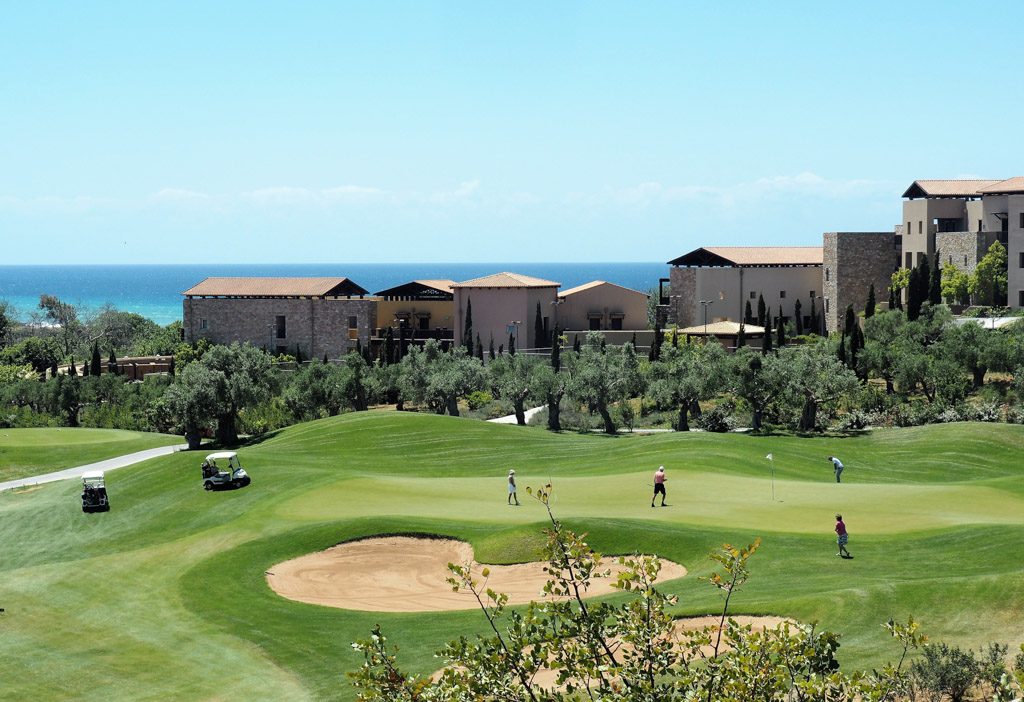 The Bay of Navarino is one of the more elegant destinations in Greece for sophisticated leisure activities.

This storied bay off the coast of Messinia features islets and secluded beaches with pristine waters, fascinating to explore by boat. Private yacht chartering can be arranged for you to enjoy an idyllic excursion.

The superb and world-famous resort Costa Navarino offers outstanding golfing on two courses. Olive groves and undulating green fairways are the setting of the 18-hole, award-winning Dunes course, which features gorgeous views of the sea.

The 18-hole Bay course provides a varied landscape for the golfer. It combines seaside, grove, and canyon landscapes, with alternating views of mountains and sea.

This gorge has a promising name, for “Limnos” means lake, and “poly” means many. There are actually 15 small lakes in this refreshing gorge. And not only – there are also many waterfalls along this lovely hike of about three kilometers. You might want to bring a bathing suit along so you can refresh yourself in the pure and bracingly cool waters along the way. 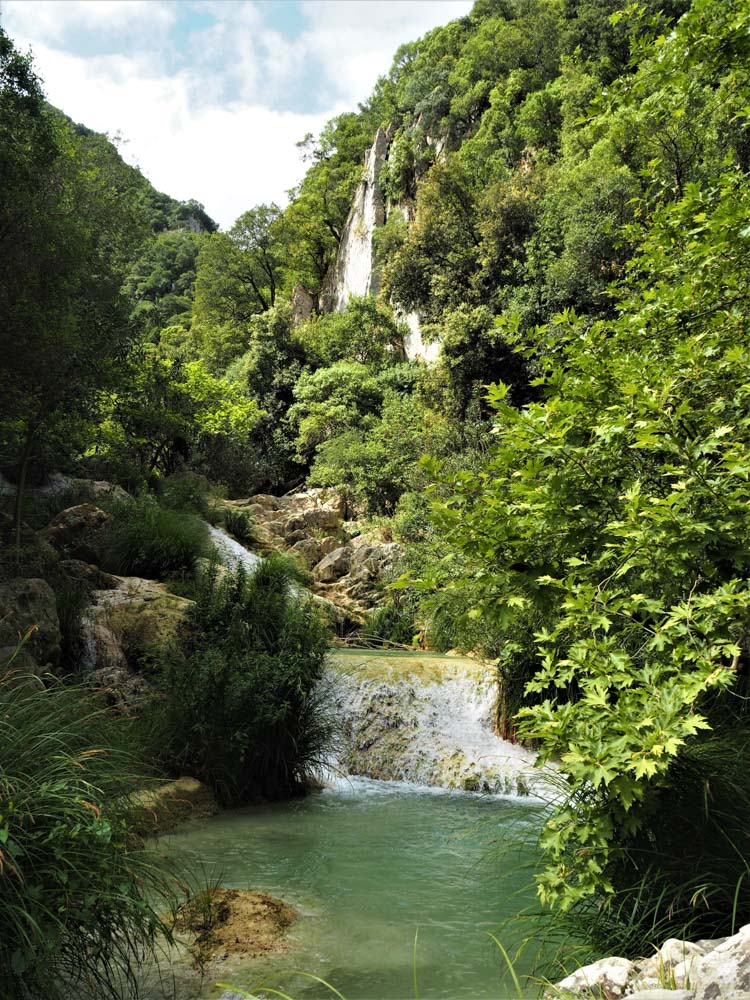 Swimming at some of the Finest Beaches of Greece

Silky sands and waters of the most astonishing shades of blue and green, and unparalleled natural settings make the beaches of the southern Peloponnese truly special. Here are some of the finest beaches in the Messinia region. 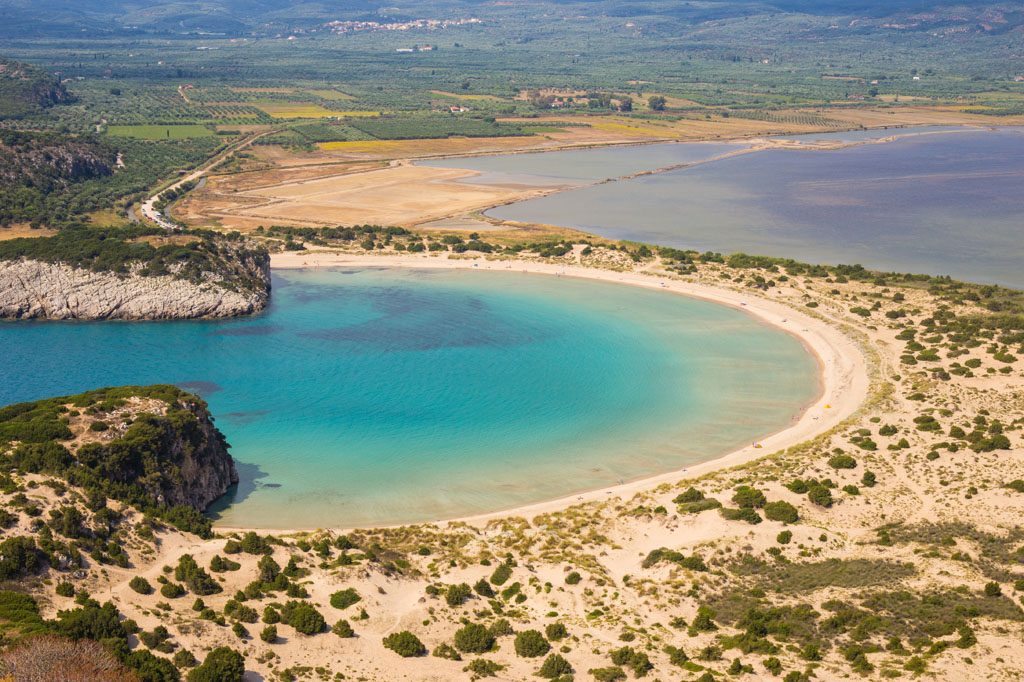 What an astonishing sight – from the sky, you would think Voidokilia beach was drawn by a compass of the gods, as it makes a perfect letter “Omega.”  The pure sands form a strip of dunes, with the pristine beach on one side, and the Gialova Lagoon – a rich bird habitat – on the other.

If all this is not temptation enough, you’ll find more history here too. Voidokilia is in fact thought to be the Sandy Pylos referred to in the Odyssey. Nestor’s cave is above, and this is where naughty young Hermes hid the calves he stole from his brother Apollo. Above Nestor’s Cave is the “Palaiokastro” – the Old Castle of Navarino.

Literally “Good Water” – this beach lives up to its name. The crystal clear waters are ideal for a swim or watersports. And as the beach is 14 kilometers long, you have the chance to find your own ideal spot. Kaifas beach, in the northern section of Kalo Nero, is a broad beach of golden sands that is thought to be one of the loveliest sections.

A Taste of Village Life

To get a real feel for the area, you can visit one of the lovely traditional villages of the region. One perfect choice is the famous Kardamyli, south of Kalamata, on the famous Mani Peninsula. The distinctive Maniote architecture features stone towers – each family had its own imposing fortress. 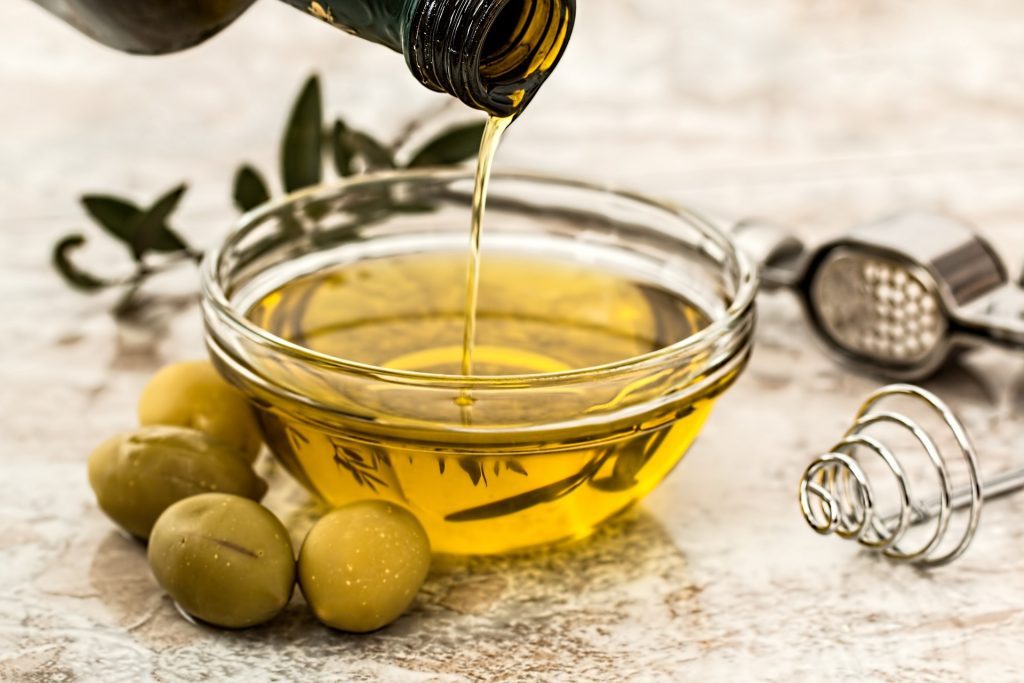 Some of Greece’s very finest olive oil – and that is really saying something – comes from the Peloponnese. The Koronneiki olive is the most common, producing exceptional oils. You can learn more about the culture and production of Greece’s most historic crop since ancient times.

The Peloponnese has wonderful indigenous dishes for you to try. Lalagia sound deceptively simple – they are just fried strips of dough. However, the dough is fragrant with orange and cinnamon and other secrets depending on the cook. What’s more interesting is the way they are fried – the fingers shape the dough as it meets the hot oil, forming shapes and often letters, for a personalized touch.

Kagianas in Messinia goes by the name strapatsada elsewhere. Again, purity and simplicity defines the excellence of Peloponnesian cuisine. This combination of farm-fresh eggs, sweet tomatoes, and the fragrant wild herbs of the landscape is incredibly delicious.

Carnivores, too, will be delighted. Pork is popular throughout Greece. But the Kalamatans have a particular way with it. They are famous for a particularly luscious and crackling roast.

Staying in the Southern Peloponnese 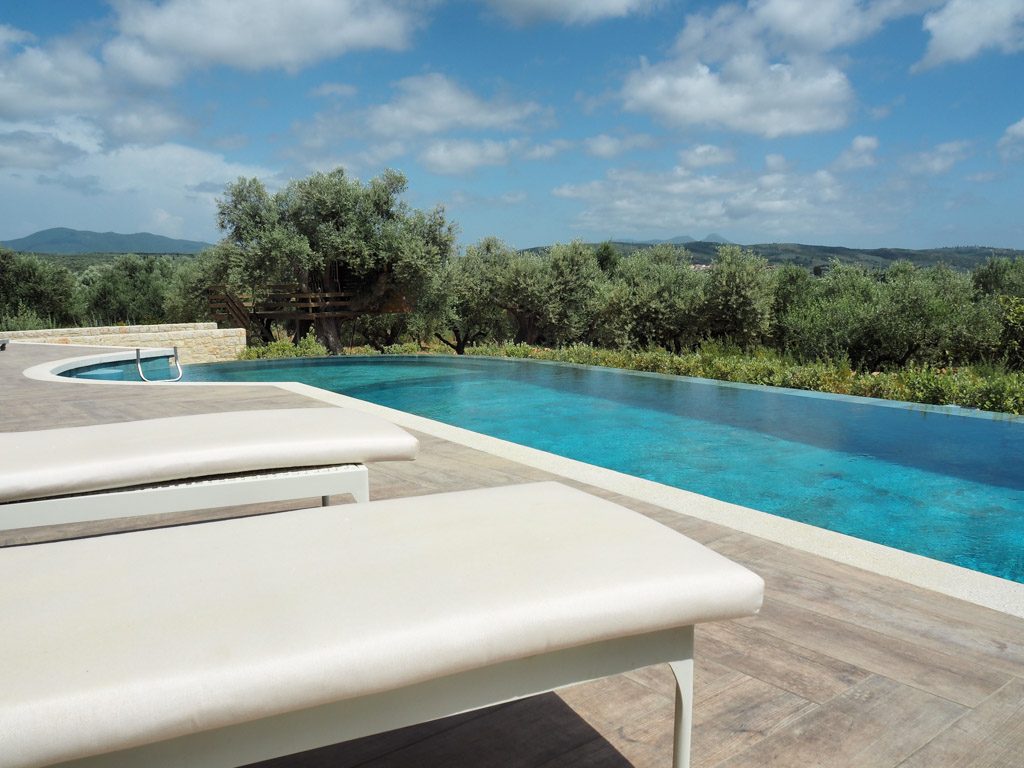 This is an unspoiled area of Greece, but by no means an unsophisticated one. Some of Greece’s most famous luxury accommodations are here. And one can also find a number of stylish boutique hotels, which capture the authentic character of this historic region, while appealing to the wishes of the contemporary traveler. There are also exclusive and elegant villas that are perfect for a private holiday.

Have you ever been to Kalamata?