The Summer Cultural Season in Athens provides a unique opportunity to enjoy both some exciting events as well as the beauty of a warm Mediterranean evening.

The Athens open-air film festival is the perfect example of this uniquely Greek union of culture, nature, and art.

The festival builds on a beloved and ingrained Greek summer tradition – the open-air cinema. As frequent travellers to Greece know, one of the simple yet profound pleasures of the Greek summer is enjoying a film at a garden cinema, which one finds all over the cities and also in smaller towns. The custom dates back generations.

The Athens Open Air Film Festival expands on this tradition in two significant ways. Firstly, the program of films is itself intriguing. Aficionados of the seventh art will be delighted with the selection of thought-provoking films from the pioneering giants of art cinema over the decades, figures such as Luis Bunuel, Frederiko Fellini, Akira Kurasawa, and Michaelangelo Antonioni. The intriguing program also includes more accessible, crowd-pleasing classics, with films from Alfred Hitchock, Stephen Frears, and others. In an era when streaming makes most any movie available to us, it remains very special to see a classic – especially with exceptional cinematography – on the big screen, in the company of other viewers.

But the second way that the Athens Open Air Film Festival expands on this great Greek cultural tradition is in the choice of venues. Truly, the garden cinemas with chairs nestled in white gravel, surrounded by boughs of bougainvillea are enchanting enough. But this summer festival also makes use of unique venues throughout Athens, worthy in themselves of a visit. These venues have a huge range of moods, encompassing the whole of the beautifully complex urban landscape of Athens. 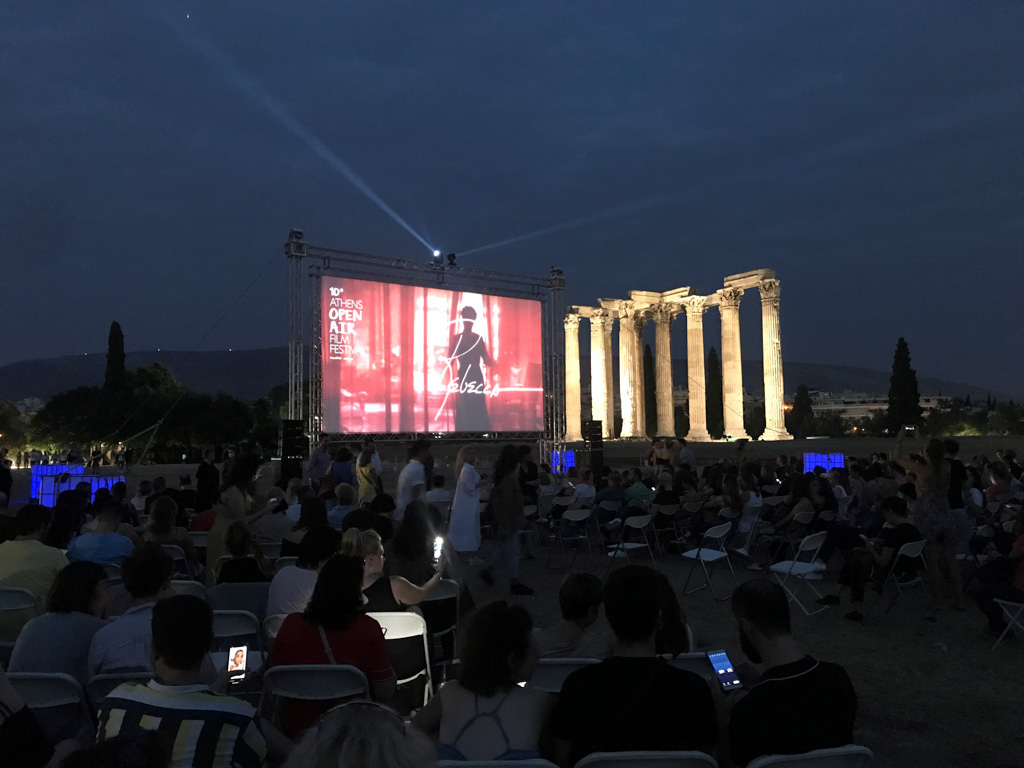 Some of the films will be screened at famous archaeological sites such as the Temple of Olympian Zeus, Plato’s Academy Park, and the Roman Agora (and also the small Theater of Epidaurus, for those who would enjoy an evening out of town). Others are famous sites in Athens, such as Lycabettus Hill, the pedestrian zone of Dionysiou Areopagitou, and Avissinias Square of Monastiraki. Museums, too, join in the celebration, with screenings at the Numismatic Museum and the Byzantine Museum. All the more interesting still are the places many visitors – and, for that matter, locals – often do not visit in the course of the year. These take us to various neighborhoods of Athens, and include the lovely grounds of the French Institute between Kolonaki and Exarchia, and the Tower of the Duchess of Plaisance in Penteli. Other alternative venues such as a former factory and a basketball court will host screenings. 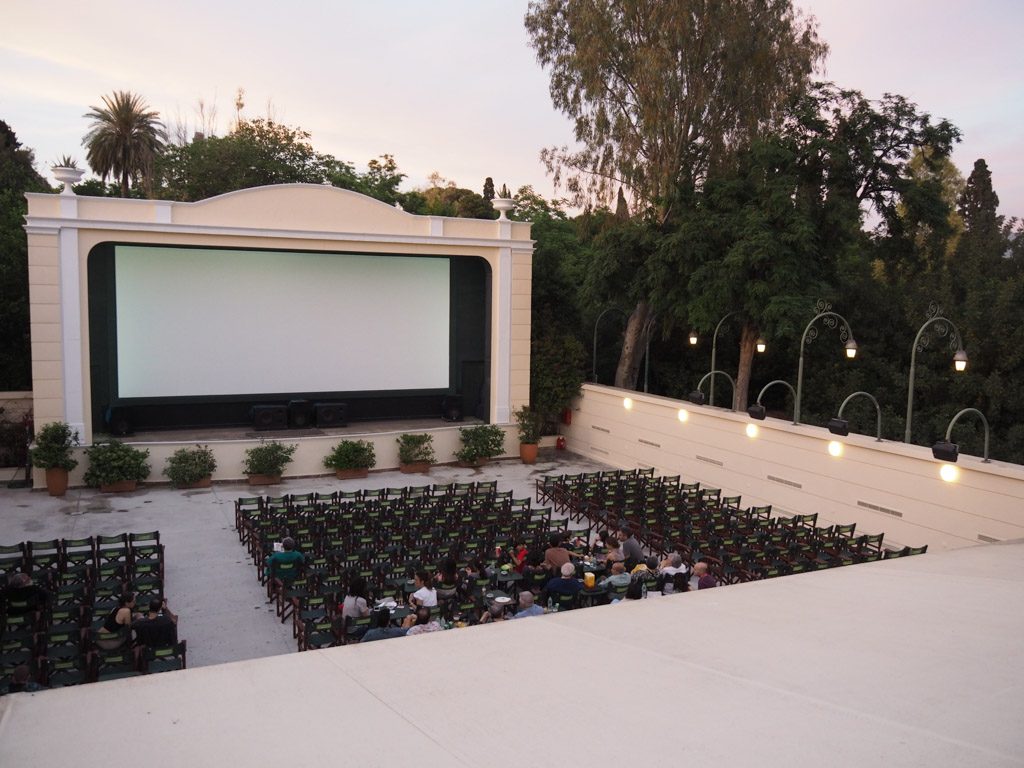 Of course, parallel to these special screenings, there is also a large selection of first-run and classic films screening every night. The classic outdoor cinemas of Athens also offer visitors a full program. Moreover, there is a splendid choice of summer cinemas in Athens.

The Thisseon regularly tops international lists of the most fabulous movie theaters in the world – this thanks no doubt to its stellar views of the Acropolis. But even without the views, the Thision Open Air Cinema would be a beloved Athenian classic, thanks to its lovely garden seating and quality sound and screen. The Paris Cinema is another classic- rooftop cinema in the heart of Plaka. In the National Gardens you’ll find yet another cinema- the Aigli cinema is right next to the Zappeion. As a bonus, you’ll find a charming outdoor cafe attached for a pre-cinema snack or après-cinema nightcap.

Besides these famous Athenian outdoor cinemas, there are also plenty of local options. The lush and leafy, well-heeled suburb Kifissia has both the Bomboniera Cinema and the Cinema Chloe. Alternatively, you can catch the sea breezes at the Flisvos cinema, in the Flisvos Marina Park in Palaio Faliro. 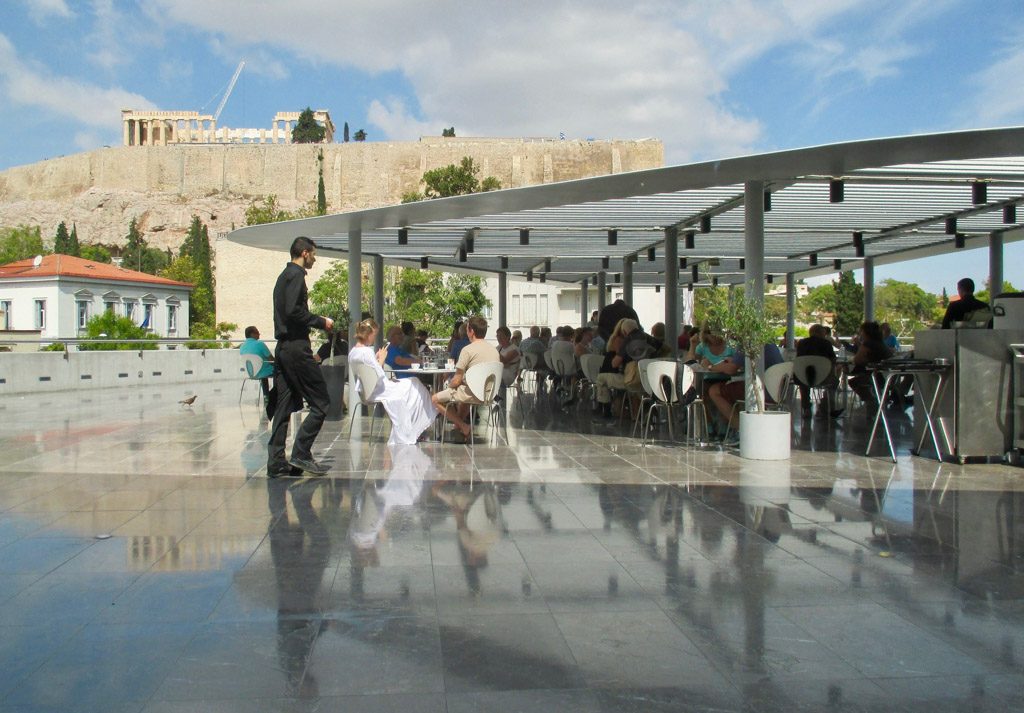 There are also more classic ways to simply enjoy the Athenian evening just like the locals do. There are many fabulous rooftop restaurants, clubs, and bars in Athens, which boast extraordinary views (often of the Parthenon). From delightfully innovative gourmet meals directly across from the Acropolis, to famous hotel bars with sweeping panoramic views of all of the city, to alternative cultural centers with a youthful energy, Athens has many venues for a glamorous night out under the stars.

And of course the Athenian Riviera is just as enticing. You can trade Acropolis views for vistas of the sea at a host of elegant clubs, bars, and restaurants that are both invitingly at the water’s edge and an easy distance from the center of Athens.

Athenians, too, do love their rooftops bars and restaurants. But for an even more local experience, you may want to simply head for a “plateia.” The plateia – or square – is the heart of a neighborhood, and the place everyone congregates at dusk and into the night. Your classic Greek plateia will have cafes and ouzeries and simple tavernas with tables around the square. The restaurants here cater to the locals and often they have generations of tradition behind them. These are fine places to enjoy a traditional taste of Athens – untouched by time, and deliciously so. While you dine and drink, the neighborhood life swirls pleasantly around you. 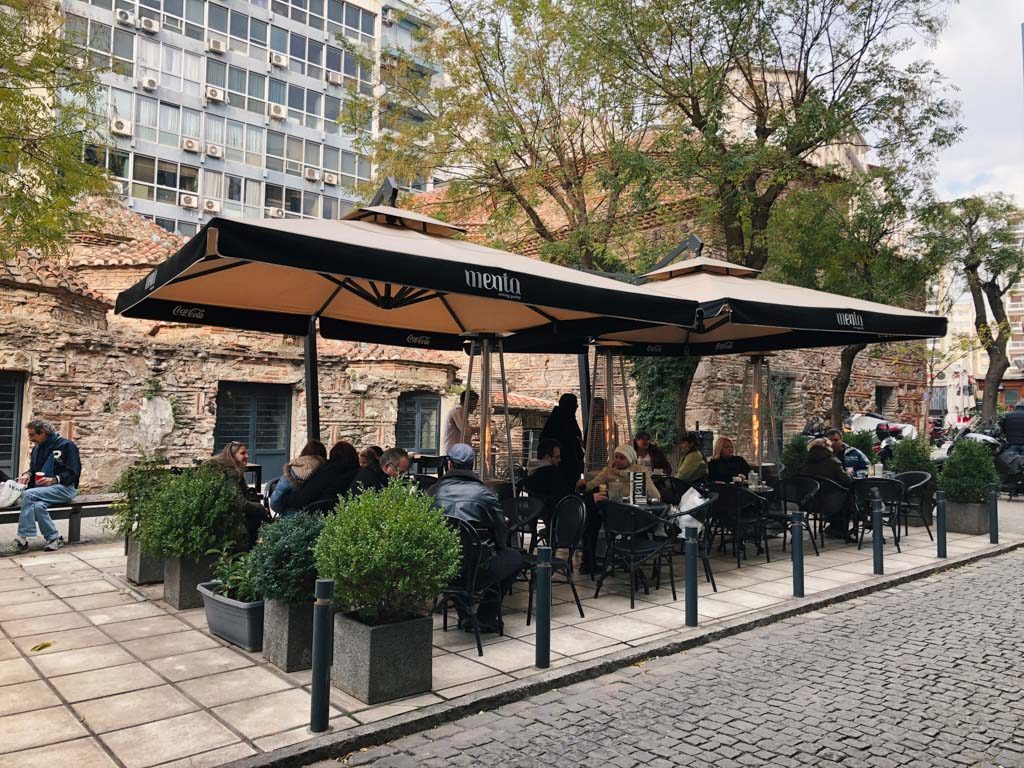 While the plateias of the Plaka are famously charming, you may want to discover a more local Athenian flavor by trying some of the more pleasant of the neighborhoods surrounding the center. Pangrati – next to Kalimarmaro – is a neighborhood of tree-lined streets and shady squares- perfect for the souvlaki-retsina experience. Kolonaki provides the neighborhood vibe with a chic and elegant twist. The southern suburb of Nea Smyrni has a lovely square, and so does green and shady Kifissia in the north.

Have you ever been to the outdoor cinema in Athens? Or enjoyed other simple summer pleasures in the balmy Athenian night?