The second Andros on Foot festival will take place in October. It’s the perfect occasion, and the ideal season, to explore this fantastic island.

Getting to Know Andros

This northernmost island of the Cyclades, and the second largest (behind Naxos), has a discreetly aristocratic atmosphere. This is thanks to the elegance of the neoclassical architecture of Chora – Andros’ main town. And that, in turn, is thanks to its noble maritime history.

A Brief History of Andros

Andros, like the rest of the Cyclades, was fought over, conquered, raided by the Saracens, and ruled by foreign powers – Venice, the Ottoman Empire – for centuries. It did have a period of prosperity during the Byzantine era, particularly during the Komnenos Dynasty, thanks to a flourishing production and export of silk. Under Ottoman rule (1566 – 1821), Andros, as a province of the empire – along with the rest of the Cyclades – was granted religious freedom, some measure of local autonomy, and lower taxes. As such, there were already local merchants and shipowners with some prosperity. 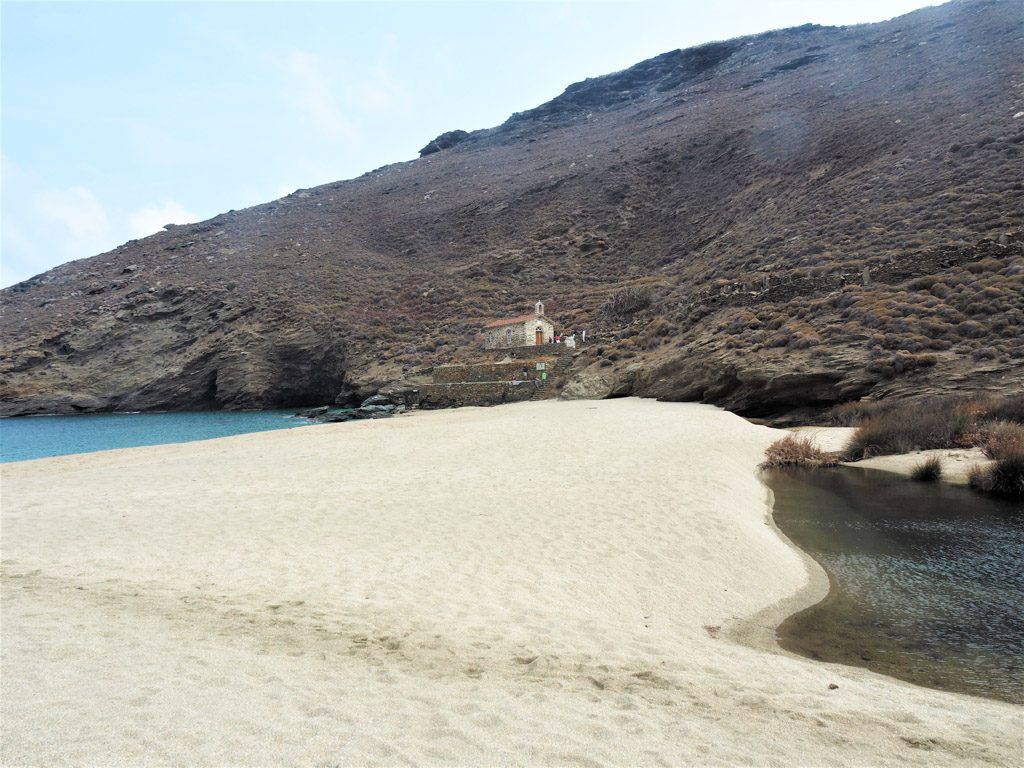 It was during the Greek War of Independence that the people of Andros were able to shine, contributing to build a Greek Navy to fight the Ottomans. Andros became part of the new Greek state – the Kingdom of Greece – at the end of the war.

Andros as a Shipping Power

After the war, the shipping industry on Andros grew quickly. After the war of Independence, other shipping centers like Hydra and Galaxidi began to decline. Andros – strengthened further by the arrival of refugees from the island of Psara – near Chios (Psara, like much of northern Greece, remained under Ottoman control until 1912) – rose. It was during this era that many shipowners built such lovely mansions in the Chora. Shipping in Andros continued to rise. By the beginning of WWI, the capacity of the ships of Andros was second in all Greece. By the beginning of WWII, there were 80 ships registered to Andros. The industry has since subsided, due to wartime losses, the emigration of ship owners to Piraeus and London, and the internationalization of the shipping industry. 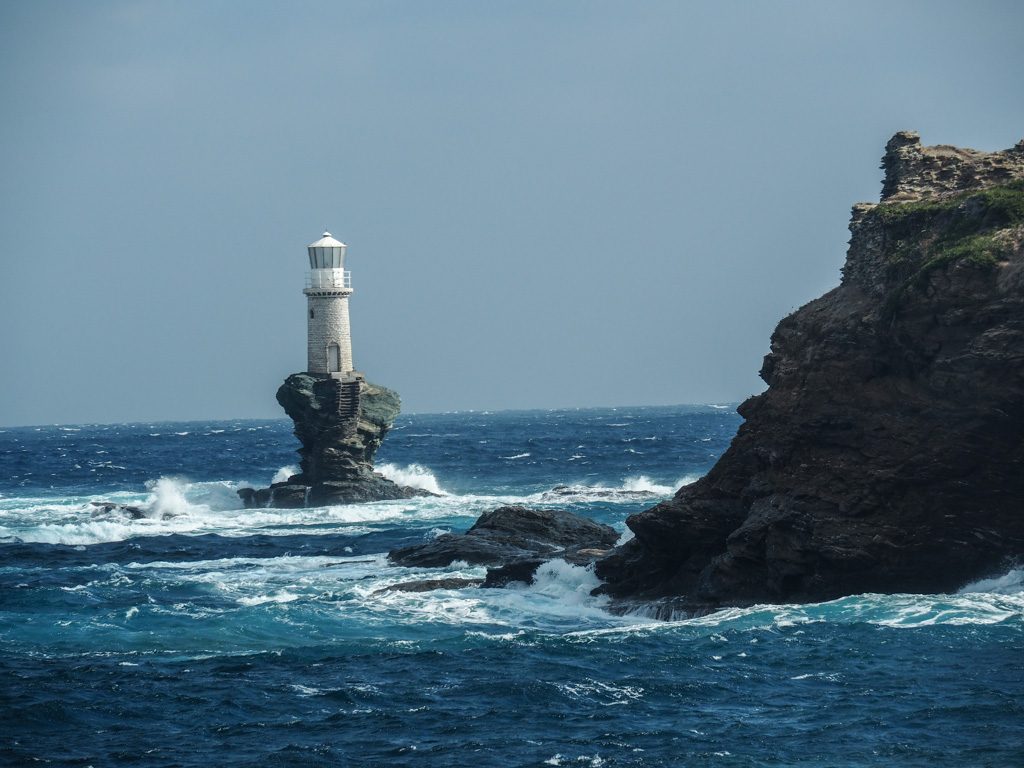 But the glorious and elegant legacy of this era remains. Prominent among these shipping families was the Goulandris family, whose generosity has enhanced the cultural landscape of Greece, and of the island of Andros.

This sophisticated island has a jewel of a museum for modern art. Established by the Vassilis and Elisa Goulandris Foundation in 1979, at the Contemporary Art Museum of Andros you can see works by iconic 20th International artists – Picasso, Toulouse-Lautrec, Matisse, Chagall, and others. This is also an excellent place to see the works of prominent and internationally known Greek modern artists like Moralis, Gaitis, Engonopoulos, and Zongolopoulos.

The Kydonieos Foundation is an intellectual and cultural center focusing on all the arts- dance, music, literature, theatre, and the visual and plastic arts. They organize cultural events throughout the summer season. Bibliophiles will enjoy the Kairios Library, with its 85,000 rare volumes, works of art, and ancient statuettes. 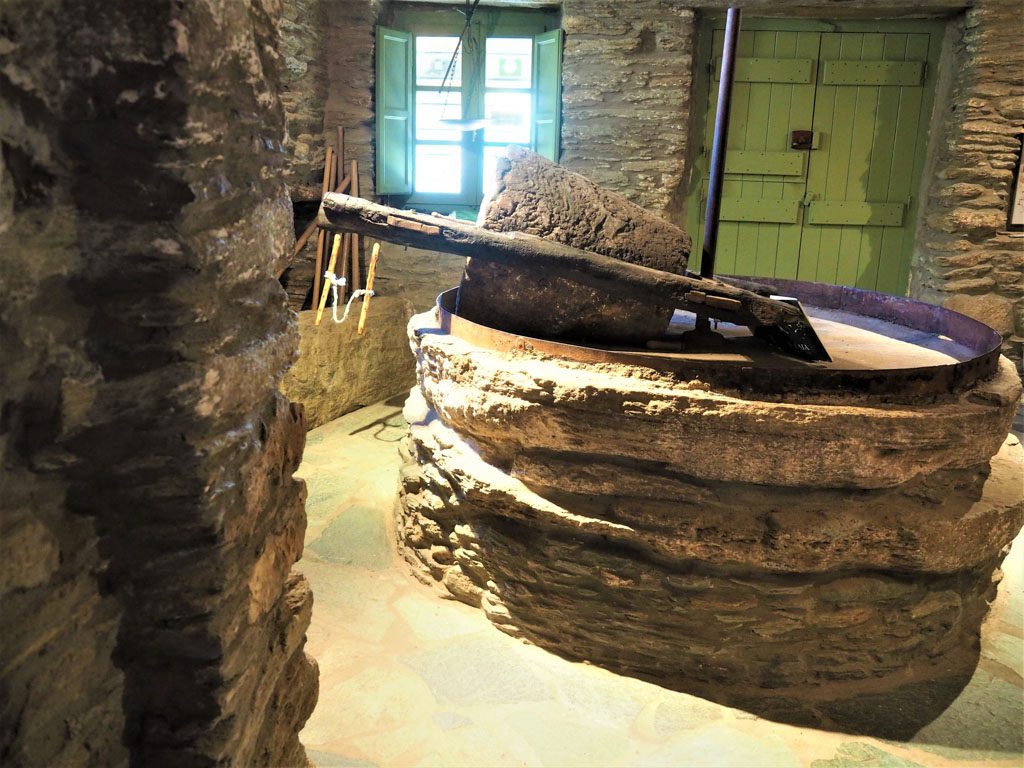 Additionally, Andros has not one but two Archaeological Museums – one in Chora, and one in Paleopolis. From the 6th century BC to the 6th century AD, this was the capital of the island. Here, you will find exhibits from the 5th millennium BC to late antiquity. Both of these museums were also established with the sponsorship of the Goulandris foundation.

The Beaches Of Andros 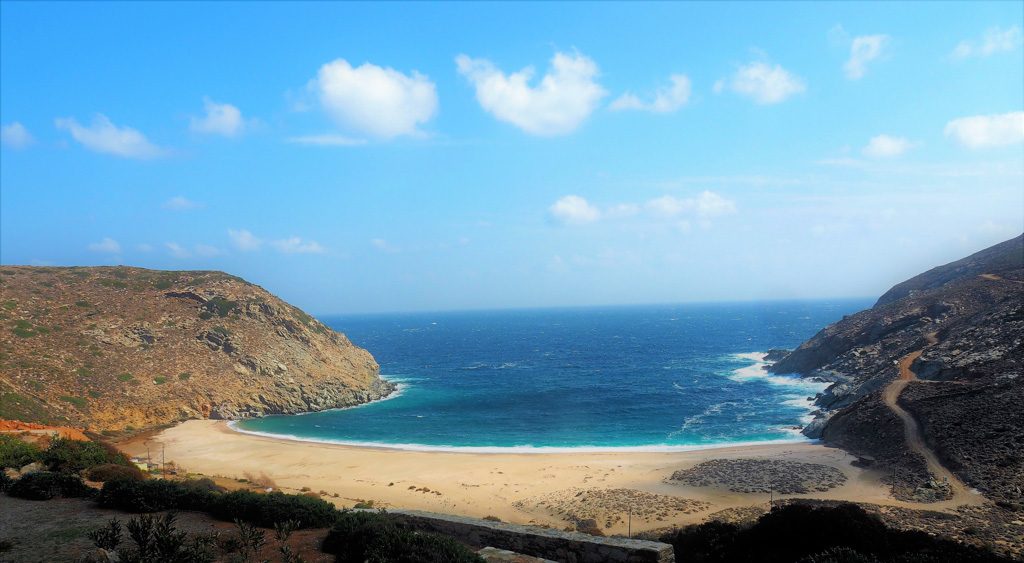 There are over 30 – beaches on Andros, and the variety is astonishing. Whatever your beach style – fully-serviced or rugged and remote – you will have a great variety of choices in Andros. Among the most famous beaches are Grias Pidima, with its striking and storied rock formation, the charming and gentle tree-lined Batsi, and Achla beach, which combines a beautiful beach with rich wetlands, a waterfall, and pools fed by the Achla springs. You will be sharing Achla beach with waterfowl and migratory birds.

The stylish restaurants of Andros are committed to local producers and gastronomic traditions, while also open to all trends and explorations in gastronomy, and it is a wonderful combination. Creative dishes are made with authentic ingredients and inspired by novel twists on gastronomic tradition. If you have a sweet tooth, you will particularly enjoy the local delights, inspired by the confectionary traditions of Alexandria and Constantinople. Besides spoon sweets with the island’s citrus, there are “amygdalota” of almonds and sugar, and “patitsakia” – a fluffy sweet of almond, sugar and egg, and the drink of bitter almond – “sumada,” among other local specialties. 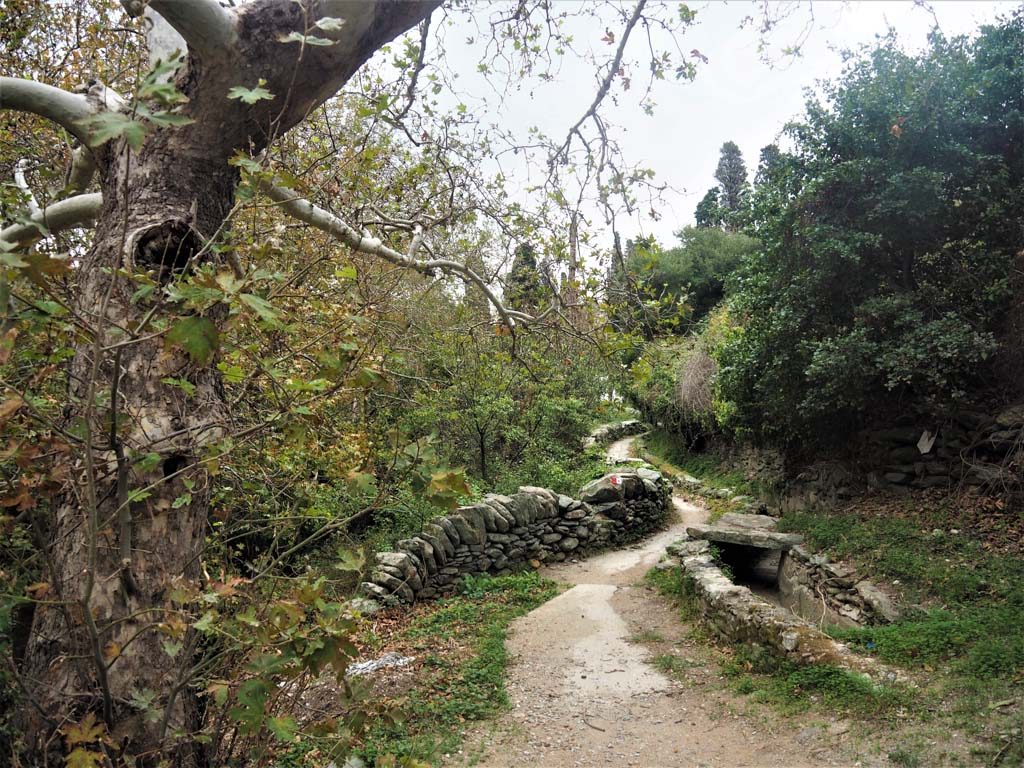 Andros is a paradise of nature and wildlife. Fed by rivers and springs, the island has a great variety of trees- willows, plane, mulberry, pine, poplars and oaks, among many.  It is a paradise for birds, small mammals, and amphibians.

The Hiking Trails of Andros

Andros takes its natural beauty seriously. Andros has one of the most extensive networks of hiking trails in all of Europe. There are 170 km of marked hiking trails in Andros. 100 km of these constitute the continuous route that was awarded the “European Leading Quality Trails – Best of Europe” in 2015. 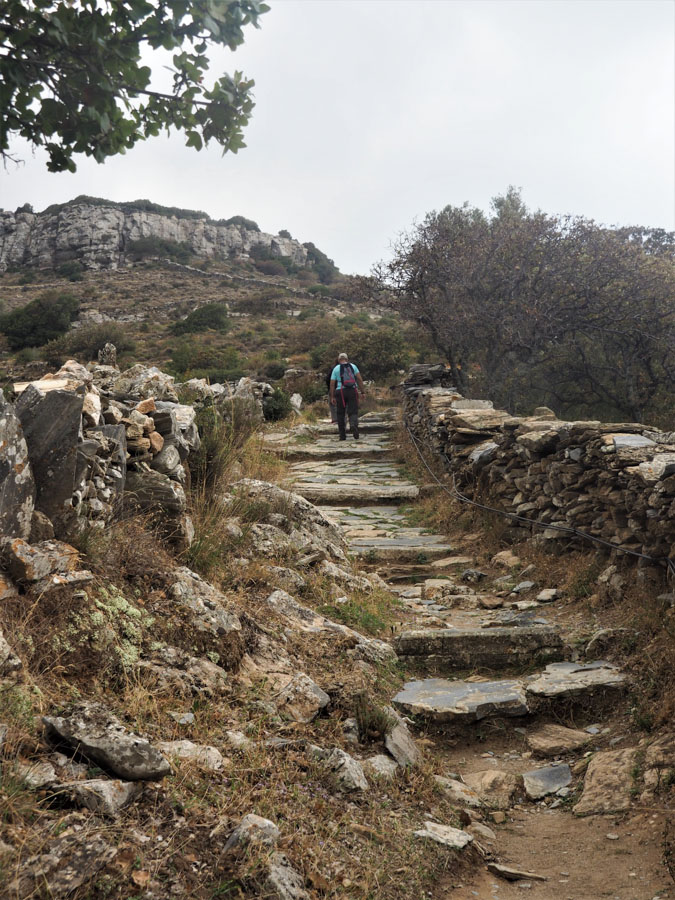 The Andros Route can be taken in sections, and the whole thing comfortably hiked over a ten day period. The great variety of landscape will bring you by waterfalls and alongside springs, canyons, and forests. And there are plenty of man-made structures along the way, beautiful watermills and windmills, arched bridges, and threshing floors that recall the island’s agricultural past.

Andros Routes is a marvelous initiative, primarily the work of ardent volunteers, seeking to preserve and record not just the astonishing natural beauty of the island but also record oral history and culture, and to promote sustainable tourism. Celebrating the Andros Route and the glorious nature and culture of the island is the Andros on Foot Festival. 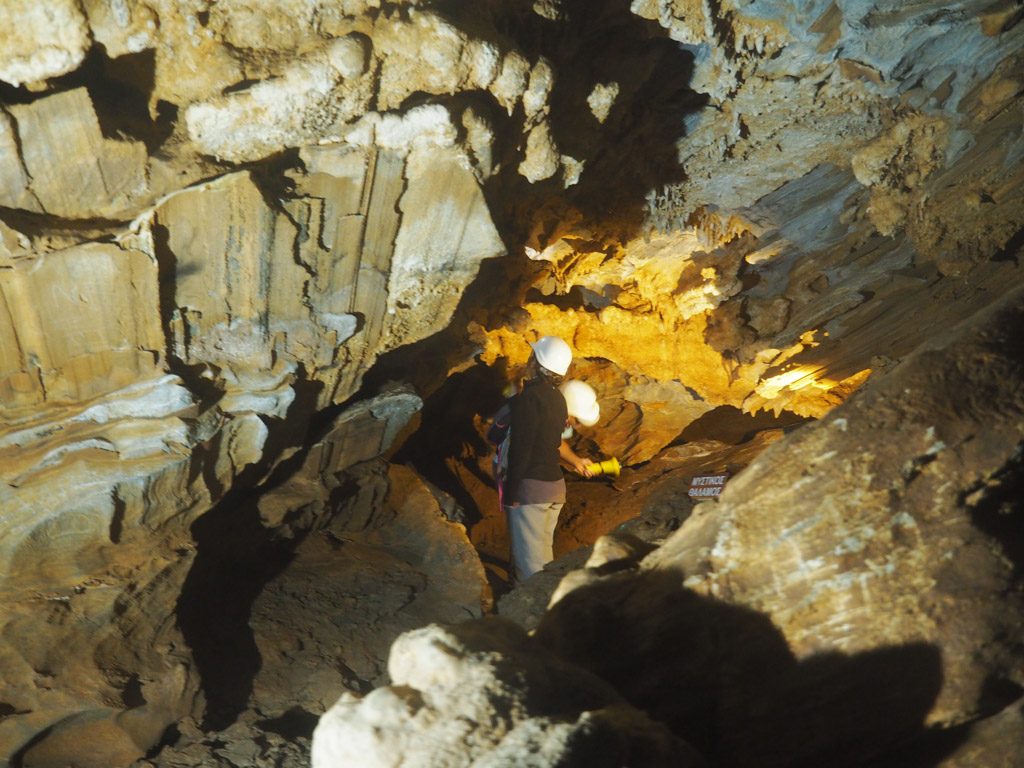 This is a fantastic time to visit Andros. A full 16 days of activities include – of course – plenty of excellent hiking. In addition, there will be a full program of related activities, including visits to monasteries, a guided tour by the WWF, visits to museums and archaeological sites, swimming and snorkeling, traditional games, music, a cinema screening (a wonderful period film set in Andros), and other activities. Naturally, this is all accompanied by traditional feasting on local produce and local gastronomy. It promises to be the ideal combination of adventure and activity, united with culture, gastronomy, and recreation.

Andros offers a unique island experience, and October is the perfect time to enjoy the island to the fullest, without the intense heat and the summer crowds.

Have you ever visited one of the Greek Islands in October?