One of the many wonderful things about Greece is the strong role that traditional culture continues to play in modern life. You’ll see this at any festive gathering of Greeks abroad, and celebrations in Greece. Weddings, saints’ days, Baptism parties, or any time the mood strikes – these are all occasions for celebrating life through traditional dance.

Additionally, traditional dance is an essential component of many public national and religious festivals. At such events, dancers wear traditional regional costumes, adding to the beauty of the performance. Very often, when men and women dance together, they alternate, which displays the costumes to even better advantage.

Greek dances are, for the most part, dances for groups of any size. And many of the dances are for men and women dancing together. They lend themselves to joyous group expression. While some of them are taxing and highly energetic, others are more flexible and less demanding – they can be enjoyed by all generations together. Many of these dances are also not that difficult to learn. The steps are largely not too complex.

The Kalamatianos is the most popular dance throughout Greece – one could say it is the national dance of Greece. This is very fitting, because the Kalamatiano actually has its roots in antiquity. Homer references a similar dance in the Iliad, and Xenophon describes a dance of the ancient Spartans that has similar characteristics. The modern Kalamatiano derives from the Syrtos of Peloponnese, and then came to take the name of the Peloponnesian city of Kalamata. 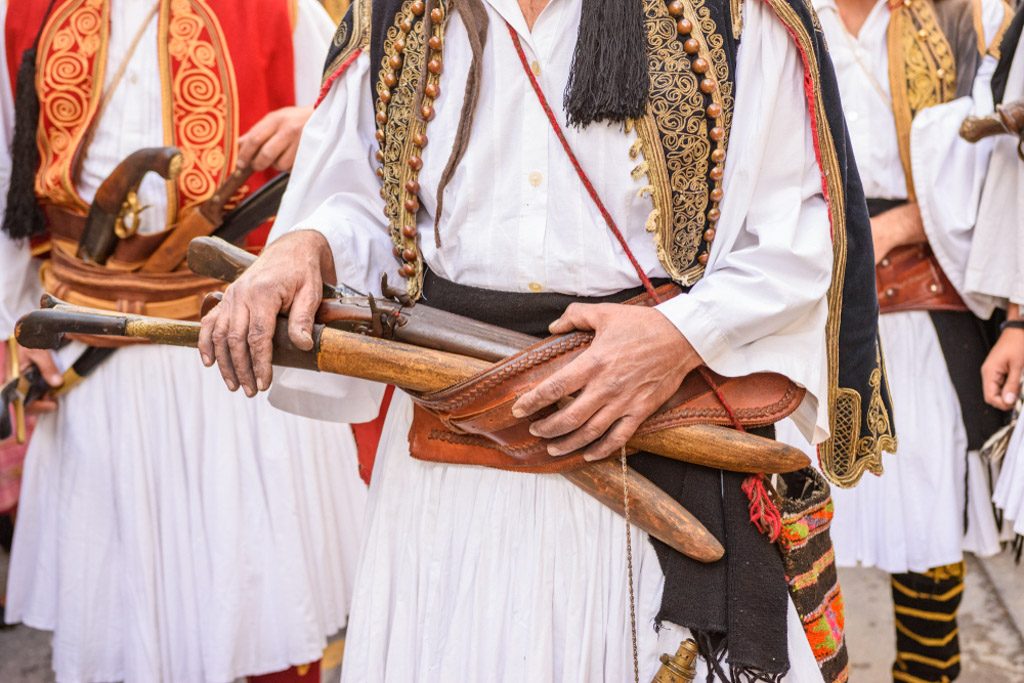 This is one of the easier traditional Greek dances to learn. Men and women join – hands on one another’s shoulders – forming a circular line. A series of lively steps – sometimes with the one leg crossing behind the other – progresses counter-clockwise for ten steps, then takes two steps back in the clockwise direction before proceeding to the next sequence. Of the Greek dances you may encounter at a gathering, this is likely the most simple – you can almost learn it on the spot.

If you are at a Greek gathering, you’ll likely be warmly encouraged to join. It is an inclusive dance, and anyone is welcome to join the circle at any time – step between any two dancers from behind and they will cheerfully separate to make room for you. You can learn this dance just by observing the steps of the other dancers. It won’t matter if you don’t know them straight away as long as you keep the rhythm and the direction of the other dancers.

This is one of the more fascinating of Greek traditional dances to watch. It is an intense dance, with the beat as the most important factor, more than specific intricate steps. The lead dancer will frequently perform spontaneous leaps and scissor-like kicks. Rather than having their hands on one another’s shoulders, the dancers grasp hands and hold them up, with their elbows at a 90 degree angle. This helps them support one another – especially the lead dancer who engages in exciting, acrobatic improvisations. 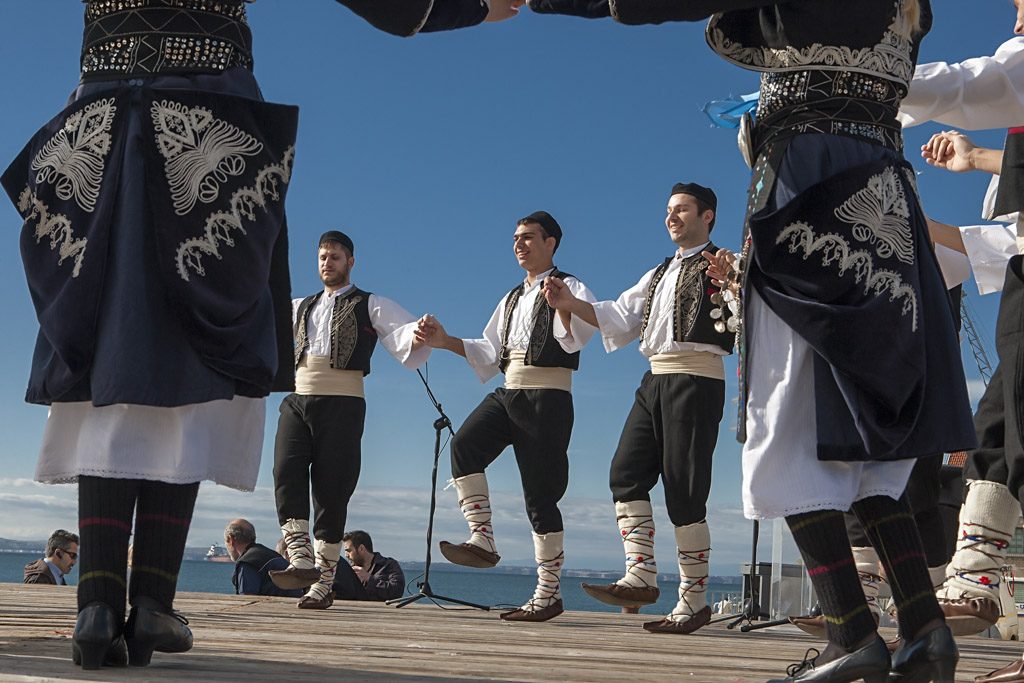 The tsamiko is named for the Chams, a people of Epirus. This dance is also called the Klephtiko, taking its name from the “Klephts” – the brigands who fought the Ottomans in the Greek War of Independence of 1821. This gives some insight into the dance’s intensity, and also into the tradition that usually this dance has been performed by men. The dancers sometimes wear the traditional “fustanella” – the costume worn by the Evzone, the ceremonial guard one sees at the tomb of the unknown soldier and the presidential mansion.

The Tsamiko is now also sometimes performed by women, and often there will be a circle of male dancers on the outside and an inner circle of female dancers.

The Tsamiko is popular throughout Epirus, Thessaly, Central Greece, and the Peloponnese.

Etymologically, this dance has perhaps the clearest and most interesting name of all the dances. Those who know some Greek will notice the beginning of the name suggests the number five – this is a dance of five steps. The word “zalos” suggests leap or step in Cretan. But it’s also a word play: “zali” is also dizziness. This is in fact a dizzyingly energetic dance. 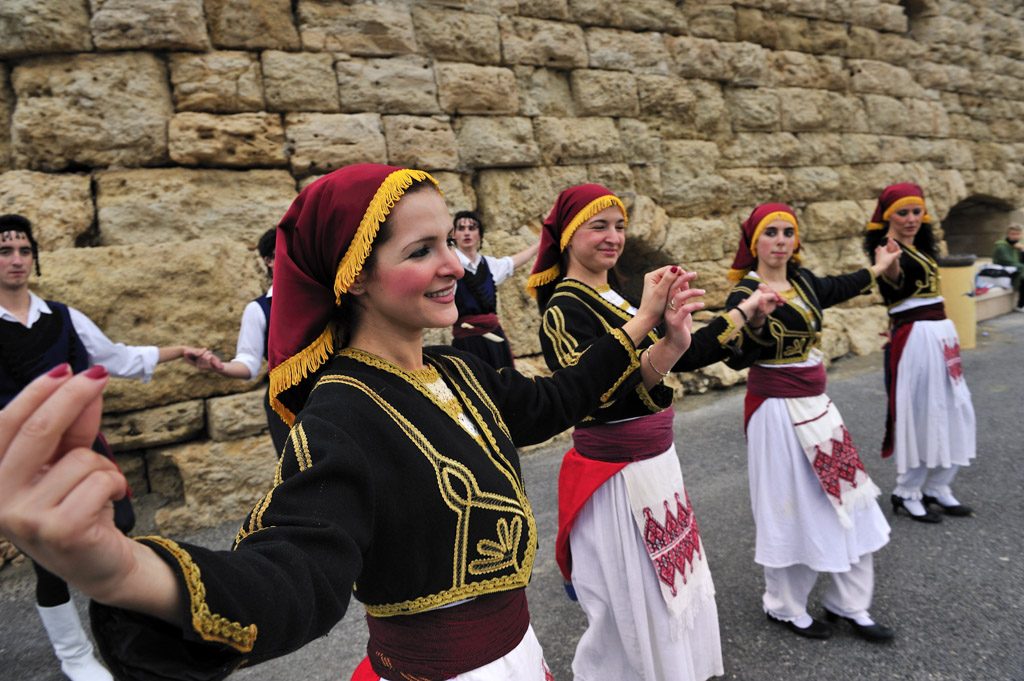 The Pentozali is the signature dance of Crete. This is a dance of warriors. The Cretans are especially heroic people, who fought bravely in many uprisings against the Ottomans. Cretan music and dance are expressions of their bold and brave nature – the tempos are fast, the music is stirring, and the dances are infused with adrenaline and excitement.

The dancers have their hands on one another’s shoulders, except for the first two- the second dancer holds the first dancer by the hand to provide support for the high leaps and kicks he performers. We say “he” because traditionally the Pentozali is danced by men. Traditional costumes for men – the “vraka” ( a type of loose breeches) facilitates athletic movements.

The lead dancer, after his improvisation, makes his way to the back of the line, so that each dancer in turn will lead the group in this ecstatic expression. Women now also perform the dance sometimes, but their traditional dress does not allow for the same range of movement. 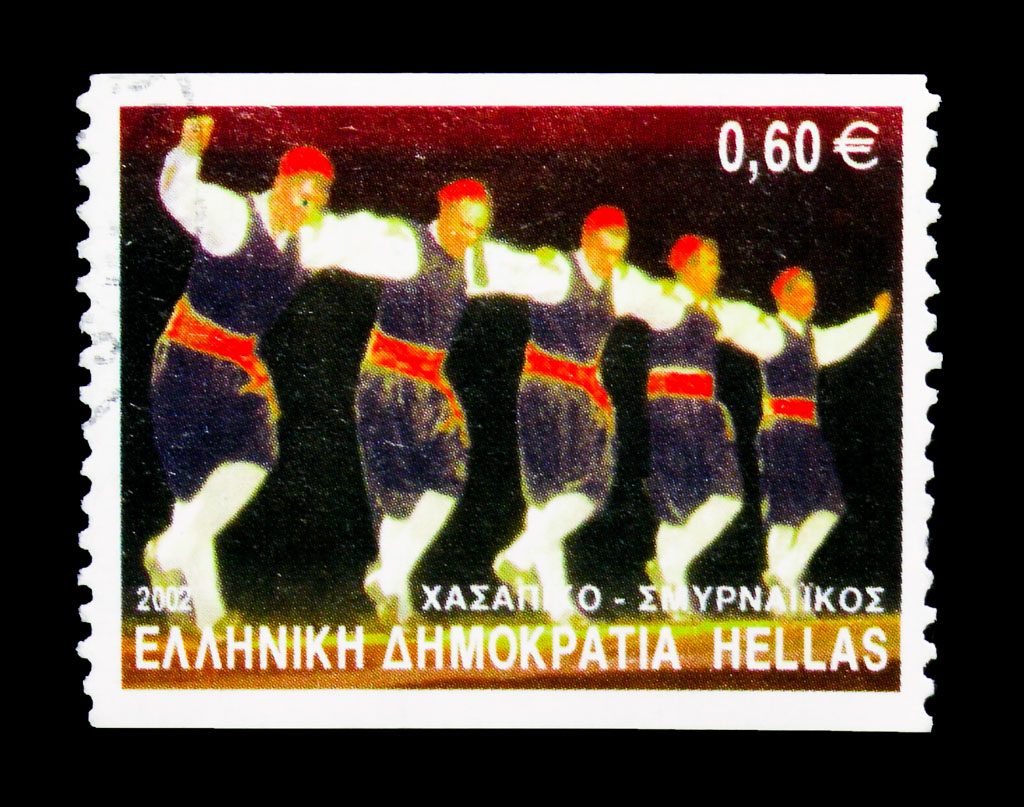 This dance has fascinating origins. Amateur etymologists will be interested to know that the name of the dance comes from the Greek word for “butcher” – “hassapis.” That’s because this originated as a ceremonial dance of the butchers’ guild of Constantinople. It was adopted from the military of the Byzantine era, and was originally performed with swords, like a symbolic battle. The dancers place their hands on one  another’s shoulders and form a line or a circle. The steps are more complex than some of the dances, and involve not only side to side motions but forward and back, and even kneeling on one knee, a kick, and a small hop. It is a complex and energetic dance, but can be performed either slow or fast.

The hassapiko is a dance primarily seen in the north of Greece and in the islands, and is associated with ports and urban settings. The traditional accompaniment is the bouzouki or the baglamas. With its military origins, the hassapiko was traditionally danced by men. Now women also dance it sometimes too.

If someone is familiar with just one Greek dance, that will be the Syrtaki. And for that, we have to thank one of the most famous Greek protagonists on the screen – Zorba the Greek. This is essentially a version of the hasapiko. The dance goes from slow with a 4/4 rhythm to quite fast (2/4) and energetic, with plenty of flair and style. The name comes from the word “syrtos” – a whole family of Greek dances. “Syrtos” in turn comes from the verb “syro” – to drag – as the head dancer in the line leads the group. 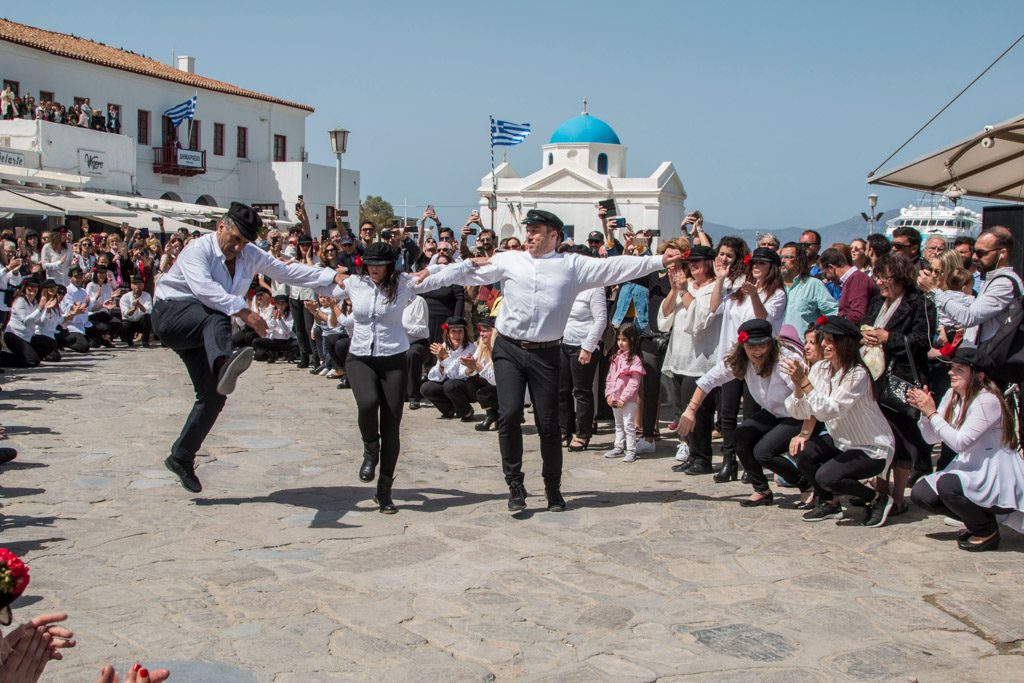 Although the most famous perhaps of the Greek dances, it is also among the more challenging to learn. But you will certainly have fun trying.