Honey is one of the most venerated food products in the world, prized since ancient times in various cultures – Greece, of course, chief among them. The role honey has played in the history and lore of mankind transcends mere sweetness and joy. Honey’s antiseptic and antibacterial properties elevated it beyond a sweetener. It was prized in the ancient world for its healing properties. In Ancient Egypt, honey was also used as an ointment for diseases of the skin and the eyes. Clay tablets from Sumeria dating even earlier – 1900 – 1250 BC – show honey as a key ingredient in prescriptions.

Honey was placed in Egyptian tombs to feed the departed in the underworld. It was an excellent choice – excavations have revealed jars of honey in perfectly edible condition. A legend also tells that Alexander the Great was preserved in honey until a suitable burial place could be found.

In ancient Greece, honey was associated with the divine. When the mother of Zeus, Rhea, hid the infant god in a cave to save him from his father Cronus, she entrusted his care to nymphs. These nymphs who nursed the infant Zeus – Ida and Adrasteia – were the daughters of Melliseus, the demi-god associated with honey and beekeeping.

The Nourishing Properties of Greek Honey

Honey is rich in bioactive compounds and antioxidants. Lowered triglycerides have also been seen in people who replace table sugar with honey. It is also useful in anti-aging remedies – a simple honey mask nourishes skin for an instant glow.

In ancient Greece, honey was treasured. In addition to being consumed on its own, it was mixed with milk to make “melicarto” for children. Honey was sometimes added to wine. Honey and vinegar was used as a remedy. 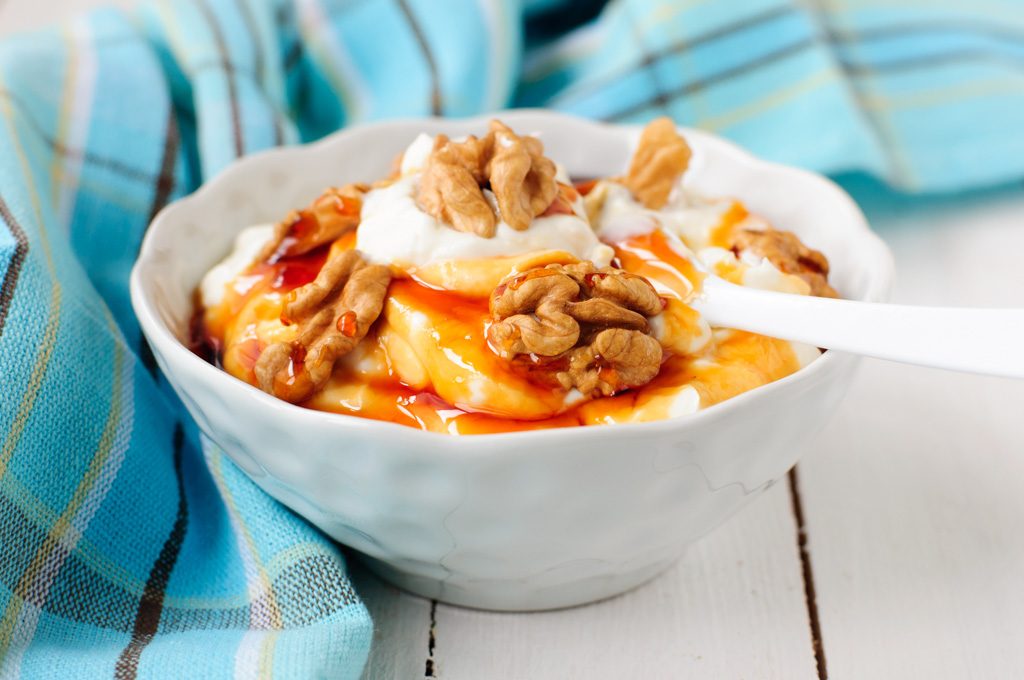 In addition to honey’s importance throughout Greek history, honey is also an extremely important part of the Greek present. It is one of the defining tastes in traditional recipes. A simple bowl of Greek yogurt with honey is a classic and timeless dessert. Honey is a key ingredient in many traditional recipes, such as Pasteli – a crisp and nutritious brittle of sesame seeds, and Melomacarona – the holiday cookie whose name translates to “honey macaroons.” Honey is essential in the syrups that sweeten a pan of Baklava and drench a batch of freshly-fried Loukoumades.

One of the most traditional and nutritious Greek breakfast treats is a slice of fresh country bread with tahini and a drizzle of local honey.

Honey is not limited to breakfast and desserts – it also plays a key role in drinks, from the currently and ever popular “Rakomelo” – honey and raki blended and drunk warm, sometimes fragranced with cloves.

Greece is synonymous with quality honey. Greece is one of the main honey producing nations in Europe, along with Spain and France. Per square kilometer, Greece is blessed with the greatest concentration of bees – about two and a half million bee colonies in Greece produce about 30,000 tons of honey annually. 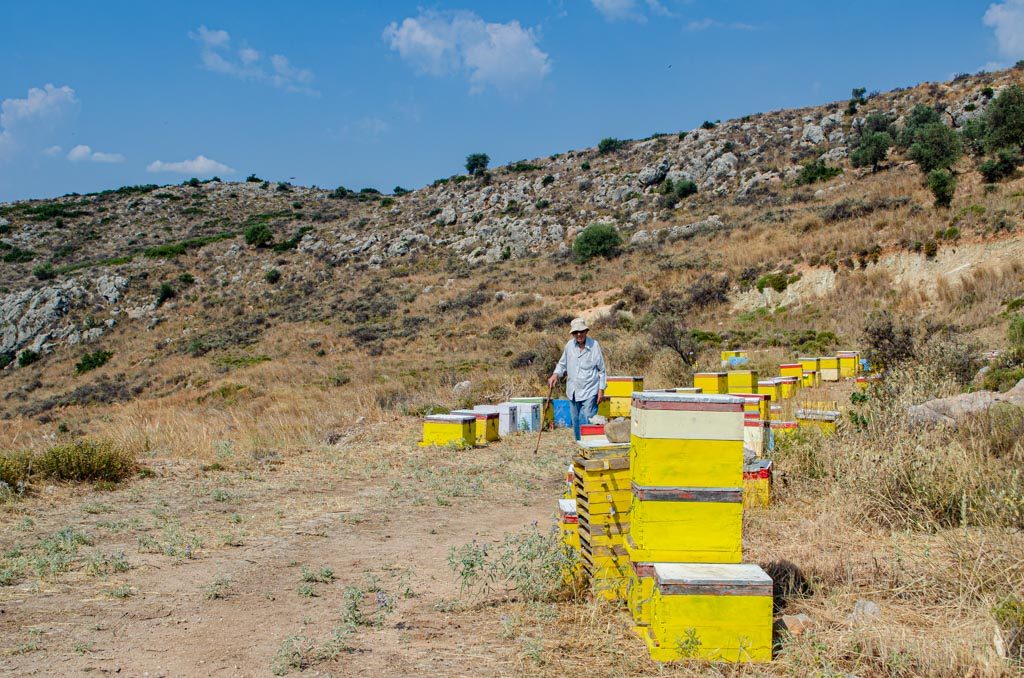 Much like the story of Greek Extra Virgin Olive Oil, Greek honey is all about quality. The reputation of Greek Honey is known throughout the world, and yet it does not represent a large export in Greece. Honey is a very often an artisanal product, from small family producers who take their bees to pristine locations in nature to gather their nectar. Good Greek Honey is very much the sweet and fragrant concentration of the landscape.

The Main Types of Greek Honey

In countries, honey is simply honey, or very often “wildflower” honey. In Greece, some honeys are blended. But most honey is sold by specific variety – the source of the nectar the bees have fed on. 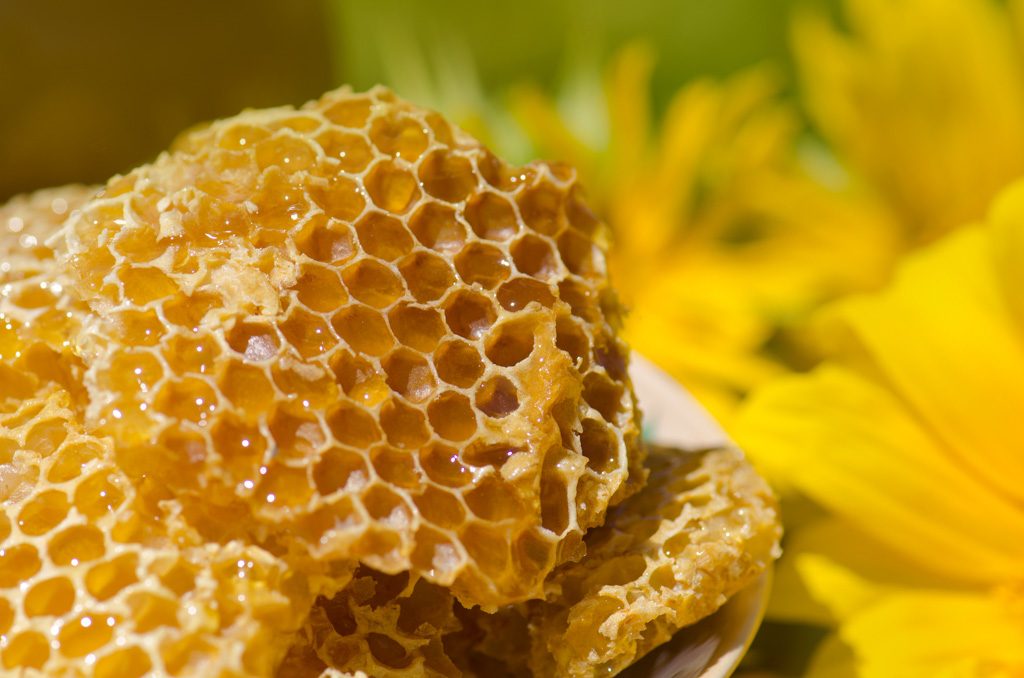 The source of the honey determines the flavor, and most people have a very strong preference. Of the many specific types of Greek Honey, here are some of the most popular:

Popular and common, the pleasing honey of flowers – orange blossoms, clover, or others – is one of the most popular honeys. It is a good choice for use in dishes, as it has a balanced aroma that is harmonious with other ingredients.

Although technically also a flower honey – the bees have gathered their nectar from the blossoms of the thyme plant – this delicious honey is in a category of its own. The honey has the distinctive aroma of the summer breezes of Crete – where it is one of the most popular varieties of honey.

This is one of Greece’s most prevalent honeys, and also a honey characteristic to Greece. Its natural glucose content is fairly low, resulting in a not overly-sweet flavor, and also in delayed crystallization. Pine honey often has a deep hue, and it retains the refreshing scent of the forest. This is a wonderful taste of Greece.

From the flowering chestnut tree comes a honey of unusually strong character. Chestnut honey is deeply aromatic with the unmistakable deep taste of chestnut. A little of this unusually intense honey goes a long way. Its rich character makes it an excellent pairing with cheeses – it can stand up to boldness.

Throughout Greece you will see the lovely sight of colorful hives in fields and beside rural roads. There are many, many independent beekeepers working in Greece – some do it as a hobby or on the side, with just a few hives. Don’t miss the opportunity to buy directly from them – on smaller islands, one will often see roadside stands where the beekeepers themselves sell their product. 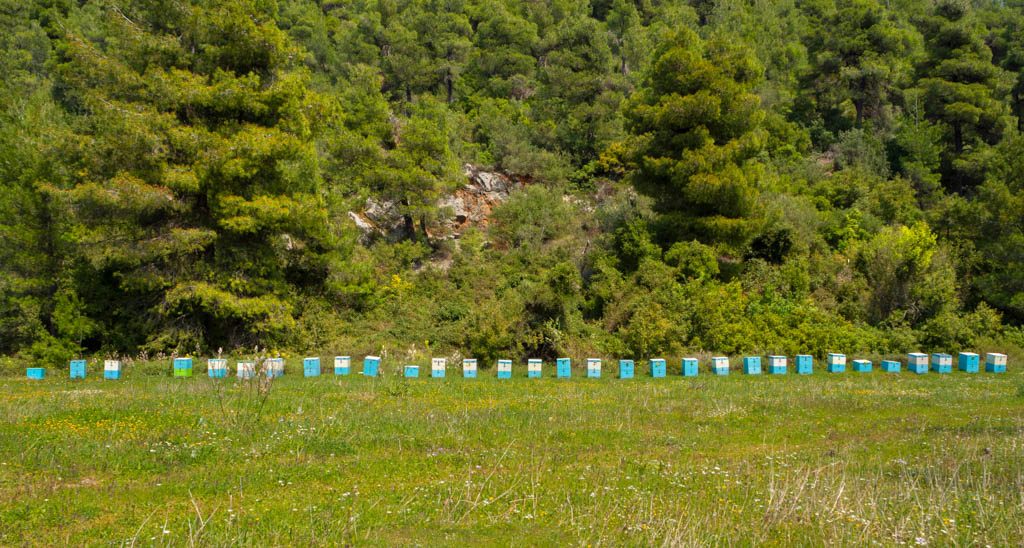 Here are some particularly interesting regions for Greek Honey: 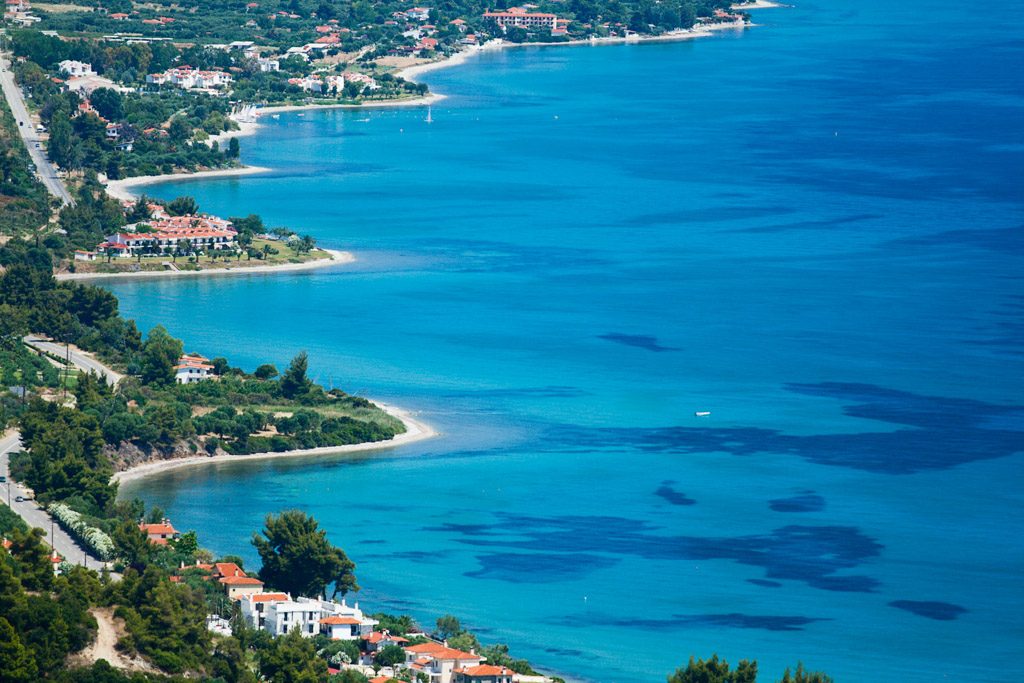 With a strong tradition in Pine honey, lush and green Halkidiki is an interesting honey region. In addition to the “legs” of Halkidiki, the peninsula also has a mountainous region in the interior, rich with hives. A jar of pine honey is an excellent souvenir of Halkidiki, and you may get a chance to try ice cream with honey and walnuts – a local delight. 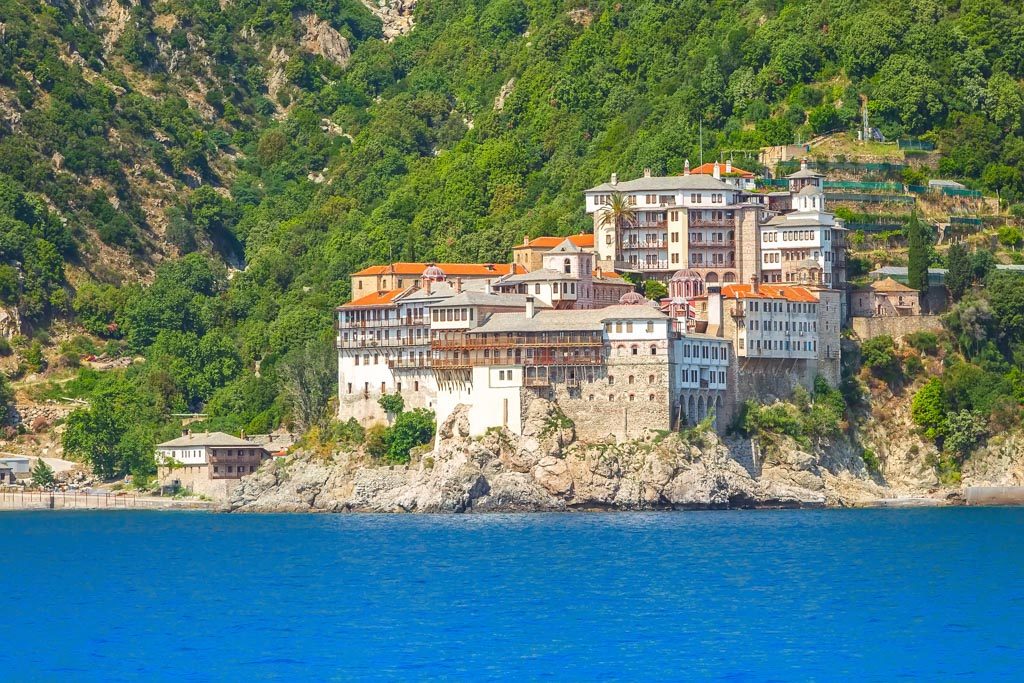 Mount Athos – the third leg of Halkidiki that is a famous monastic community – specializes in the production of Chestnut honey also. 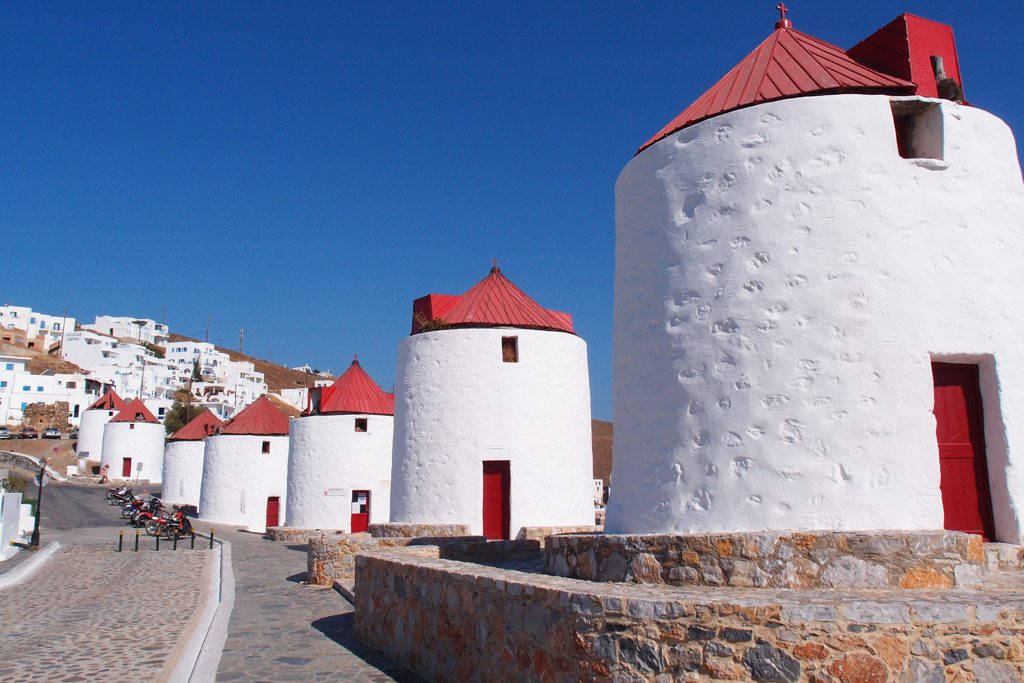 Nearly 50 beekeepers on the island of Astypalaia of the Dodecanese keep an ancient tradition of apiculture alive. Thyme honey is a specialty of the island. Honey features in many of Astypalaia’s traditional sweets, such as loukoumades, halva with honey, pasteli with honey, and xerotigana – pancakes drizzled with local honey. 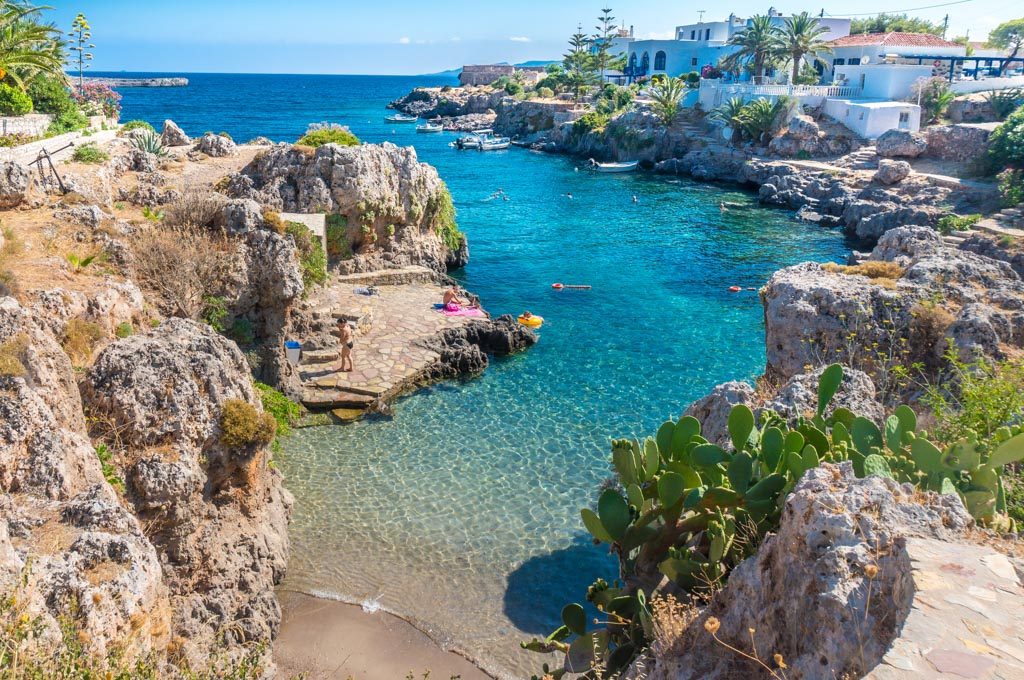 This paradise of an island off the southern tip of the Peloponnese is famous for its thyme honey. This unspoiled island generally has high quality natural products, and the thyme honey of Kythira ranks among the best honeys of Greece. Its premium price is worth it, for its exceptional aroma – good enough, apparently, for a Czar – it was the preferred honey of Tsar Alexis of Russia.

Have you tried any of the famous honeys of Greece?