The brilliant light of Greece is famous the world over. Seeing the great ancient monuments bathed in sweet bright light, it seems almost as though the country has a special relationship with the sun. Some places in Greece – Rhodes for example – are basking in the sunlight 300 days per year. And Athens is one of Europe’s sunniest capitals.

The Sun and the Sun God – Helios

The word Helios is still in use today. Helios, for the ancient Greeks, was the deity who embodies the sun. The sun god Helios was a descendent of the Titans – a grandson of Gaea (the earth) and Uranus (the heavens), and the son of Hyperion and Theia. Eos (the dawn), and Selene (the moon) were his sisters. 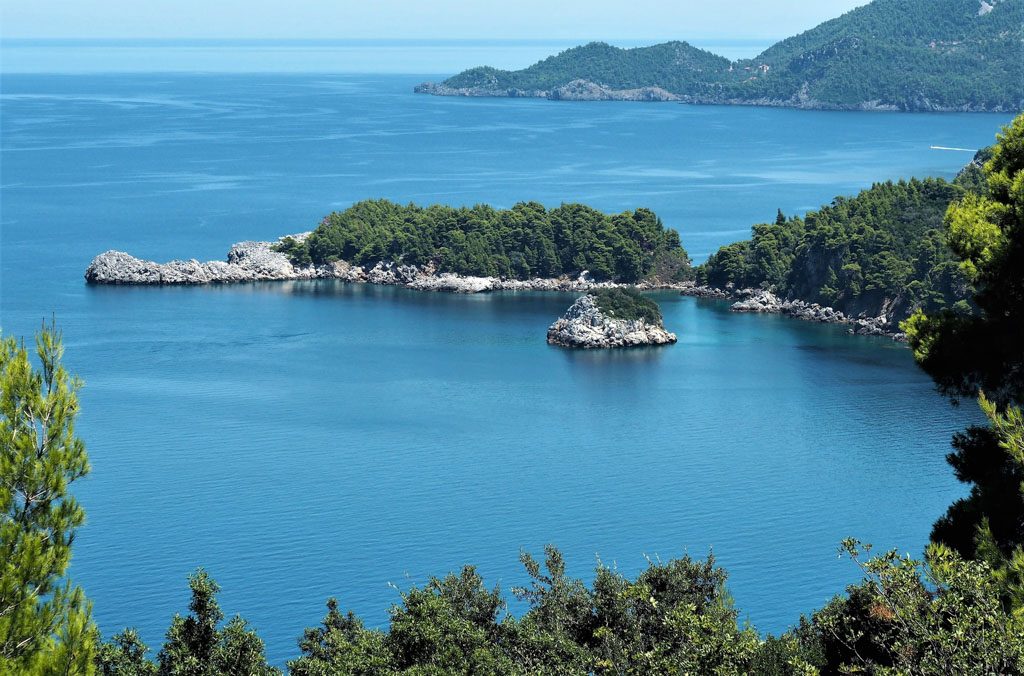 Helios is depicted as a handsome young man in a radiant crown – sometimes spears of light radiating from his head. As his sister Selene drives a chariot across the sky with the moon, he also drives a chariot. Helios’ chariot is gold, and pulled by four great horses. The names of most of the horses were related to fire: Pyrois – Fiery One, Aethon – Blazing, Phlegon – Burning, and Aeos – Turning in the Sky.

Helios and Apollo came to be associated with each other, and therefore also with Asclepius, the healing god. Helios was particularly revered in Rhodes, and the Colossus of Rhodes was dedicated to him. Helios was important to the Dorians, and it may have been they who brought his cult to Rhodes. 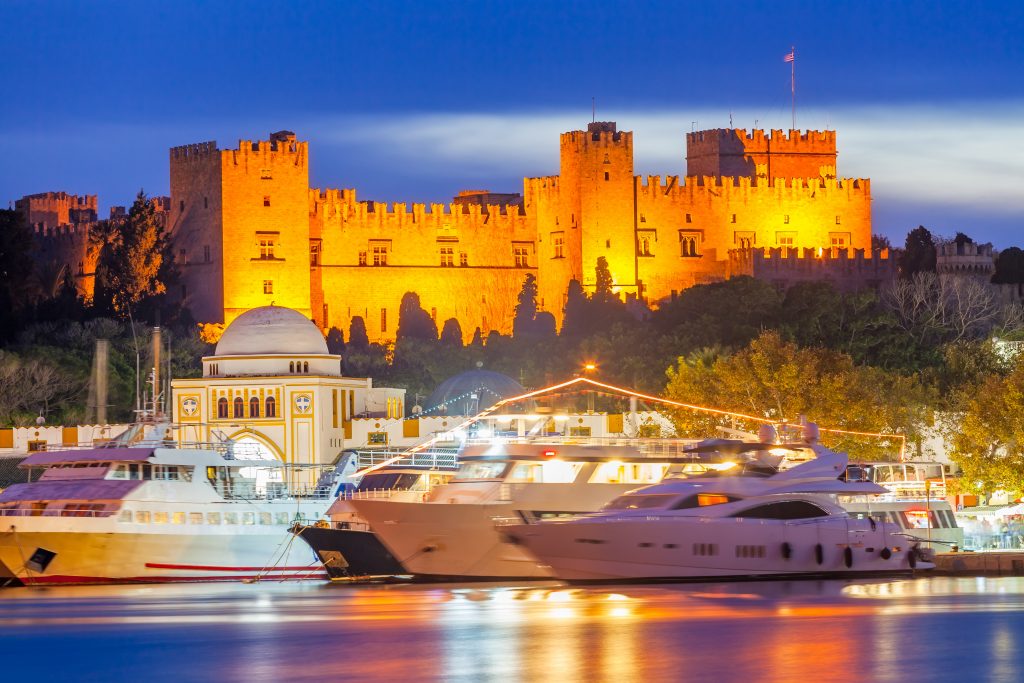 There was also a cult of Helios at the acropolis of Corinth, and scattered worshipping of Helios around the Peloponnese – at Laconia, Argos, Ermioni, and Epidaurus, among other sites. The word Helios has Proto-Indo-European origins. In latin, he became Roman sun god Sol, also Sol Invictus – the invincible sun. 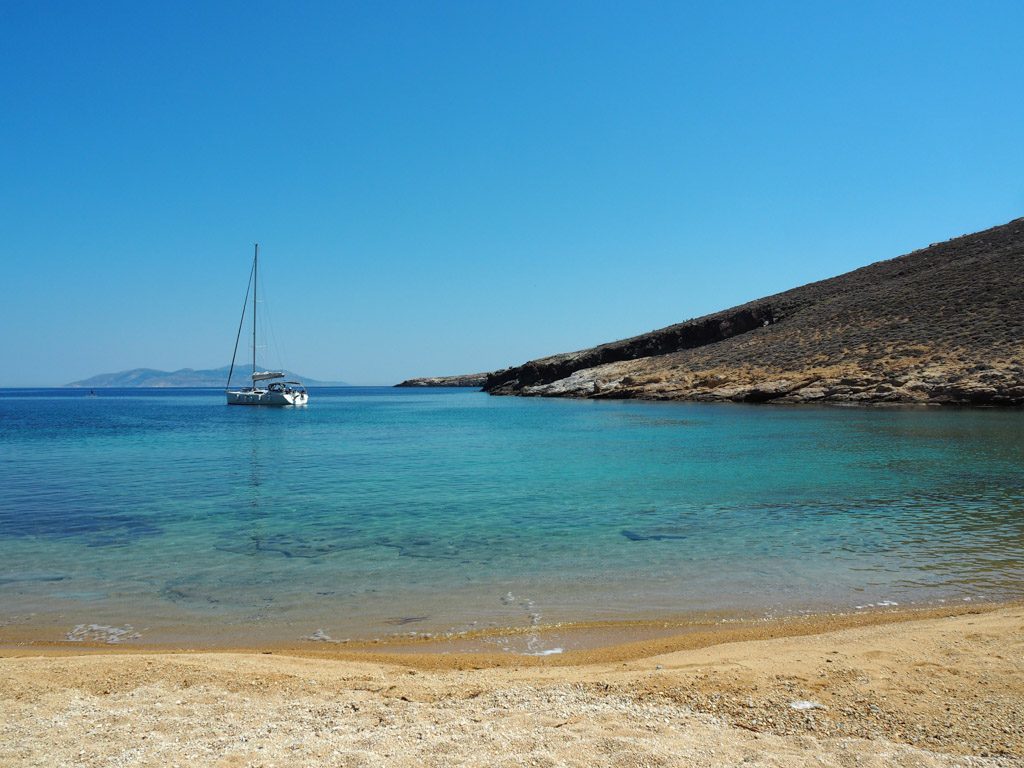 The sun has been an object of veneration, celebration, and myth since the age of ancient Greece, vestiges of which we still see today. In summer, Greece is blessed with hours and hours of sun. So the summer solstice – the longest day of the year – often passes without special notice (the summer celestial festivities in Greece focus rather on the moon).

In ancient Athens, there was the Skirophoria, a sober procession on the 12th of the month Skirophoria (June/July). A priestess of Athena and priests of Apollo and Poseidon walked from the Acropolis to Skiron, near Eleusis. They walked under white umbrellas, signifying the protection of the soil against the rays of the summer sun.

The winter solstice was another matter though, greeted with great festivity.

There was association of the sun with fertility and the awakening of the earth. Festivities in the winter month, dedicated to Poseidon, celebrated the return of longer days. One such festivity was the Haloea, celebrated chiefly at Eleusis. The Haloea was a harvest festival, and more specifically likely a threshing festival, as the grain was separated from the straw, honoring Demeter, Dionysus, and Poseidon. This was chiefly a women’s festival, overseen by a priestess with wine, food, and phallic-shaped cakes. The Haloea had a bawdy edge, and the women celebrated alone so that they might speak and jest freely.

The modern Greeks and their visitors no longer have any religious rituals related to the sun. But that does not mean that the sun is not revered and celebrated. And even ritually – a well-lived Greek life, for locals and visitors – takes the sun into account. Rising for the sun is a pleasure but admittedly few will set their alarms in time. The sunset, on the other hand, is a special moment in the Greek day. 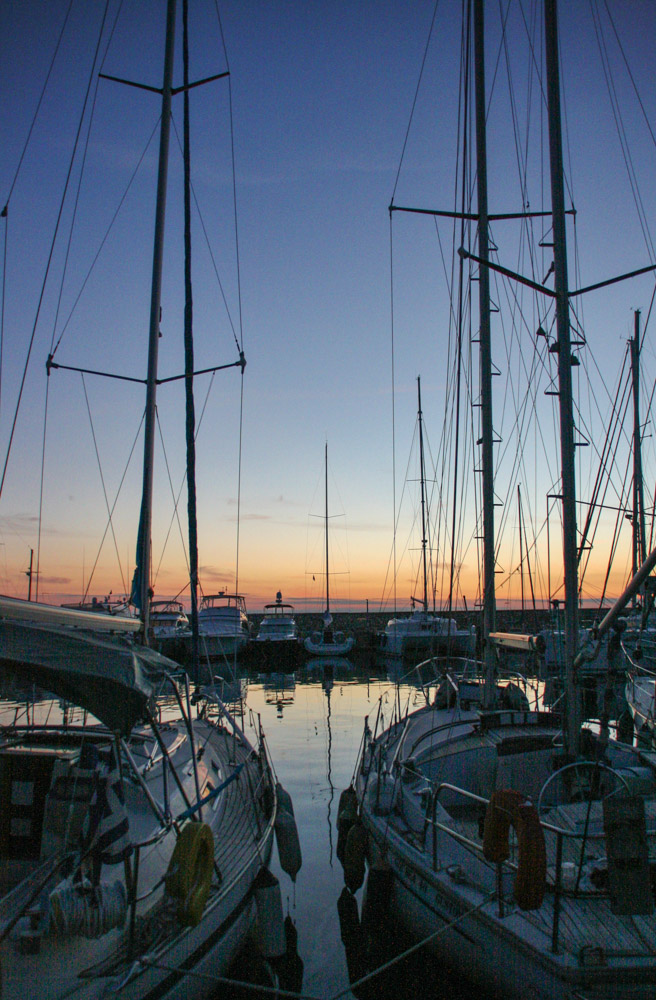 Here are some of our favorite places to enjoy a Greek sunset: 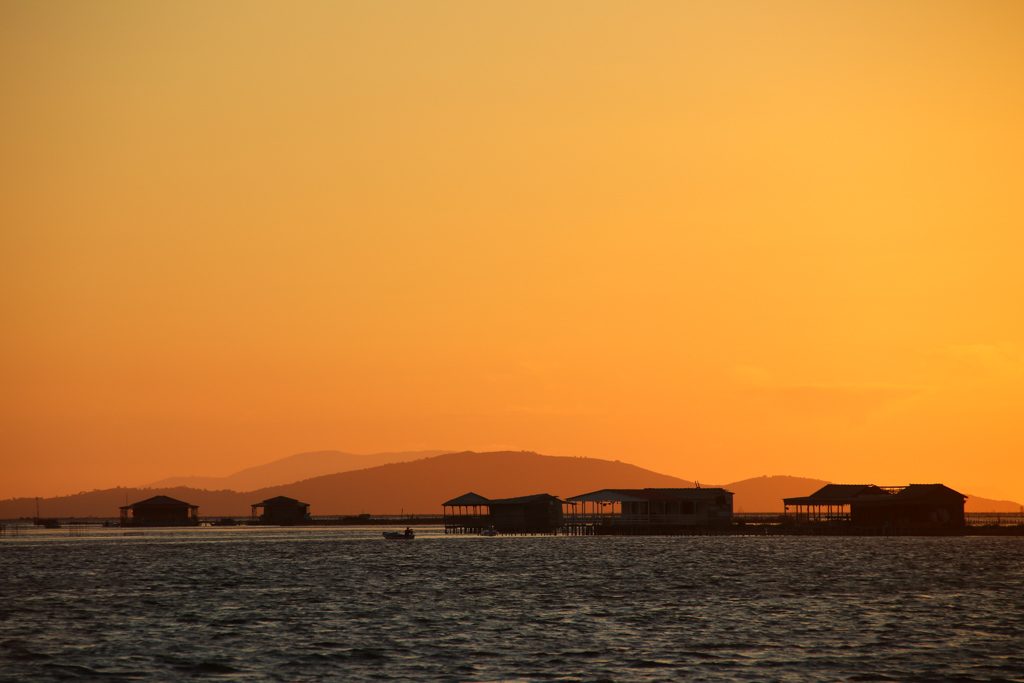 Few places have as strong a claim on the modern Greek soul as Messolonghi – called Hiera Polis (sacred city) for its bravery and sacrifices in the Greek War of Independence. The topography of Messolonghi is special, in addition to a port on the gulf of Patras, it has the great Messolonghi-Etoliko Lagoon. This magnificent wetland offers an endless reflection for the changing light in the sky to make  one of the loveliest sunsets of Greece.

Between her famous neighbors Paros, Naxos and Santorini is the lovely Cycladic island of Ios. The island has a magnificent topography. Hilly Ios has great cliffs descending into the sea. The endless unobstructed views of the Aegean and the surrounding Cyclades make for an unforgettable sunset. 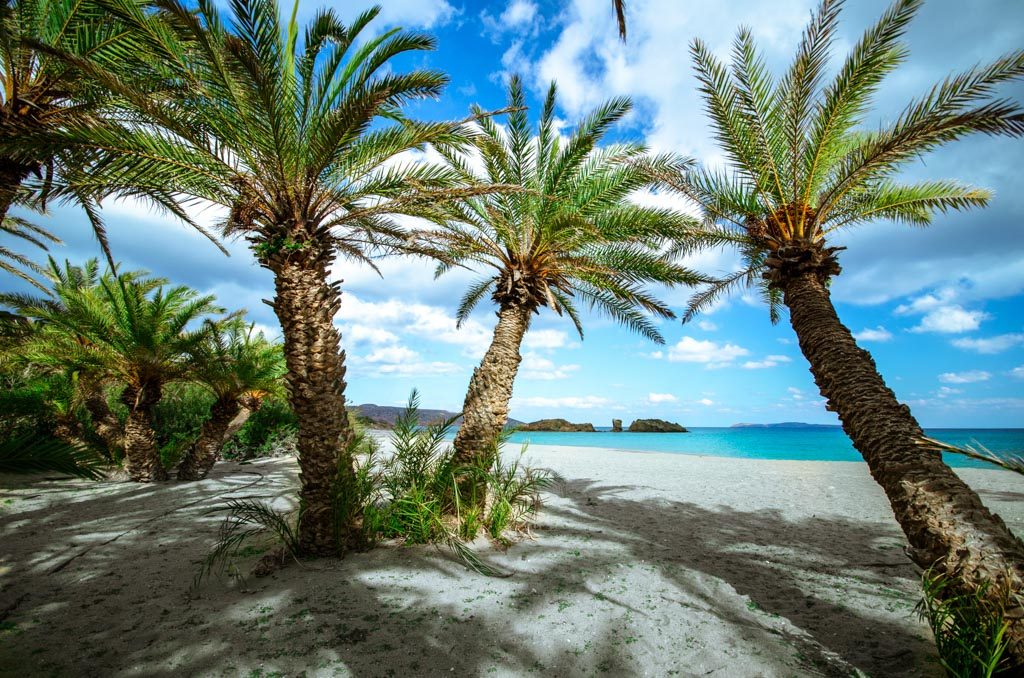 This wonderful island is the largest of the Greek islands, large enough to have a variety of moods and characters. Eastern Crete is the much quieter side of the island. There are far fewer tourists here, and much more untamed and beautiful nature – including the vast Sitia Geopark. Go to a famous beach, like Vai – the largest palm forest in Europe. Or strike out on your own to find a deserted beach – this wild part of the island rewards explorers – for a private sunset experience.

Ilia – or Elis – is a region of the eastern Peloponnese and facing the Ionian Sea and the Gulf of Patras. You can visit Ancient Olympia, then find your perfect beach – there is a choice of sandy beaches and lagoons – the Kaiafas Lagoon to the south and the Katochi Lagoon on the northwest coast, where you’ll also find the capes Akrotiri Katakolon and Kyllini. This is a beautiful place to enjoy the Greek sunset in tranquility and style. 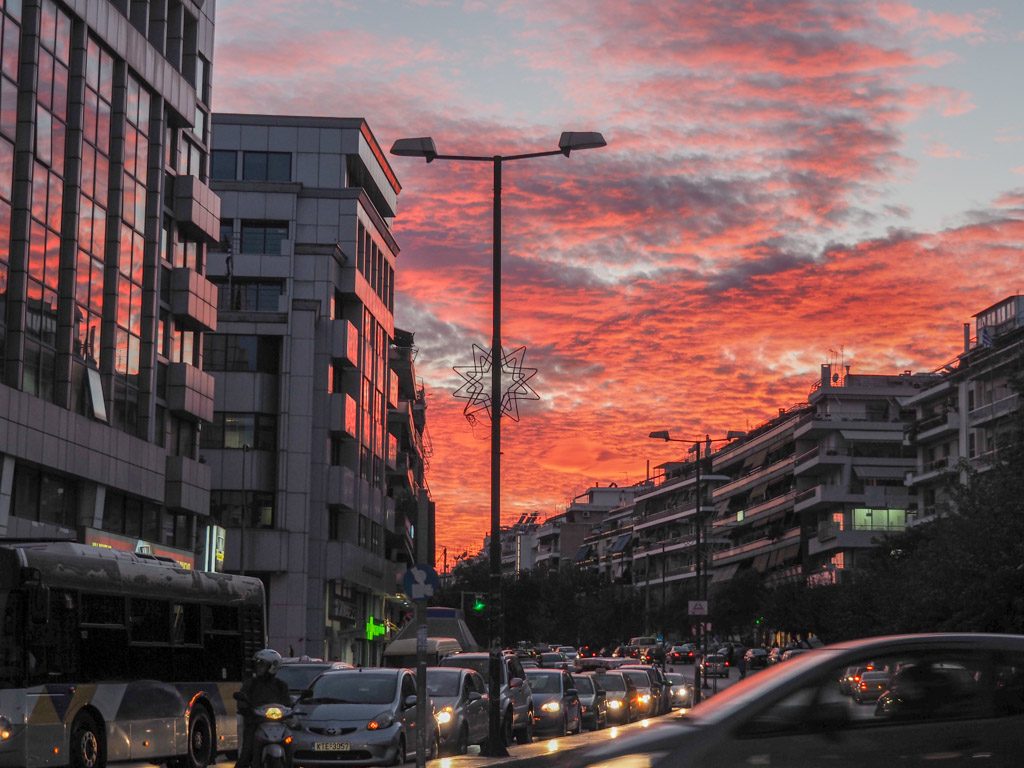 The sun-drenched capital is a wonderful place to see the sunset. For one of the loveliest urban sunsets in Europe, go to the top of Lycabettus hill, 300 meters above sea level. From here, a 360 degree view of Athens stretches before you. If you come early enough, you’ll see soldiers taking down the Greek flag at sunset in front of the small chapel at the summit. If you linger a little longer after the sunset, you can see the lights of the Parthenon go on – a magical sight. In the distance is the busy port port of Piraeus. 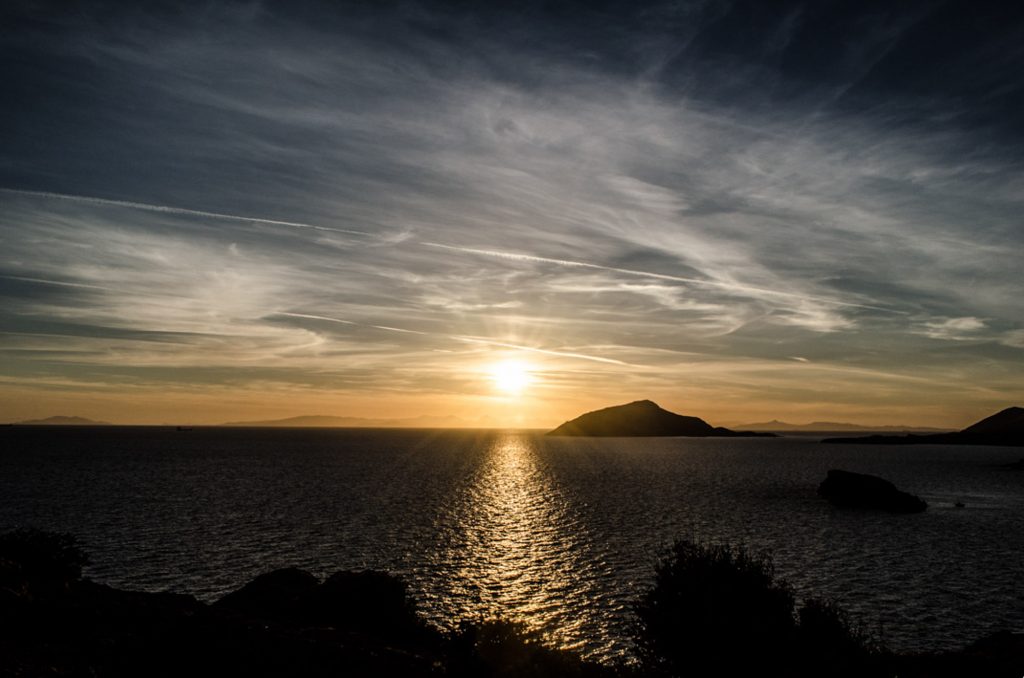 For one of the most legendary sunsets of Greece, you need to take a short and beautiful trip along the Athens Riviera to Sounio. Here you’ll find the famous 5th century (444 – 440 BC) Doric temple of Poseidon, erected to the god of the sea in thanks for guiding ships around the cape and safely back to port. The temple is 60 meters above the shimmering sea. When it catches the last rays of the sun it’s a sight to behold. The sunset over the Aegean here is so majestic that visitors sometimes breakout into spontaneous applause.

Have you been to any of these glorious places in Greece? If not let us plan your perfect escape so that you can witness the Greek sun, firsthand.