Greece is a land that boasts millennia of seafaring mastery, over 6,000 islands, and many seas. This is a land that has a name for every wind, and stories and lore to go with them. In Greece, mythology, history, and identity are inextricably bound up with her endless seas.

Keeping centuries of seafarers safe, guiding their paths, and unushering them back to harbor and home are the glorious lighthouses of Greece.

What better way to explore Greece’s eternal connection with the sea than to visit some of the gorgeous beacons of safety and welcome?

Visiting some of Greece’s most historic lighthouses will also introduce you to dramatic scenic locations. 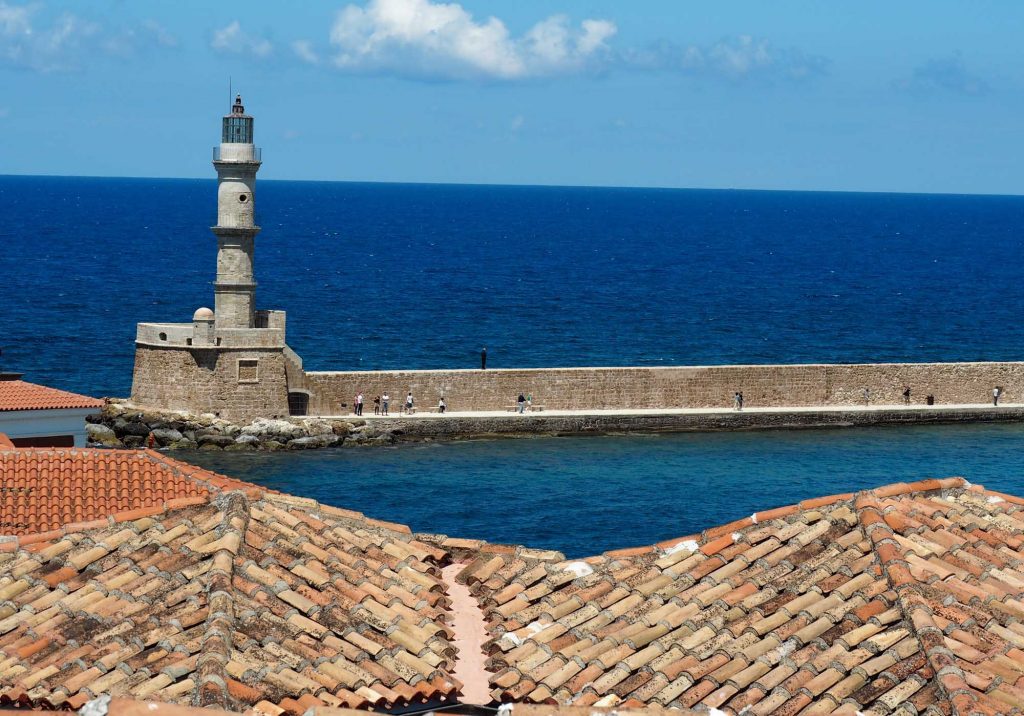 On the third full weekend of the month of August, over 500 lighthouses and lightships in over 40 countries participate in a great tradition. Lighthouses keepers open lighthouses, lightstations, and visitors’ centers to the public, to share maritime history and heritage and to enhance the public’s knowledge.

International Lighthouse Day reflects the spirit of international cooperation and friendship of seafaring, a spirit that is so much a part of Greece.

Many Greek lighthouses participate in this international custom. Here are some worthy of a visit at any time of the year: 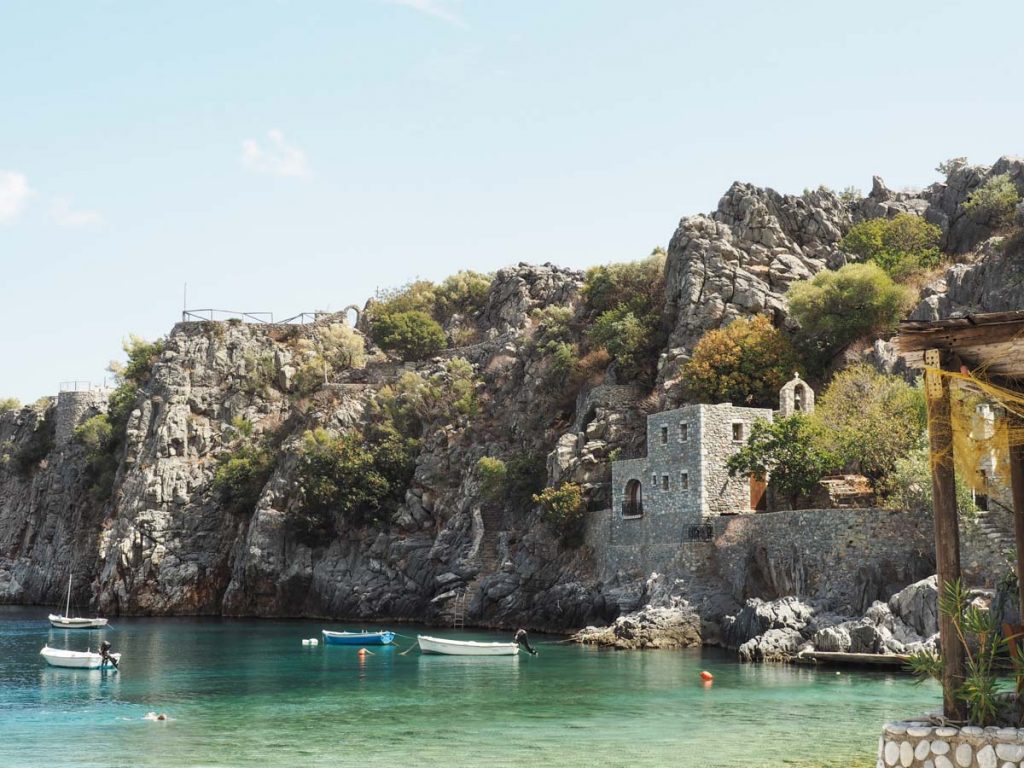 Cape Tainaron, of the rugged and glorious Mani Peninsula at the southern tip of the Peloponnese, has played an important role in Greek history and culture.

Also called Cape Matapan, this is the southernmost point of Greece’s mainland (and the second most southern point of Europe, behind Punto de Tarifa in Andalusia). In the ancient world, this was considered one of the gates to Hades. It was here in the cave of Hades that Orpheus descended to try and bring back Euridyce, and where Hercules descended in order to fulfil one of his 12 labors- to retrieve Cerberus.

This dramatic location was of spiritual significance to the Spartans, who built several temples here, the finest to Poseidon. 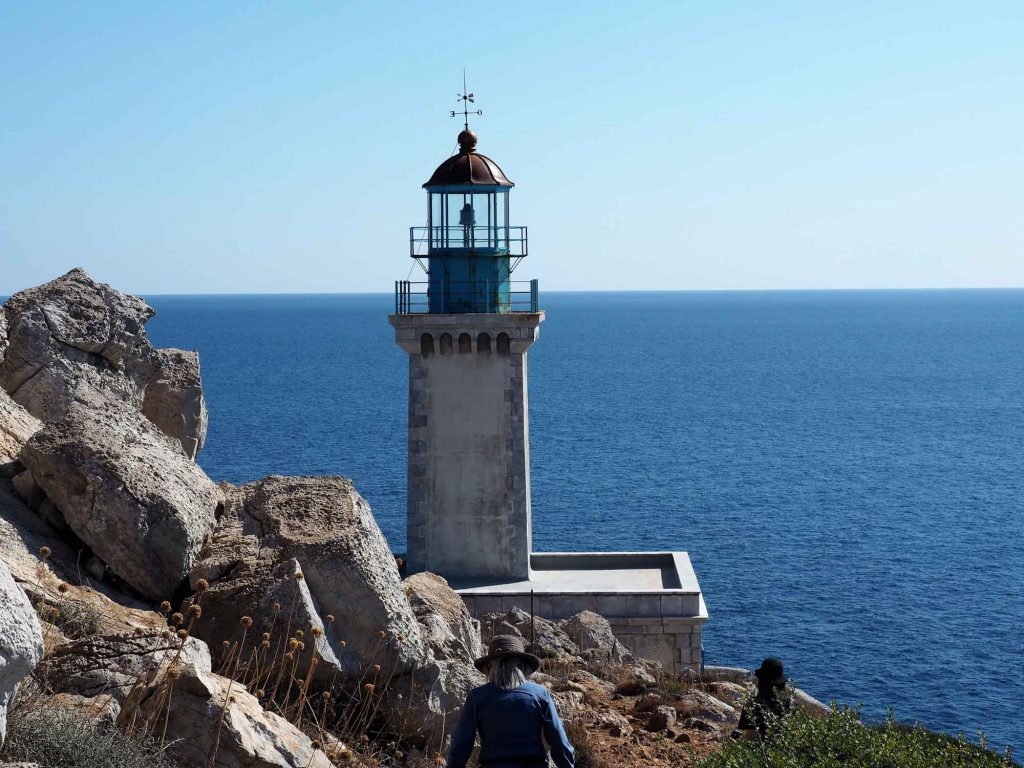 A more contemporary response to the power of Poseidon and the sea is Cape Tainaron’s late 19 century lighthouse. The walk to the lighthouse- a little less than an hour- is one of Greece’s loveliest hikes, combining natural splendor with unparalleled views of the Bay of Laconia and the regal Mani Peninsula. The Lighthouse of Cape Tainaron, at 16 meters in height, has served as a beacon to passing ships along this busy Mediterranean route since 1882.

While here, take in Greece at its most noble, in the uncompromising beauty of Mani in both its nature and its vernacular architecture, the famously brave character of the Maniots – descendants of the Dorians and the Spartans.

Mani is a quality destination, combining nature, culture, and cuisine. The food is elemental and delicious, with the finest quality of local cheeses made in small artisanal batches, smoked seasoned meats like “Siglino”, and delicious local wines, to say nothing of pure seas teaming with fish.

Do you love that famously stark beauty of the Cyclades, but want a more peaceful, private experience? Each island of the Cyclades has its own personality. The Cyclades are sometimes at their best when they are at their most natural and wild, and Serifos is  the perfect example. 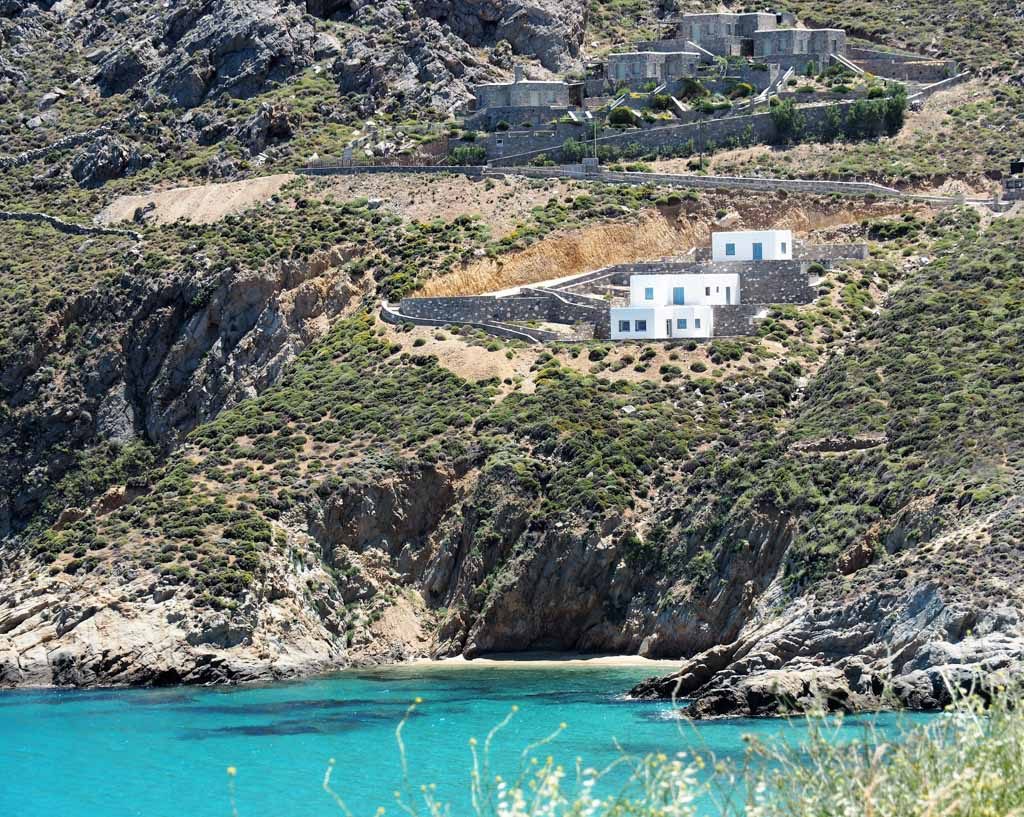 The classic architectural tradition of the Cyclades- those dazzlingly white houses with their blue shutters – give the island its simple elegance and authentic purity. The capital, Chora, is one of the loveliest of the whole Cyclades, known for its traces of medieval architectural heritage, seen in the romance of stone arches along narrow cobblestone alleys.

There is plenty of history here. From the 15th-century Venetian castle, above Ano Chora, you can take in the stunning sweep of the Aegean and the surrounding islands. There was a Venetian presence here beginning in the early 13th century.

This has been a quiet island for much of its history, with the exception of economic growth in the 19th century. Serifos was found to be rich in iron ore. The mines have since closed, and now the inhabitants of this peaceful island enjoy fishing and tying their farms, and welcoming summer visitors who appreciate its authentic charms. The island is just a short ferry ride from Athens – 2 and a half hours with a high-speed craft – making it ideal for a quick get-away.

Nature lovers will enjoy hiking and mountain biking, as well as exploring the large selections of spectacular beaches, which include Livadakia and Alvomonas. 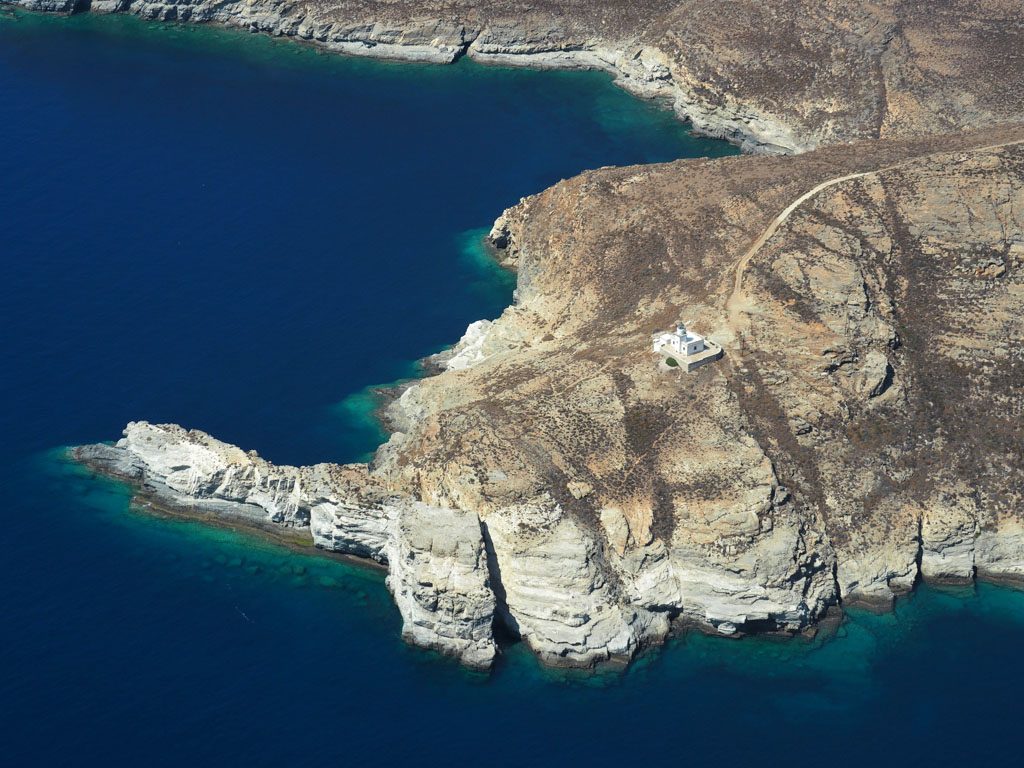 The lighthouse of Serifos is at the dramatic and towering cape of Spathi (“sword” in Greek), 65 meters above the sea. Built in 1901, the lighthouse retains its beautiful original architectural detail. A cobblestone path descends to the sea; the original lighthouse keepers arrived here by boat.

The Lighthouse of Poros

Poros – a lush green gem of the Saronic Gulf – has inspired artists, poets, and writers. So very close to Athens – less than 60 km from the port of Piraeus – and so lovely, it’s natural that Poros would have an impressive, but discrete – cultural pedigree. The British painter John Craxton, the Greek poet George Seferis, and the American writer Henry Miller among them. 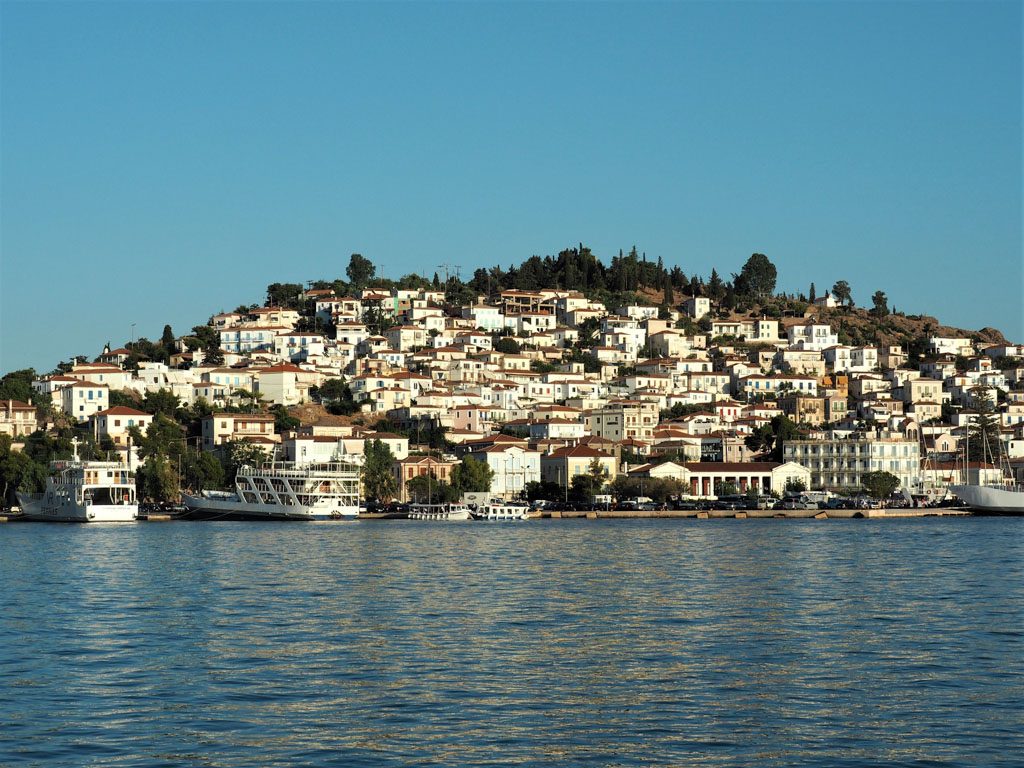 What they loved about Poros is what makes it such a compelling destination still. The island is famously green, and the landscape is marvelous. But the real draw here is the island’s authentic character. The narrow and picturesque alleys are fragrant with jasmine and bold splashes of bougainvillea. A clock tower tops the charming port town, and a walk up to it affords charming views. Examples of neo-classical architecture – the island even has a building by noted neoclassicist architect Ernst Ziller – give the island a note of elegance, without undermining it’s modest and relaxed character. The islet of Bourtzi, with its early 19th century castle overlooking the port, adds another elegant note.

The “Lemonodassos” – forest of lemon trees – is full of water and old water mills. The shady island is also covered with pine trees, plane trees, and thick oleander. 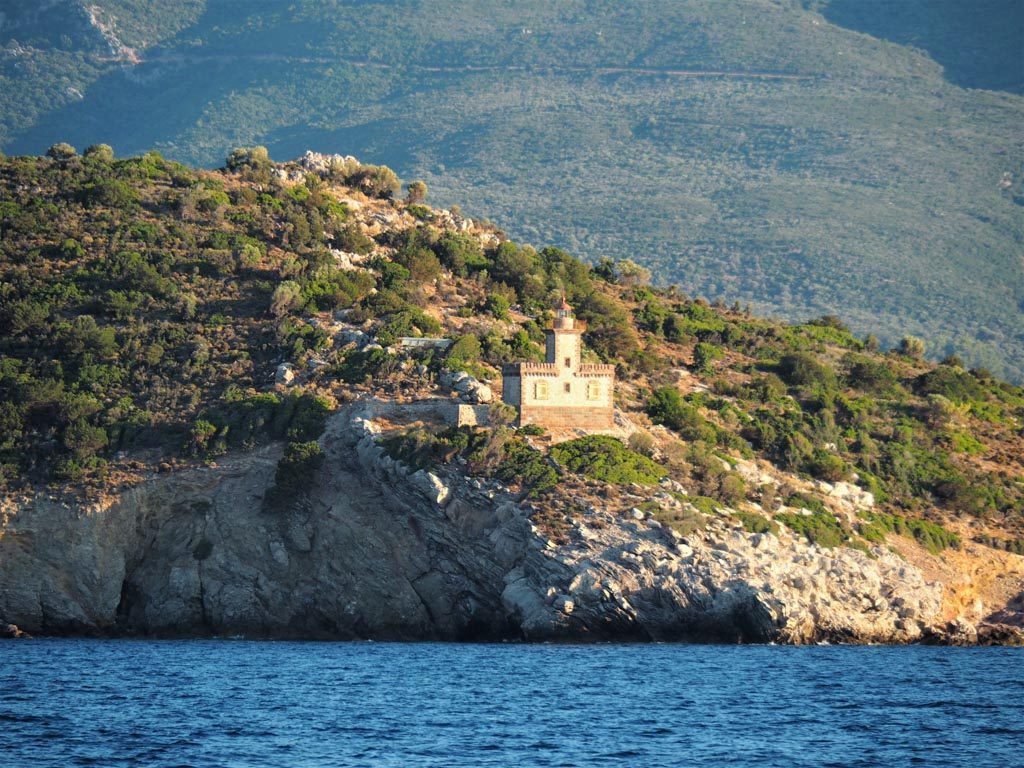 Of course, Poros has a lovely lighthouse. In keeping with the charming and authentic character of the island, this stone lighthouse is unusually lovely. Built in 1870, the Dana lighthouse looks more like a small castle-  a crenellated fairy-tale building with a lighthouse tower rising from its upper story.

Visiting one of Greece’s historic and beautiful lighthouses can introduce you to some special destinations of unique and authentic character. Have you visited any lighthouses in Greece?