One of the greatest glories of Greece is the wealth of beautiful Orthodox churches of every description. Not only do they fill the cities and villages, but you will find them in the most rugged and remote locations all throughout the mainland of the country and the islands. On the highest peaks and in the most remote wind-swept coves, you will find an Orthodox church.

Orthodox churches are named for saints and prophets, and very often, which saint or prophet a church is named for is linked to the location of the church. This is especially true for mountains and the sea.

Many churches in Greece have the name Profiti Elias. This is the prophet Elijah, often associated with mountains. He was said to have lived in a mountain grotto. Eliah was the prophet who challenged the prophets of Baal to see which deity was sovereign in the Kingdom of Israel – the God of the Israelites or the pagan gods. The challenge was which god could light a sacrifice aflame high on Mt. Carmel. The prophets of Baal failed; the God of Elijah succeeded (to make the contest fair, Elias soaked his altar in water first). The name for Mt. Carmel in Arabic is in fact Jabal Mar Elyas – Mountain of Elias/Elijah. Elias also appears in the bible in the Transfiguration – again at a mountain top. 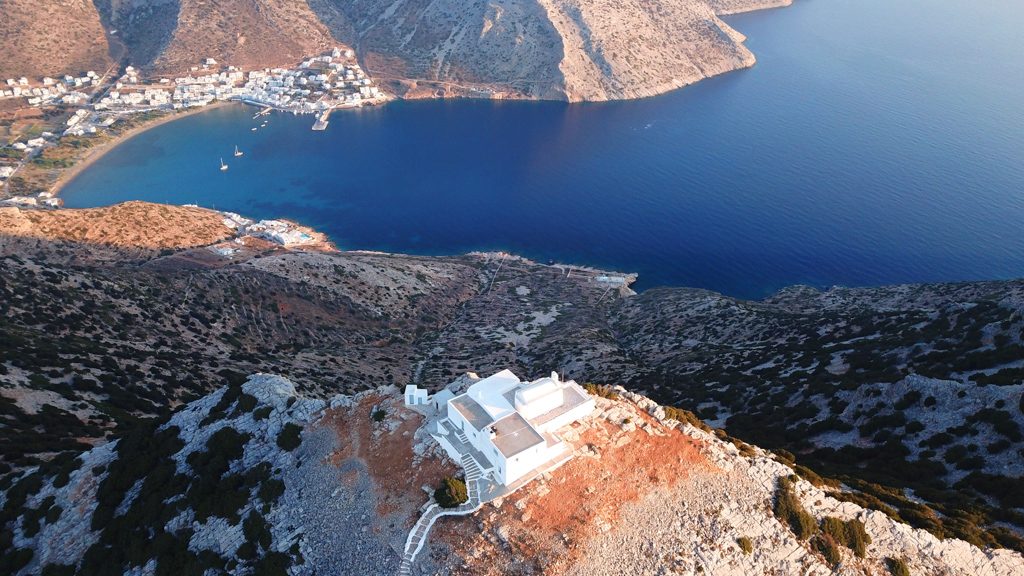 One of the more rugged and elemental islands in the Cyclades, Sifnos is blessed with an unusual purity. The island is mountainous, and this lovely chapel of the mid-17th century crowns its highest point. It is a commitment to scale the path ascending to it. Sifnos is famous for its excellent hiking trails. Of the finest is the Prophiti Elias trail, which begins from the village of Appolonia and ascends about 450 meters in altitude over a course of close to 6.5 kilometers. The rewards, of course, are twofold – a wonderful church and stunning views.

Tinos is most famous for the  Church of the Panagia Evangelistria – which draws many thousands of Pilgrims from all over Greece on the day of the Assumption of the Virgin, August 15th. But this is not the only church worth visiting on Tinos. Parts of the pristine Cycladic island of Tinos are almost lunar in their wonderful rock formations, and – like Sifnos – Tinos has many excellent paths. One of these is a segment of the E3, leading to the church of Profiti Elias, just over a kilometer from the village of Marlas. Terraces overlooking the endless Aegean are next to the church – sunset is of course stunning from here.

Splendid and fabled Mani – this beautiful area of the Peloponnese is full of charm and beauty, both natural and historic. It was from the village of Aeropolis – meaning the village of Ares – that the Greek War of Independence began. Above the town and high on a peak is Profiti Elia, commanding a grand view of the southern Peloponnese. It is reachable by car, albeit along a narrow and demanding road.

No part of Greece is better known for its splendid mountains than dramatic Epirus. So naturally, one would expect to find here the ideal setting for a church dedicated to the Prophet Elias. In fact, there is a monastery dedicated to the prophet on a peak of the same name above the mountain town of Zitsa, at an elevation of 780 m. A church and monastery of several monks’ cells dates from the very end of the 16th century. It has splendid and expressive wall paintings, although in part defaced by occupying Turks, their radiance is undimmed. Lord Byron spent two nights here in 1809, and was so impressed he wrote some lines about the monastery:

“Oh Monastery of Zitsa! Happy and holy asylum. Reaching your high and stagnant peak, we bring our eyes down under our feet, above our heads! What a variety of colors worthy of Iris! …” 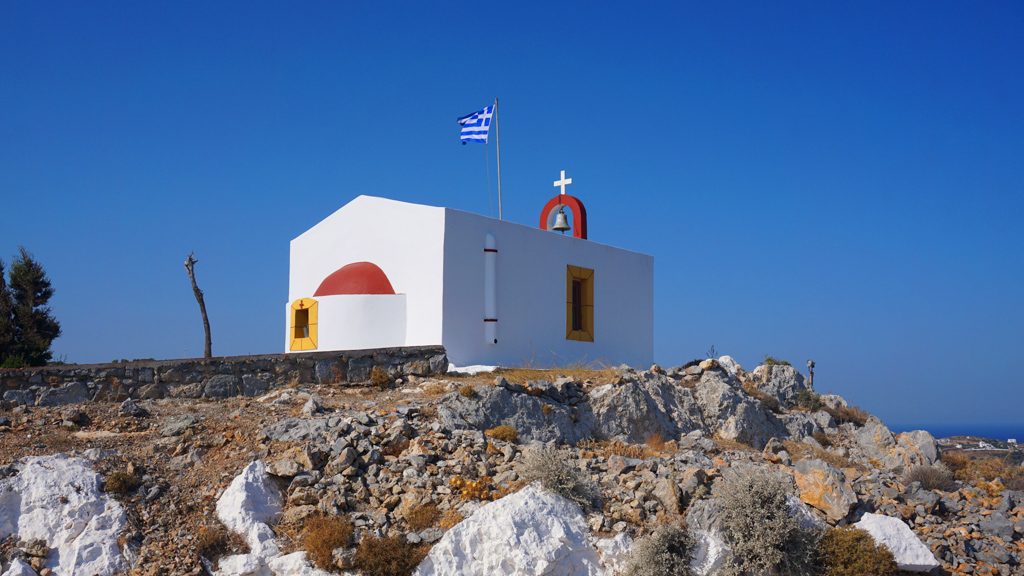 Leros is one of the lower-profile islands of the Dodecanese, and all the lovelier of a discovery for it. This under-the-radar island has a marvelous topography – hilly, rugged, and filled with gulfs and secret coves. Leros has a marvelous castle – Panteli – and very close to this on a peak is the solitary Profiti Elias church, overlooking Agia Maria and the gulf of Alinta. One can drive here, or take the stairs from Platanos, the island’s capital.

Profiti Elias Chania is perhaps the most urban of our selections, high on a hill overlooking the majesty that is Chania. This 16th-century church is not just a religious destination but also historical. 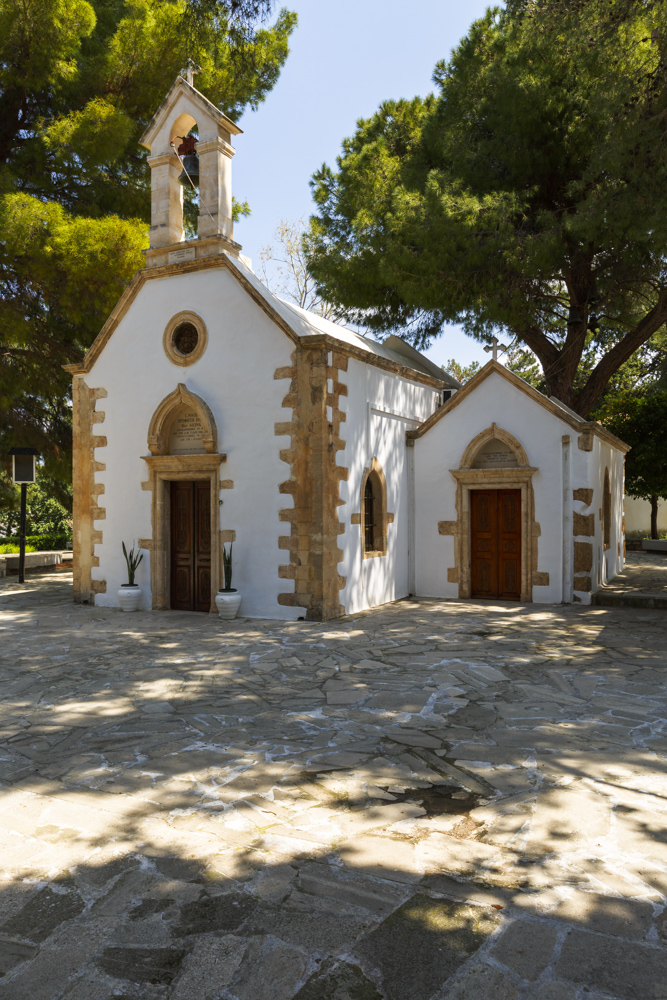 This was the revolutionary headquarters in 1897 – an insurrection against the Ottoman Empire led by Eleftherios Venizelos. The tomb of the great statesman – a Cretan – is in its own lovely park on a cliff nearby. The church of Profiti Elias looks out over this lovely spot.

Churches in honor of Agios Nikolaos

There are a lot of churches named in honor of Agios Nikolaos – Saint Nicholas – in Greece. And there is a lot of sea; Agios Nikolaos is the patron saint of sailors, and therefore we see many churches named for him by the sea. This is the Saint Nicholas we know as Santa Claus – the anonymous giving of gifts was another of his traits. He was born in a port city of Asia Minor, to a wealthy Greek family. His connection with the sea derives from the tale of his visit to the Holy Land, where a terrible storm nearly destroyed the ship he was on, but he managed to make the waves subside. Here are some of the finest places to pay respect to this important Orthodox saint: 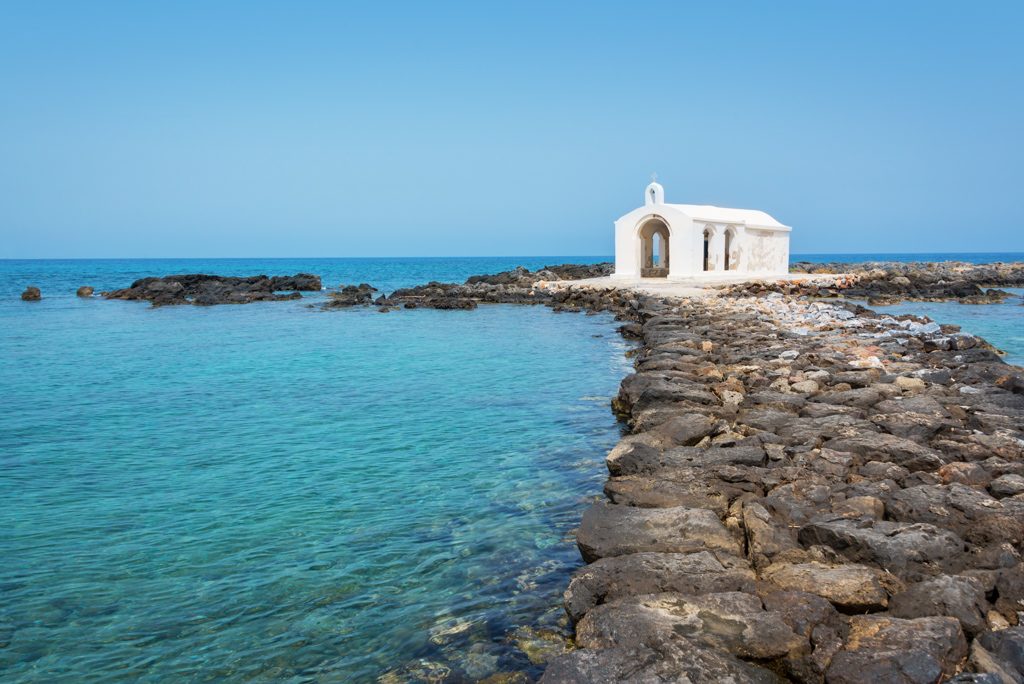 Located just east of Chania in the town of Georgioupolis is a remote and lovely church, on a tiny island of its own. There is a narrow causeway leading to the islet – cross in fine weather to discover a place of absolute serenity in this isolated small chapel. 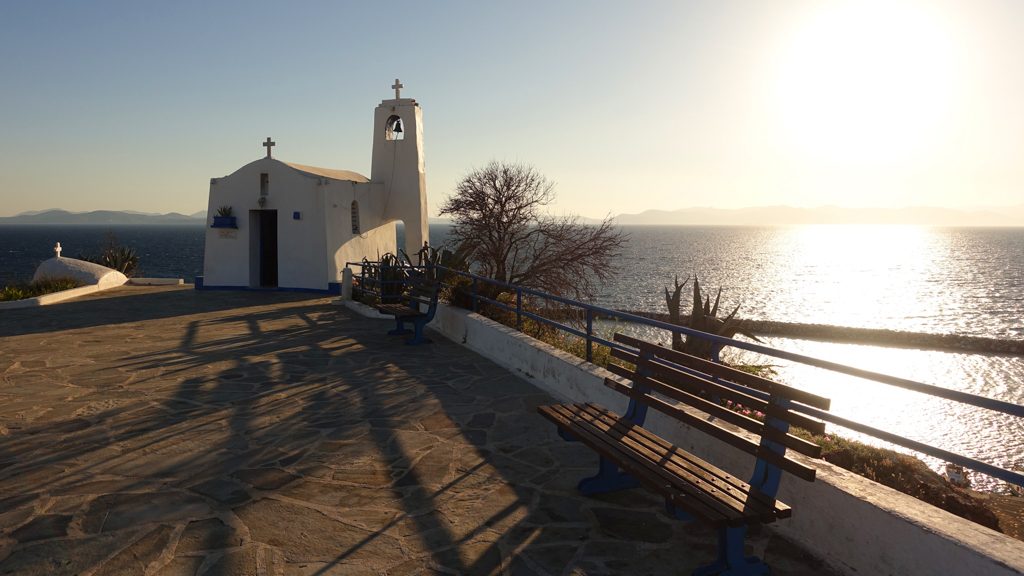 Rafina is a lonely port just outside of Athens to the east, facing the Petalli Gulf. Here, one can catch ferries to many of the islands of the Aegean. On a cliff overlooking this busy harbor is the lovely church of Agios Nikolaos, protecting the sailors and all at sea. The view of the harbor and Evia beyond is absolutely splendid.

Milos is one of the most famous islands in Greece for the stunning beauty and variety of its beaches, each lovelier than the last. Firopotamos is among them, the beach of a tiny fishing village of the same name. It is enclosed in a bay for calm waters, and is further protected by this classic white chapel trimmed in blue, overlooking the sparkling sea.

Beautiful Ithaca, the elusive destination of Odyssea, is one of the gems of the Ioanian sea.   From Marmagkas Beach, on the east coast in the northern portion of the island, one can see a small islet just off shore, perhaps 300 meters from the coast. The island is covered with shrubs and pines, and has this tiny and tranquil chapel, reachable by boat.

On the north coast of Crete, just east of Heraklion, Hersonisos is one of the popular seaside towns. On a small cape just east of town, extending out into the sea, is the small chapel of Agios Nikolaos. It is located right by the original 6th century Byzantine basilica – a much larger structure, whose wonderful floor mosaics are in fairly good condition.

Mykonos is mostly known for its inimitable glamorous international jet-set lifestyle. But there are pockets of tranquility and contemplation on this famously beautiful Cycladic island, and one of them is directly in the heart of Mykonos town – the Chora. 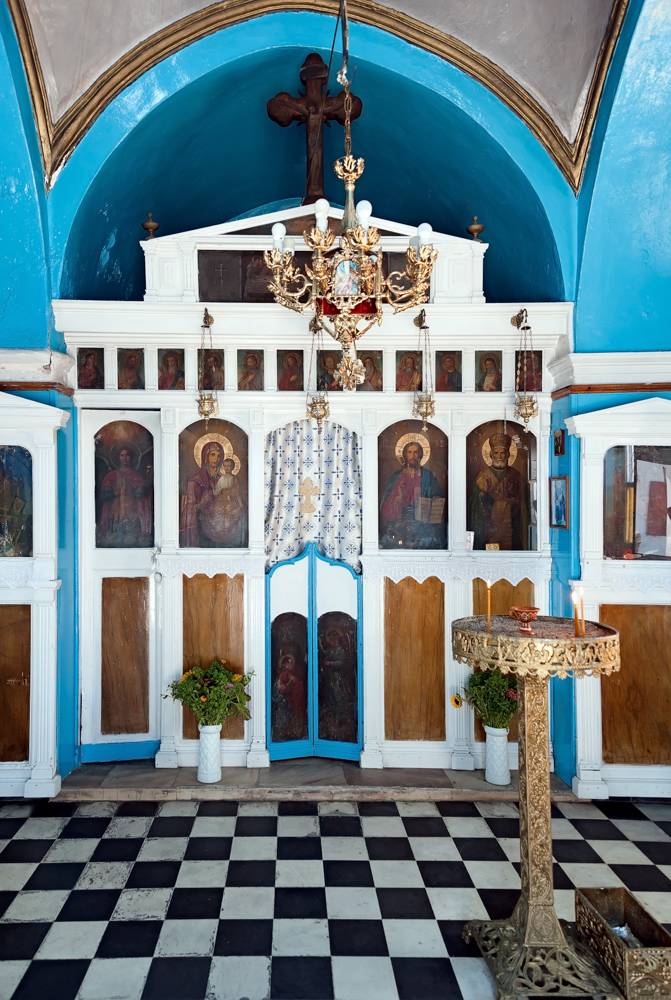 The small 4th century church of Agios Nikolaos is directly at the edge of the harbor, right where the fishermen sell their fresh catch each day at dawn. Amidst the bars of Little Venice and the crowds strolling along the waterfront promenade is this symbol of an authentic, timeless Mykonos.

Have you visited any of these beautiful destinations? If not we would be delighted to plan your next travel experience.