The Art of Pottery in Ancient Greece 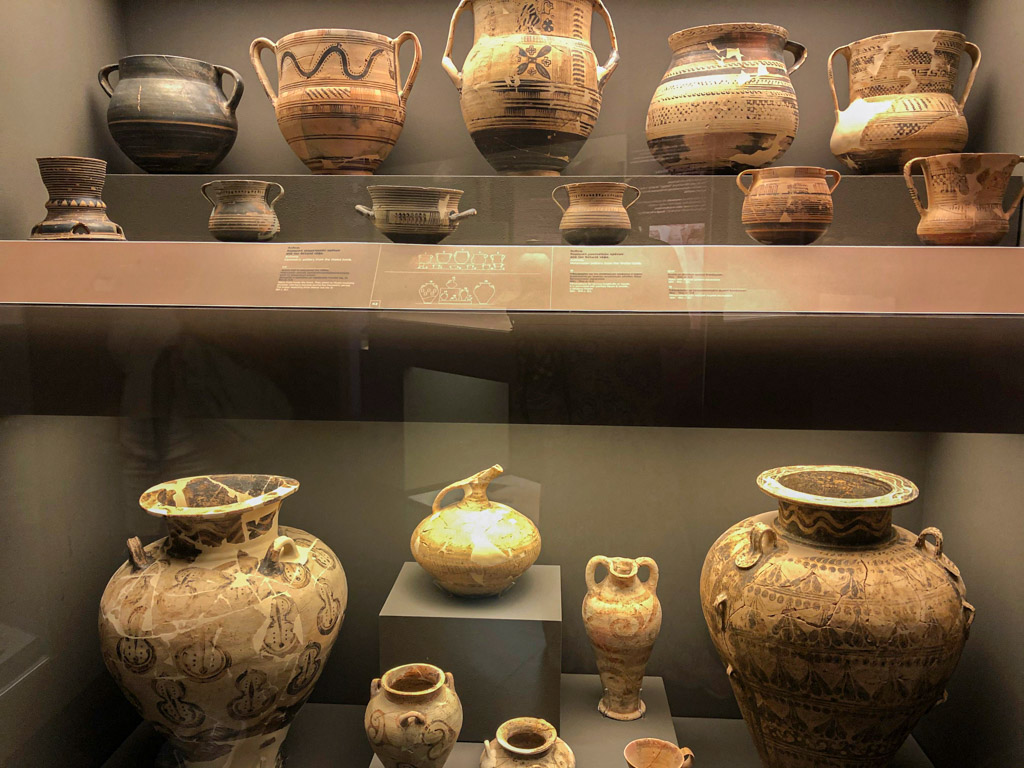 Of the objects of everyday life of Ancient Greece that are the most enduring and the most beautiful, pottery stands out. It combines utility with high art, and with the images and the vessels themselves tell wonderful stories, bringing the ancient world closer to understanding.

The Most Important Pottery Workshops – Athens and Corinth

It makes sense that the largest and most important city would have the finest workshops, and the greatest demand. Therefore, Athens has provided a trove of beautiful and significant findings from the workshops of Attica. Ancient Corinth, too, was prominent in the production of ceramics, particularly during the Archaic period around 800 Bc to 480 BC). Pottery from Corinth was very prized, and exported throughout Greece as well and other locations in the Mediterranean.

The Quality of Clay – Attic and Corinthian 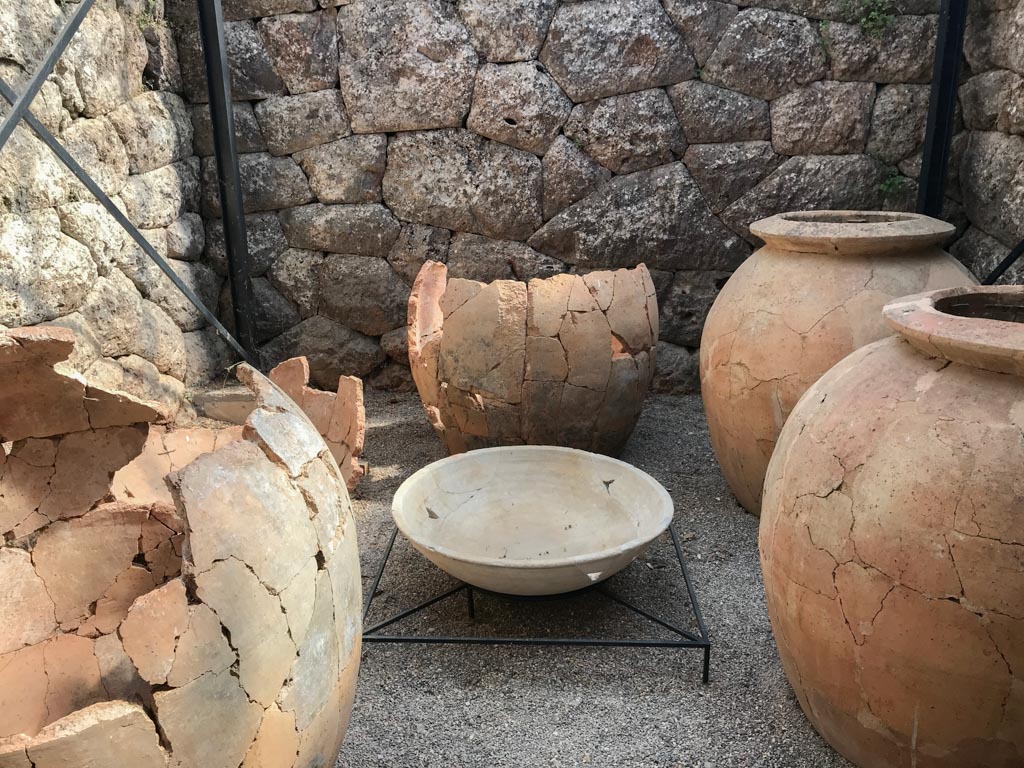 But it was not only the prominence of the cities that led to them having the best and most numerous workshops. It was also the distinctive quality of the clay in the respective regions. Pottery is an expression of the very earth itself. The clay of Corinth and the clay of the Attiki region; the clay of Corinth was a pearly soft gray, sometimes with a hint of green, while the clay around Athens had that deep orange shade – terra-cotta – which is so familiar to us from red-figure and black figure pottery.

Utilizing little more than a black gloss and the natural color of the clay – occasionally with small touches of white or purple – pigment mixed with clay. The resulting images have a startling clarity and bold presence.

A liquid form of clay called a slip – sort of a gloss – would turn black during firing, while the naked clay would retain its original shade.

It was more complicated than it sounds- first the entire vessel would be exposed to air in the kiln, resulting in oxidation. The whole piece would be the color of the clay at this stage. Then, in the second phase, new ‘green’ wood would be added to the kiln, producing smoke and removing oxygen from the kiln, and turning the whole of the piece entirely black. Now that the black of the ‘slip’ had fully developed, oxygen was reintroduced, and the naked clay surrounding the intricate black designs would revert to its natural orange color, resting a vivid contrast and revealing at last the design in black.

Just as it sounds, red figure pottery features figures, objects, and designs articulated in the natural color of the clay against a glazed black background. The method is described as above, and the innovation is largely credited to the workshop of Andokides, emerging toward the end of the Archaic period (around 530 BC) 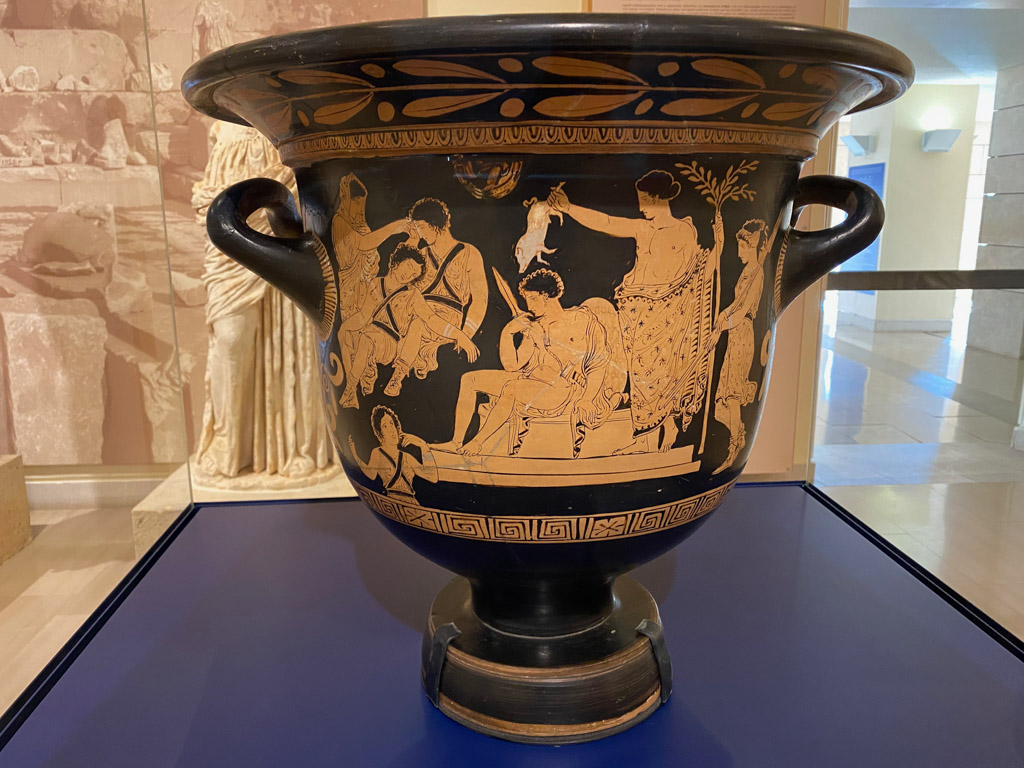 The pale background of white clay gave vase painters more opportunity to play with color and shading. The surface was more delicate than that of red figure and black figure pottery, and therefore these graceful objects were often not for vigorous everyday use, but rather for more  delicate, light use- vessels for perfume, for example. It was also used for funerary objects. 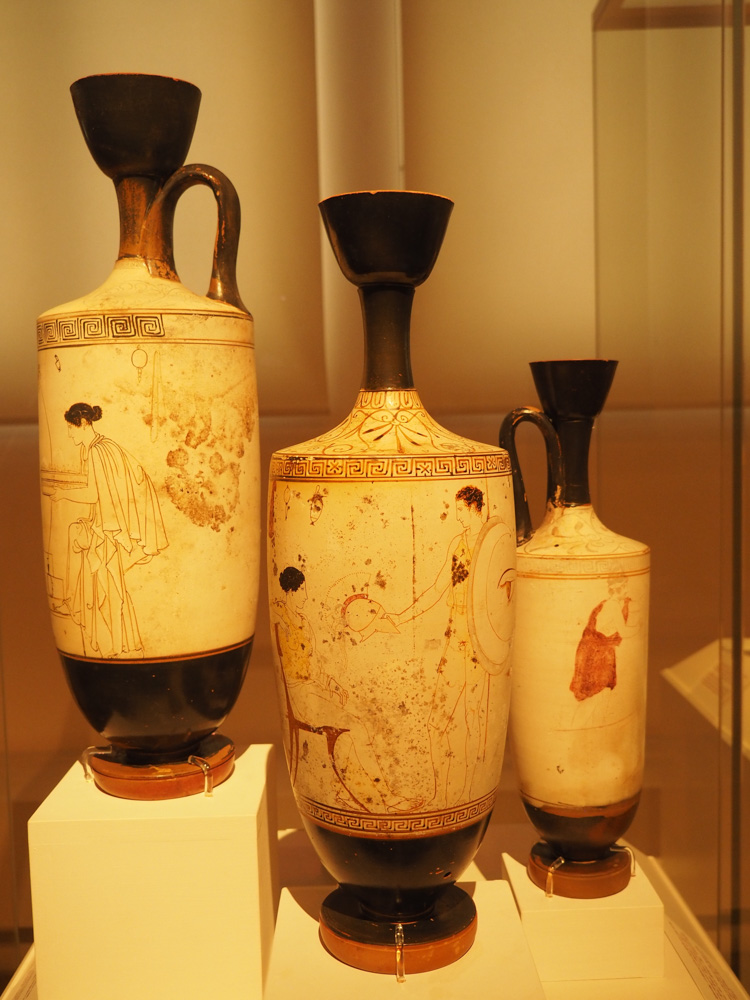 The Uses of Pottery – Part of Every Aspect of Life

Pottery was a fixture of the everyday life of Ancient Greece, just as bottles, jars, pots and jugs are to us today.

Of course large vessels were needed for water and for storage of important commodities – oil, and of course wine, as well as even milk or grain. Such storage vessels are called Amphorae, whose shape tapers distinctively toward the base, and sometimes has no base at all.

The drinking of wine required more than one vessel; a refined activity (at least at the beginning of the evening… ) associated with conversation, wine drinking was a ritual. The strong wine of the ancient world was mixed with water, in a vessel called a Krater. It was then transferred to an Oinochoe – (‘oinos’- wine – is the root of our word oenophile – a lover of good wine) – a pitcher for pouring. It was then sipped from a Kylix, or a Kantharos – each being a beautiful vessel with two handles, the Kylix being wide and shallow, the Kantharos rather taller and deeper, more like our drinking vessels of today. 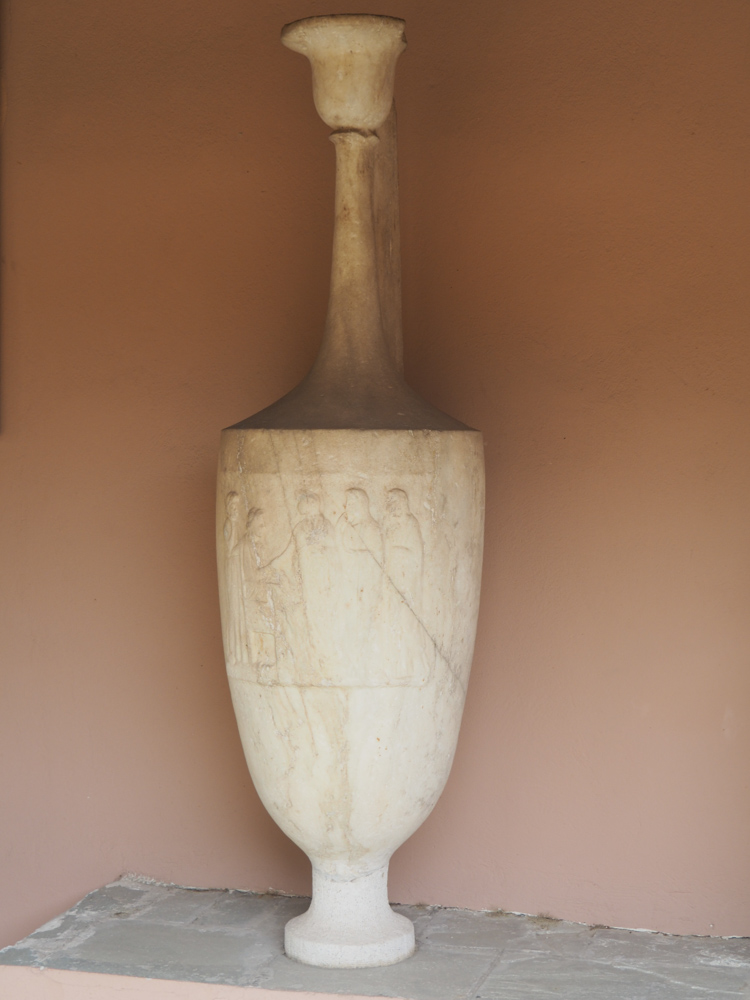 Delicate, decorative vessels were created for perfumes and cosmetics – as we see above, often of white clay.

The Stories the Vessels Tell

The elaborate decoration on the pottery of ancient Greece gives us valuable insight into their daily life. From funerary vessels, we see the death rituals, including visits to the grave with food and libations.

On drinking vessels, we often have decorations on the bottom of the vessel, to be revealed when the wine has been drained in the cup. 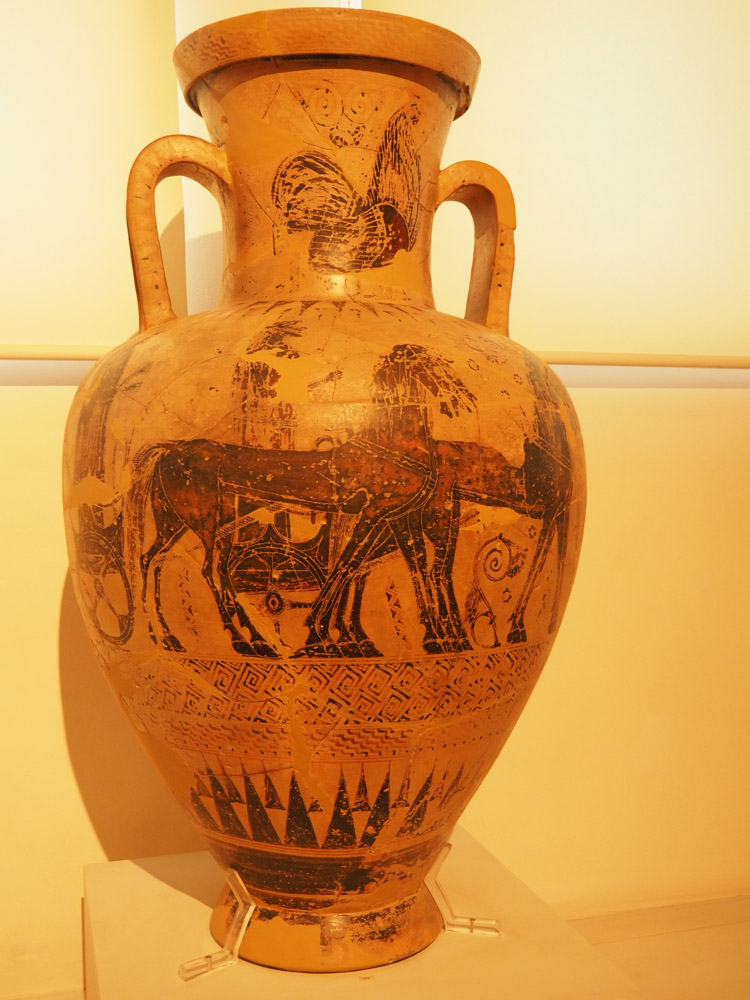 Scenes of everyday life are depicted. The world of women dressing, bathing and grooming were popular themes. Athletics, too, were popular. And for the Symposia, the wine-drinking parties, thematic scenes were decidedly on point: scenes of figures playing instruments were popular. Of course so was Dionysus, the god of wine, sometimes in the company of satyrs – themselves always ready for revelry.

Battle scenes, complete with horses and armor, were a popular theme. And of course, the world of Mythology was an endless source of inspiration.

Much pottery has been found in the Kerameikos district, right in downtown Athens. And every excavation in Greece yields marvelous examples, given how central pottery was in all aspects of life.

Where to See Ancient Greek Pottery 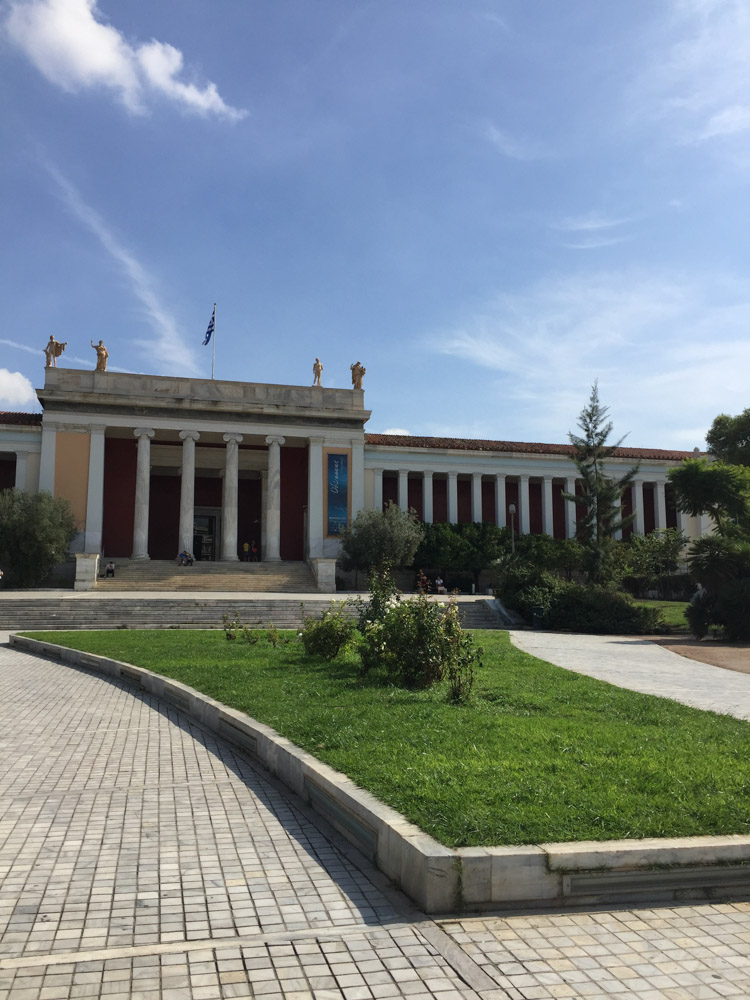 Almost all Archaeological Museums will have fine examples of Ancient Greek ceramics. However, the National Archaeological Museum in Athens has an exceptional collection. The rooms are arranged thematically and historically to give a complete overview. It is a stunning and enlightening introduction to this principal form of artistic expression.

Have you visited the collections of the Archaeological Museum in Athens?