The traditional drinks of Greece are famous all over the world – Ouzo and Retsina particularly.

But how well known are they really? They feature exotic flavors less familiar outside the region, like the anise of ouzo. And resin – an extremely unusual flavor – gives retsina its characteristic crispness and mysterious pine-like essence. Each of these flavors takes some getting used to. But, as countless fans of Greece and all things Greek agree, once you  acquire a taste, the drinks of Greece are infinitely subtle, and extremely delicious. And, as is so true throughout the world, nothing pairs quite so nicely with local cuisines as their local drinks. Ouzo, /tsipouro, and Retsina are very much worth getting to know.

There are several theories as to how ouzo – for many, the very distillation of Greece – got its name. One of the most popular is the phrase “Uso Masallia” – this was marked on crates of silk worms exported, indicating they were suitable for use in Marseilles and meaning they were of high quality. 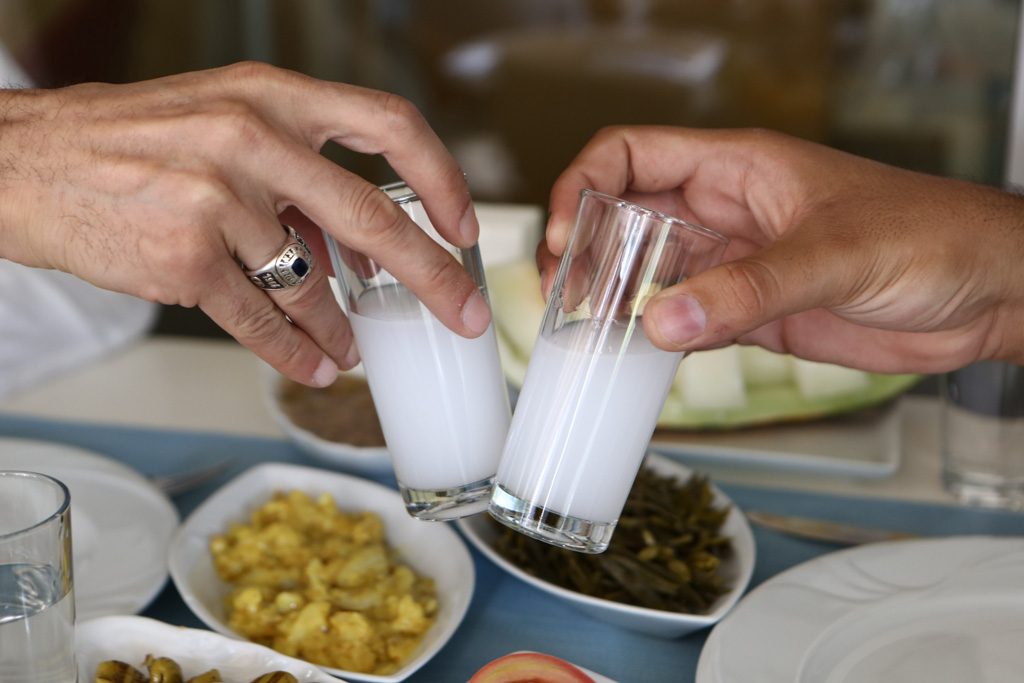 One popular story is that the Ottoman Greek consulate physician was visiting Tyrnavos – a town virtually synonymous with Tsipouro (more on this fine drink later) – and was given some tsipouro. He proclaimed it “uso Masallias!” – in other words – “top quality”. The story spread, and from there, the name.

Alternatively, the name could be derived from the Turkish word for grape – “üzüm”. Or, it could come from “ózó” – an ancient Greek word for smell. This is a logical explanation, owing to the drink’s distinctive aroma.

Ouzo is not dissimilar to Raki in Turkey or Pastis in France. And, as in France, it is nearly always diluted with water. There are three things that make ouzo, ouzo however: 1. It must be made from alcohol of agricultural origin. 2. It must be distilled in a copper still. 3. Best of all – it must be made in Greece. Ouzo has a PDO- Protected Designation of Origin. That means, if it’s not Greek, it’s not Ouzo.

To enjoy Ouzo properly, follow the local example. It’s always cold, and nearly always diluted. Ice is popular, but – interestingly – not where much ouzo is distilled. On the island of Lesvos, only chilled water is used – no ice (it’s said to shock the delicate aromas). Another essential thing about ouzo – it’s always served with, at least, a snack – perhaps some olives or nuts. But it’s also an excellent accompaniment to a table of meze, and particularly seafood meze. The sweetness of the anise is excellent with the salty flavors of the sea. 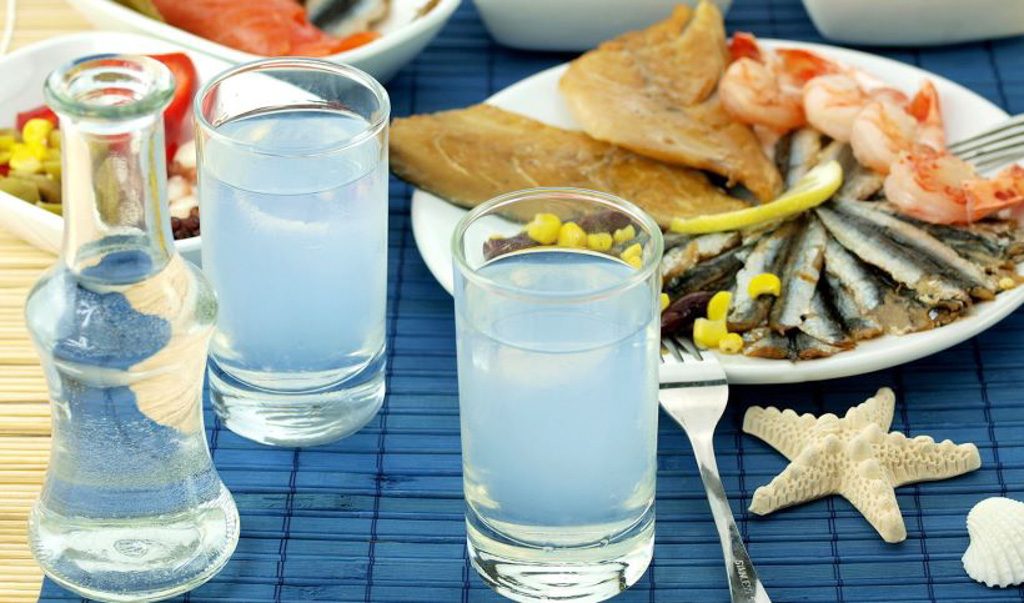 Ouzo is lovely in the glass. It goes in clear. But with the addition of water, it goes cloudy and bluish-white. This is because the alcohol or water are soluble, but the delicious aromatic compounds are not.

This drink, a distillate of the grape mark left over from the wine pressing season, is full of magnificent character, like a good grappa. It is bottled both with and without anise. The finest Tsipouro is said to be from Tyrnavos, a charming town near the city of Larissa. 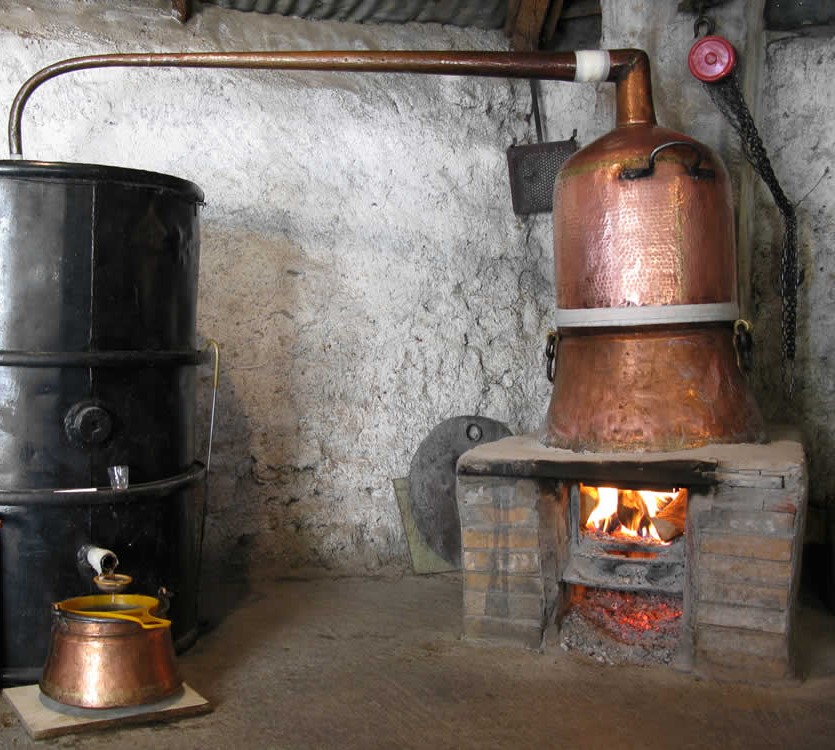 Two great traditions are associated with Tsipouro. The first is a “Kazani” – this is a distilling party. Friends and family gather around the still as the fragrance of grape fills the air. They snack on whatever is to hand – olives, pickled vegetables, and fresh grilled sausages and pork chops are popular – and wait for the first drops to flow from the still. The first tsipouro is too strong, with a very high alcohol content – and the last too weak. One drinks from the generous middle portion.

The second great tradition can be experienced in the gorgeous seaside city of Volos – the gateway to the lush region of Pelion. In Volos, the “Tsipouradika”- tavernas serving tsipouro and meze – have a novel approach. You order just the tsipouro- not the food. The tsipouradiko owner knows what is best, freshest, and most delicious, and will bring plates with each order, following a logical progression to make for a unique, expertly curated tasting menu.

Honestly, for many people retsina is surely an acquired taste. In fact, retsina is described in “The Greek Islands” by Lawrence Durrell (not in his own words but in his reported account of a friend), as famously tasting like “turpentine which has been strained through the socks of a bishop.” If this were your introduction, one can see you would be hesitant to try it. 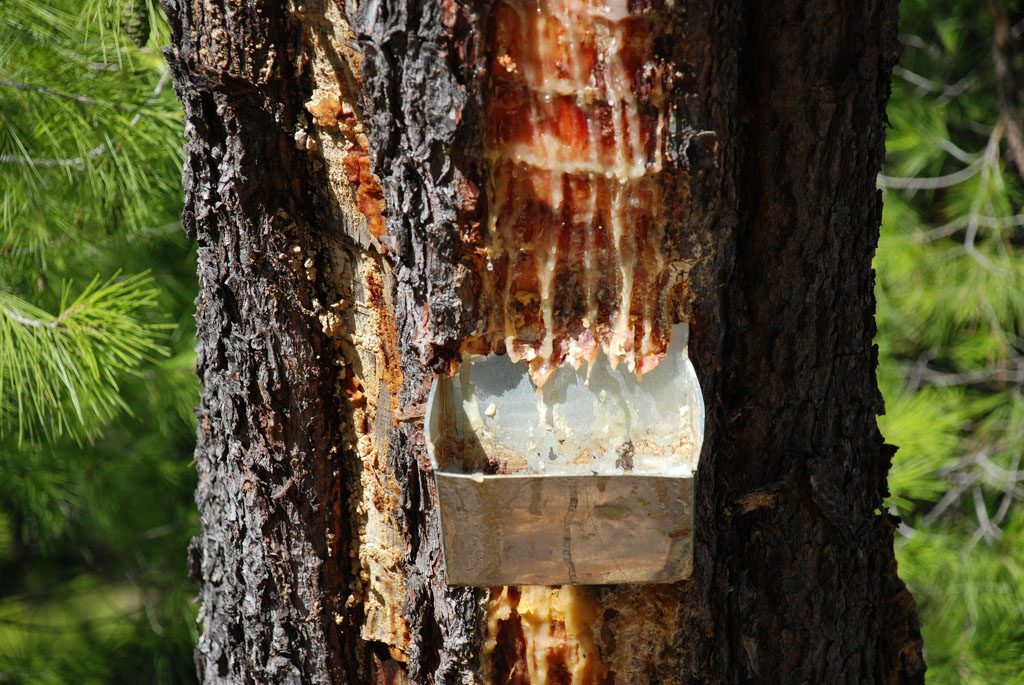 In fact, retsina is a revelation. Some do like it right off. But resin is a distinctive aroma, and takes other tasters a few tries. There will be a moment – probably under the glorious Greek sun – with just the right food, that a cool glass of retsina suddenly seems so absolutely right. This refreshingly crisp and fragrant white wine is heavenly with many Greek dishes, and has enough of a personality to stand up to bold flavors. It is also wonderfully refreshing.

How did retsina – a resinated wine – come to be? Wine amphorae were once sealed with pine in ancient times for transport and good storage, and barrels may also have been made with pine. People learned to like the flavor, indeed welcome it. 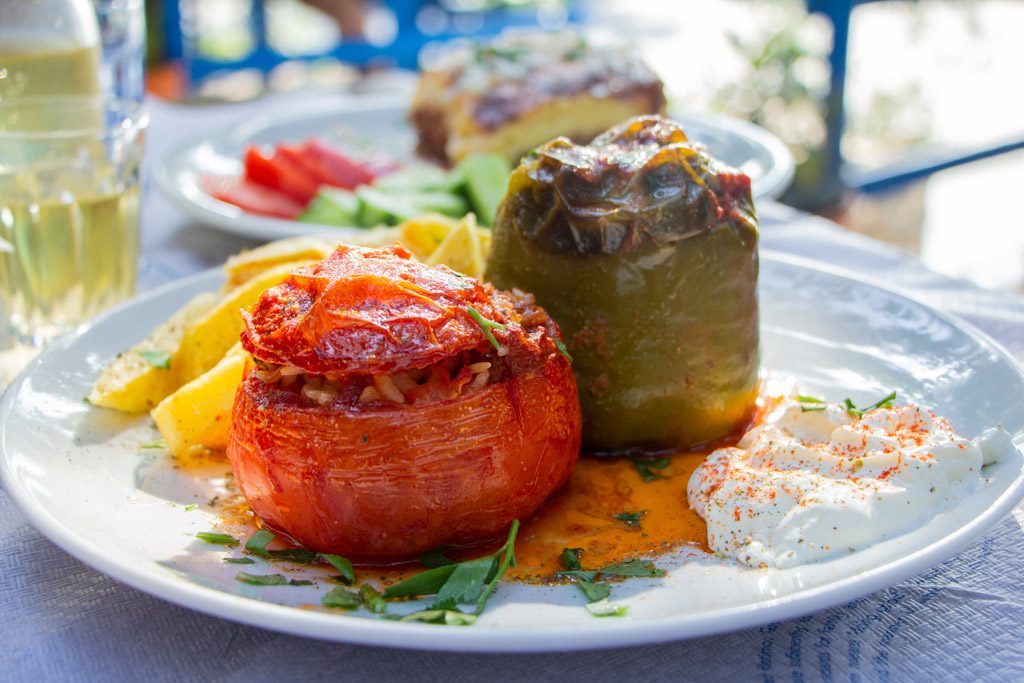 Of course, the fragrance of pine can conceal many an otherwise ordinary, or even lesser-quality, wine. Retsina in its characteristic classic half-liter bottles capped with a metal cap just like a beer is indeed inexpensive. This, combined with the fact that much was made with a high-yield but not necessarily high-quality grape, caused its reputation to suffer.

Bur contemporary Greek winemakers have been producing some retsinas of extraordinary quality. This renaissance of what is essentially a taste of the ancient world is an exciting thing to drink.

These sophisticated wines from prestigious vintners unite finer wines – using finer grapes than the usual retsina – with this ancient aroma to beguiling effect. This new breed of fine retsina is a revelation. Some bottles capturing the affection of oenophiles include the Kechris Estate’s Pine Tears – considered the inspiration of this renaissance, Gaia Estate’s Retinis Nobilis, Garalis Retsina – a natural winery on the island of Lemnos, using the characteristic muscat grapes, and  retsinas from Georgas, both white and slightly colorful editions.

A wine tour focusing on the new retsinas would introduce the visitor to a wide variety of Greece’s wine-growing regions, such as the famous wine region of Nemea, to Thessaloniki – a starting point for the superb wine roads of Macedonia, to the island of Lemnos, to Spata – nearly in Athens’ backyard.

Additionally, you will be travelling through time, tasting, in essence, an aroma enjoyed by the Ancient Greeks.