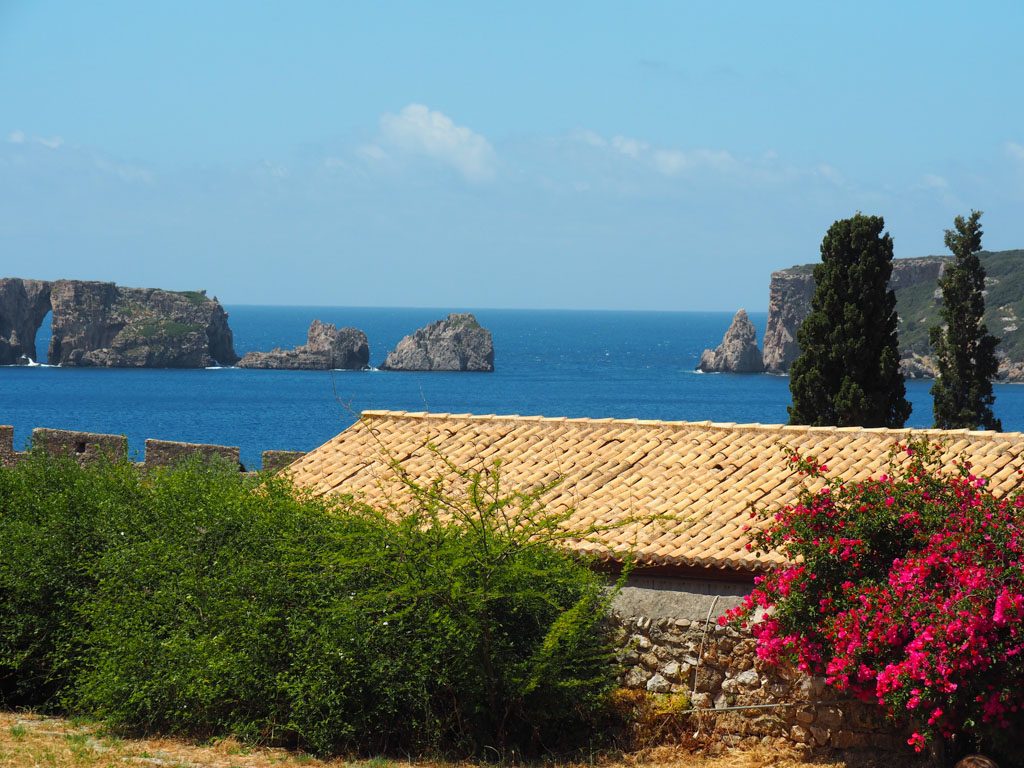 The Mycenaeans – a Glorious Bronze Age Culture of Greece

The Mycenaeans, who flourished during the last phase of the Bronze Age – From 1600 to 1100 BC – represent the first distinctively Greek advanced civilization of mainland Greece. The contributions of this civilization include advances in engineering and architecture, as well as letters – Linear B offers the first written records of Indo-European Greek Language. They were skilled warriors, lovers of art and beauty, and successful traders throughout a large area of the Mediterranean.

The Cultural Heritage of the Mycenaeans

In the Mycenaean, reality and myth converge. Some Mycenaean sites and artifacts have acquired a magical aura from mythology.

Agamemnon, the mythological King of Mycenae, was immortalized by Homer in the Iliad. He inspires us still, and served as the magical lure that led Schliemann there. 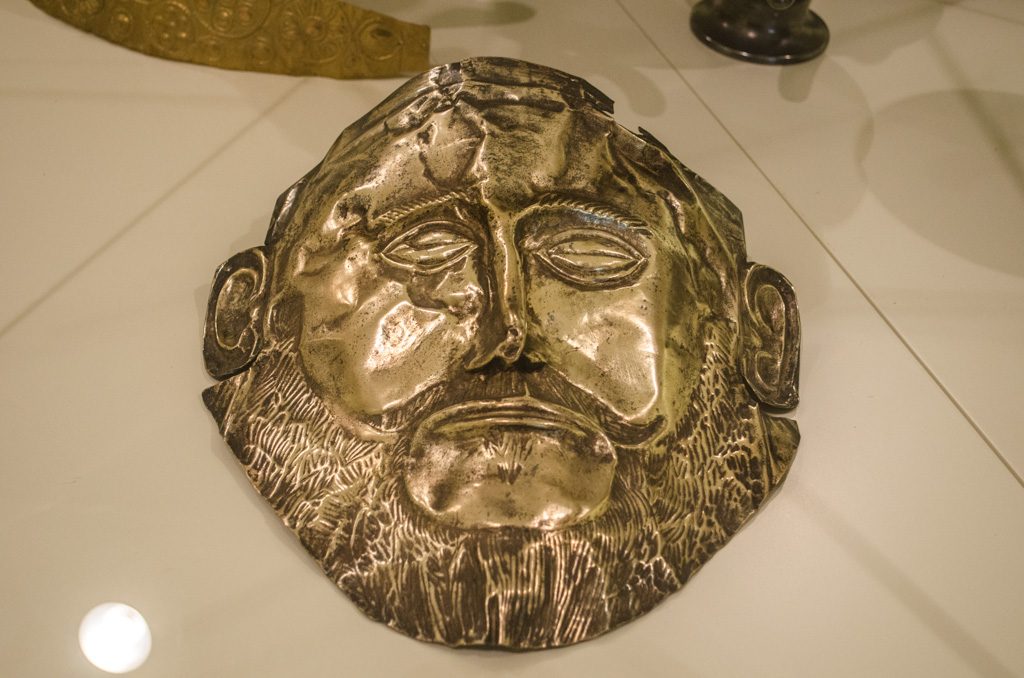 It was this mythical king who led the Greeks to battle in the Trojan war, as narrated in the Iliad, the epic poem of Homer. And it was this tale that drew the archaeologist Henrich Schliemann – known for excavating Mycenae – to the site. When he discovered the shaft graves that Mycenae is known for, he discovered a fabulous gold mask. On finding it, he is quoted as saying that he had “gazed upon the face of Agamemnon.”

Reality and mythology came together once again. Paris and Helen may live in the realm of mythology. But that the myth of a war between Troy and Mycenae had its roots in fact has been supported through excavations. There are Mycenean graves near Ancient Troy.

The Mycenaeans and the Minoans

When the volcano at Thera brought a swift end to the Minoans, the Mycenaens were primed to take over their prominence in influence and trade. Mycenae prospered, increasing their trade routes in lands as distant as present-day Spain, Italy, Cyprus, and Jordan.

Exploring the Argolid and the Peloponnese 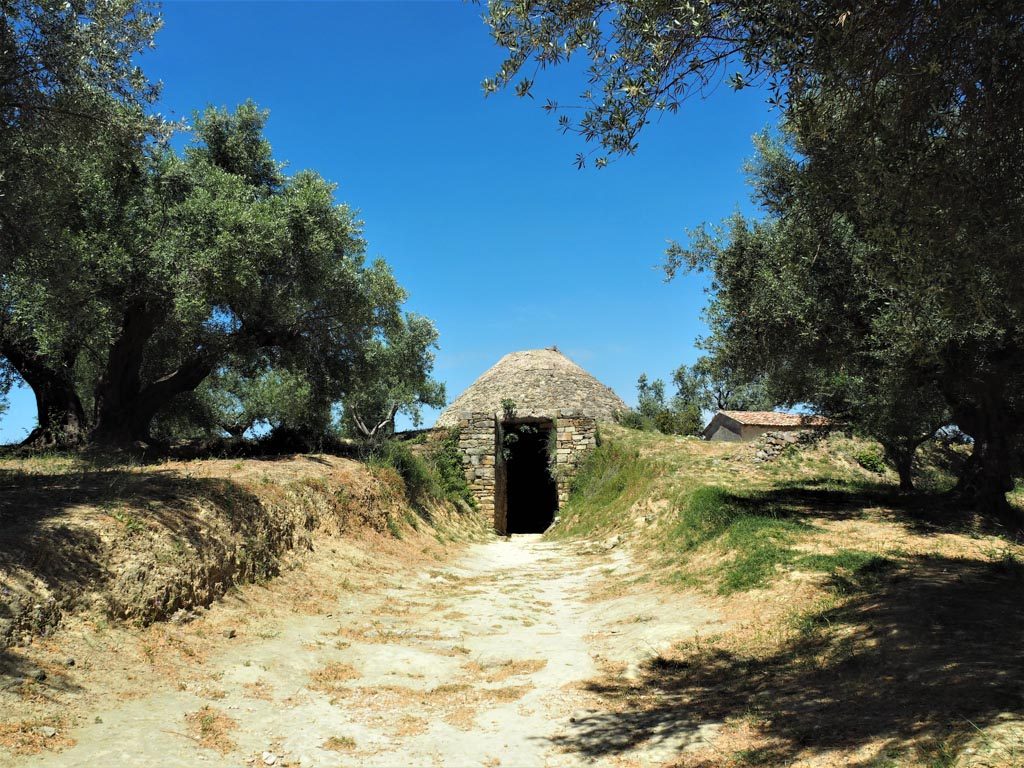 This storied region is one of Greece’s most fascinating. The trail of the Minoans brings visitors into the Argolid, the peninsula in the Peloponnese’s east, to Pylos, in Messinia in the western part of the Peloponnese. These areas are rich in culture, history, and astounding natural beauty.

Discovering the Sites of Mycenae- the Argolid

This civilization takes its name from Mycenae, the site of their largest palace. This dramatic archaeological site was excavated initially by the Greek archaeologist Kyriakos Pittakis, who uncovered the iconic Lion’s gate in 1841. Further excavations were carried out by the illustrious archaeologist Heinrich Schliemann in the 1870’s. Schliemann is also known for his excavation of Ancient Troy. 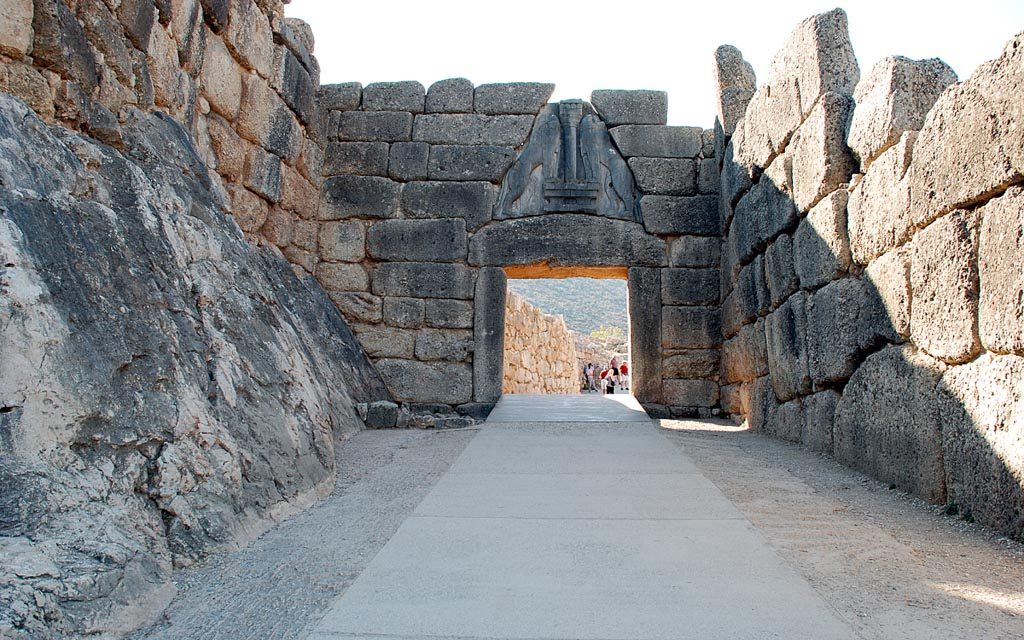 The Lion’s Gate is a thrilling site, familiar to all lovers of ancient archaeology. It is so called for the relief sculpture of two lions grandly placed over the doorway. The Cyclopean walls, too, are dramatic in themselves. This formidable example of masonry is called Cyclopean on account of the massive stones, so very large – around 8 meters – it was said that they must have been placed by the mythical Cyclops himself. Such Cyclopean walls characterize all the archaeological sites of the Ancient Mycenaeans.

This magnificent Citadel dramatically overlooks the valley of Argos. The strategic location commanded routes to the isthmus of Corinth. The fertile valley offered good farmland and water.

The Shaft Graves, unearthed by Schleimann, are among the most fascinating findings. Here the noble dead were buried with riches, their faces covered with gold masks. It is here that Schliemann discovered one of the most iconic images of Mycenae – the mask of Agamemnon.

The Treasury of Atreus 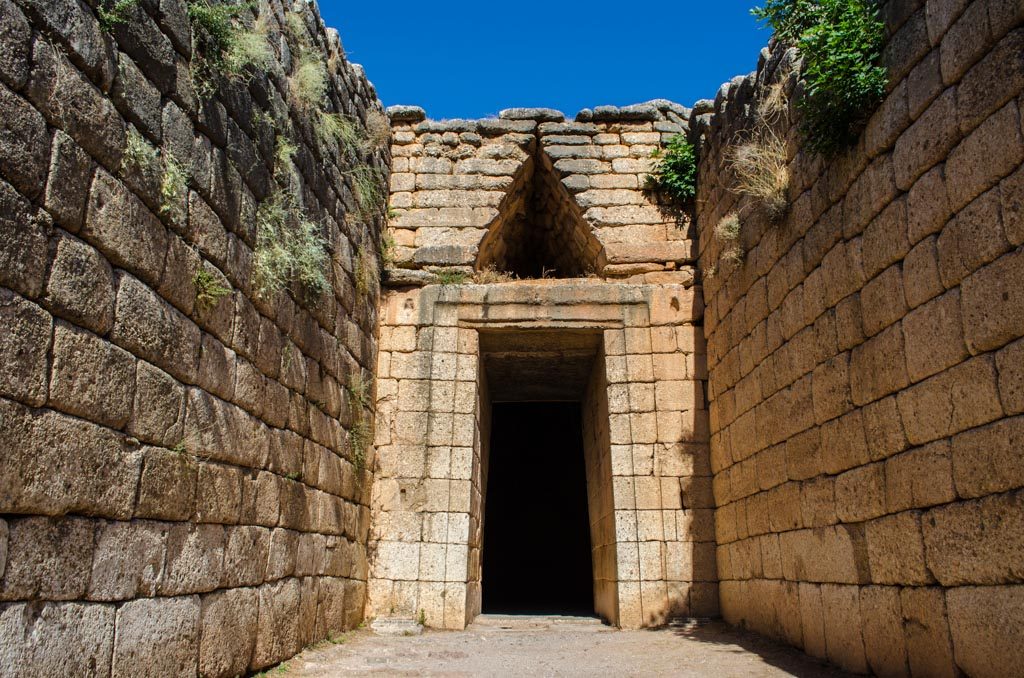 The Treasury of Atreus, or Tomb of Agamemnon, is another striking sight at Mycenae. Accessed via a walled entrance built into the side of a hill, it is entered through a doorway topped with a tremendous lintel. Above the stone lintel is a triangular opening – also a familiar site to archaeology enthusiasts. The tomb is not historically related to wither Atreus – the Mythological king of Mycenae – not to Agamemnon – his son who also became king. But this was the name that sprang from the imagination of Schliemann, and captures ours still.

Other Sites of Mycenaean Glory in the Argolid

There were also other palaces and sites of the Mycenaeans close by, and visiting them all makes for a fascinating itinerary. 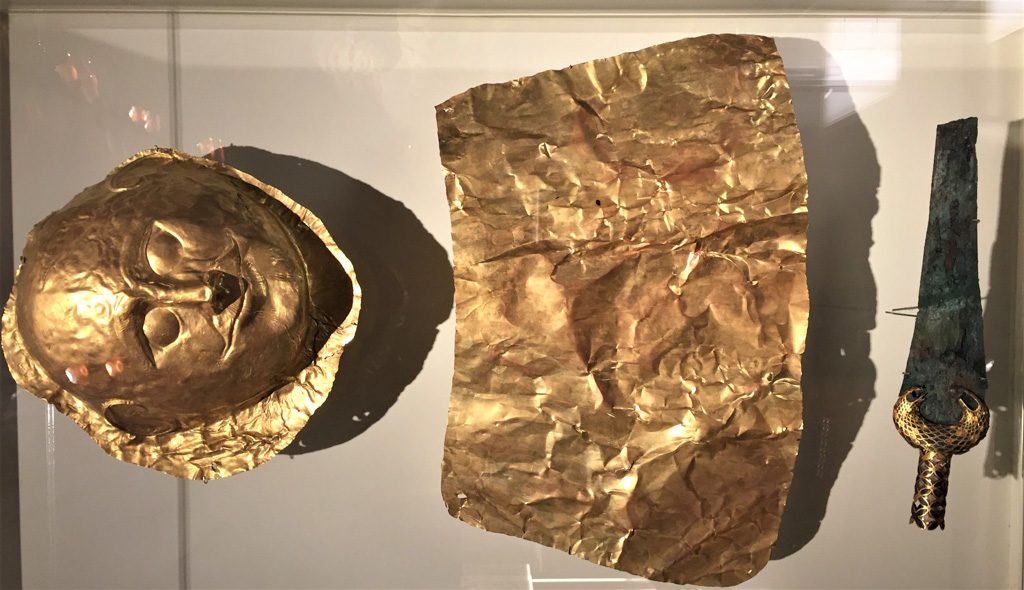 This Mycenaean site, also referenced by Homer (“Mighty-walled Tyrins) is also known as the place where Hercules lived while executing his famous 12 labors. It was also excavated in part by Heinrich Schliemann.

The Mycenaean Acropolis of Midea, located between Mycenae and Tyrins and close to both, is considered the best preserved of the Mycenaean citadels. Here, one finds also a Tholos tomb (a mound), as well as a cemetery of Chamber tombs. The citadel of Midea, built upon a conical hill that is 270 meters above sea level, and 170 meters above the surrounding planes, is impressive on approach.

The Palace of Nestor at Pylos, in the Western Peloponnese

At some distance from the concentrated sites of Mycenae, Tyrins, and Midea in the east is the Palace of Nestor at Pylos. This marvelous archaeological site is the best preserved of the Minoan Palaces. Originally a two-story structure. The site has been recently re-opened to visitors.

This was an important administrative center for the Mycenaens, as evidenced by linear B tablets found at the site. Nestor is another figure familiar from Homer, immortalized as the King of “sandy Pylos.” Pylos is also known by its Italian name, Navarino.

The Pleasures of the Peloponnese

The Ancient History of this region rewards exploration. But the Peloponnese is also full of other charms. The landscape itself is glorious. Here you will find some of Greece’s most famous beaches, like Voidokilia in Messinia, a stretch of silken sands that cradles a turquoise sea in an arc so perfect it seems to have been drawn by the compass of the gods. This is also the home of lush Arcadia. 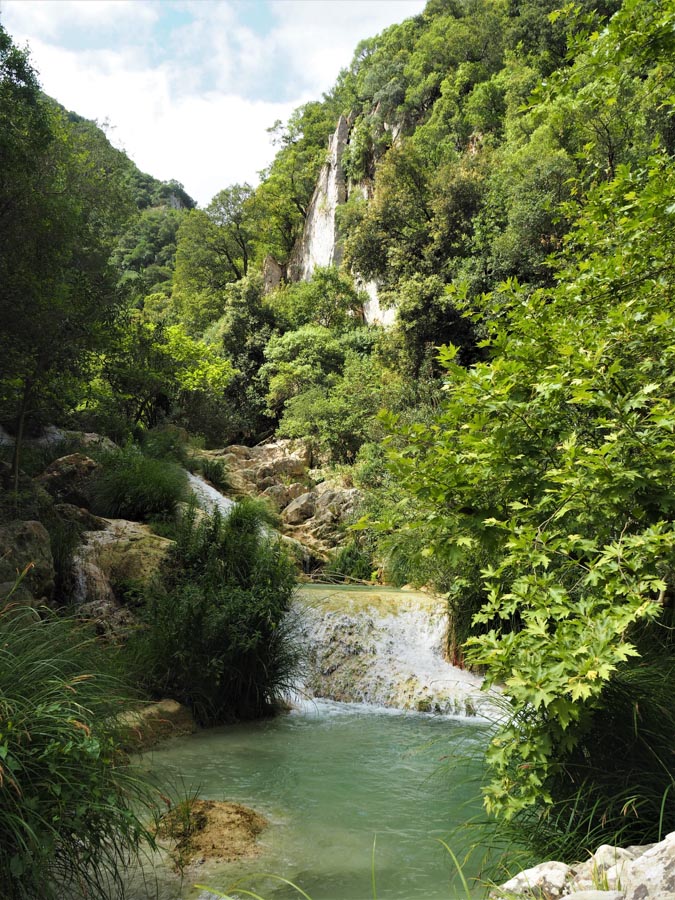 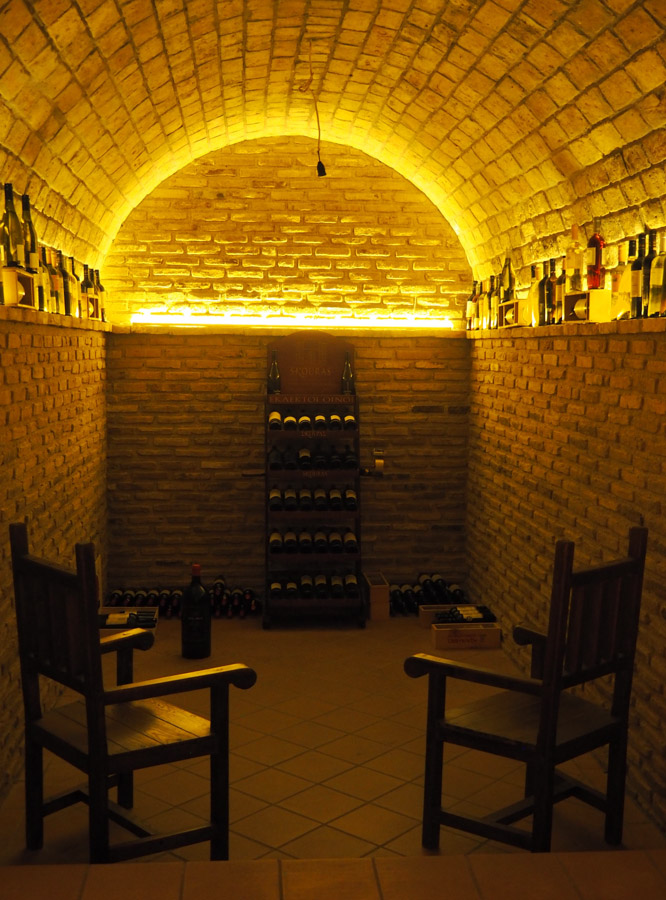 Lastly, the urban centers of the Peloponnese have much to offer the visitor. Pylos is a wonderful town, rich in history, with Ottoman and Venetian structures adding to its charms. Kalamata with its endless beaches and the towering Mt. Taygetus in the background is a delight, full of cultural attractions like a medieval castle, 19th-century churches, and Neoclassical elegance. There is a vibrant cultural scene. 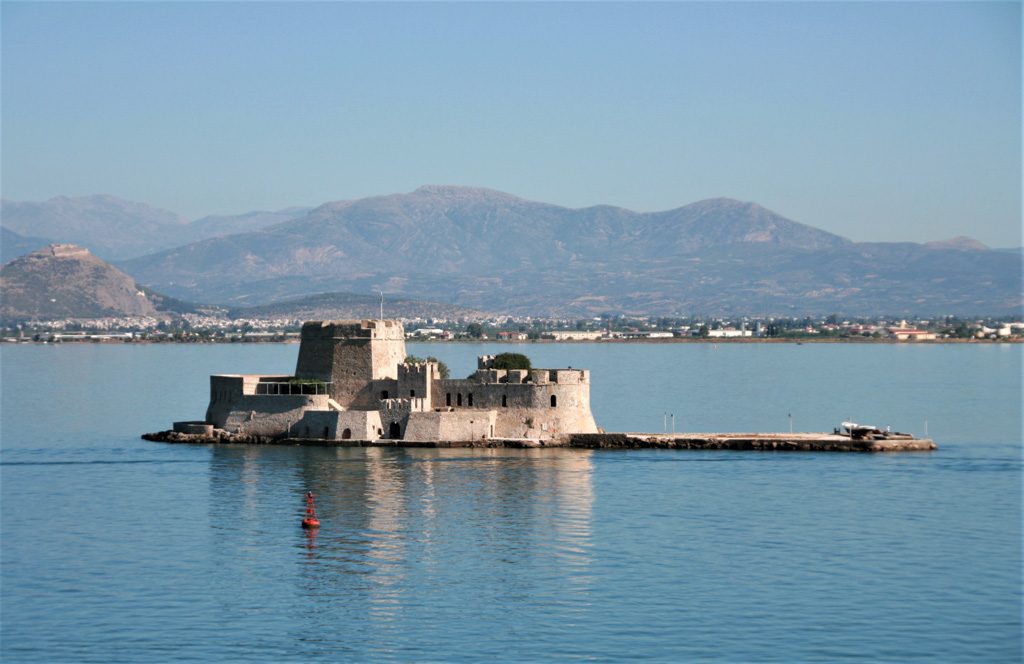 Near the Mycenaean sites of the Argolid is splendid Nafplion, one of Greece’s loveliest cities, and the first capital of Modern Greece. This seaside fantasy of a town is full of pastel colored homes and romantic alleys, the beautiful fortress of Bourtzi on its own tiny island, and one of Greece’s most glorious fortresses- the Palamidi Castle, an impressive 216 meters above the city.

Have you ever visited the Peloponnese? Following the trail of its illustrious early inhabitants is a wonderful occasion for exploring one of Greece’s most fascinating regions.

Tags: fly me to the moon travel, luxury travel experts, travel designer
Previous Article
Next Article
This website uses cookies to improve your experience. We'll assume you're ok with this, but you can opt-out if you wish. Accept Read More
Privacy & Cookies Policy