Greek Christmas Traditions - a Unique Celebration of the Holidays

Greece has some unique holiday traditions that set the celebration of Christmas and New Year’s in Greece apart. Here are some of the things that make the Greek holiday season special.

Of course, the traditional Christmas Tree is as beloved a decorative symbol of the season as it is elsewhere. But its introduction into Greece is more recent – many have it that King Otto introduced it in the 1830’s – an imported custom of his native Bavaria. 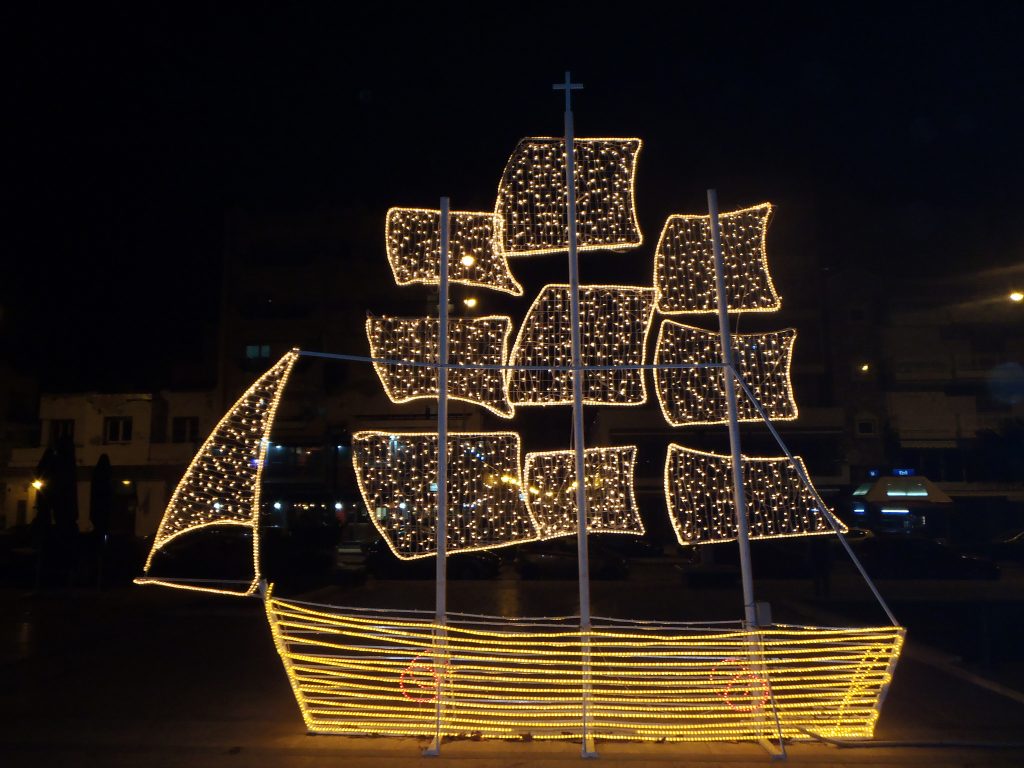 However, the most authentic native symbol of the holidays for Greeks is not the Christmas tree, but rather the Christmas boat. For generations, in this nation of over 200 inhabited islands and hundreds of kilometers of mainland coast, it was the boat that symbolized Christmas. It is boats that brought – and still do bring – loved ones together to share the joy of the season. Now, town squares all over Greece will often have a boat decorated with lights sharing the stage with a Christmas tree. Many homes also have a smaller boat with lights as part of their essential holiday decor.

The Nativity Scene is also a feature of most cities and towns. In Greece, a manger filled with hay and figures of Mary, Joseph, and the wise men is an important symbol of the holidays. A figure of the baby Jesus joins the scene on Christmas.

Christmas in Greece is first and foremost a religious holiday. For many devout Greeks, the observation of a fast before Christmas is an important part of the holiday – just like it is before Easter. And a visit to Church is also central to the holiday celebration.

… And a Christmas Feast

A holiday in Greece is not a holiday without feasting, and Christmas is not an exception. This is one day that many Geek families enjoy a turkey – a fowl otherwise not so commonly eaten in Greece. 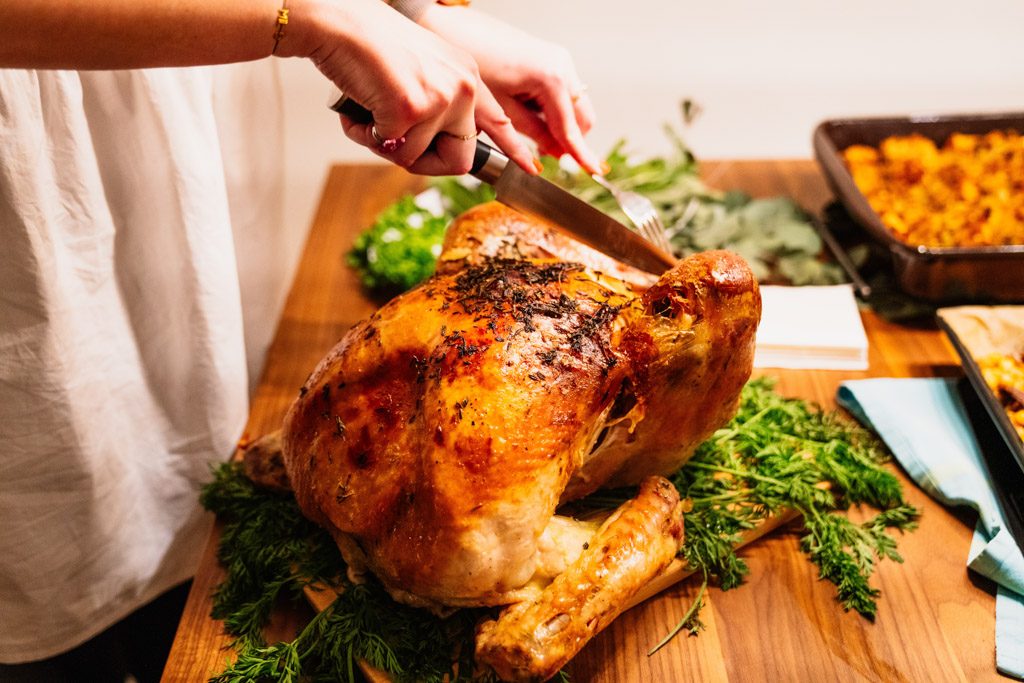 It is stuffed with rice and very often with chestnuts. The roast stuffed turkey shares the table with some other traditional festive dishes, among them very often are “lachano dolmades” (stuffed cabbage leaves) and several types of pie with hand-rolled phyllo. 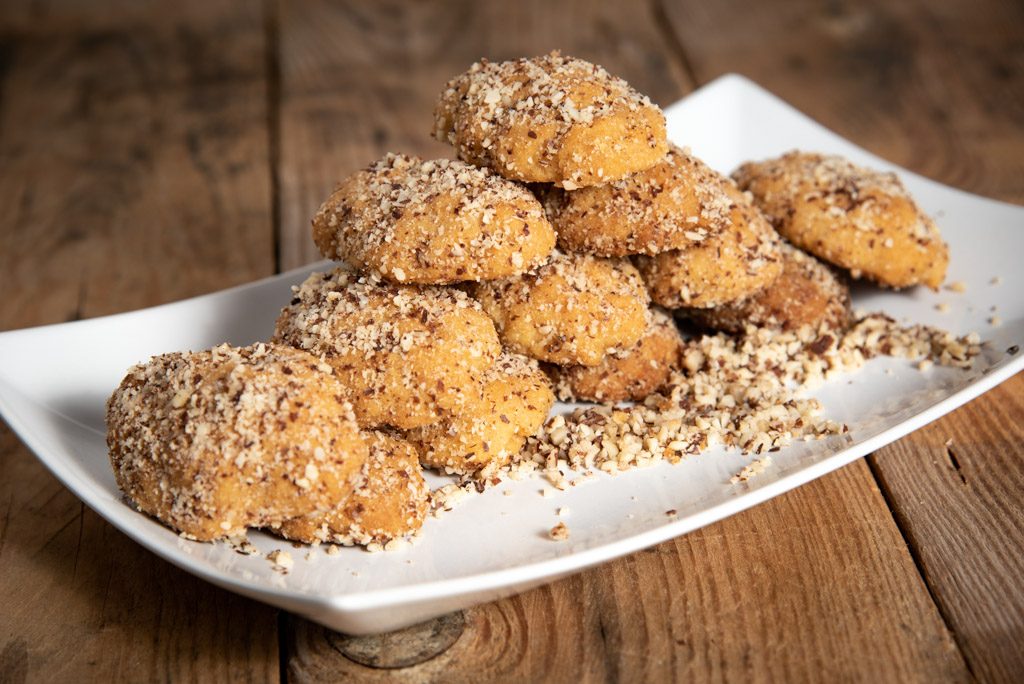 Unlike the huge array of Christmas cookies that one sees in many nations, the Greek Christmas features mainly just two cookies. Every shop window and every home has platters of both “Melomakarona” – a soft and spicy cookie with honey syrup and walnuts – and “Kourabiedes” – butter cookies dusted with snowy clouds of icing sugar. With two such perfect choices, you don’t need anything else. Of course, gingerbread houses have also joined the sweet scene.

Now, this is something that truly sets Greece apart. While you will now hear many familiar Christmas songs that are part of the international holiday soundtrack. But the caroling tradition in Greece centers on one specific song – or actually, three – one is for Christmas eve day, one is for New Year’s Eve day, and one is for the day before the Epiphany. Children go from house to house to sing, as they ring triangles. 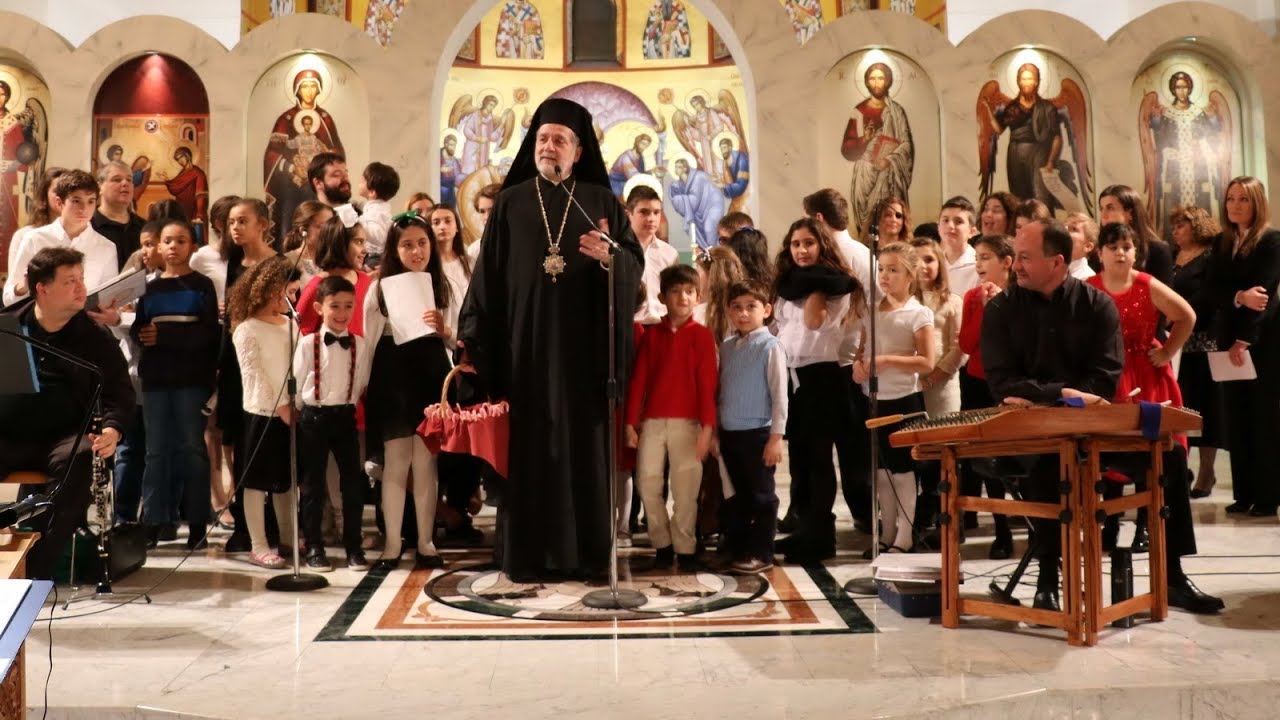 Traditionally one gives them some change, and if one knows the children personally, usually a more significant amount of money. Nowadays, groups of children also visit shops and buses. Keep plenty of change on hand to reward the youngsters for keeping up this tradition. Sometimes, groups of teenagers and students also carol, with instruments and a more professional production, to gather money for charities.

One of the things that really sets Christmas in Greece apart is the fact that gifts are not a big feature of the holiday. This is because it is not Santa Claus or Saint Nicholas that brings presents, but Saint Basil – “Agios Vasilis” – and his feast day is actually January first. So the main gift-giving holiday in Greece is not Christmas, but New Year’s. 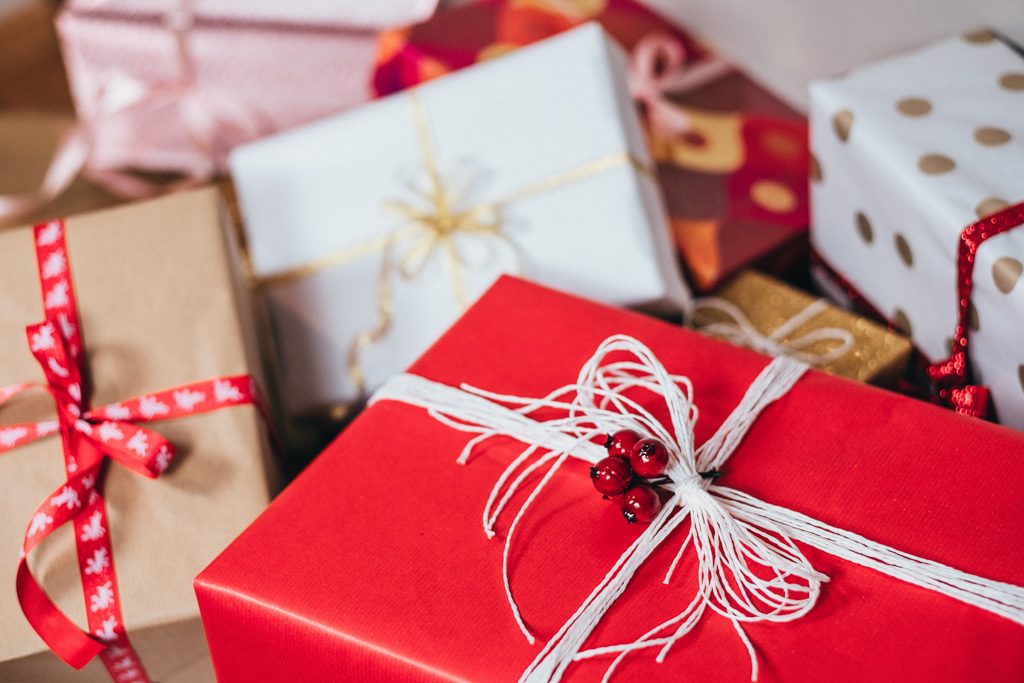 This keeps the emphasis on the birth of the baby Jesus for Christmas, which makes the holiday very special.

Rather than Santa’s helpers, the whimsical small creatures associated with the holiday in Greece are Kalikantzari. These are more like goblins than elves – dressed in black rather than red and green – and bent on making mischief. They feature in many Christmas pageants at schools. 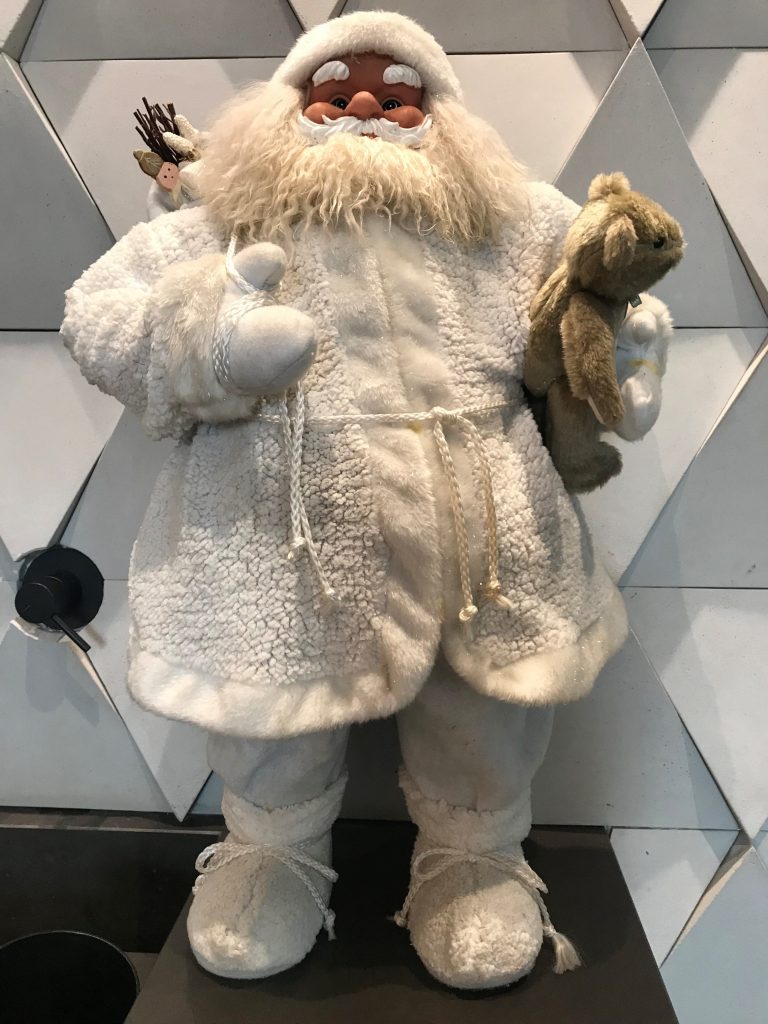 This association of Agios Vasilis and the New Year makes New Year’s Eve in Greece much more of a family holiday than it is in other countries. Children are the focus.

Another festive meal brings family and friends to the table, for another turkey or perhaps a great roast of pork or of lamb or goat surrounded by lemony potatoes and fresh herbs. There are a number of festive desserts including more melomakarona and kourabiedes. 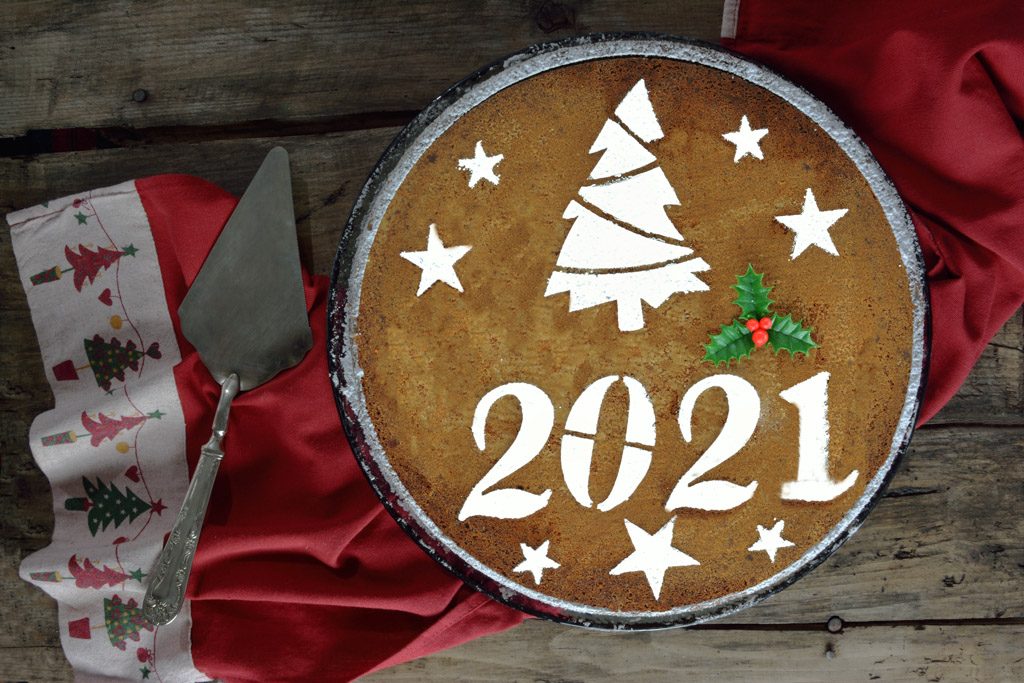 But the showpiece is the “Vasilopita” – the pie of St.Vasilis. This sweet cake varies from house to house – some preferring a true cake, and others a sweetened rich yeasted bread more like a tsoureki. What they all have in common is a coin, hidden in the dough. When the pie is cut, everyone looks to see who got the coin (even absent family members have a piece cut for them), and the good luck of the coming year.

Good Fortune for the New Year 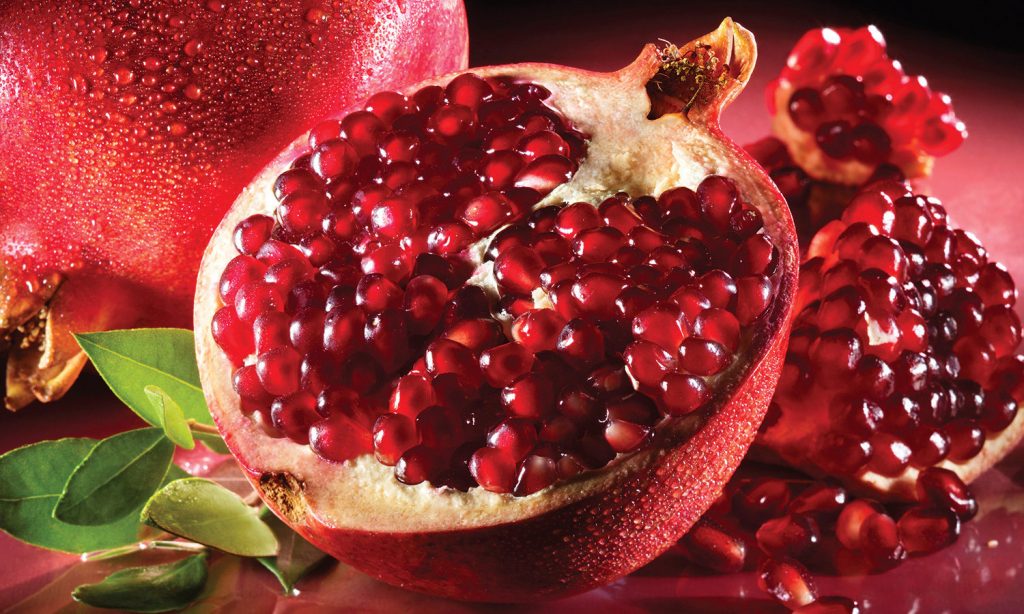 Real pomegranates also feature in the holiday as decoration. And in some households, children break one in the entrance to the house for good luck. These are usually first wrapped in a bag (there is nothing that stains quite as much as pomegranate juice).

Of course, after the family celebration, New Year’s Eve is celebrated as it is all around the world – with revelry late into the night with friends. Of course, this being Greece, expect a little extra verve, with plenty of music and dancing, and everyone dressed in their absolute best. The late-night New Year’s celebration takes its name from French, but it is all Greek in style. 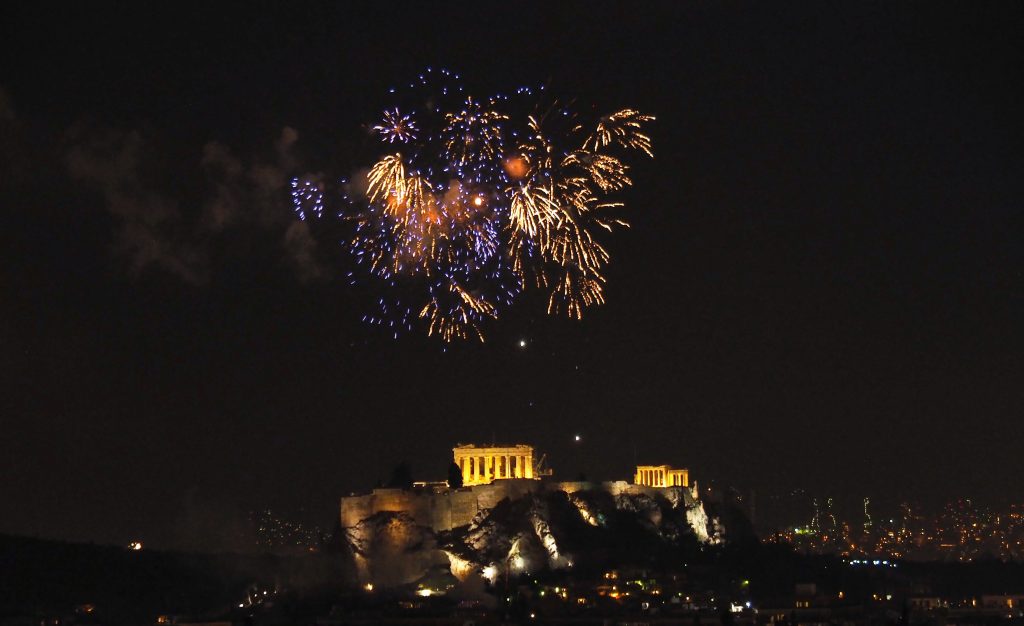 We hope that this post gets you into the festive spirit. Do you have any similar traditions in your home country?