The Lake Towns of Northern Greece 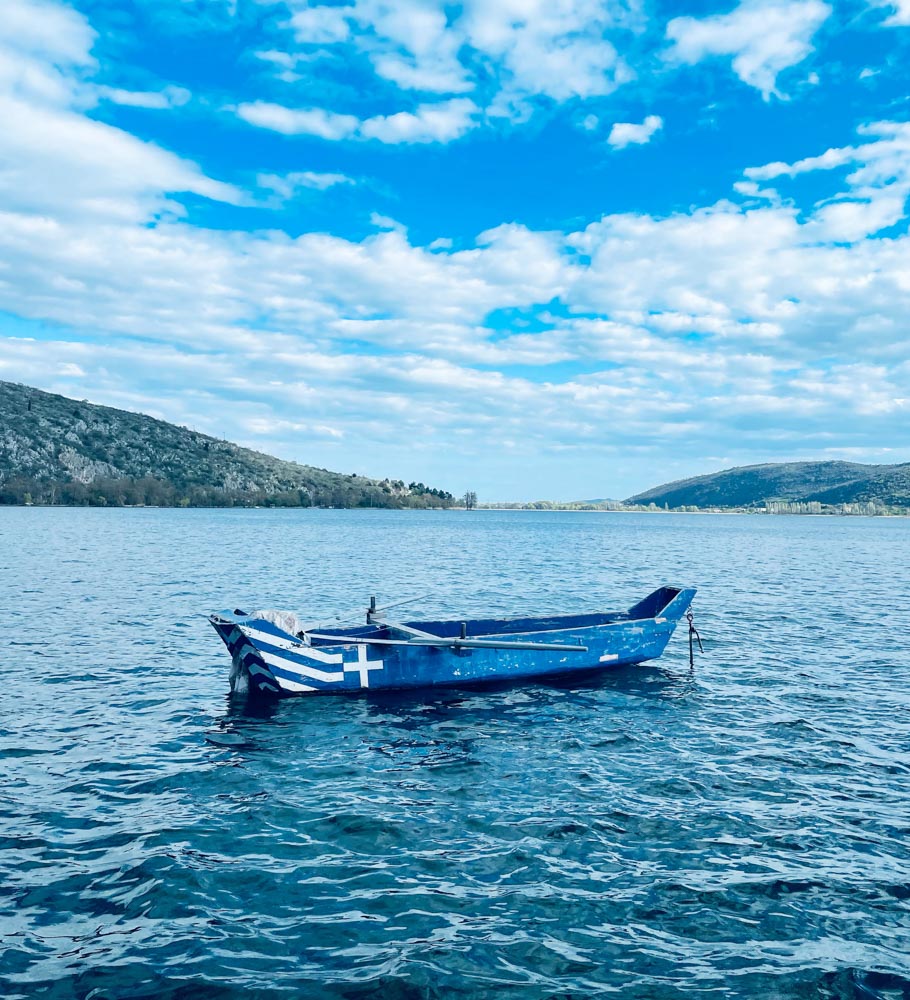 Northern Greece is a woodland paradise. It’s filled with glassy lakes- each with its own cultural heritage, biotopes, wildlife, and scenery. Here are three unique Lake Towns and their surrounding regions that unite history, culture, and abundant natural beauty.

Kastoria, the Gem on the Lake

Kastoria is one of northern Greece’s most famously beautiful towns. Built like an amphitheater on the slopes of the peninsula on shores of the magnificent lake Orestiada, Kastoria combines absolute serenity with aristocratic elegance, making for a fine destination in any season, but the cooler months perhaps most especially. 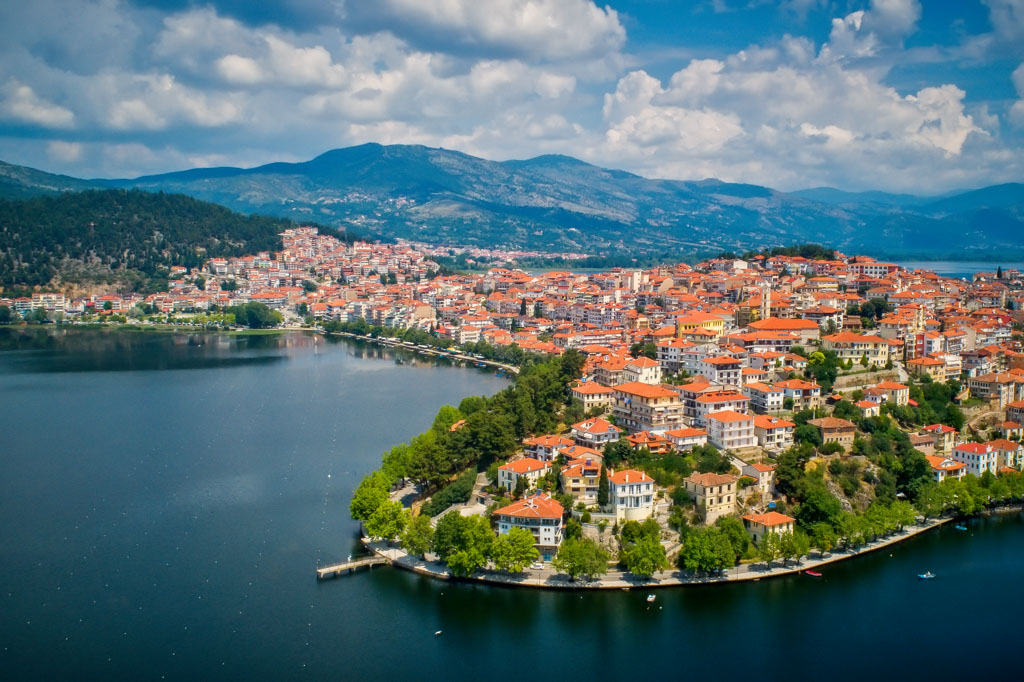 The lake itself is reason enough to visit. Reaching a depth of 50 meters, it is home to some 200 species. Lake Orestiada is rich with fish – 14 species including rainbow trout perch, and the Prussian carp. One will see fishermen out at dawn in the mist. It’s also an absolute delight for the birdwatcher- some 200 species such as the Dalmatian Pelican and the pygmy cormorant, as well as many species of owl and all nine of the graceful heron species that live in Greece.

The lake is also more than meets the eye; just 2 km north of the town of Kastoria is the famous Dragon Cave. A route of some 300 meters leads through chambers decorated with stunning stalactites and stalagmites. But that is not all – the Dragon Cave also features seven underground lakes. It’s a place of drama and mystery, truly a natural wonder. 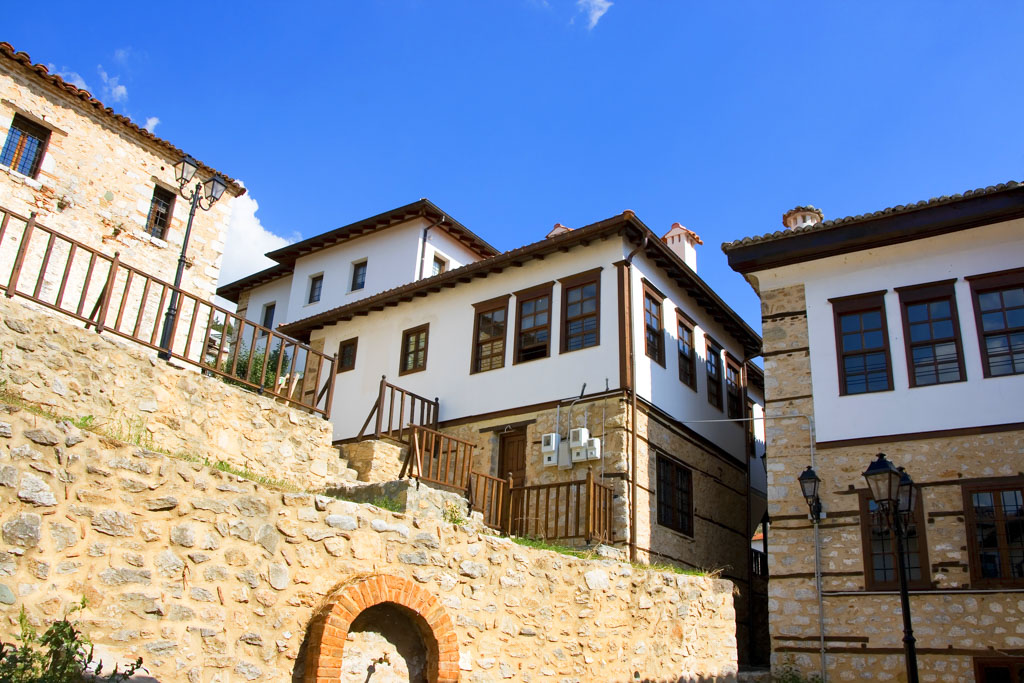 Kastoria became wealthy in the fur trade, and you’ll see the trappings of that wealth in the “Archontika” – the aristocratic mansions – which fill the two most charming neighborhoods. Doltso dates from the 17th and 18th centuries. Some of the mansions are now the homes of museums – the Folk Art museum is in the Neratzi Aivazi mansion, and the Emmanouil mansion lodges the Costume Museum. Regional costumes are a testament to the artistry and elegance of the region. 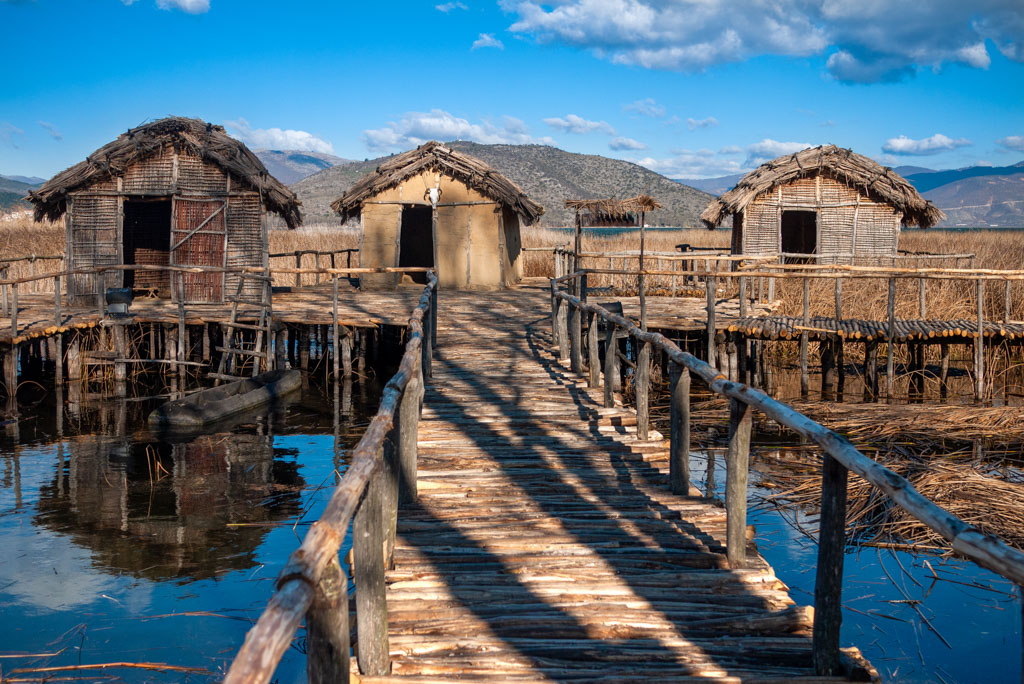 There is more history here, too. Just 8 km from town is the Neolithic settlement of Dispilo. Here among the discoveries was the Dispilio Tablet, inscribed with Linear A, and thought to date to the 6th millennium BC. Also exciting is the finding of one of Europe’s oldest musical instruments- a bone flute. Bringing the site most vividly to life are reconstructions of the original lakeside huts of the prehistoric settlement.

Lovers of lakes will also very much enjoy Florina. This famously atmospheric region has six of them: Vegoritida, Petron Lake, Zazari, and Ximaritida, as well as Mikri and Megali Prespa. Abundant flora and fauna enliven one of Greece’s most famously picturesque landscapes. 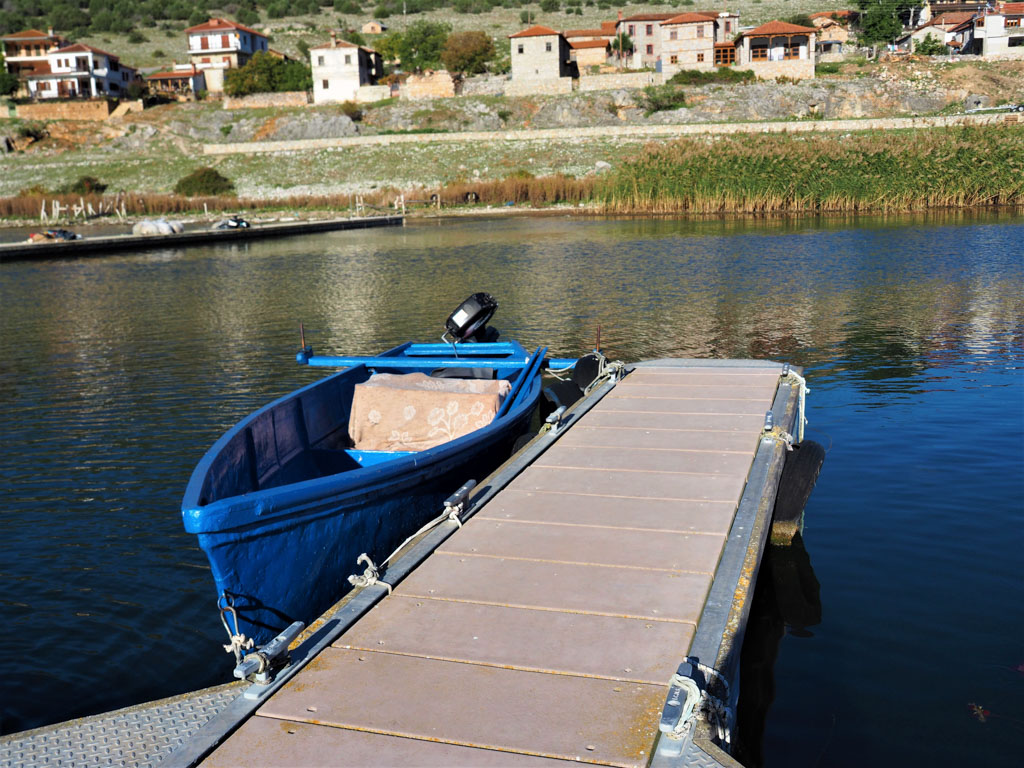 Florina, the main town of the region, was joined at the end of the 19th century to Thessaloniki by rail, giving it prosperity and perhaps a small touch of the cosmopolitan. This lovely town has a river running through it – the Sakoulevas – filling the air with a peaceful sound. Museums and artists’ workshops line the riverbanks. Other highlights of the town include the old Turkish Baths, and cinephiles will enjoy seeing the house of Voyiatzis, where many scenes of the film “the Beekeeper ” – by the auteur/director Theo Angelopoulos – were filmed. The area in its tranquility was an inspiration for him. 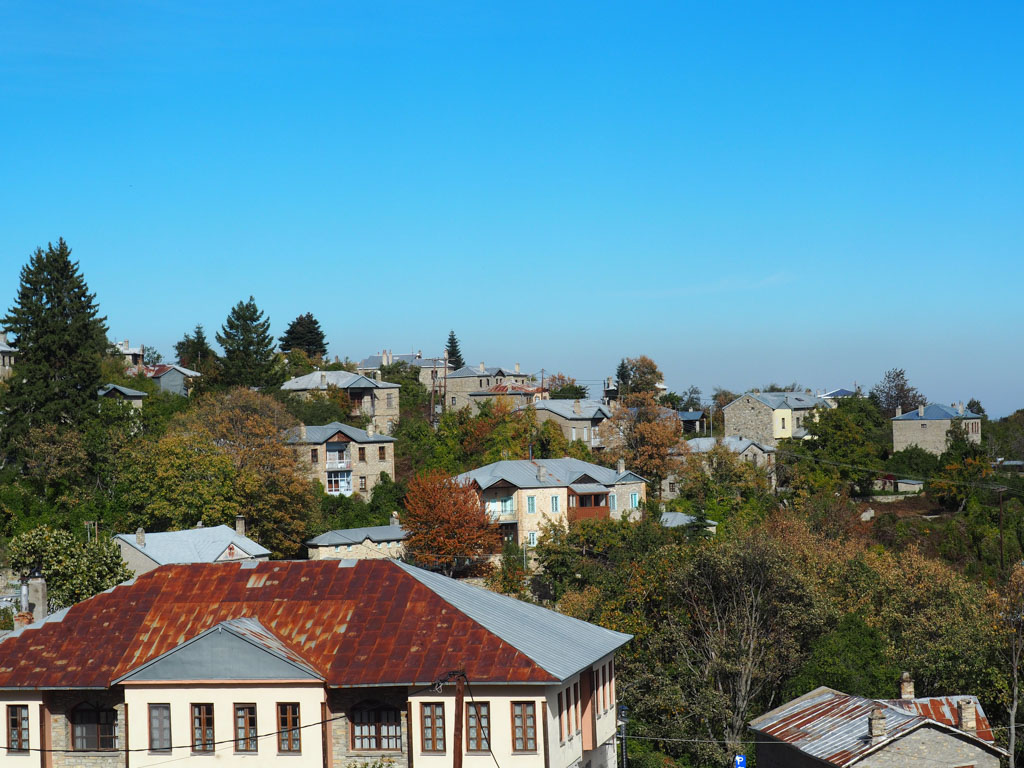 Nymfaio is considered by many to be queen among the towns of this lovely region. It often appears in lists of the “10 most beautiful villages in Europe.” Which is easy to believe; in addition to its superb traditional stone mansions, Nymfaio distinguishes itself by preserving both its cultural and natural heritage with great passion, earning it the Melina Mercouri UNESCO prize. New building must adhere to the same style, so the experience is complete. Tourism here is in the best taste, with respect for authenticity, and the elegance that befits the town’s aristocratic heritage. 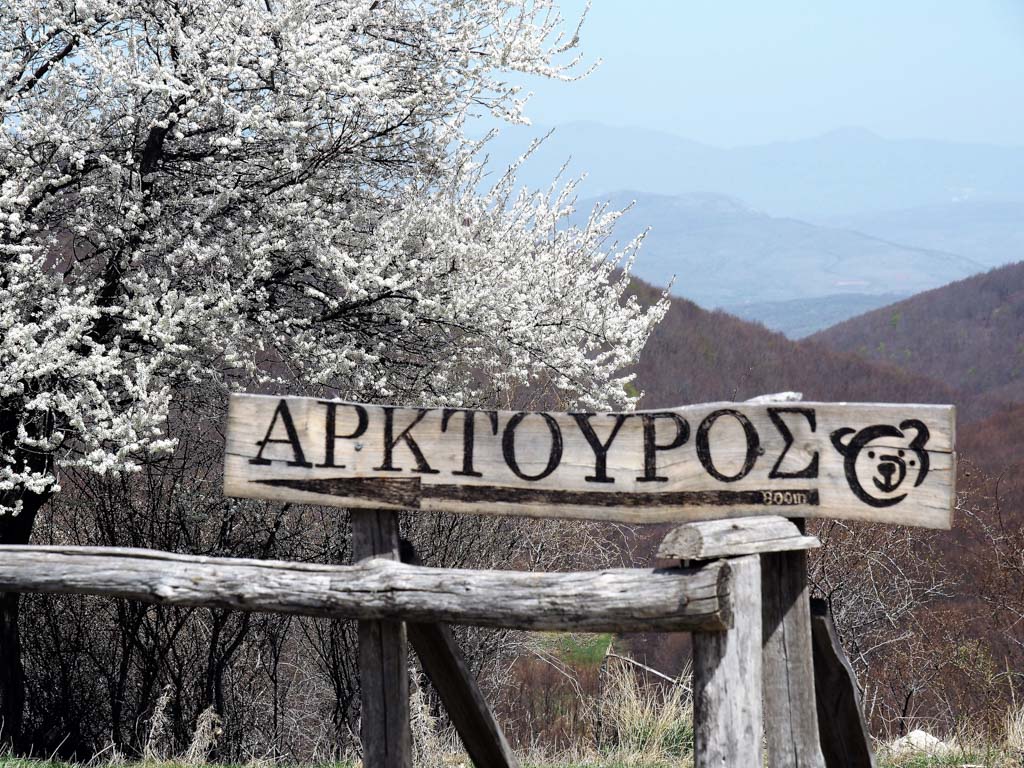 Lovers of nature and animal life will marvel at the excellent work of Arcturos. Dedicated to the protection of indigenous wildlife, focusing particularly on the brown bear, this innovative NGO operates a sanctuary in a beech forest. Their activities include increasing public awareness, and also breeding Greek Shepherd dogs distributing them for free to the sheep farmers of the hills in order to provide protection of flocks in a natural and non-invasive way.

These two lakes – “Mikri” (small) and “Megali” (large) Prespa are famous all over Greece for their serenity, beauty, and rich biodiversity. Mikri Prespa is at the heart of a National Park, a wetland protected by the Ramsar Convention, as well as a protected forest of ancient cedars by Mt. Devas. 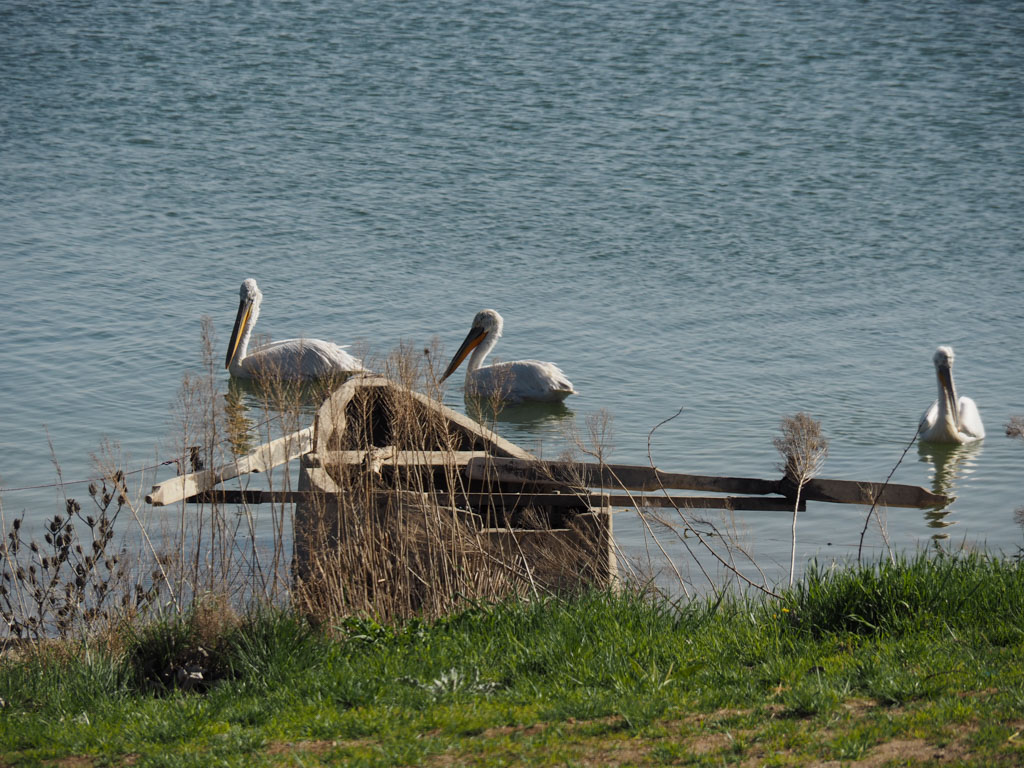 Birdwatchers will find this a paradise. Among the many species one sees, pelicans are in the spotlight; this is the largest breeding colony in the world for the Dalmatian Pelican, and indeed they’re a splendid sight. Half of the species in total of all Greece are at home in Prespes, and the lakes are home to nine endemic species of fish.

Boat rides in the serenity of the lake provide a wonderful opportunity to engage with nature in a non-invasive way, and for birdwatchers a unique experience.

The water of the lake is also used for the irrigation of a famous local crop – beans. The soil and altitude (900m) produce Greece’s finest and sweetest white beans, so uniquely delicious that they have a PDO. Hearty simple dishes such as ‘fasolada” – Greek white bean soup with tomato that is often served with pickled vegetables and smoked fish on the side – are transformed by their excellent quality. It’s a wonderful simple meal after a morning of hiking and boating.

The Hermitages of Prespes are a cultural treasure. During the Ottoman occupation, monks built these small monastic structures in this remote and contemplative location. Unique rock frescoes dating from the 14th-16th centuries add to the interest. They are reachable on boat tours leaving from the bay by the village of Psarades, on Megali Prespa.

The Lakes of Northern Greece

Have you ever visited this lovely corner of northern Greece, so rich in wetlands, wildlife, and traditional architecture? It is also steeped in history, from the Neolithic period to the Byzantine era. The lakes of northern Greece and the beautiful towns of the region are truly a lovely destination.