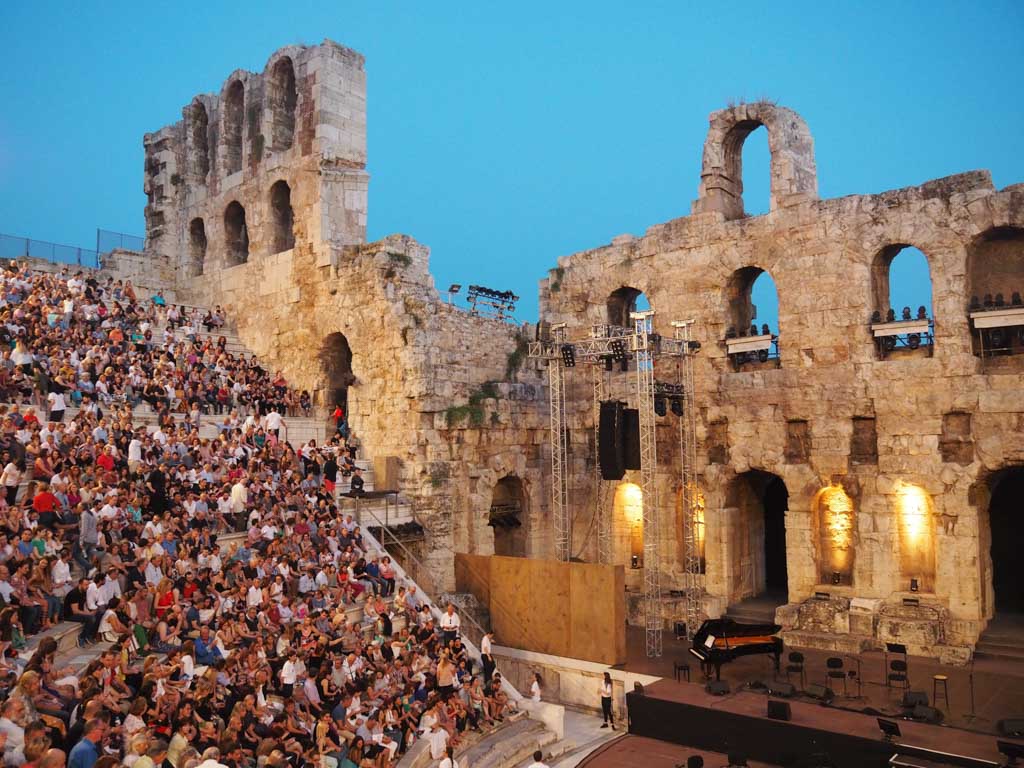 Summer in Greece is about so much more than the stunning beaches, the archaeological sites, and the incomparable landscapes. Besides being the season of long days under the glorious Mediterranean sun, it’s also the season of exciting nights of music, dance, cinema, and – this being Greece – of course theater. Summer is the finest cultural season in Greece, with a number of world-renowned international festivals celebrating the arts. And they celebrate them at some of the world’s most magical venues, many under the brilliant moonlight. Here is a look at some of the highlights of the Contemporary summer festivals.

The premier cultural festival of the Greek summer, the Athens and Epidaurus festival boasts a serious pedigree. Artists of worldwide acclaim have graced the ancient stages of this prestigious international festival over the decades. Some of the highlights since the festival’s inception in the middle of the previous century have included performances by Maria Callas, Leonard Bernstein, Margot Fonteyn, Ruldolf Nureyev, the Alvin Ailey American Dance Theater, and Martha Graham. 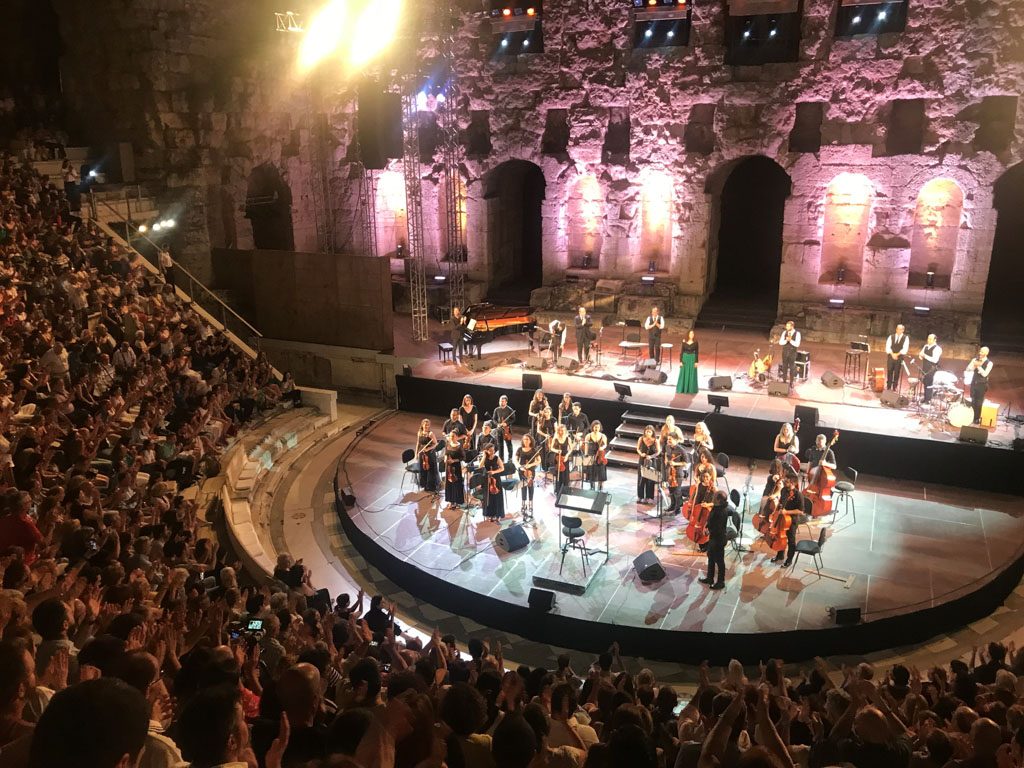 With the principal venues being the historic Herodes Atticus Theater (2nd century AD) at the base of the Parthenon and the magnificent theatre of Epidaurus (4th century BC) at the Asclepion, the settings alone add magic to the uniqueness of the audience’s experience, and rare inspiration to the artists. The Theater of Epidaurus was originally built to host dramatic performances as, in their wisdom, the Ancient Greeks thought that drama is essential to the spiritual health of the patients. Indeed anything one sees here in this magical setting is certain to transport the soul today as well. 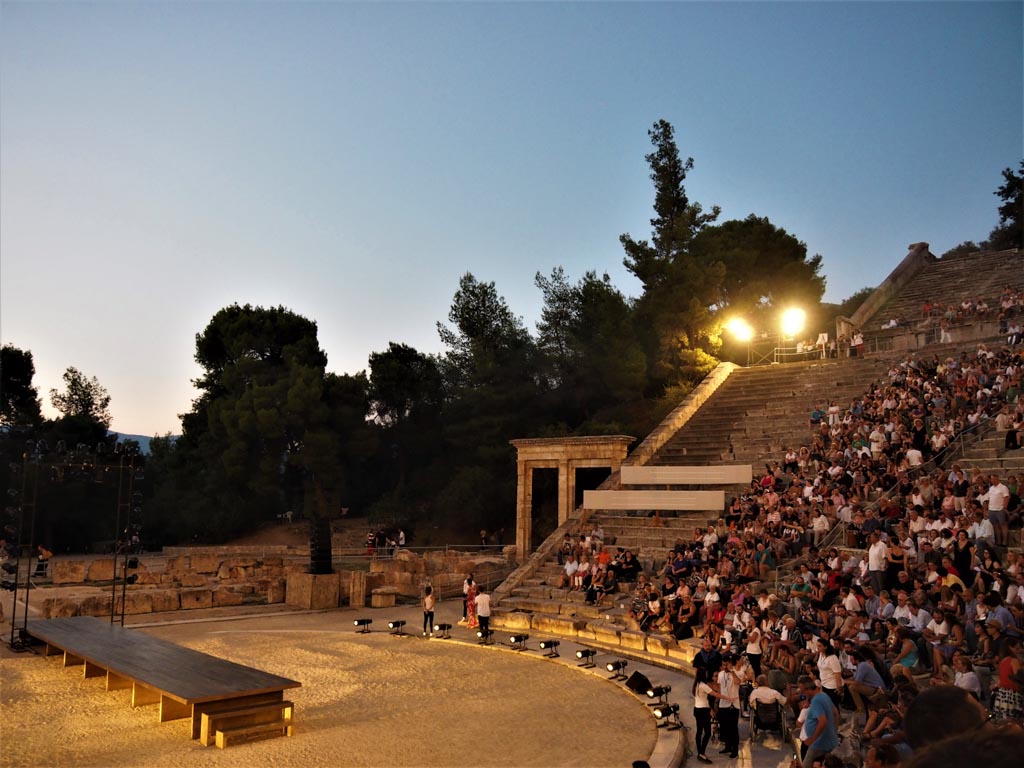 Over the years the festival has spread out over more venues – the Peiraios 260, the Cultural Foundation of the National Bank of Greece, a public school, a park, and a classic small cafe in Athens – in short, there is always the uniquely ideal venue to capture the essence of the performance. And the scope of the performances, too, has greatly expanded, from highlights of classical theater to opera, to avant-garde performances encompassing a variety of forms of artistic expression. Some highlights of this year’s program include the world premier of the avant-garde interpretation of Oedipus – set in contemporary Athens – by director Thomas Ostermeier, the Opera/Performance Sun & Sea, winner of the Golden Lion at the Venice Biennale of 2019, and Chronotopia – a 2-day event of pioneering electronic music in collaboration with the Goethe Institute and Berlin’s CTM Festival.

This is a wonderful way to experience some of Athens’ most unique spots – both famous sites, and those with a distinctive local character. A performance at Epidaurus – an easy trip from Athens – is truly the event of a lifetime.

The largest film event in Athens in the summer, the AOAFF is a natural extension of a favorite Greek summer pleasure – the “Therino” Cinema. Greece has a long tradition of summer cinemas under the stars, and this festival brings the long-popular pastime into an artistic and innovative direction. 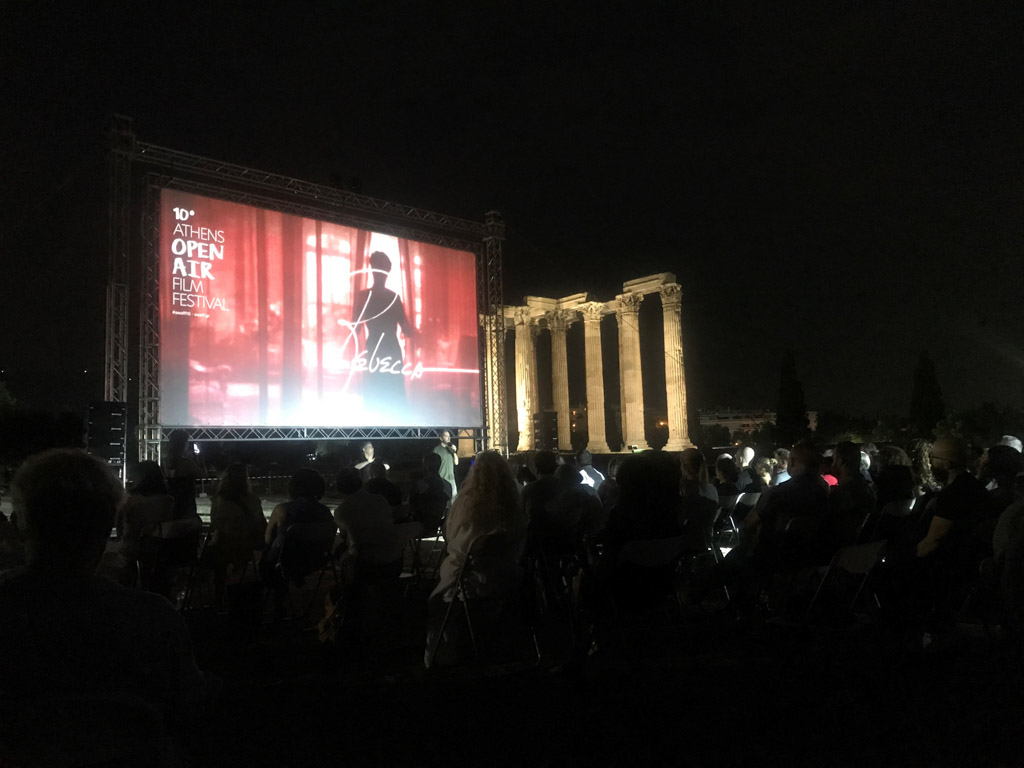 Taking place at a number of surprising venues – parks, archaeological sites, beaches, city squares – the urban landscape is transformed into an innovative backdrop. What’s on the program? Indeed, something for everyone. Innovative and avant-garde cinema and the most interesting contemporary offerings join great cinematic classics spanning the decades. This years’ highlights include works by Wong Kar Wai and Spike Lee, and legends of the past such as Alfred Hitchcock and William Wyler.

The Athens Open Air Film Festival is truly one of the best ways to enjoy Athens like a local.

The Cyclades, as many travelers to Greece now, is not solely defined by the pristine sugar-loaf white and blue houses and bright blue shutters of postcards and dreams. You’ll see plenty of this pristine vernacular style on Mykonos, Tinos, and Santorini. But Syros, the Capital of the Cyclades with its sumptuous city of Ermoupoli, is all about grand neoclassicism. This Classical Music Festival takes place at the famous Apollo Theater of Ermoupolis, a lavish building of 1864. When it opened, it was celebrated as one of the finest theaters of the entire Eastern Mediterranean. The interior is likened to a miniature of the grand Teatro alla Scala of Milan. 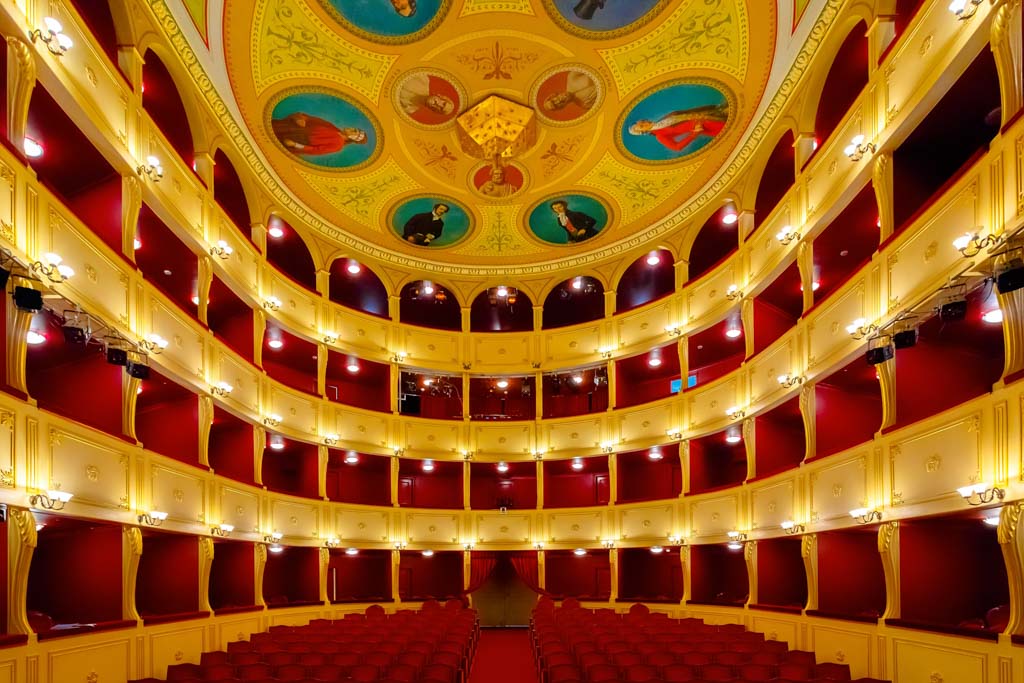 An additional venue is the Mega Gialos Amphitheatre, an outdoor venue with a view of the sea. The program features works by both International composers and Greek classical composers. The 2021 performances included Vivaldi’s Four Seasons, by a chamber orchestra featuring members of the Athens State Orchestra, and a quartet performing works by Turina, Skalkotas, and Borodin.

At the International Classical Music Festival of the Cyclades, you’ll experience a completely different aspect of the Cyclades, albeit one that is absolutely historically authentic, connected to the noble history of the island.

Thessaloniki, Greece’s second largest city and the gem of the north, has a wonderful cultural scene. The summer is the season for the Forest Festival, aptly named for the venue, the wonderful modern amphitheatre the “Theatro Dassous” (Forest Theatre), set among the fragrant pines in the cool air of the Sheikh Sou forest, overlooking the city.

Highlights of this year include performances of the famous tragedies Orestes and Iphigenia at Aulis. Contemporary offerings include concerts by the popular Greek artists Alkistis Protopsalti and Michalis Chatziyiannis, as well as Matoula Zamai, and the extremely popular Villagers of Ioannina City playing experimental Rock.

Thessaloniki is within easy reach of some of Northern Greece’s most fascinating archaeological destinations, such as Pella and Vergina, making a visit to the Dassous Festival an excellent opportunity for a rich cultural exploration.

Have you ever enjoyed any performances on a visit to Greece?